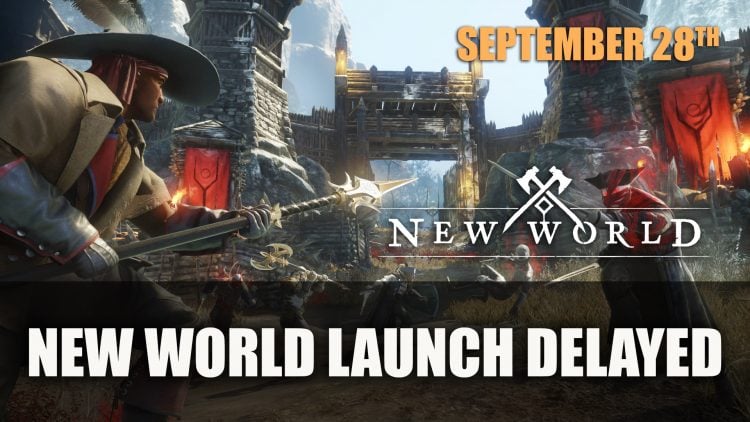 Amazon Games Studio has announced they will be pushing the launch of the upcoming MMO New World.

Amazon’s upcoming MMO New World was previously scheduled to be released at the end of August, but the developer has now announced the game will be launching on September 28th.

This isn’t the first delay that the game has seen, and the news comes after the closed beta which finished this week. In the post on the official Twitter account, Amazon explains that the delay is in “pursuit of quality”, acknowledging that fans will be disappointed but explaining it will be to “deliver you the highest quality game possible at launch”.

The post also mentions the feedback they gained from the closed beta which means they will need “a few extra weeks to smash bugs, improve stability, and polish the game”.

A message from the New World team. pic.twitter.com/oAZdK7dxTn

New World was met with a huge amount of interest, with more than 25 million hours clocked from those who took part in the beta. If you’re curious to know what we thought you should check out our latest video New World Review: Gameplay Impressions After 180 Hours Played (Closed Beta).

Looks like Adventurers played more hours than we thought! During the Beta we actually had more than 25 million hours played.

? Thanks again for participating in the Closed Beta.

New World is an MMO Action-RPG all about the Age of Exploration, with a heavy focus on crafting,  as players attempt to colonise Aeternum, a mysterious island. This MMO will have massive battles where up to 100 players can join, taking combat to the field. Join companies, build strongholds or go it alone in solo. The game has a classless system, what you wield in terms of Weapons will determine your abilities through Weapon Mastery.

New World will now launch on PC on September 28th.

For more news find it here in Grime Launch Trailer Released and Nier: Automata And Ghostrunner Are Being Added To Playstation Now.