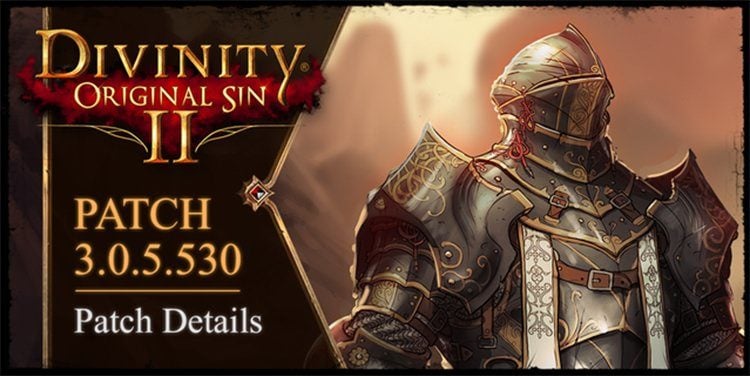 Larian Studios has released a patch for the PC early access version of Divinity: Original Sin 2. The patch will be automatically applied by Steam, but saved games will no longer be compatible with the new version. Tab over for the detailed patch notes and read on for more.

Players who are in the middle of a game will be able to revert back to an old version of the game by taking the following steps:

Following these steps will ensure that Steam will not update the game, allowing you to finish any epic adventure you were in the middle of.

Furthermore, they released a developer update video that went over the recent comings and goings at Larian Studios.

Larian has been diligently going over the data collected on the activities of players in the early access who have opted in to send info, to better understand the game and how it can be refined going forward. To this end they’ve compiled an infographic that shows everything they’ve learned about player choices so far. 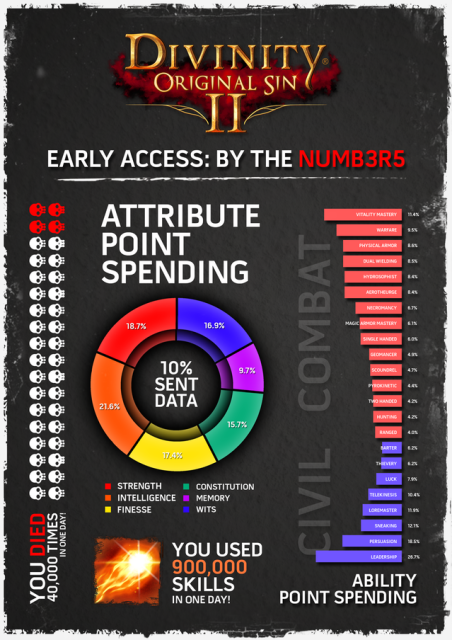 As we can see in the infographic, players are making decisions across the board as they relate to attributes, skills, and abilities during combat. Because of these insights we can expect even more balancing updates in the future.

– Repair hammer and identifying glasses are now consumed when used.
– Made switching to inactive characters in combat possible (not for combat action but for inspecting/inventory/…).
– AI can now find cover if it finds itself teleported to a place where it can’t escape
– Fixed wizard AI scripts where they would run towards the enemy but not attack.
– “Stolen” item tag gets removed when you put in the ‘Your offer’ tab while trading.
– “Stolen” item tag gets removed when their original owner dies.
– Tutorial tweaks.
– No longer showing invisible enemies when player clicks on their icon with a character-backstabber.
– Tactical Retreat no longer allows jumping outside the skill range.
– Party members are now blue, default circles for Arena, turn/status console use relationship based colors.
– When you have the Zombie talent, necromancer lifesteal no longer damages you.
– Added special warning when your movement speed is 0 from a status.
– Character will no longer start dialog unless close enough.
– Weapon-based skills now use elemental bonuses on the weapon.
– Hail Strike now creates 3 projectiles (down from 4), costs 2 AP (up from 1AP).
– Rage now lasts 1 turn (down from 2), reduces resistances by -100% (down from -25%).
– Levitate is now a Stealth skill (doesn’t break sneaking or invisibility).
– Shields now provide Magic Armour in addition to Physical Armour.
– Statuses Bless and Curse no longer bless\curse surfaces that the affected character walks into. (Skills Bless and Curse will still affect surface once.)
– Wet, Chilled and Frozen now remove Holy Fire.
– Fixed irst Aid not healing character when it removes negative status.
– Decreased damage of Crippling Blow.
– Decaying Touch damage slightly buffed.
– New item combinations for empty flasks and mushrooms
– Assigned new 3D objects and icons to potions.
– Added a lot of new item names to item generation.
– Fixed flags and properties of a lot of roots (e.g. you can now interact with desks and books).
– Made some roots stackable.
– Updated/fixed descriptions for some roots.
– Created some new descriptions for roots.
– Removed abundance of items in an area (e.g. axes or hammers all over the place in one small area, etc).
– Removed some placed armour pieces because they didn’t belong there.
– Reassigned treasure tables on items and characters.
– Reassigned levels on corpses, items and characters.
– Placed items now have a unique name and description.
– Created unique knife for Griff.
– Fixed value of valuable items (e.g. pearls).
– Increased level of Ancient Sword because by the time you reach it, you are not level 3 anymore.
– Treasure table updates:
– more containers now use the same distribution (refer to GenericContainer) which makes balancing easier;
– generic container was dropping junk too often;
– generic container was not dropping enough gold;
– fixed: generic enemy was not dropping armor;
– junk will be dropping a BIT more gold ;
– junk was referring to the TOOL category twice;
– stacks and sacks should not always contain something;
– redistributed RewardTiny table;
– junk should drop less cloth armor;
– FTJ specific reward could select gold twice.

– Fixed a crash that could happen when requesting a character icon in a dialog.
– Fix crash when the status Fear was set on an item.
– Fixed a crash that happened when changing certain graphical settings while the paperdoll was showing (e.g. toggle between shadow rendering).
– Fixed crash for items in source surfaces.

Divinity Original Sin 2 is in early access right now for PC and is slated to release in full sometime in the near future. Check out our feature article on how this game along with others are helping to revive the CRPG genre.