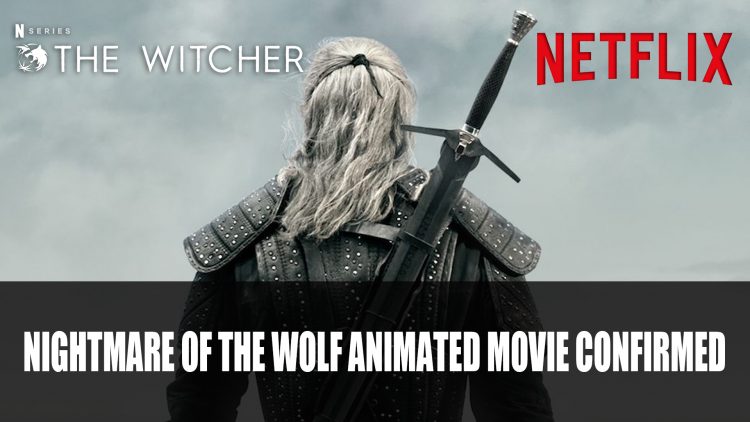 Netflix confirms that animated movie for The Witcher is coming to the streaming platform after it gets listed on the Writers Guild of America.

Netflix Confirms The Witcher: Nightmare of the Wolf Animated Movie

Recently a new title was listed on the Writers Guild of America and Netflix has confirmed the project in a tweet, that The Witcher: Nightmare of the Wolf is currently in development.

Set to be an animated film, The Witcher: Nightmare of the Wolf is being developed by Lauren Hissrich the showrunner from The Witcher Netflix series, and Beau De Maya as well as Studio Mir. This is the same studio that worked on The Legend of Korra.

The first season of the Witcher launched last month and is currently on track to be the biggest season one release on Netflix, racking up 76 million member households in just the first four weeks. To put that in perspective, The Crown has had 73 million households choosing to watch the show since it’s launch in 2016. So it’s no surprise another Witcher project is underway due to it’s formidable impact. Not only gaining quite the number of viewers, but sparking an influx of new players picking up the Witcher 3 on Steam, gaining more concurrent players than its original launch.

The rumors are true, a new Witcher story is in the works! The anime film, The Witcher: Nightmare of the Wolf, will take us back to a new threat facing the Continent. Brought to you by the Witcher team @LHissrich and @BeauDeMayo, and Studio Mir the studio behind Legend of Korra.

The Witcher series is based off the Polish fantasy novels by Andrej Sapokowski, and following the success of the show, has now got the publisher Orbit Books reprinting 500,000 copies. So good news all around for Witcher fans in a number of mediums.

#Witcher fans, we have heard you loud and clear! We’re printing *more than half a million books* to meet demand for Andrzej Sapkowski’s New York Times-bestselling series!

Thank you for helping us make #TheWitcher a publishing phenomenon!https://t.co/GtBtEAOkzM

You can catch season one of The Witcher on Netflix. The Witcher 3: Wild Hunt is available to play on Playstation 4, Xbox One, Nintendo Switch and PC. Alternatively you can watch our playthrough on the Fextralife Twitch channel which has basically turned into Gwent fest but has been highly entertaining.

For more Witcher 3 news be sure to read next Witcher 3 Gains More Players Than At Its Original Launch In 2015. If you’re currently playing through Witcher 3 you might want to check out our The Witcher 3 Wild Hunt wiki.