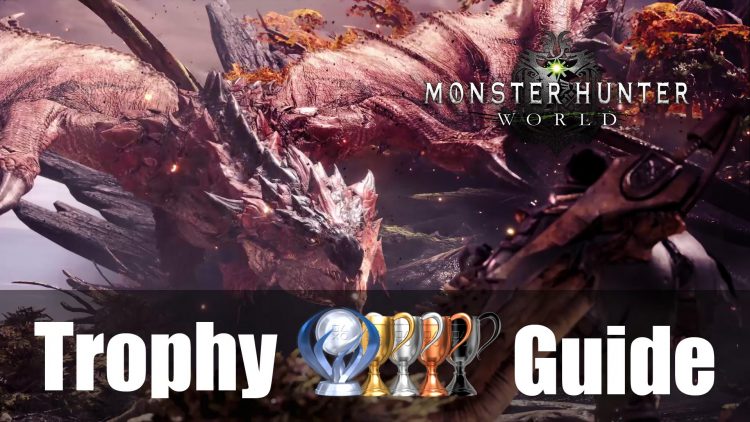 Capcom’s Monster Hunter World trophy and achievement guide and roadmap for completionists to get the Platinum or 100% the game. Join my hunting party as we dissect the 50 trophies players may obtain.

We’ll update this section as soon as more information is available on release. You can find lots of information on the Monster Hunter: World Wiki.

Conqueror of the New World

Welcome to the New World

Earn the right to take on two-star assignments.

Obtained after slaying the Great Jagras.

Nothing Stops This Commission

Earn the right to take on three-star assignments.
Obtained after slaying the Pukei-Pukei.

Earn the right to take on four-star assignments.

Obtained after slaying the Anjanath.

Earn the right to take on five-star assignments.
Obtained after slaying the Legiana.

Diverge Zorah to the Ocean.

The Empress of the Highlands

Earn the right to take on seven-star assignments.

One Shall Stand, One Shall Fall

Earn the right to take on eight-star assignments.

Solve the mystery of the Elder Crossing.

The Hunter’s Life for Me

Step into the Arena

Head to the gathering hub and undertake an arena quest. Arena quests are meant to be done in a team of two.

Nowhere to Go but Up

Setting Up Camp: Ancient Forest I

Setting Up Camp: Wildspire Waste I

Setting Up Camp: Elder Recess I

The Art of Camouflage

Escape the Jagras pack by hiding in some shrubs.

Unlocked during the tutorial.

Angling for a Bite

Can be done as soon as players decide to go fishing.

Can be done as soon as players have raw meat to cook.

The Bigger They Are…

Use Insect Glaive if players haven’t mount a monster.

Capture a fish known as “the living fossil.”

Fish a Petricanth in Rotten Vale.

Research points are obtained by:

Will obtain naturally by playing or players can sell surplus monster materials to reach the goal faster.

Move into an upgraded room.

Obtained by progressing the story.

After players have met wild Grimalkynes, players’ Palico will learn how to convert small monsters. Once they do that once, this trophy will pop up.

Get a Palico Gadget to level 10

Research everything about almost every monster.

Max out the research level on all possible monsters. Collecting their tracks and hunting them will fill the bar.

This becomes available after players beaten the story. Players will have to hunt a tempered monster they have a purple outline in the quest screen.

Record your first minature crown in your hunting log.

Obtain a miniature crown for 10 or more monster in your hunting log.

Obtain a miniature crown for almost every monster in your hunting log.

Record your first giant crown in your hunting log.

Obtain a giant crown for 10 or more monsters in your hunting log.

Obtain a giant crown for almost every monster in your hunting log.

To capture a monster players must use 2 tranq bombs on a low health monster then set up a pitfall trap or shock trap to ensnare the monster.

Fire an SOS flare for the first time.

Fire an SOS Flare during play to unlock this trophy; can be done early if players like.

I Am the Reinforcements

Respond to an SOS flare, and help complete 10 quests.

From the bulletin board select “join a quest” then join SOS 10 times.

Complete a quest via multiplayer

Play with a friend to unlock.

Play with a friend 100 times to unlock.

Play with others online and obtain their guild cards.

Naturally playing the game will allow players to reach hunter rank 100. For a faster way farm the following quests:

Check out even more Trophy Guides!