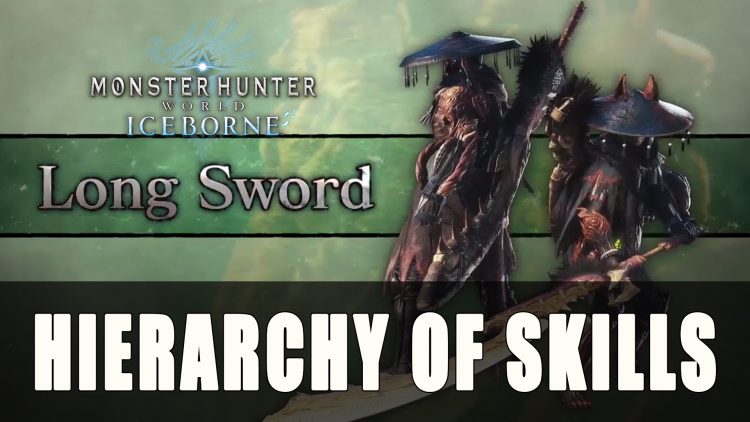 It’s time to wade through Monster Hunter World Iceborne’s plethora of skills and determine which ones are valuable. I’ll discuss my thoughts on a few offensive, defensive, utility, and support skills for Longsword users.

The Hierarchy of Skills refers to giving one skill a higher priority than another and it is something a lot of Hunters will find themselves conflicted with. There are several skills that are better than others, but it’s also important we look at those skill types which impacts their worth. Below you find each skill type listed grouped under Offensive, Defensive as well Utility and Support Skills.

Players can check out all the possible Skills on the wiki but for this piece I’ll be going over skills that are talked about most. For most DPS meta builds its important to run:

Firstly, hunters want to increase their critical % by slotting Critical Boost, Weakness Exploit, and Critical Eye. I could tell you to run the max level of each of them but it would be too general. You want to hit 50% affinity before weakness exploit kicks in, so with it your affinity will be 80% and 100% when hitting weakspots and tenderized weakspots.

After that, if your weapon needs more sharpness you’ll need to slot in some Handicraft. Purple sharpness is kinda on the fence of value since it requires several decorations commitment. Agitator is now run in sets due to the uptime of the skill, due to monsters’ prone to enraging. Attack Boost comes in next with peak performance last due to its variable uptime.

These are the important meta skills for most melee but in particular for Longswords at this time. Bow users have a different list of Skills they must prioritize like True Critical Element/Critical Element, Elemental Attack Up (Water, Fire, Electric, Ice, Dragon), Stamina Surge, Constitution, Spread/Power Shots to name a few.

Yes, in theory if you never get hit, you don’t need any defensive skills. But, in practice players get hit, some more than others. It is up to the player to identify if they fall under that category and if defensive skills can assist them.

If using Defensive skills, there are some skills that are better than others. For example, Defense Boost is highly inefficient to run due to how damage is calculated. For each level of Defense Boost it’s better to use Divine Blessing and Health Boost. Both Health Boost and Divine Blessing are commonly found decorations especially in level 4 decorations. You may see Recovery Up being use more in meta sets due to builds having Peak Performance and Health Augment on weapons to improve the efficiency of those builds.

Earplugs is a skill that players like to have that most players always give them flack for. Most will reply with “Just roll through the roars, foresight that stuff, position yourself better, etc”. While those replies are valid, sometimes the best advice just doesn’t click despite them trying. So if you still want to run Earplugs then you should understand what Skills you should give up in order to have them in your build. It may not be efficient but if it prevents you from carting and failing the quest, I’ll be okay with it.

There are also “support” skills that lots of players aren’t too keen on. Some say it promotes poor gameplay and is actually creating bad habits for players. While others say anyone can heal with Lifepowder and Dust of Life so it makes support oriented teammates redundant. Ultimately, I’m not that thrilled to have a pure support since this isn’t an MMO, but being a flexible hybrid could work. Some skills that would help: Divine Blessing, Health Boost, Free Meal, Wide Range, Speed Eating, and if there is some space add offensive skills.

It’s difficult to place a specific value on each skill unless we look at them very narrowly and only go for the most optimal skills which are done for meta sets. Some Skills are deemed better than others, while some synergize with other skills well, and some are just kinda out there. It’s up to the hunter to tailor skills to their playstyle and have some fun with it.

If you found this guide useful be sure to check out our Monster Hunter World Guides section for more useful tips and tricks.