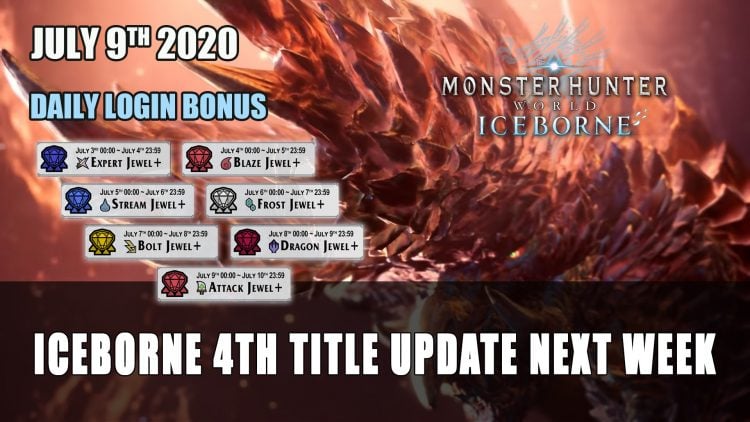 Capcom has announced that the fourth free title update for Monster Hunter World: Iceborne will be releasing July 9th, plus daily login bonuses.

Capcom recently announced that the the fourth free title update for Monster Hunter World: Iceborne would be releasing this July, they have now pinned down the release date which is July 9th.

Along with this announcement Capcom also shared that the Event Quests for Monster Hunter World Iceborne would be returning to its original schedule, starting July 8th. The Event Quests schedule will be updated on the official website and in-game via the Notice Board located at the Gathering Hub on July 3rd.

Capcom will also be premiering the Dev Diary 6 to reveal gameplay and more according to their Twitter post. This will go live on July 3rd at 5:00AM PDT/1:00PM BST.

But that’s not all, to celebrate the update release you can gain daily bonuses by simply logging during the set times in the run up to the update. Bonuses include:

Alatreon is just the tip of the iceberg… 👀❄️

Tune into #Iceborne Dev Diary 6 for the gameplay reveal and more!

The fourth update brings the “Blazing Black Dragon” Alatreon to Iceborne, a fan favourite that appeared in Monster Hunter 3. In previous Monster Hunter titles Alatreon is capable of utilising a number of elements including Thunder, Ice and Fire attacks. Along with a new monster comes new weapons armor and more, which was outlined in the last title update roadmap. New monsters and further updates are planned but no release window has been announced yet for further content.

Monster Hunter World Iceborne is available to play on Playstation 4, Xbox One and PC.