Monster Hunter World (MHW) features 14 different weapon types, with the Hunting Horn being one of them. In this Guide we’ll take a look at exactly how to use this Weapon to its fullest, as well as show you some things you may not know about it. If you’re new to the game or you are a veteran of the franchise and just need a quick refresher, this Guide is for you.

The Hunting Horn is a weapon that many players overlook due to its less than stellar moveset and an apparent lack of special attacks. Besides its hard hitting attacks, which deal Blunt Damage (which is great for Stunning monsters), the Hunting Horn is used to buff the group via Melodies. Melodies vary from Horn to Horn, enhancing characteristics of the group such as attack speed, some cc immunity, health boost and more. In short this is the go-to weapon of the team player.

Beginning players utilizing the Hunting Horn should not worry too much about combos which are rather straight forward, but instead focus on the the Notes that their particular Horn plays and what the various combinations do since these Notes have a tendency to dictate your attack patterns anyway.

is Note 3. Attacking with them in various orders will queue up Melodies otherwise known as “Stocked Melodies“. You can stock up to 3 Melodies at once and players can play any of the three by pressing either

. Note that if you play a Melody and don’t do anything (other than moving) you will play all 3 Melodies in succession.

Examples of Melodies and their notes: 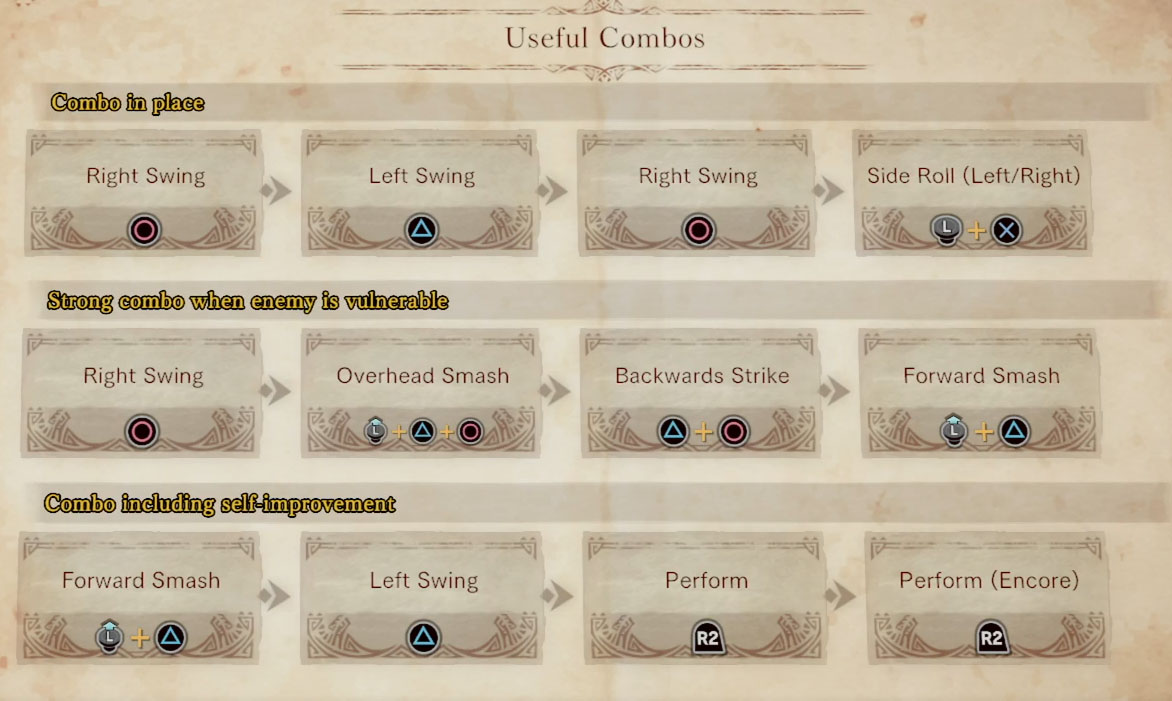 Some useful attack Combos, but it is best not to focus on them until you have the hang of playing Melodies.

As mentioned above you can stock up to 3 Melodies at once, but if you don’t use them they will be replaced by the next Melody you play one by one. Keep this in mind so that you don’t waste Melodies if you haven’t buffed yet.

Players wielding the Hunting Horn can also give themselves a buff called “Self-improvement“, which increases their movement speed, but doesn’t affect other players. Self-improvement is obtained by attacking with

again after playing a Melody to perform that same one again. This will either enhance that Melody, making its effect more potent, or will provide some other buff. Simple versions of each buff you cast will appear Green in the top right-hand corner, while the enhanced version will appear purple.

What a performance looks like. It goes on a bit longer than this but you get the idea.

The list of Melodies you can play with each Hunting Horn is listed on the top right-hand side of your screen when in combat, and in your inventory screen when selecting the weapon. Be sure to check these out to see what they are and what order you need to press Notes in.

When using the Hunting Horn you can see which party members are in range of the horn by the flashing icon next to their name on the left-hand side. If it isn’t flashing they won’t be buffed by your Melody. You can also see which buffs have been applied to these party members by looking at the icons just to the right of their health gauge. Be sure to pay attention to these to get the most out of your Melodies.

What a buff from a Melody looks like. You can see Romeo is flashing meaning he is in range and then you can see the sword icon appear next to his health bar, indicating he got the attack up buff.

When attacking with the Hunting Horn the game will show a list of the Notes you have pressed in the top left-hand corner of the screen and suggest other Notes to you to fill out your Melodies. Because the Hunting Horn attacks slowly, you will have time to read these, so get in the habit of doing so until you have them memorized.

The Hunting Horn deals a good amount of Blunt Damage so be sure to aim for the head of the monster you are hunting to try and Stun it. You don’t have the combo power of the Hammer, but you can buff your group instead.

Try to aim for the head when using the Hunting Horn to take advantage of the Stunning effect from Blunt Damage.

Lastly, the initial shockwave created by the Hunting Horn “performance” has high attack and Stunning power, making the move completely viable as an attack in its own right. It isn’t always the safest idea, but use it if you need it.