Monster Hunter World features 14 different weapon types, with the Sword and Shield being one of them. In this Guide we’ll take a look at exactly how to use this Weapon to its fullest, as well as show you some things you may not know about it. If you’re new to the game or you are a veteran of the franchise and just need a quick refresher, this Guide is for you.

If you are new to the game or are a bit overwhelmed by the weapon types and their movesets then I strongly recommend the Sword and Shield until you get a bit of practice under your belt. It has a relatively small amount of moves, which don’t take long to learn, and allows for the use of items without sheathing your weapon (which no other weapon does). The Sword and Shield also has an extremely fast attack speed, allowing you to roll out of combos or Block if you made a mistake and got too aggressive, giving new players some leeway while they learn.

Basic Combos for Sword and Shield

To begin we’ll start with the Sword and Shield Moveset. 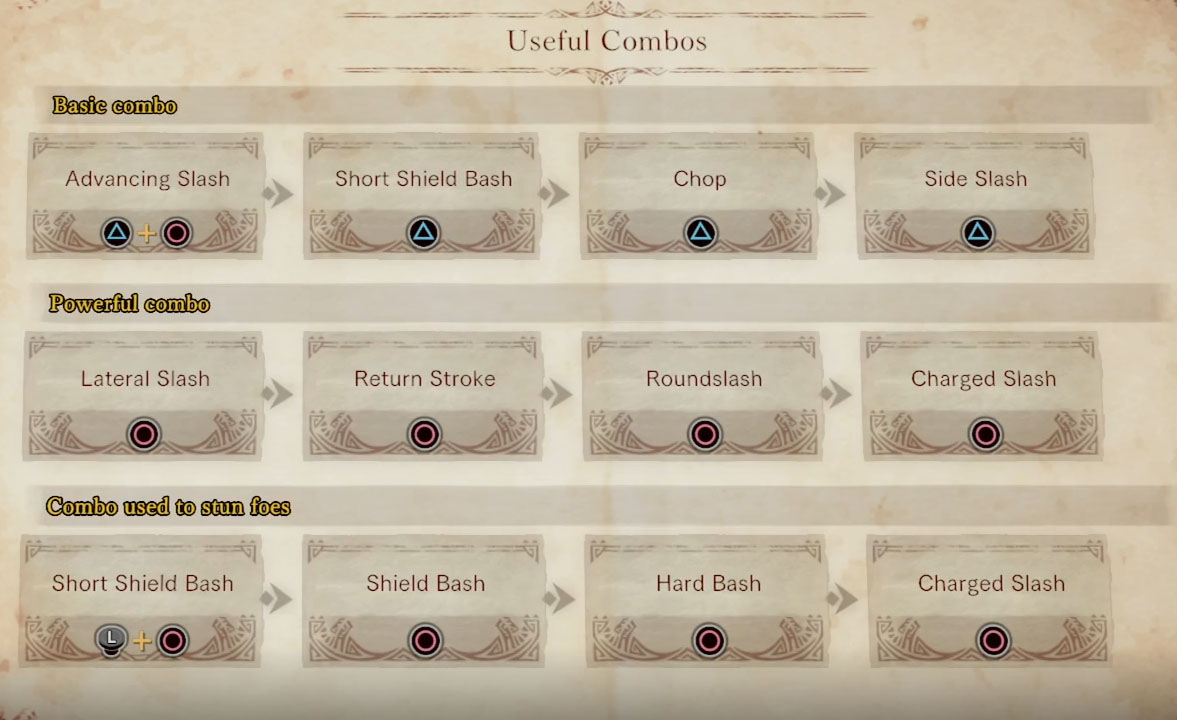 As you can see the Combos are pretty straight forward. This isn’t all of them, but it’s the majority.

If Monster Hunter: World follows the trend of previous games, Sword and Shield users can focus their efforts on efficient Elemental Damage builds that target the hunted monster’s weaknesses. The rapid attack speed of the weapon is excellent for inflicting status ailments.

When using Sword and Shied you can also do an enviroment-based attack, that varies based on the terrain you are on, by pressing

. These attacks do different things ranging from leaping at Monsters, allowing you to Mount them, to sliding underneath them, and is something you will have to play around with to fully master.

As you can see you don’t have to put your Sword and Shield away to Sharpen or use any other Item.

Learning to use your Charging Slash effectively is one of the keys to successfully playing this weapon. Learning how to pull off this attack smoothly mid combo and getting used to its timing are paramount. Also, being able to recognize if you should attempt to mount mid-air or go for the Falling Bash, will set you apart from other Sword and Shield users.

Charging Slash is easy to learn but the Falling Bash is harder to land.

Determining when to Block and when to Evade with his weapon is also important, and will help distinguish you from other players using this setup. Part of it is simply learning the moveset of the Monster you are fighting and the other part is knowing the limits of the Shield. Take some time and practice blocking and get a feel for how it works, because you do have to aim it, and test what you can Block and what you can’t vs. various Monsters.

One of the downsides to weapon is that Sharpness may decay faster than other weapons because of the high attack speed. Be sure to keep an eye on your Sharpness Gauge and use a Whetstone when needed.

Lastly, as mentioned above, you can do both Cut and Blunt damage with this weapon so watch the damage numbers you are seeing on enemies and do the combo and attacks that deal the highest damage. This will maximize effectiveness to make sure you are getting the most bang for your buck.

Bashing the Monster with Blunt Damage (my Shield) Stuns it.