Monster Hunter World (MHW) features 14 different weapon types, with the Lance being one of them. In this Guide we’ll take a look at exactly how to use this Weapon to its fullest, as well as show you some things you may not know about it. If you’re new to the game or you are a veteran of the franchise and just need a quick refresher, this Guide is for you.

An unstoppable juggernaut, the Lance is a mighty weapon capable of going toe to claw with all but the strongest of monsters. Where other weapons would falter or dodge, the Lance blocks and retaliates. The Lance’s shield is capable of blocking all but the strongest of attacks, and from the safety of the blocking stance, it can do a variety of attacks. When not blocking, the Lance only gets stronger with the ability to charge forward and skewer the monster, hitting it repeatedly. The Lance’s basic attacks are accurate and long reaching, allowing it hit hard to hit targets with ease. Mastery of the Lance requires standing firm where other hunters would run, and striking with impunity.

will perform three thrusts in a row straight ahead of you without moving much.

is your high thrusts that do the same thing, only aiming higher, which is great for hitting the head of the monster or its tail.

can be mixed for a variety of combos. 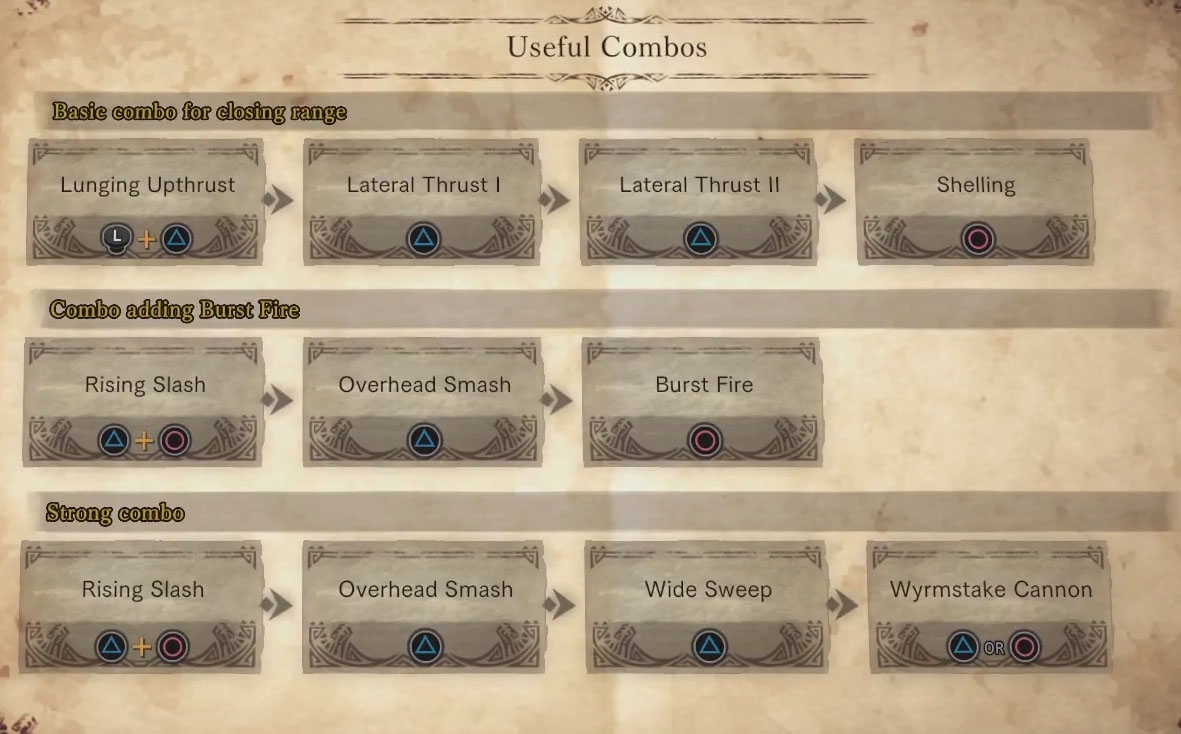 None of these are too complicated as you can see.

will cause you to Backstep out of the way of an attack, and you can perform this up to 3x in a row.

will do a Counter Thrust which will allow you to Block an incoming attack and then counter with a Charged Thrust for increased damage. You can not hold this indefinitely, but have a couple of seconds before you thrust regardless if you are attacked or not.

Counter Thrust is a great way to avoid damage while dealing damage.

if you then press

you will perform a Power Guard stance. Power Guard allows you to withstand even some of the mightiest attacks, but rapidly depletes your Stamina. You can also then Counter Attack from this stance.

will allow you to thrust from behind your Shield, allowing you to attack and Block at the same time. While pressing

while moving forward will allow you to hop forward with your Shield raised.

will allow you to do a Dash Attack where you sprint forward at a fast pace towards an enemy with your lance out, which will strike them. During the sprint, you can then either press

to slide to a halt or Forward +

to jump, which allows you to Mount monsters if you attack with

mid air. Dashing does drain your Stamina rather rapidly, so use it wisely.

A perfect example of a well timed Dash Attack.

The Lance and Gunlance have the strongest Block in the game, so players electing to go with this weapon should take advantage of that. While other players, even ones who use a Shield may Evade more than Block, with the Lance it’s the other way around. Practice Blocking and learn the capabilities of your Shield so you aren’t afraid to stand your ground.

Remember to Counter Thrust when you know a blow is coming your way, not only to protect yourself but to increase your damage. Lances (and Gunlances) are the only weapons in the game that can deal efficient damage while Blocking.

Also remember that you can use your Dash Attack to Mount monsters and take them down for easy team damage. Don’t be afraid to go for it and mix things up now and then, and get your hands dirty.

Pressing R2 + Triangle + Circle will allow you to dash. If you then press Forward + X you will jump and then Triangle to Mount.

Lastly, the Lance has excellent range and high attack power so is a solid choice for new players to Monster Hunter: World. While mastery of the weapon takes some time, becoming proficient enough to not suck doesn’t take that long. Just remember that Evading is usually paramount to Blocking when using other weapons, so don’t try to play them like you would a Lance