Monster Hunter World (MHW) features 14 different weapon types, with the Insect Glaive being one of them. In this Guide we’ll take a look at exactly how to use this Weapon to its fullest, as well as show you some things you may not know about it. If you’re new to the game or you are a veteran of the franchise and just need a quick refresher, this Guide is for you.

The Insect Glaive is a unique weapon in Monster Hunter: World, in that it allows the player to vault instantly up into the air allowing for a variety of aerial attacks as well as opportunity after opportunity to Mount the monster they are facing. Because of this Glaive Hunters will spend a good amount of time airborne, or on the back of what they are hunting, trying to hit it enough times to take it down for some easy team damage.

The other half of the Insect Glaive is the Kinsect. The Kinsect is a large insect that sits on the hunter’s arm and can be commanded to go out, hit the monster to collect extract, and then come back. These extracts provide buffs to the Hunter that afford better attack, defense, movement speed and even healing, making the Glaive Hunter even more effective in combat. 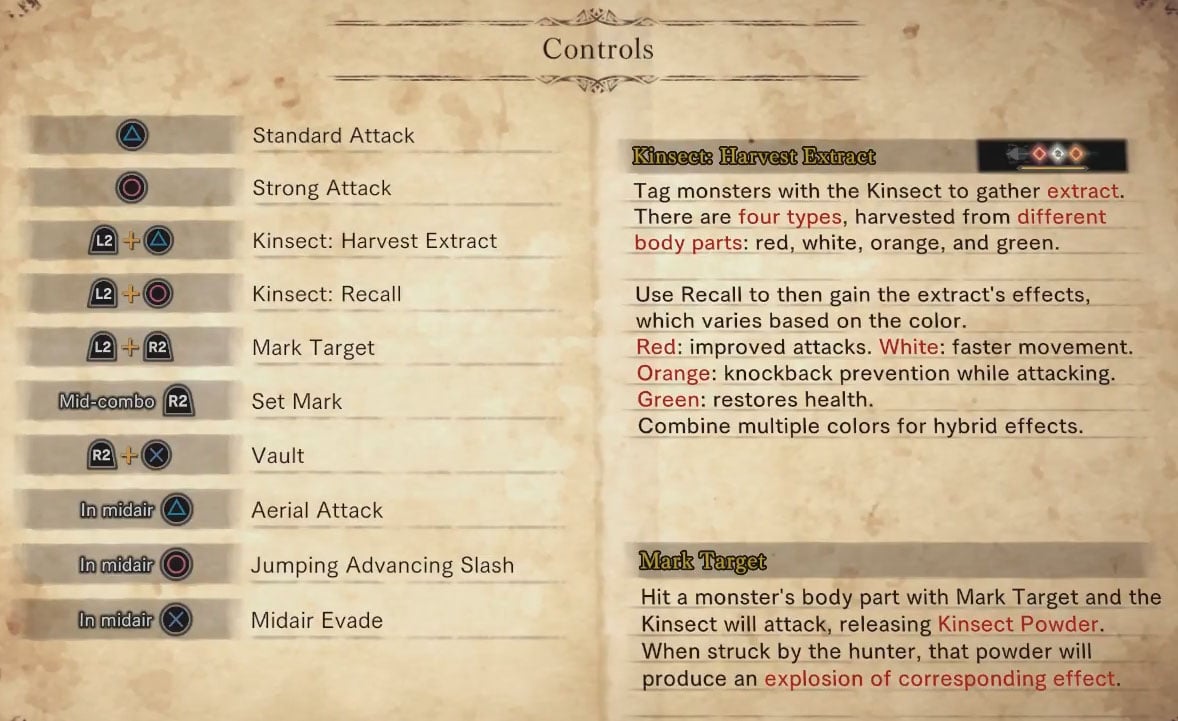 There are a lot of things to remember here and it takes time to get used to.

The Kinsect, when sent out by you, will attack the monster you are facing and will harvest extract from the location you targeted. Different parts of the monster will reward different extracts: Red, Orange, White or Green. Red is an attack buff, orange is gives you knockback prevention while attacking, white is movement speed, and green is healing. Having more than one color active at once will provide additional benefits and having all three (green isn’t a buff) will extend the duration of these buffs, as well as make them stronger.

You can see the buffs you have here as they will be lit up if you have them. In this case I have all 3 buffs.

Kinsects can be equipped independently of the Glaive, so Hunters wielding this weapon will do well to select one that benefits their playstyle. Different Kinsects have different stats, so some may be faster, some might attack harder and some might provide a better heal. They also do different types of damage such as Sever or Blunt while attacking the monster, and their Dust may apply different status effects.

Dust is released by the Kinsect after you mark a target and if struck by you will explode for extra damage of the Dust type. Different Kinsects have different Dust effects, so selecting one that best fits the monster you are facing is important.

will do an Evade. You can do any combination of these two times while in the air, but if you land a hit with the

attack then this resets and you can do an additional two attacks, and so on and so on. This makes it possible to stay airborne as long as you don’t run out of Stamina.

An example of a mid air combo.

Becoming familiar with how to produce the extract of the color you want is crucial to the Glaive’s effectiveness. Typically the monster’s head will produce Red, the body will produce Orange, the legs will produce White and the tail Green. Being able to fluidly obtain these while still fighting a monster will take practice and time, but is a must.

Glaives have what is called a Kinsect Bonus and this adds effectiveness when using a Kinsect that matches said bonus. For example if the bonus says Sever Boost, it will increase the amount of Sever damage your Kinsect does. Since Kinsects have different damage types and Dust types, selecting a Glaive that boosts your Kinsect is ideal. 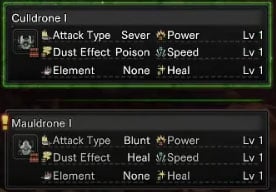 Look for a Kinsect Bonus that matches your Kinsect.

while attacking will send out the Kinsect in a fluid motion, making it easy to get the extract you need while still dealing damage. Great Glaive users will learn to attack the monster in the part they need the extract from, press

and then move or aim for the next part. Learn to rotate through the parts of the monster to maintain your extract and buffs.

Glaives have relatively low attack damage, which is made up for by the fact they can Mount monsters more easily than any other weapon, and the fact that they have a relatively high attack speed. Still if you’d rather hit harder with each attack, this might not be the weapon for you.

Lastly, Glaive users cannot Block and rely completely on Evade in order to avoid damage. Making sure that you have the movement speed buff (white) from your Kinsect will help with this tremendously, as well as practicing and learning to Evade mid air.