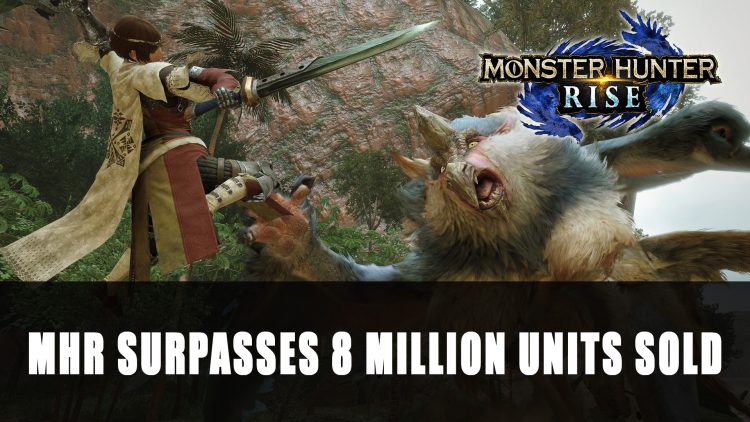 Capcom have announced Monster Hunter Rise has now sold over 8 million in shipments and digital sales.

Recently Capcom celebrated Monster Hunter Rise’s launch on PC via Steam by giving players a Free Item Pack containing some useful hunting items such as Potions, Well-done Steaks, Large Barrel Bombs and more. Also available to players were PC Guild Provisions which contains useful upgrades such as Armor Spheres as well as Kamura Tickets, as well as giving all players a Guild Cross Armor set. Also to celebrate the launch those who gift two subs on Twitch to partnering streamers will gain the Hunter’s Guild Gift Set which includes some Palamute Outfits and more.

In case you missed it Monster Hunter Rise launched this month on PC via Steam, adding 4K resolution, Ultrawide support and 60 FPS. This latest edition to the Monster Hunter franchise not only included the cute Palicos to help you in fights but introduced a new sidekick, the Palamute. Players can use them as mounts to get around the different maps, and can even fight while riding. The use of the Wire Bug, which lets you quickly leap in or pull yourself away to safety. There are also Silkbind Attacks which vary depending on your weapon choice, which adds some interesting manoeuvres making for some exciting action combat.

While we wait for the next expansion Sunbreak launching in summer 2022 for both PC and switch be sure to drop by our Monster Hunter Rise wiki for all the latest on upcoming Monsters, Locations, Armor, Weapons and more.

Monster Hunter Rise is now available on both PC and Switch.

For more news find it here in Mortal Online 2 To Perform Full Server Wipe For Final Week Of Testing and Nightingale: Everything We Know So Far (Fantasy Survival-Crafting).