Monster Hunter Rise Getting Started Guide: Top 10 Things I Wish I Knew Before I Played (PC 2022). In this Guide, I’m going to discuss the best tips and tricks that’ll go a long way to maximize your progression in Monster Hunter Rise. I’ll be talking about the top beginner-friendly weapons, dango combinations to aid in your hunts, and efficient ways to farm for zenny or the in-game currency.

Monster Hunter Rise PC Release is the highly anticipated Action RPG developed and published by Capcom. The game focuses on hunting Monsters in order to prevent them from invading your village. Monster Hunter Rise will be released on PC via Steam on January 12, 2022.

Compared to Monster Hunter World, Monster Hunter Rise is somewhat more beginner-friendly because of the new Wirebug mechanic and the Palamute buddy system. But the volume of tutorials at the start can still cause confusion in terms of the essential features new players should focus on to progress efficiently in the game. 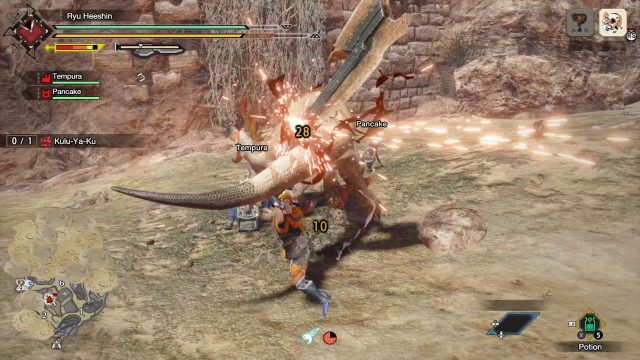 From the updated food or Dango combinations you should familiarize yourself with, to the Endemic Life that provides on-the-go buffs, it can feel overwhelming especially if you’re new to the Monster Hunter series. It is for this reason that we’ll go through the Top 10 Things I Wish I Knew Before I Played Monster Hunter Rise. Let’s start with equipping beginner-friendly Weapons.

Monster Hunter Rise has 14 weapons, which are all available to you by default. Although it’s highly encouraged to experiment with each and every one of them to determine the ones that work best for your playstyle, there are still some weapons that are simpler to wield than others. These are the Long Sword, Dual Blades, Sword & Shield, and Switch Axe. 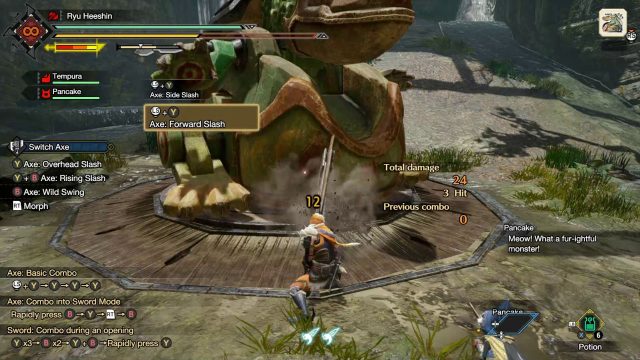 The game encourages you to not only try out multiple weapons, but to craft a bunch of other Equipment as well. As your hunts become more difficult, the current gear you have will eventually be outdated. Although, this is more applicable to high-rank Quests, which necessitate keen strategy and better Armor to survive. 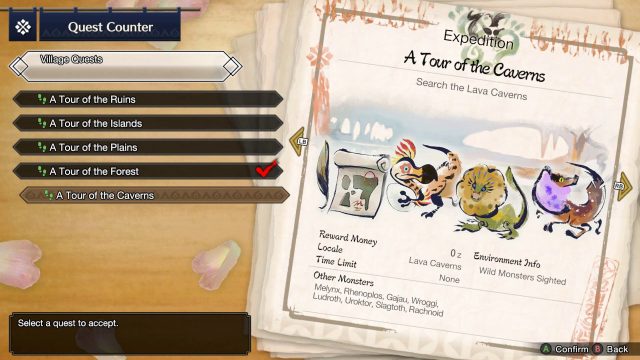 Every new map you unlock is a gateway to access newer resources. As such, you should make it a habit to hoard them since you may need these materials in the future.

It’s also important to complete 5 Optional Subquests with easy objectives such as Hunting Large Monsters or Gathering X Items. Doing so grants you Armor Spheres, which are valuable in enhancing your Armor’s defenses. In Lava Caverns when you go on lizard runs and use Throwing Kunai against them, you’re rewarded with a lot of Armor Spheres. 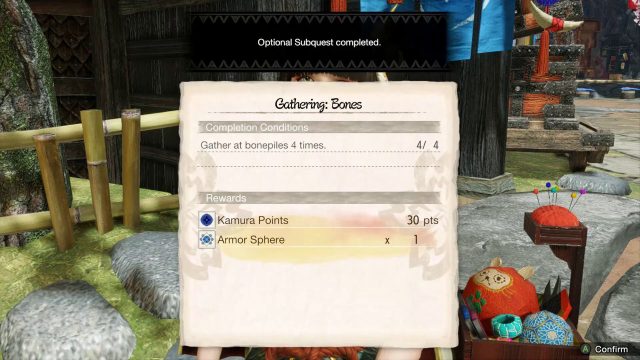 Furthermore, you can acquire rare resources when you send your Palicoes and Palamutes on multiple adventures via the Meowcenaries. But be sure to train them accordingly with the help of the Buddy Dojo and a Lagniapple to gain better rewards.

How to Farm for Zenny

Zenny is a valued currency in Monster Hunter Rise because you need this to craft high-quality gear. Be sure to keep an eye out for Optional Subquests again together with Expedition Tours. For example, you can select tours that have an upsurge in mining outcrops. This lets you mine ore and crystals, which sell for a decent amount of zenny. If you have the overall Geologist Skill Level 3 from an armor set such as the Leather S, you’ll be able to increase your mining output further. 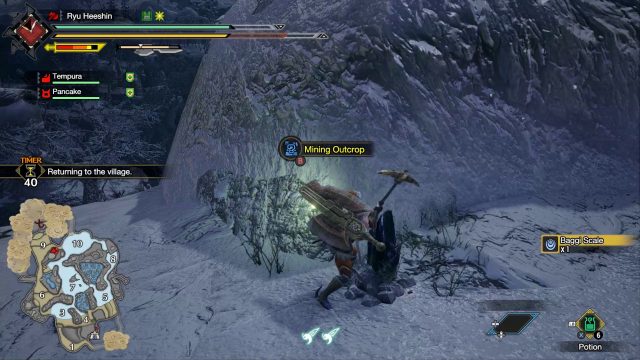 You can also purchase rare finds from the Argosy using Kamura Points and then sell them to merchants. Additionally, in the same Buddy Plaza area, remember to visit the Cohoot’s Nest after completing 1-3 quests to check whether or not they’ve left behind Steel and Silver Eggs, which sell for thousands of zenny.

Last but not the least, if you’re doing simple quests, substitute one of your Dangos for the Wealthy Man to raise the amount of zenny you receive after finishing that same quest.

Dangos and the Best Combinations to Eat Before a Hunt

Monster Hunter Rise introduces a Japanese dessert known as Dango as a food mechanic rather than following the footsteps of Monster Hunter World where you had to eat full meals. Before the beginning of every hunt, you’ll have to prioritize eating different combinations of Dango to receive buffs and to increase your HP and Stamina.

However, the Dango’s bonuses won’t always be triggered as indicated by their Activation Chances. To ensure that you maximize these buffs especially in challenging hunts, you need Dango Tickets. 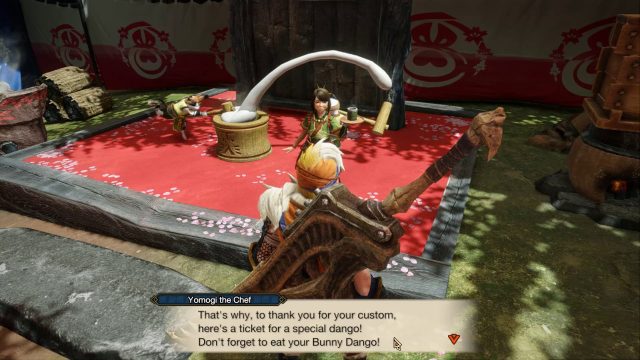 Dango Tickets are acquired by first roasting food when you select Motley Mix in the Tea Shop or Canteen. Next, you have to approach Yomogi the Chef to collect the tickets. To farm for these, it’s best to acquire Raw Meat from the Argosy and then cook them via the Motley Mix. For instance, the Balancing Dango’s Activation Chance increases from 55% to 95%, which is huge, when a Dango Ticket is applied! 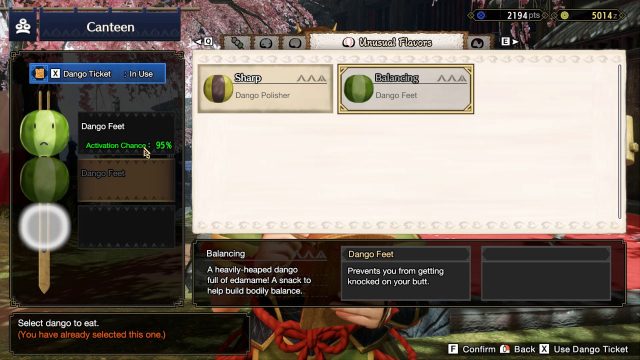 The best Dango combinations to improve your defenses are Bestnut or Super Bestnut to reduce the damage you take, Medicinal to heal you efficiently, and Balancing to avoid getting knocked down. You can also opt to substitute Balancing with an elemental type of Dango such as the Piping-hot Egg and Spicetingle to gain Fire and Thunder resistance, respectively. You’ll be able to unlock more of these the higher your Hunter Rank (HR) goes up.

To enhance your offense, you ought to consider taking the Spud-luck to reduce the effectiveness of large monsters, therefore making them easier to beat, Mint-iature to boost your attack and defenses, and Peach Skill to retain the sharpness of your weapon.

In addition to Dango, you have to prepare essential items that restore your HP and Stamina, as well as improve defenses to survive longer in Combat. Relying on storage boxes won’t be enough so here are the narrowed-down items you should save for your hunts. 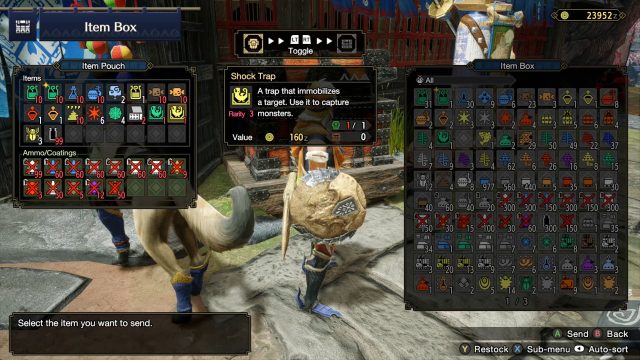 Note that you’ll eventually unlock the mega versions of these potions as your HR goes up. Now if a monster inflicts poison, you also have to stock up on Antidotes and Herbal Medicine.

Stamina is a precious resource because it lets you perform a variety of activities such as using Wirebugs and dodging enemy attacks. As such, you’ll notice that your max Stamina often decreases. If you end up completely depleting this resource, you’ll need a couple of seconds to recover your bearings. 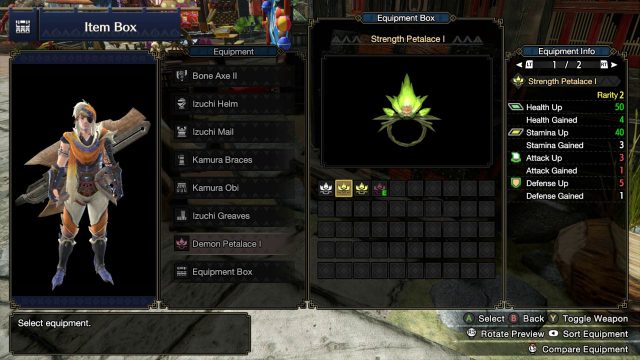 Thankfully, there are a couple of effective ways to restore your Stamina. First, make sure to equip a Petalace to permanently boost it like the Strength or Fortitude Petalace. The higher your rank is, the better the Stamina boost will be. Second, stock up on Well-done Steak to fully replenish Stamina. This is done when you cook the Raw Meat we spoke of in the Dango combination section of this guide. Third, eat the Pinea-full Dango to reduce stamina cost.

As you’re exploring, you’ll encounter Endemic Life in the form of Yellow Spiribirds. This is a free buff that enhances max Stamina even more so be sure to search for them. With the Chirp Chirp Dango, these Spiribirds will have a higher chance of approaching you.

Identifying and learning monster patterns are essential Skills you have to master to survive in Monster Hunter Rise. The ones you’ll encounter feature unique moves, elemental damage and resistances, and vulnerabilities. This is why you need to, first and foremost, pay attention to their movement. Noticing when a Lagombi is rearing up for a charge attack is essential to be able to decide which direction to dodge towards. 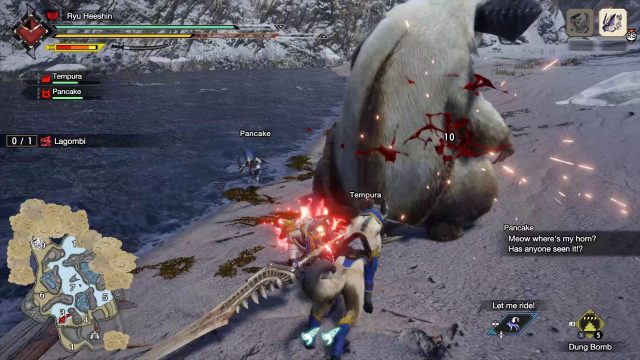 In terms of vulnerabilities, however, armored monsters like the Barroth don’t have apparent weaknesses compared to their non-armored counterpart such as the Royal Ludroth, which is susceptible to taking high damage when you attack its head. Because of this, you have to experiment with hitting the Barroth’s more exposed parts like their torso and limbs, rather than their head that they use as a weapon. You also have to avoid the globules of mud that they hurl at you because it greatly slows down your movement. 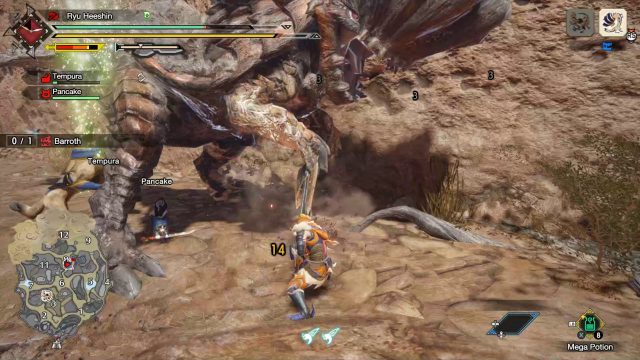 These are just some examples of what you can expect when facing off larger monsters. As your rank increases, the ones you come across become more formidable so much so that you have to utilize the things you have such as the Wirebug, which I’ll discuss next. Remember if you really need help, you can check out the Monster Hunter Rise Wiki for all the information about their weaknesses and resistances.

The Wirebug is one of the most useful additions in the game, and because of it players are able to execute more tricks by exploring the map’s verticality. Pulling yourself towards your target is the most basic move, enabling you to immediately get back into the fray. Additionally, you can utilize it to quickly recover after being knocked down by an enemy’s massive attack. Instead of floundering around on the ground, you can expend a Wirebug charge to get to safety in order to heal up. 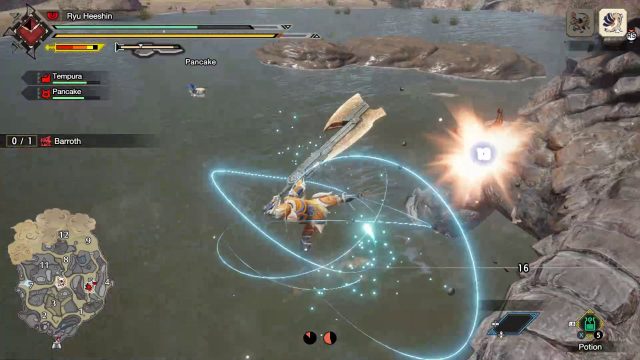 Wirebugs contribute significantly to the attacks you perform. For instance, you can activate the Switch Axe’s Invincible Gambit Skill to inflict massive damage at the cost of a Wirebug Charge. Furthermore, you’re able to mount a large monster to gain control over them. Doing so makes them frantic and greatly damages them when pitted against other monsters. 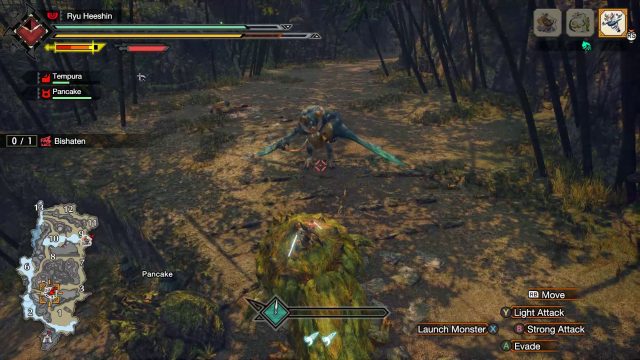 The Wirebug is also essential for exploration. In addition to moving around quickly, you can use this feature to launch yourself upwards on cliffs, which you would not normally be able to climb, and traversing the open world becomes more interesting as a result. 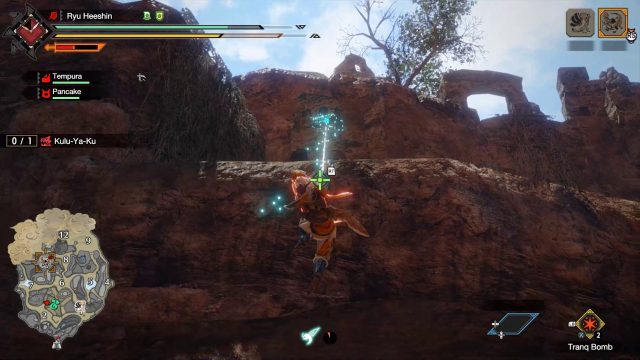 Lastly, be sure to keep an eye out as well for wild Wirebugs out in the wilderness because these Endemic Life forms grant you a temporary third Wirebug charge, which can be crucial in difficult monster encounters.

The Palamute is definitely your new best friend. In contrast to the familiar Palico, the Palamute is a new buddy that is more offense-oriented in battle due to their aggressive nature as compared to their feline friends. You can even use them as a springboard to leap into combat, giving you the opportunity to deal great damage with an initial attack. 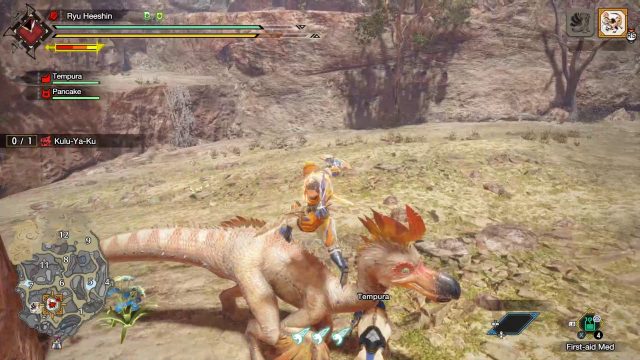 Palamutes also function as mounts, making navigation much quicker. Dashing around the map makes hunting and pursuing monsters much easier than previous Monster Hunter games. One good feature about this is that you do not need to dismount to be able to gather resources, activate Endemic Life, or carve monster carcasses. It’s also possible to sharpen weapons and use certain items while mounted, making you less vulnerable and saving time since you’re not rooted in place. 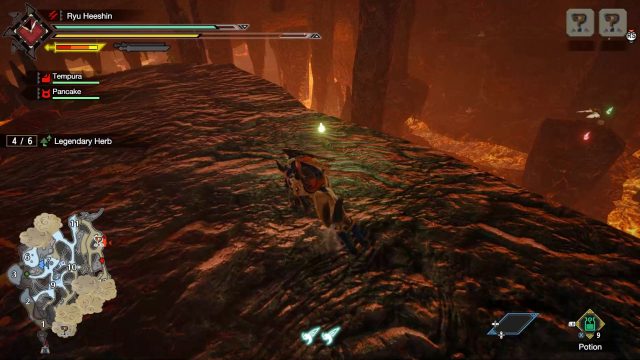 Identify When to Kill or Capture Monsters

Killing and capturing monsters yield two different results. Killing a monster allows you to retrieve its specific parts. For instance, if you need the Barroth’s tail to craft the Barroth Helm, then it’s better to cut it off and then carve it from their body due to the relatively higher drop rate. This is often the case for difficult monsters like Elder Dragons and Apex Monsters, both of which can’t be captured. 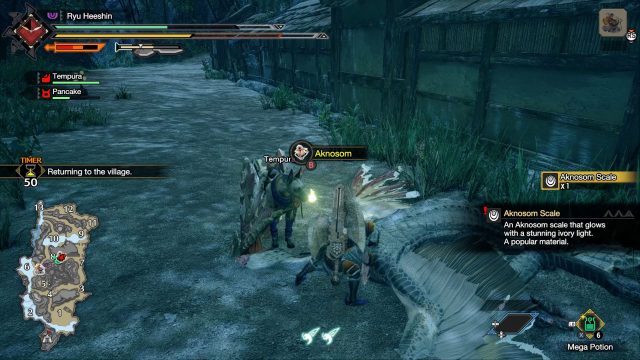 For the others though, you have the option to capture them. To capture a monster, you’ll have to weaken them first as indicated by a blue icon underneath their portrait. You can then set a Shock Trap or Pitfall Trap under them and then activate Tranq Bombs immediately thereafter. Unless you’re facing higher-tiered enemies or you’re aiming to obtain a monster’s specific body part, it’s better to capture them instead. This will not only make your hunts more efficient since it’ll end sooner but you’ll also receive more rare rewards in the process. 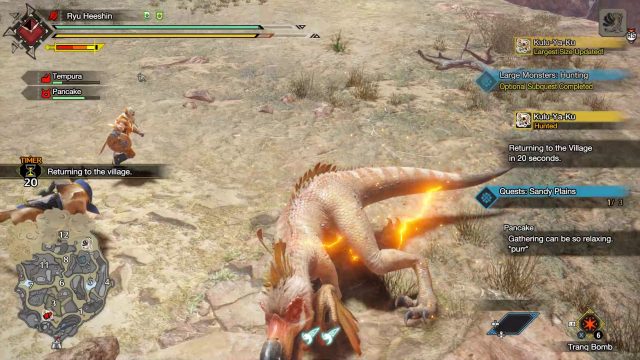