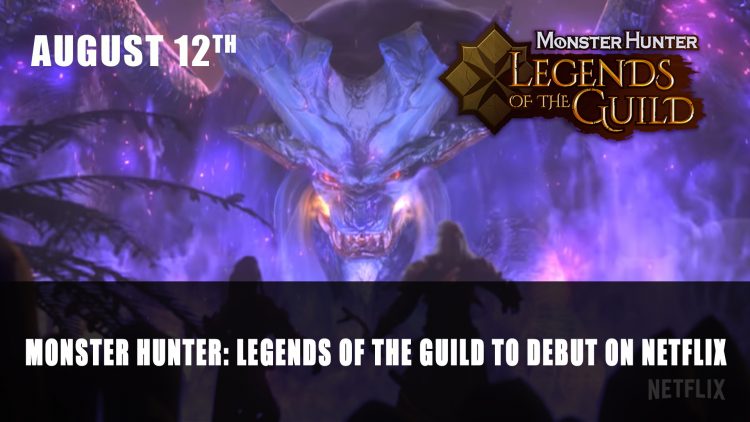 Netflix and Capcom have announced the animated film Monster Hunter: Legends of the Guild will be debuting on the platform on August 12th.

Monster Hunter: Legends of the Guild Debuts on Netflix on August 12th

Monster Hunter: Legends of the Guild has finally received an official trailer and release date for the Netflix original, landing on the platform on August 12th. The film has been a long time in the making, first being announced back in 2018, which was set to release in 2019.

The film is being animated under Pure Imagination Studios, who has worked number Lego animation projects including Lego Batman and more.

You can check out the official overview of the film via Netflix below:

The Monster Hunter series has gained explosive popularity around the globe since the release of the PlayStation 2 game Monster Hunter by Capcom in 2004. These hunting action games have sold a total of 72 million copies across the entire series (as of March 31, 2021), and took the world by storm by developing cooperative gameplay between players through hunting monsters in beautiful natural locales. The newest entries in the series are Monster Hunter Rise, a game released for Nintendo Switch on March 26, 2021, and the role-playing game Monster Hunter Stories 2: Wings of Ruin, which released on July 9th for Nintendo Switch and PC. And now, this global hit game series will be reborn as a Netflix Anime Film.

The story follows a young man called Aiden who calls himself a hunter, and protects the village. One day the village is threatened by an Elder Dragon, a mysterious monster. In order to save his village, Aiden leaves home on a quest alongside Julius a first-rate hunter and member of the Hunter’s Guild and companions to find a way to stop the danger.

You can check out the Monster Hunter: Legends of the Guild trailer below:

This isn’t the first animated title for Netflix to venture into, as there has been Dragon’s Dogma, Castlevania, DOTA to name a few.

The most recent Monster Hunter titles in the way of games to release are the limited-time Switch exclusive Monster Hunter Rise which will release on PC next year, and the turn-based RPG Monster Hunter Stories 2 which enables monster hunting and Monstie hatching fun.

Monster Hunter: Legends of the Guild premieres August 12, only on Netflix.

For more news find it here in