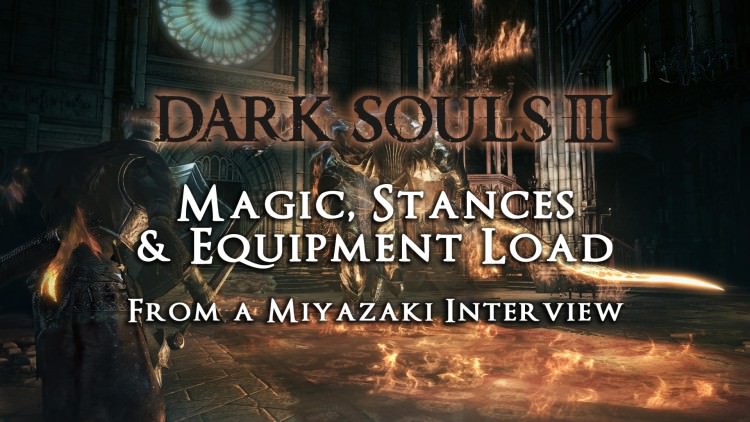 During our Gamescom trip, we had the good fortune of meeting Katharina Reuss from Computec. She has kindly shared with us some interesting Dark Souls 3 reveals they obtained during their interview with Hidetaka Miyazaki

Below are some very interesting reveals and confirmations that fans will very much enjoy!

There will approximately as many weapons in DS3 as in DS2

Yes!!! This was a big worry for many, given the unpopular lack of variety in Bloodborne. We were all hoping that this would be the case, but having confirmation from Miyazaki himself is indeed wonderful to know. Now, if the previous leak is to be believed, there will be “100 New Weapons and 40 New Armor Sets”. They will all be added here when we know them

This confirms the rumored “Sacrifice” mechanic, or at least confirms that there is indeed a mechanic around this action.

The characters in the demo are heavy builds and will be slower in the final game. The made them faster for the demo.

Many were surprised at the agility and lack of equipment load, but some cautioned it is not uncommon for demos to exclude equipment load. With this comment, Miyazaki confirms that heavy builds are indeed a thing, and that equipment load returns, again distancing itself from Bloodborne.

There will be magic and the spells will also have alternative “stances” on L2.

We had seen no magic during this demo or the E3 presentation, but we now have confirmation not only on the existence of magic in the game, but on the fact that there will be stances or weapon arts for magic spells as well. This may explain that mysterious Mana Bar we saw during the demonstration. Will they be called “Magic Arts”? We’ll find out soon because…

There will be magic in the next demo.

This will likely be at Tokyo Game Show, which we are attending on September 17th. Pencil it in and have your devices charged, as there will also be “proper” (not off-screen) gameplay footage!

Full Interview Translated below, make sure to visit PCGames.de for a great picture of Miyazaki!:

PCG: In recent years the popularity of Souls series has increased enormously and is now both a driving force by From Software and Namco Bandai. How do you ensure that each new game also developed further and not merely iconic moments from past titles – such as the fight with Ornstein and Smough – simply repeated?

Hidetaka Miyazaki: You’re right, in this regard, we must take good care that we do not start to repeat ourselves over time. Over the years, the players have become accustomed to the basic mechanics of Dark Souls and now know very well how to deal with problems. However, I am very confident in Dark Souls 3. The new fighting styles and the more agile Boss opponents we will bring a lot of variation to the game, which was not seen in the series.

Miyazaki: Anyone who has played the second part, the enormous increase in the number will have noticed on weapons and equipment. For Dark Souls 3 we intend a similar amount to pack into the game. From a compact set as in bloodborne we want to remove this time to allow more different character builds.

PCG: In the latest trailer we saw the character used a red-hot metal rod to to impale a downed body. What does it mean?

Miyazaki: Unfortunately, I can not make this any more precise information, but I can promise that this is a new gameplay element that we will explain in more detail later.

PCG: You recently mentioned that Dark Souls will 3 not be the last title of the series and instead probably could represent something of a turning point. Have you ideas in which direction Dark Souls will develop? Perhaps a science fiction or ninja setting as in Armored Core or Otogi?

Miyazaki: A new project is at an early concept phase. Until Dark Souls is released 3,we can’t say much more on that. Both ideas sound very good, but a combination of the two series, for example, is not something we are considering. At FromSoftware, we think about ideas for a long time and only act on them when we are satisfied with the proposition.

PCG: The multiplayer modes have changed repeatedly in the Souls series and changed the basic principle with the mixture of the summon and attacked by other players, however, remained the same. Are planned for Dark Souls 3 any changes?

Miyazaki: The system should be run easier and less complicated. In the previous parts it was difficult especially for co-op players to see each other. Here we want to provide more assistance. We have taken note of the fact that many PvP players very quickly collect at certain points of the game for PvP purposes. I can not share exact details at this time, however. I’m sorry. * Laughs *

PCG: With regard to the issues youPVP: How do you act the difficult balance between PvE and PvP?

Miyazaki: First of all, I should tell you here that I like the PvP aspect in Dark Souls very much. It often feels like there can’t be tinkered with it much. It is indeed extremely difficult to find an appropriate balance here, because despite the many similarities both types of fighting are fundamentally different. We set two internal teams very early in order to come here to a common denominator-balance. The feedback of the players is taken into account after the release of the game.

PCG: In terms of speed Dark Souls 3 seems to be more like Bloodborne. How do you make sure that tank builds will still be a viable choice when enemies are that fast?

Miyazaki: We made both of the characters in the demo more agile despite them carrying heavy weapons and armor. We wanted to show the players how we intend Dark Souls 3 to feel. In the finished game these characters will definitely be slower. But we do make sure that even heavier builds are fast enough and won’t have a disadvantage in the game..

PCG: What about magic? There wasn’t any in the demo..

Miyazaki: Dark Souls is known for its intense melee fights, that’s why we decided to only put melee weapons in the first demo. But there will be magic in Dark Souls 3. Like with the melee weapons, you will be able to trigger a special move/function for every spell by pressing L2. In the next demo, there will be magic. More information about that will come later this year.

Special thanks to Katharina Reuss from Computec