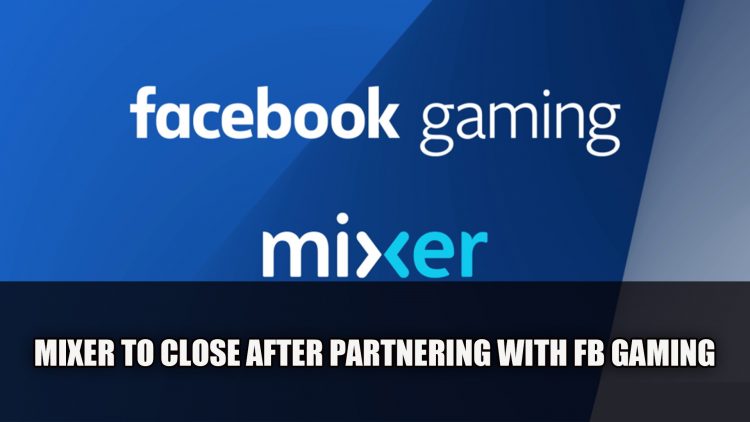 Microsoft has announced they are closing Mixer and partnering up with Facebook Gaming, meaning the end of Mixer as we know it.

Microsoft has released a statement sharing that they were “pretty far behind” in terms of the goal they wanted to achieve with the streaming platform. The Mixer platform will be closing on July 22nd 2020, meaning those who currently stream on the platform can migrate to Facebook Gaming or even to other platforms.

According to a blog post by Microsoft they expressed that the Mixer service will be shutting down due to it’s lack of “ability to scale the platform [Partners and streamers] as quickly and broadly as possible.” This isn’t the only collaboration in the works as there is an existing collaboration between the Xbox brand and Facebook who are also partnering for Project xCloud, which will integrate with Facebook Gaming. In an interview with The Verge, Phil Spencer, the head of Xbox shared this choice was to grow the streaming platform and benefit from Facebook’s vast audience:

We started pretty far behind, in terms of where Mixer’s monthly active viewers were compared to some of the big players out there. I think the Mixer community is really going to benefit from the broad audience that Facebook has through their properties, and the abilities to reach gamers in a very seamless way through the social platform Facebook has.

Quite notably Mixer picked up a number of large streamers including the Fortnite famous Ninja who made quite the lucrative jump to the platform, back in August last year. But this also means they are free to return to their previous streaming platform Twitch if Facebook Gaming doesn’t fit their community. But it looks like the news hasn’t been well received, some sharing the disappointment in the move.

I love my community and what we built together on Mixer. I have some decisions to make and will be thinking about you all as I make them.

Mixer has quite the niche market, catering to those who left platforms such as Twitch. Now moving to such a broad viewership may help in terms of growth for streamers out there, but it also adds quite a wide range which may or may not fit everyone. As Facebook requires you to create an account usually under a real name, it will be a wonder if the same kind of viewers will exist on Facebook, rather under the anonymity of a username. Of course fake names exist, or even private ones.

Giants such as Youtube also tried their hand in the past in Youtube Gaming at one point, making a separate platform catered to livestreaming gaming and gaming content, however the app was then shutdown. Youtube decided it was better to concentrate on gaming on the Youtube app as a whole rather than a separate entity. Integrating into a market that already has viewership could bode well for Mixer, but only time will tell.

With Microsoft’s current relationship with Facebook it wouldn’t be too surprising to see more Xbox Series X integrations in future and further collaborations in the gaming sphere. What do you think of this news? Let us know in the comments below.

For more news be sure to read next Elder Scrolls Online Free Pet When You Opt In To Email and The Witcher 3 Is Free On PC If You Have It On Console.