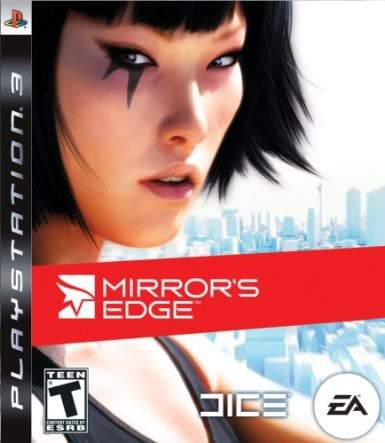 Mirror’s Edge was created and published by Electronic Arts and released in late 2008. This review is therefore somewhat late to the release party, but relevant to gamer’s looking to catch up before the sequel hits stores sometime next year. The game takes place in a dystopian police-state that is carefully monitored and controlled. The protagonist that you play is a “Runner”, a courier that carries secret messages and packages while evading the surveillance set up by the government. 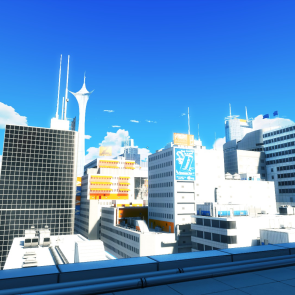 Early on you attract the attention of the police and thus spend much of the game avoiding them. The game focuses on fleeing rather than fighting, as your chances of winning any fight against more than one person than are not good. While you can disarm people and steal their weapons, stopping to fight is generally a bad idea. Carrying a gun also slows you down depending on the size of the gun and reduces the abilities you can use, making the gun far less useful (frequently I’ll throw a gun away as soon as I get it because it’s just not worth holding on to). In most cases your best choice is to run away or around any enemies and just keep running as very few people are willing to jump off a building to chase you. This requires the player to make quick assessments of the level and enemy layouts, and even quicker reactions for fast movement along the paths to freedom. It is somewhat exhilarating and it can be very engaging. 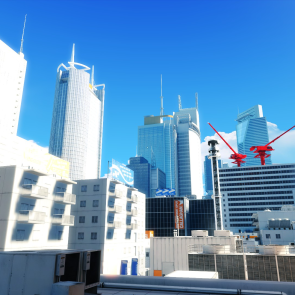 Played in first person and heavily influenced by parkour, the player focuses on finding paths through urban environments to get to his/her objective. This includes jumping off walls for momentum, leaping from building to building, running on and climbing pipes, zip lines, and anything else you can find to get you where you’re going whilst staying undetected and on time. On easy and normal difficulties some objects are highlighted in red which the game calls “Runner’s Vision”. These are highlighted to draw your attention for special moves or to make the path more obvious. You can usually take your time planning a route, exploring, or hunting collectibles, but at other times you have to move fast and not stop. When you do moves in a quick chain you enter the Runners Flow state, moving faster and jumping farther and more fluidly. There is also a form of bullet-time to give you a few extra seconds when you need them. 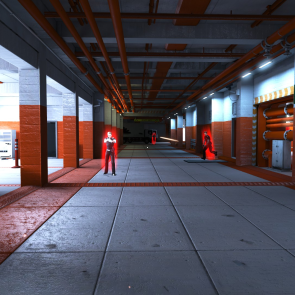 Mirror’s Edge has a somewhat unique art styling, in which surfaces are not highly detailed but are generally a bright solid and colorful. The cut-scenes are animated instead of digitally rendered or live action. This bright and colorful world masks the darker side of the police state that the game takes place in, and adds a stark contrast to the tone of the narrative and the simple beauty of the vistas. The games music is wonderful; composed of slower, soothing tracks to accompany you while exploring, and faster, up-tempo ones for combat situations. Most noticeably the theme song Still Alive (nothing to do with the Portal song, also called Still Alive,) is one of the best pieces of video game music I’ve heard.

Five years after release, the game still feels and plays very nicely, however it is also a little short.  The gameplay is roughly ten hours long for the story mode. For replayability there is a speedrun mode, for beating your time in story chapters, and a time trial mode with some new maps to play and medals to achieve beating set timers. These help extend the life of the game, but it still comes up a little short. There isn’t a good incentive for mastering the time challenges. Overall the game is great but short, and left me looking forward to a sequel.