Midnight Suns Wolverine Build Guide: How to use Wolverine – In this Marvel’s Midnight Suns Wolverine Build Guide you will learn how to use Wolverine in combat effectively, as well as which Ability Cards you should use in order to get the most out of this hero. We’ll also explore how to make the most out of your group by choosing which characters complement him the best, thus making your party adamantium-solid!

In a good Midnight Suns Wolverine Build he will be played as a tank character, a bit different than both Captain Marvel or Captain America. Those two characters generate a lot of Block with their abilities and then absorb hits into it, preventing them from taking damage. Wolverine on the other hand, doesn’t have a way to generate Block, so he is mostly focused on absorbing the hits to his health pool and then replenishing it afterwards.

This puts him in a bit of a precarious situation, because if he takes too much damage, you might get injured or KO’d before his turn comes around. This is less likely for Captain Marvel or Captain America given enemies must go all the way through their block, and only then will they go through their health pool. 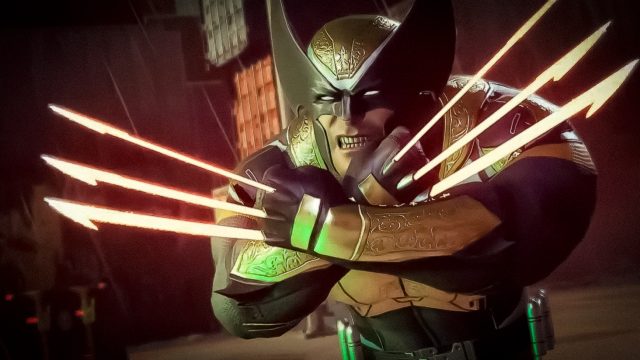 On top of that, Wolverine doesn’t have some crazy high health pool, so he needs to be more careful. Nor does he have any abilities that reward him for being at full health or for taking damage – like Ghost Rider and Hulk do. So there’s no real incentive for him to take damage, other than he can replenish it more easily than some other characters.

Thankfully, he has a passive ability called Healing Factor that will ease this situation by helping him heal. Healing Factor basically makes Wolverine gain health whenever you redraw one of his cards, and this is especially useful when you don’t need or have no use for one of his cards. This is going to help him gain health without having to waste a card play, which I’m personally a big fan of. 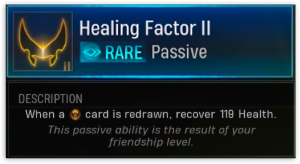 What Cards to use with Wolverine in Midnight Suns? 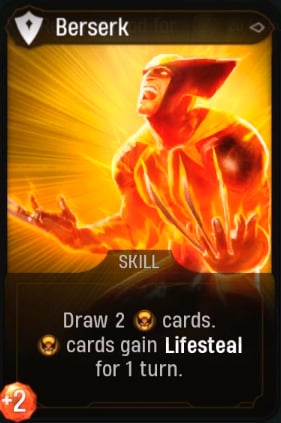 Berserk is Wolverine’s way of drawing his own cards. He can draw 3 Wolverine cards when upgraded, and gives his cards Lifesteal until the end of this turn – as well as generating Heroism.

Note that Lifesteal is different than Blood Magic. Blood Magic makes it so that you only gain health when you deal damage with Attack cards. Lifesteal, however, applies to all damage that you deal. Meaning even if you threw a heroic card or if you had Lifesteal into the next turn and you did counterattacks, that would heal you. The Lifesteal gained through Berserk however, only lasts until the end of your turn so you won’t gain it on counterattacks if you only use this card.

This obviously makes it a lot better than Blood Magic given there are a lot more ways you can generate damage than just attack cards, and since Wolverine is a tank that’s going to be taking damage, this is the main way we’re going to keep him healed up. You want to be able to use your attack cards and heal at the same time instead of having to use cards to heal and waste card plays. 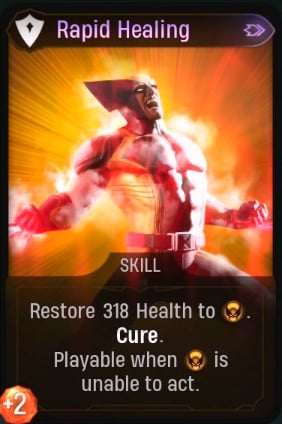 Despite the fact you should always heal via Lifesteal and from Healing Factor 90% of the time, I do have Rapid Healing in this Midnight Suns Wolverine Build. This is a card primarily used to heal, as it restores a ton of health for Wolverine and also Cures him, meaning it removes any negative status effects he has. But the best thing about this card is that you can play it when Wolverine is unable to act, so if he’s Stunned, Dazed or under some other effect induced by enemies during their turn, you’ll be able to play it and remove those status effects.

In my opinion, this is the single most powerful effect that Wolverine has over Captain Marvel and Captain America. If these characters get Dazed or Stunned, they’re Dazed and Stunned. There’s nothing they can do about it unless somebody else Cures them. But Wolverine can use this card in order to Cure himself AND also heal at the same time. You can even modify this card later to get it for free, so that it doesn’t even cost a card play.

Think of a scenario where you’re in a difficult, challenging fight, and you have rapid healing in your hand. Rapid Healing is going to allow you to cure even if he cannot function. This is, effectively, Wolverine’s insurance policy in case anything really bad happens to him. 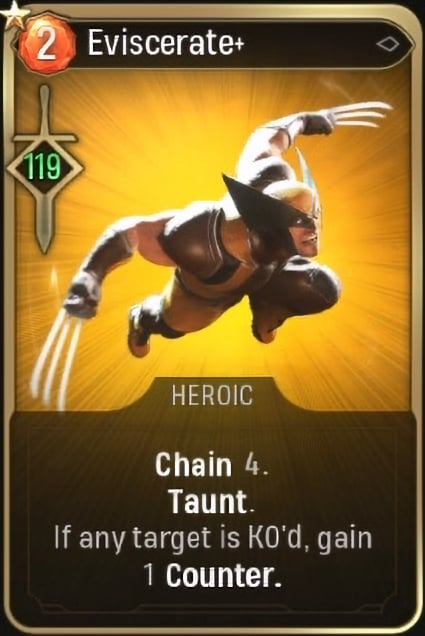 Eviscerate is a heroic ability that costs 2 Heroism. It’s a chain format ability, meaning you can hit a combination of either four targets, or two targets twice each, or one target twice and then other two, etc. It taunts every enemy hit, so they’re going to attack him next round, and if you KO one of those enemies, you’re going to gain one Counter. That is, you will counter attack any hits you take during the enemy’s turn – as long as you aren’t Dazed or Stunned.

So this is a really, really good card, not only for dealing damage but also for taunting enemies and then dealing damage when they come for you during their turn.

Despite having decent DPS, this Midnight Suns Wolverine Build isn’t the most DPS-heavy character in the game. He really gets added bonus to his DPS through counter attacks, so you always want to make sure you trigger that whenever its possible by getting a KO.

On top of that, you can later modify Eviscerate to twice as much damage, which is fantastic. This makes it twice as effective, and increases his over damage output considerably! 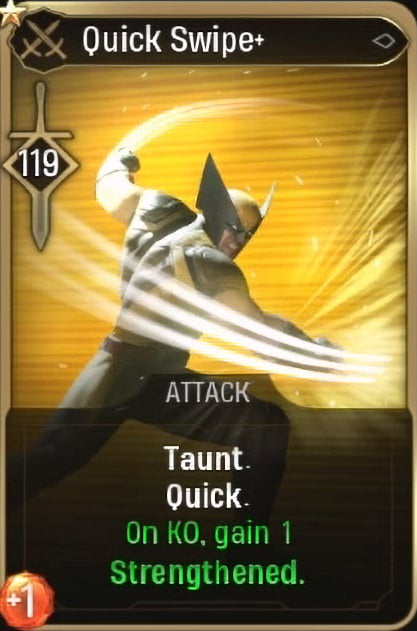 Quick Swipe is a great way to use a Quick attack to finish off an enemy, or even to kill the weak in order to gain Heroism from it as well as gaining some cards or maybe an effect like Strengthen that will further boost Wolverine’s Eviscerate damage.

The idea here is to try and draw cards until you’re drawn an Eviscerate card, and maybe a Quick Swipe. Maybe finish enemies off using Quick Swipe and get Strengthened, then use Eviscerate, and then if enemies hit you on the next turn you can heal up with Rapid Healing or you can discard a couple of Wolverine cards to heal up. You just keep on attacking and don’t use any card plays to heal. 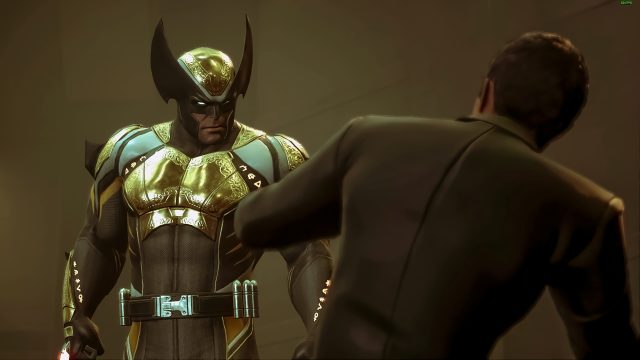 Which Heroes to Use with Wolverine in Midnight Suns?

When it comes to characters that work very well with this Midnight Suns Wolverine Build, Doctor Strange is probably the best one. This is because he has two cards that once upgraded can boost the of all four of these attacks, which is phenomenal. And also, given you only have 2 attacks slotted here, he can pull back some of them, thus allowing you to use  Quick Swipe– again. And because the damage just keeps going up as you buff them with Doctor Strange, these Quick Swipes can get up to really, really high damage.

Nico is also a fantastic choice for this Midnight Suns Wolverine Build because she can buff Wolverine with Blood Magic, even though it’s not as good as Lifesteal. With this, she can buff him with Strengthed, make him draw one of his cards, give him Block if modified and she can use Witchfire, which hits a lot of enemies on screen – and since Wolverine hits a lot of enemies on screen as well, he can soften them up and then have Nico finish them off with it. Even more than that, her Double Up ability is really good, enabling you to draw double copies of Eviscerate or a couple more copies of Quick Swipe, which is fantastic as well. 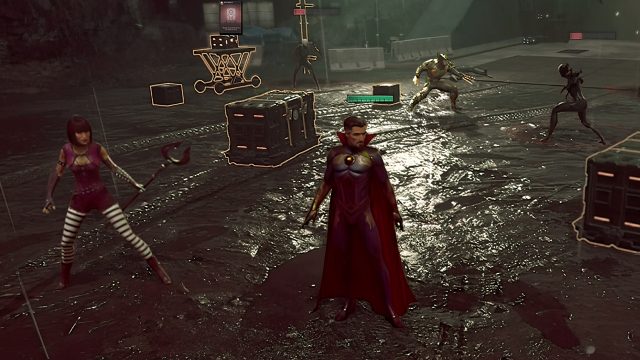 Blade is also a good character to take along with Wolverine because they can double up on spreading damage around. You can also modify to add Bleeding to it, which can help Blade with his attacks as well, so there is some synergy there.

Iron Man and Captain America are also not bad choices. Captain America has Tactician which not only allows them to draw cards which might be Wolverines cards, but he can also give Wolverine Block, something he really needs. And Iron Man can give him Block as well with Heads Up and since Iron Man is primarily a DPS character and Wolverine’s a tank, Wolverine can efficiently tank while Iron Man does his thing on the DPS side of things.

All in all, this Midnight Suns Wolverine Build plays a bit like Hulk, is a tank character that’s mostly focused on absorbing the enemy hits directly to his health, but replenishes it afterwards by using Healing Factor as well as cards like Berserk or Rapid Healing. Doctor Strange is a particularly good companion as he’s great in boosting all of the attacks suggested in this build, as well as redrawing his cards. Wolverine also excels in taunting enemies, which allows him to gain lots of Strengthened and Counters. Nico can also supply the latter, whereas Captain America and Captain Marvel will do a solid job in also getting him Block.