Spider-Man is a DD (damage dealer) that’s very good in spreading damage around. You acquire him pretty early in the game, though not right from the start. Spider-Man’s style of combat leans heavily on environmental attacks, a lot more than any other hero in the game – with perhaps Magik coming in second.

The strategy described in this guide relies on two parts, the first one involves dealing damage to soften up your enemies by using your surroundings, and the second stage consists in finishing them off with the ability cards we describe further in this Guide. 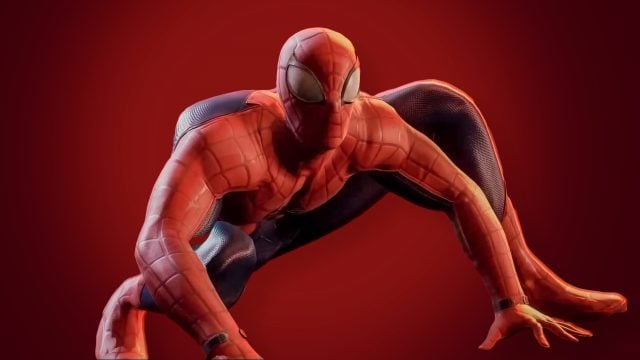 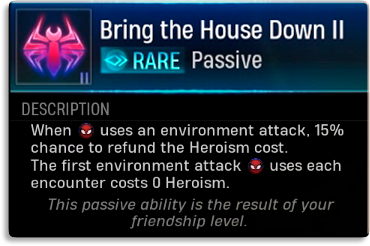 What Cards to use with Spider-Man in Midnight Suns? 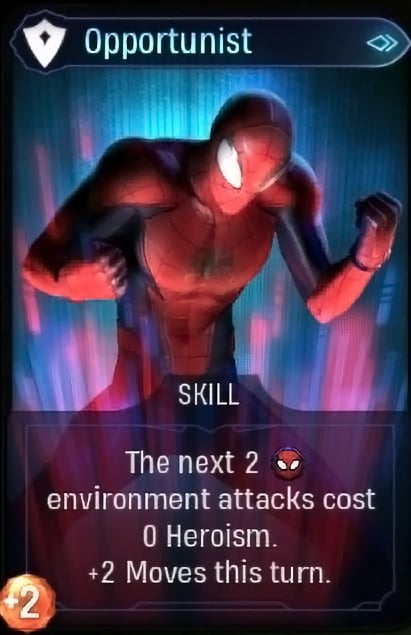 His focus on environmental attacks only becomes more evident when you take a look at his Opportunist card, which gives you Heroism while making the next two attacks performed by Sìder-Man cost 0 Heroism – plus, it gives you two additional moves allowing you to move around and position yourself perfectly for some environmental attacks.

When you upgrade Opportunist you add damage to these attacks, making them more deadly, and use modifiers gaining various other effects. For example, mine gives me a Spider-Man card that then allows for further plays after the environmental attacks are used.

Playing Opportunist should really be the first thing you play at the beginning of every mission with Spider-Man. Between this and the Bring the House Down passive, you’re going to get 3 free attacks with environmental attacks that won’t cost you any Heroism. Also, do note that the most enemies on screen are usually at the beginning of the mission, so think of this as an excellent opportunity to hit as many enemies as possible with environmental attacks.

And given that this card generates Heroism -and you’re not going to consume any with these attacks-, it frees your teammates to use some of it or engage in card plays. You only use one card play for Opportunist, so the other two card plays can be used by your other teammates. 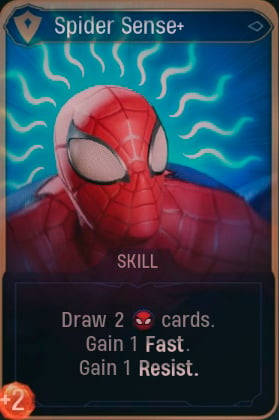 Spider Sense is the card to play in the case you don’t have Opportunist. What this card does is it draws you two Spider-Man cards, gives you Fast and Resist, as well as giving you Heroism. Meaning Spider Sense will not only give you a chance to draw Opportunist, but many other benefits as well.

Again, you really want to get that Opportunist card in your hand at the beginning, and if you don’t have it but can use this card, this is the card to play. 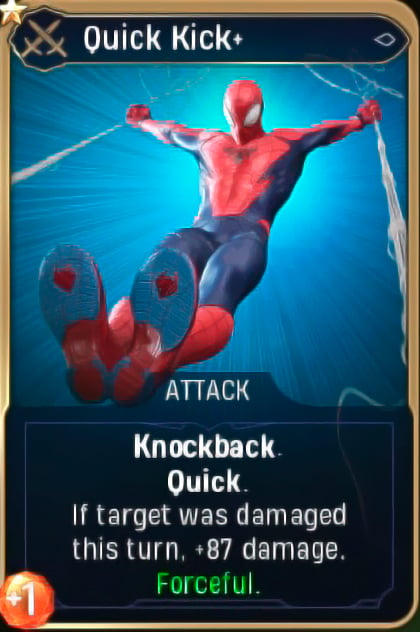 Quick Kick is a Quick attack that doesn’t really deal any damage natively, but generates 1 Heroism and has Knockback. Once you’ve upgraded it, it will then deal damage to the target provided it has already been damaged this turn. And this leads us again to the environmental focus of this character, and why it’s really important to use these attacks early on in the battle as you can damage enemies and then finish them off with an upgraded Quick Kick card, after which you get your card play refunded for finishing them off.

You can also modify this with Forceful to push enemies back further and deal even more damage upon impact. 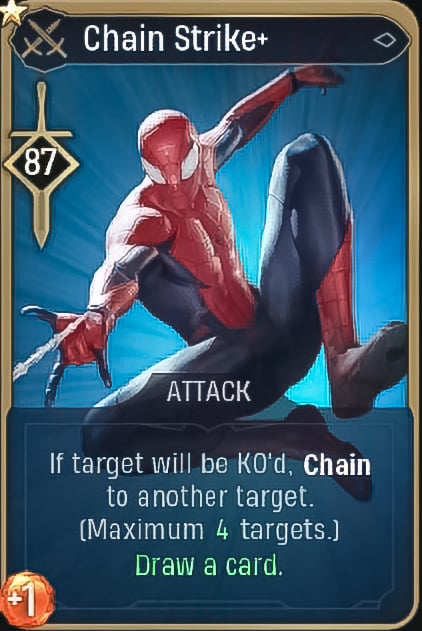 Next we’ll take a look at Chain Strike. This ability for Spider-Man essentially deals damage to a target, and then if he KOs that target, he then deals damage to the next. It generates a bit of Heroism, although not much, and when you upgrade it becomes possible to execute on up to 4 targets.

Now, Chain Strike is not worth it over something like Quick Attack in my opinion, until you upgrade it – you can usually kill 2 targets with it if played well. But once Chain Strike has been upgraded you will find it great for cleaning up the mess that you’ve left with all these environmental attacks. Maybe you’ve kicked things all over and some enemies died but a couple others are in low health, so this will enable you to finish them off, because ideally you want to be able to kill 4 targets with it if you can, or at least kill 3 targets and then damage a fourth target.

This ability doesn’t actually deal a very high amount of damage unfortunately, and Spider-Man does have an ability card called Webslinger that will increase his damage by 50%. However, I didn’t put it in here because we don’t really have any room for it without excluding some other ability, and since this is the only card that natively deals damage -unlike all the others in this build- it would kind of go to waste, as that’s not the focus of our build here.

Looking over Spider-Man’s other cards, you’ll notice that most of them do Knockback somehow. Kind of. Some are AOE, but they don’t deal high amounts of damage compared to other heroes with similar abilities. A couple of them are crowd control abilities, and they just don’t fit well into this build, especially early in the game as the best strategy then is to kill enemies – so CC isn’t that great. 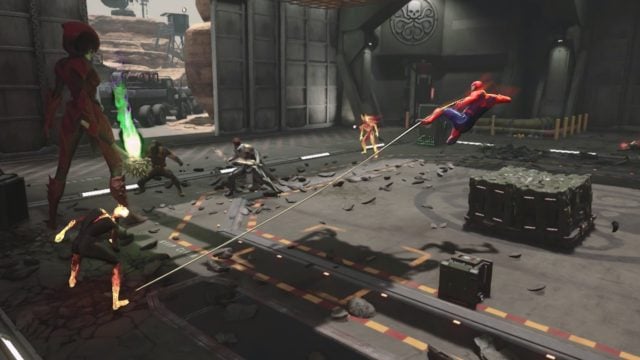 Knockback is always good in this game, as is Forceful Knockback. But more often than not, using the environmental-focused strategy suggested here is going to net you more kills than trying to forcibly knockback everything on screen – plus you’re just going to run out of card plays that way. Instead, you’re getting save card plays with Opportunist that you can then use for other more powerful attacks other heroes possess.

Spider-Man’s attacks are not that strong. His strength is really using the environment, and he shines more than any hero at making the best use of it (if you don’t count Scarlet Witch’s Detonate Ability). So you really want to capitalized on this fact and use environmental attacks to shore up that weakness of him.

Which Heroes to Use with Spider-Man in Midnight Suns?

Any hero that can hit multiple enemies is a good match for Spider-Man, because all the environmental attacks soften your foes up, and then you just need to finish them off. Sometimes you end up with a lot of weak enemies, so Blade is a good choice. Blade’s Daywalker hits a lot of enemies as well as Strike.

Wolverine has several attacks that hit multiple enemies, and Nico’s Witchfire is a nice spell she’s able to cast hitting up to four enemies, as well as finish them off. In fact, it’s a better choice than Spidey’s Chain Strike if you can use it, because it deals much higher damage. The kicker is you cannot control who it hits. 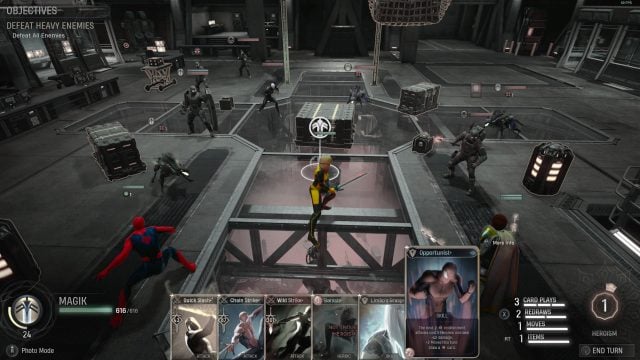 Doctor Strange is an interesting option too, as he can boost Spider-Man’s damage which is lacking by default. Doing so on Chain Strike and Quick Attack could really help you finish off targets, get card plays refunded if using Quick Kick and also continue that chain with Chain Strike.

I do want to mention one hero, though, and that is a particularly bad pairing with Spider-Man – Ghost Rider. Ghost Rider needs to fill up his souls meter and one of the ways he does so is through kills. When he’s killing, he needs to use environmental attacks to supplement his card plays in order to make that counter fill up quicker, so that he gets more health and by extension more damage. And that means that Spider-Man’s going to be competing against Ghost Rider. You’re either going to suffer slower build up on Ghost Rider, or you’re not going to get the free heroism off Spider-Man. So those two don’t really pair very well in my opinion, and I wouldn’t put them in a group together.

So this wraps up our Midnight Suns Spider-Man Build Guide. Spider-Man is a hero that works best when using the environment. He is better in doing so than in dealing damage by directly using his attack abilities. It can be done, it’s just not really an optimal approach. Also, due to his passive ability Bring the House Down, he is very good at sourcing Heroism points. All of it also meaning if you use him this way, our friendly neighborhood will fit in almost any group. 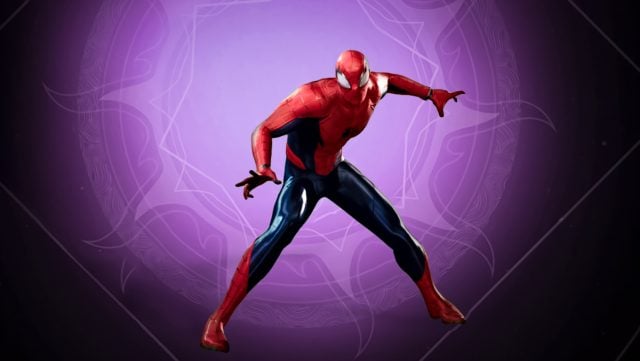