Nico is one of the two support characters you get at the beginning of the game with a huge focus on randomized effects, many of her cards like Blood Magic, Double Up, or Swarm and Curse have randomized effects out of a small pool. You’re not always sure which effect you’re going to get, because the randomized modifier is decided when you draw the card and you can’t know for sure until the cards are in your hand. This makes her very, very difficult to play at the beginning of the game when you don’t have your cards upgraded. 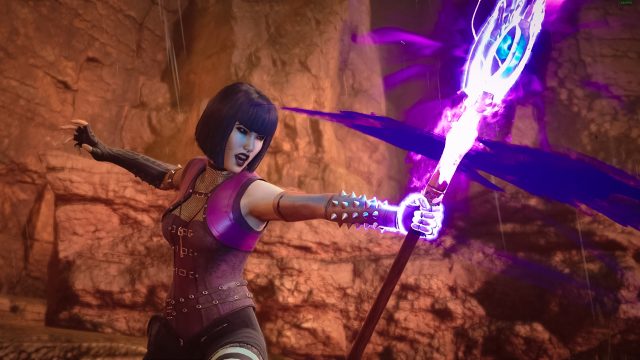 There’s less of a reason to play them if they’re not exactly what you need and you haven’t added additional modifiers to them yet. So our focus will be to try and remove the amount of RNG from her abilities in order to get more consistent results so that we can make her perform well not matter what she draws.

What Cards to use with Nico in Midnight Suns? 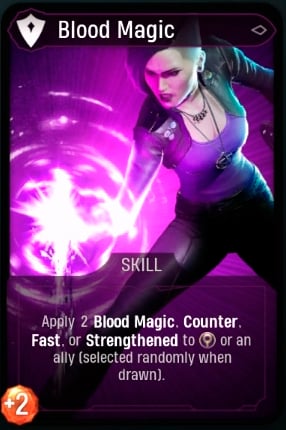 Blood Magic is an ability that applies 2 turns of either Blood Magic, Counter, Fast or Strengthened. The first one is basically life steal – meaning characters’ attacks are going to return health upon inflicting damage. The second one, Counter allows you to strike back at enemies after you take damage from them. Fast reduces the Heroism cost of that character’s Heroic abilities by 1, and Strengthened increases the damage of that character’s abilities by 50%.

You will usually use Strengthened and Fast, as they are the best ones unless used on a tank character – in which case Blood Magic and Counter are really good. Ghost Rider for instance make liberal use of Blood Magic, since he damages himself with some of his abilities.

When upgraded, Blood Magic draws one of the cards of the character selected. Therefore, having someone in your group like Iron Man, Magik or Captain Marvel  who use their own cards a lot will benefit from this ability as it facilitates their role within the group. Also, you gain Heroism by playing this card too.

A good strategy is to modify it in such a way that when you redraw you gain something, either Resist or Heroism, or maybe Block. This is because a lot of times this card is not going to be good for you in the circumstance you are in. Maybe you don’t need Counter because you need to take some enemy out, or maybe you don’t need to steal life because everyone’s at full health. So by cycling it with a Redraw and getting some effect, you’re actually gaining some impact from this card even if you don’t use it. 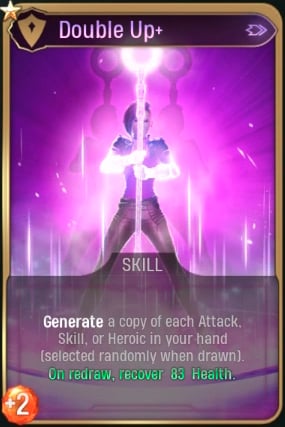 Double Up is a card that gives you Heroism as well as randomly picking between Attack, Skill, or Heroic cards in order to make a copy of each one of that same type in your hand. For instance, if it picks Attack, then every Attack card is going to be copied. This is yet again another RNG oriented card that you may want to redraw in the case you don’t really have many cards of the type chosen.

So it makes a lot of sense with this card to yield something when you Redraw, because let’s say, a good 50% of the time or so this card won’t benefit you. Therefore, gaining Heroism, Block or Resist is nice. Then you’re getting some benefit from it still being in your deck, even when you are unable to play this card.

The reason why Block, Resist or something else that gives Nico protection are suggested here is that her passive ability gives her a 33% chance to draw a card when she plays one of her cards, ONLY if she’s at full health. So getting something like these is going to prevent her from taking damage, keeping her at full health, allowing you to trigger this ability. 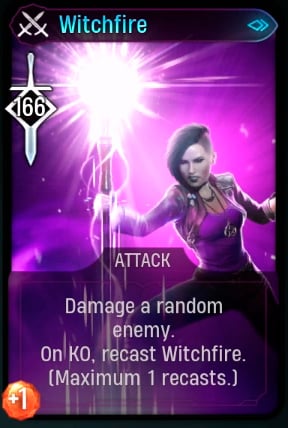 Witchfire is an ability that damages a random enemy on the battlefield, and if Knocked Out, recasts it one more time. Upgrading this card makes it so it recasts up to three times. So effectively what you want to do here is you want to have weak enemies on the battlefield, or a lot of enemies that you know are below the amount of damage this card is going to deal when you cast it.

Ideally, you’d get at least two or three Kos, maybe even 4 if you set it up right. However, it’s not really worth using until you’ve upgraded it, and is highly recommended you modify this to deal as much damage as possible. Otherwise, most of the time you’ll deal just a bit less damage than most of the enemies on the battlefield. 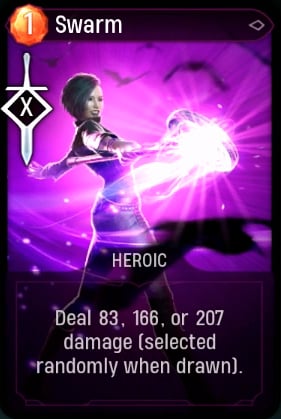 Swarm is a Heroic ability that deals a random amount of damage by picking among four different values when drawn. Sometimes it’s going to draw on the low end, which sucks, and sometimes it’s going to draw on the high end, which is fantastic. Therefore, having a modifier that gives you something when you redraw on this card is good, or getting something that adds damage to it so it’s more likely to kill in one cast – which is what we’re aiming to do here, wipe out one enemy on the battlefield. 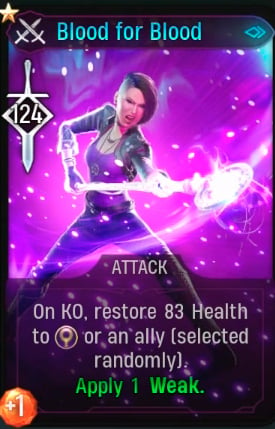 This card is a medium damage attack that generates 1 Heroism and restores health to Niko or another hero on the battlefield randomly – provided she kills the target. The upside of this ability is that you don’t need to take a turn to heal losing the opportunity to cause damage. And since this allows for both in one action, it’s really helpful even though it heals randomly – this is because generally it’s only one character that’s taking damage in your group if you’re playing right, so you can isolate which character is getting hit with taunts and things like that depending on which targets you.

Also, if Nico has taken damage, this is a great way to heal her back up to full in order to get that passive benefit from “And Another One”.

Which Heroes to Use with Nico in Midnight Suns?

Nico works really well in just about any group. She can deal a bit of damage, do some healing and buff her teammates, besides facilitating card draw of specific heroes with Blood Magic. She is good not only with heroes that need specific cards, like Iron Man, Captain Marvel or Magik, but she also does well with just about anyone since she can buff their damage with Strengthened for instance, and if it rolls, anyone’s going to hit harder.

If you have your damage dealer and a tank character, she’s probably a great third choice, if you don’t bring Doctor Strange. 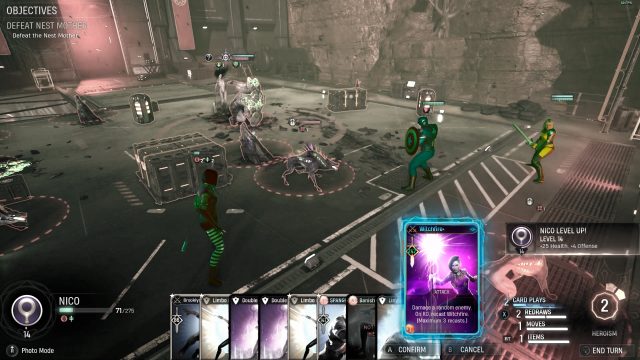 In essence, Nico is a support characters that you get at the beginning of the game, but probably want to take her along once you upgraded some of your other heroes, since her randomized nature may affect strategy if your party is unable to withstand enough damage early on.

She works best when removing as much RNG as possible from her, upgrading cards like Blood Magic, Double Up, Swarm or Blood on Blood to grant useful perks that may get you more consistent results, making her performance a lot more balanced.