Ghost Rider is one of the first damage dealer characters you get in the game. He often relies on taking damage in order to increase the damage he causes on his enemies. At first, he may seem to lack the proper appeal or be too difficult to figure out how to play with. However, if set up correctly, and with the right party, Ghost Rider can shell out a Hell of a lot of damage, pardon the pun. Let’s explain this by delving into the ability cards you’ll want to have in your deck. 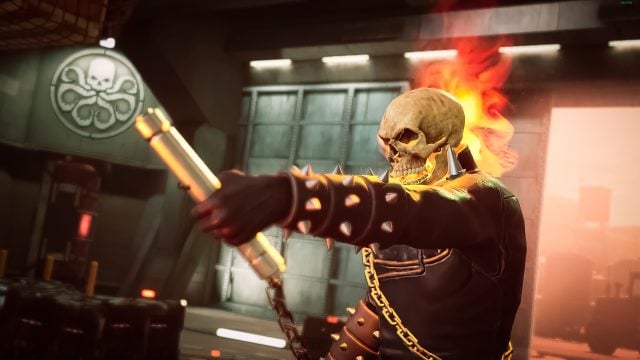 What Cards to use with Ghost Rider in Midnight Suns? 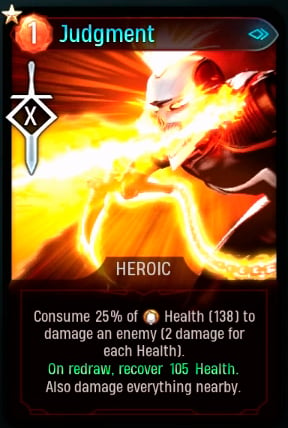 Judgment is a heroic card that costs 1 Heroism and consumes 25% of Ghost Rider’s current health (not Max Health). Meaning whatever his current health level is, it’ll deal two damage for each HP to all things around his target, as well as the target itself. Also, when upgraded, it changes this to nearby enemies, thus protecting your teammates.

At first glance, this might seem kind of bad. That’s a lot less Health, even worse if he’s already taken damage. And in top of that, there are other abilities, like Lash, that deal damage to himself when used too, so seem to conflict with this card. However, let’s take a look at his passive ability Soul Collector.

Soul Collector raises your Health when four Souls are gained. This increases your Max Health value as well as gaining this health value too. Now, the nice part about this is that the more you do that, the more damage potential Judgment has, because this health can get higher and higher and taking damage becomes a lesser deal since you now have a higher health pool. You can get one of the highest health pools in the game, if not the highest via this passive ability.

You gain Souls by killing enemies, each making Ghost Rider gain one – so he needs to get up to four enemies killed. You can also use cards that give you Souls too. And you can keep doing this over and over again in order to keep cranking up your character’s health, thus further pumping the damage of the Judgment ability. Of course, you always want to use Judgment when you’re at Max Health or as close as you possibly can, optimizing the amount of damage caused. 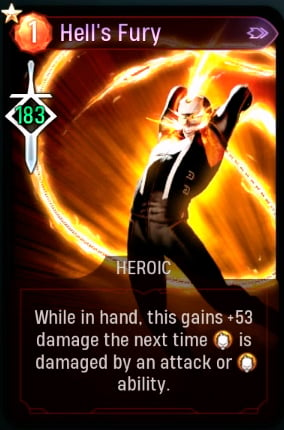 Hell’s Fury is another Heroic card, costing 1 Heroism as well. This is a very high-damage single target attack. And what it does is each time Ghost Rider gets hit, taking damage from an enemy or one of its own abilities, its damage gets increased.

This is a card you want to get in your hand early on and use it only after using other abilities that damage yourself. Try using it in round two, after being hit by a few enemies and using a couple of attacks – and this ability starts to hit like an absolute freight train at that point!

If you start off with Judgment, for instance, you’re going to damage yourself but by having Hell’s Fury in your hand, it’s going to increase the damage of that. So these two complement each other quite well, same as with Lash – as that ability also damages you thus increasing your damage with Hell’s Fury if it’s in your hand.

Also, is a great idea to modify Hell’s Fury with something that increases damage – like the one that does this if the target is not at full health. The reason this works really well is that by leading off with Judgment, everything’s weakened from start – and then you clean it up with Hell’s Fury, particularly enemies that have a good amount of Block. Judgment will rip off that Block, alongside some health, and then Hell’s Fury will usually deplete the rest of their 500 ~ 600 health bar. 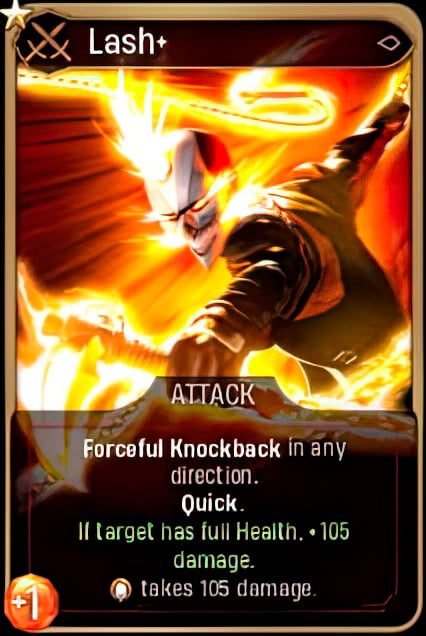 The next card you want to take a look at is Lash. This is a Quick attack that gives you 1 Heroism and it does ForcefulKnockback in any direction, meaning you can throw anything no matter if it’s lined up or not into pretty much whatever you want. He doesn’t really need to move, and it also deals damage to him – which is both good and bad. Obviously, it’s bad for Judgment, but it’s good if you’re trying to build up that Hell’s Fury damage. So there is some synergy here as well.

Lash can wipe out a really difficult enemy early on because of its Forceful Knockback, especially if you add a modifier that increases its damage to full-health targets, and you chuck it into an exploding barrel right away at the beginning, getting that extra damage as well as the forceful and explosion damage. This allows you to kill a tough enemy in 1 hit, making it a really good start! Also, because this is a Quick ability, you get that card play back – again, complementing the other cards very well. 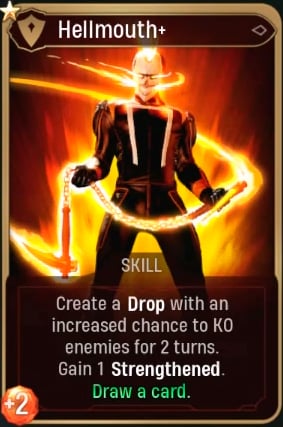 The reason we want to use Hellmouth is to give us Strengthened status and to draw ideally a Ghost Rider card, as well as to gain the Heroism. We don’t really need the drop as it’s kind of RNG-based, so it’s not within our focus. Getting Strengthed increases your damage by 50%.

So playing Hellmouth to increase your damage, and then using Judgment, will make you absolutely massacre everything. And then, if you finish with something like Lash and then Hell’s Fury, it’s over. You can clear the battlefield or at least the hardest hitting targets very, very quickly – giving you an opening for something like objectives. 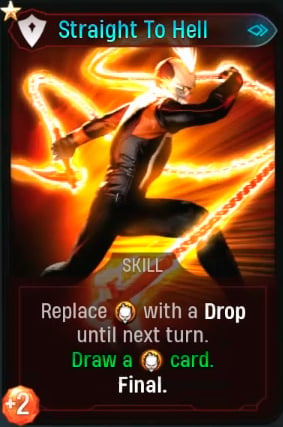 Straight To Hell is a card that gives you 2 Heroism upon use, and replaces Ghost Rider with a Drop until the end of the turn. Bare in mind this is his last action, so he cannot do anymore actions within that turn once you use it.

The upside of this is that if you use Judgment, a couple instances of Lash plus Hell’s Fury, he’s going to become weak, and by dropping Straight To Hell, he won’t be able to take any damage on the enemy’s turn. In fact, anything targeting him won’t be able to do anything at all. So it’s a great way to just disappear.

And if you upgrade this he’ll also recover health when he comes out of it next round, leaving him in a much, much better shape. You can also modify it to recover health if you redraw it, since a lot of times you don’t want to spend a card play just to disappear from the map. It is not always a great play, but if you Redraw it, he’ll still gain health and you won’t have to use a card play. It gives you some flexibility as you a get a way to heal him with his own cards.

“Not my first choice”: Other relevant cards 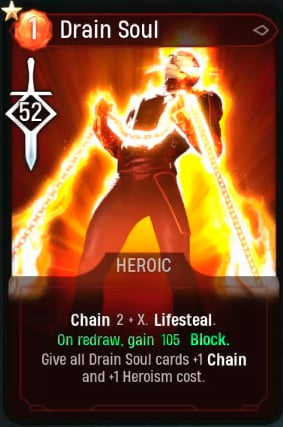 I really wanted to put Drain Soul in this deck, but you’re only allowed 4 Heroic cards. It could take the role of Straight To Hell because it could serve the same function essentially, but allow you to get damaging attacks that heal you instead of just healing yourself. Also, if set up with the modifier, you could discard it for healing and give you the same flexibility but with an attack option. However, you’re only allowed 4 heroic cards in here, so we couldn’t put it in. Additionally, every time you build up 4 Souls, you’ll draw one of these cards. It won’t be improved nor have any modifiers, but you’ll keep drawing these as that happens through out a mission. 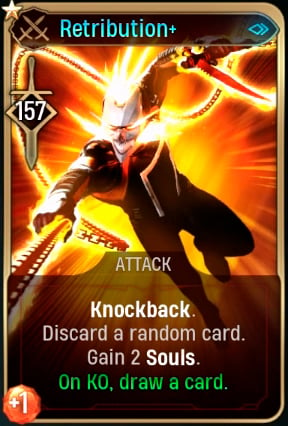 Retribution is another card that didn’t make it in here, and it’s a shame because it’s a really good attack that also gives you two Souls, thereby helping you get that health buff faster. However, it makes you discard a card at random, and again, not a big fan of RNG. We try to eliminate RNG when possible, and the fact that it could discard something potentially useful is a huge negative so I didn’t include it. You can use it if you want in place of Hell’s Fury, but I don’t recommend it.

Which Heroes to Use with Ghost Rider in Midnight Suns?

On the topic of which characters work the best with Ghost Rider, the first I’d recommend is Nico as she can potentially give him Strengthened or Blood Magic which increases his damage or allows him to heal himself with attacks – which is perfect for this because he needs that healing. She can also heal him with her cards, as well as draw or copy some of his cards.

Hunter is also a good choice because of the healing cards available to him, although unlike Nico, his cards outright just heal. Nico, on the other hand, attacks and heals at the same time.

Doctor Strange is one to consider as well, as he’s definitely good early on in terms of buffing Ghost Rider’s damage. Once you have Nico, though, she is probably a better option if you’re going to have that one support role – unless she is not optimized, then she’s not that great. 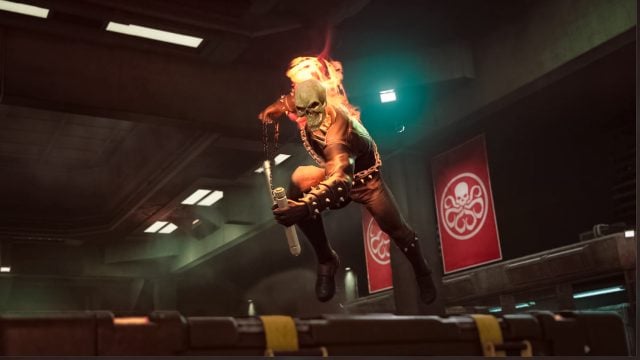 Ghost Rider is a little bit more of a complicated character than some of the others, and it may be challenging trying to figure out how to use his abilities effectively on your own. This is how we found him and the rest of the party to work really, really well. By him assuming this role and if card combination is optimal, Ghost Rider can prove to be a deadly damage dealer.

Also, one last tip before ending this guide – when killing anything, anyhow, or if you’re going to kill with environmental objects, make sure Ghost Rider is the one doing it. This will get him the credit for those kills and build up Souls that will inevitably increase his Max Health.