Doctor Strange is one of the two support classes that you get near the beginning of the game, featuring his passive ability: ‘‘Greater Good’’. This gives him a chance to generate Heroism every turn. So, on average, you’re going to get more heroism when he’s in your group. This works really well if you have very ‘‘Heroism-hungry’’ characters, such as Ghost Rider, who uses tons of it for his attacks.

Another particularly interesting thing about Doctor Strange is his ‘‘Enhanced’’ modifier, which makes some of his other abilities more powerful as you accumulate more and more Heroism. So you can exploit these abilities by hanging on to your Heroism until you cast them. You want to strengthen your abilities and only then drop all that Heroism into his big-hitting cards or other teammates Heroic cards. 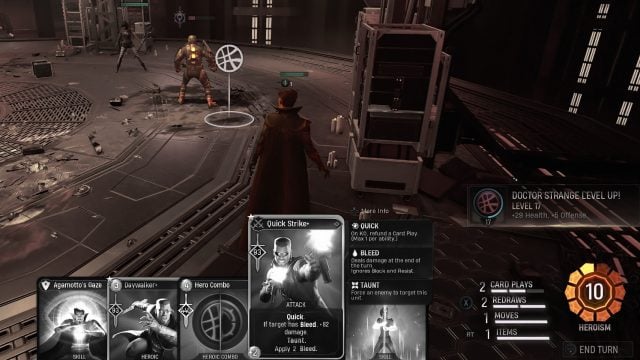 What Cards to use with Doctor Strange in Midnight Suns?

Blessing of the Vishanti 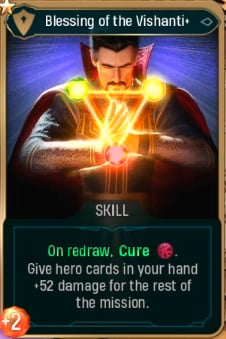 Blessing of the Vishanti applies extra damage to all the damage dealing cards in your hand (both Attack and Heroic), and when upgraded, it also applies this to these the cards for the duration of the mission. Better yet, this effect stacks! Meaning that after you redraw these cards you can use this card again, and the cards will get even more damage. Having this card in your deck means getting stronger and stronger over time. And considering sometimes missions go on for long periods of time, which usually makes things harder and harder, this card allows you to keep an even keel.

Also take note of the fact that damage is applied to each attack and ability card. Characters such as Wolverine, Blade or Spiderman (even some characters like Magic and Captain America that have big AOE) will get more damage from each hit. For example, each one of Blade’s multiple hits with the Daywalker ability will benefit from the extra damage.

This is specially useful near the beginning of the game, where your heroes don’t really have their decks optimized and you probably don’t know which cards to use, making Doctor Strange a great character early on. 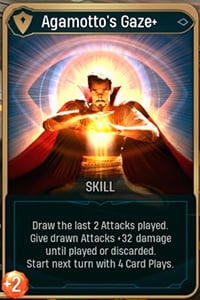 And for a similar reason, Automoto’s gaze is really good, because what this card allows you to do is pull back the last two Attack cards played, and then you start next turn with four card plays instead of three. So you’re gaining back some useful cards. A lot of times at the beginning of the game you don’t have very optimal decks, as I mentioned. And sometimes you have really powerful cards and some weak ones, and you want to bring those powerful cards back, because they are the best ones you have.

In order to give yourself a good start, you can bring them back and use them again instead of having to default to your weaker cards, which is great, and then it sets you up really nicely for the next turn where you have an additional card play and you gain Heroism from using the card as well. So it’s just a fantastic card to have. You don’t need it all the time, but you definitely need it sometimes. And when you do need it, it’s really good to have, particularly around the early parts of the game.

Also once you upgrade it, those cards will deal more damage on their next cast, which stacks with Blessing of the Vishanti. 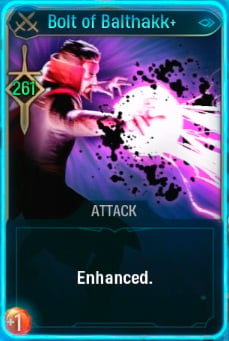 And another ability that I really like to use in my deck with Doctor Strange to give him some damage is Bolt of Ballhakk. And the reason that I like this ability compared to some of the other abilities that he has to deal damage is because when you have a lot of heroism, is because it doesn’t cost any Heroism. So you’re able to use the ability, maintain your Heroism to keep your damage high, and then dump your heroism with another character, which I really like. And it’s a very, very high damaging direct attack that just gets stronger and stronger. 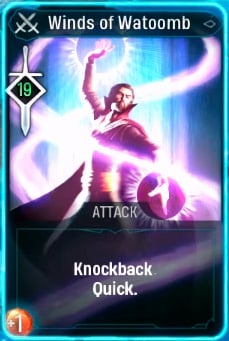 Another really good one to have, particularly early on, is Winds of Watoomb. This gives you a Quick Knockback, and Knockback is very effective at the beginning of the game and killing enemies easily. It’s less so as you move on through the game, and it’s better to have an ability that deals some damage and Knockback or Knockback forcefully because kKockbacks stop being as useful sometimes, depending on the scenario.

But what’s really great about this ability it gets Enhanced when you have at least three Heroism. When this happens Winds of Watoomb gains Forceful Knockback, which is a really strong knockback which deals more damage, and it allows you to knock enemies into things much further away. And because it’s quick, you almost always get a kill out of this when it’s forcible knockback. You can knock enemies off maps and that will refund the card play, which is fantastic. 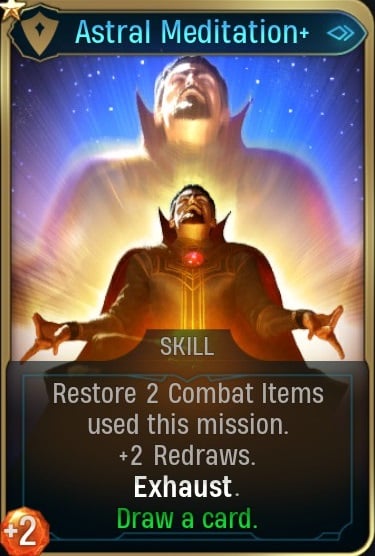 Consumables are phenomenal items in Marvel’s Midnight Suns that give you a good edge in combat, but cost resources to craft in addition of being a one-time use only. Astral Meditation allows you to refund those combat items that you use in battle. This means you can make some really powerful combat items and cast this card after using them to gain them back. This allows you to use your most favorite and powerful combat items in every mission without the need to crafting them again. If your aim is to play 100% optimized, you should absolutely have this in your deck

Which Heroes to Use with Doctor Strange in Midnight Suns?

In terms of party composition, Doctor Strange works great with just about any group of characters, specially those that have multiple attacks with their cards or large AOEs. The reason being each attack gets buffed, and these benefit the most.

These would be characters like Blade -with his Strike and Daywalker abilities, or Wolverine and Spiderman, whose attacks mostly hit in chains. It’s also beneficial for Captain America’s large AOE or Iron Man’s Surgical Strike.

However, Doctor Strange buffs everyone really well and is not misused if you have just regular attacks. Your damage dealers will deal more damage and since Agamotto’s Gaze allows you to pull those cards back after casting them (and buff their damage again when you pull them back if upgraded), you can just keep stacking damage buffs, making your DPS just hit harder and harder as combat goes on. 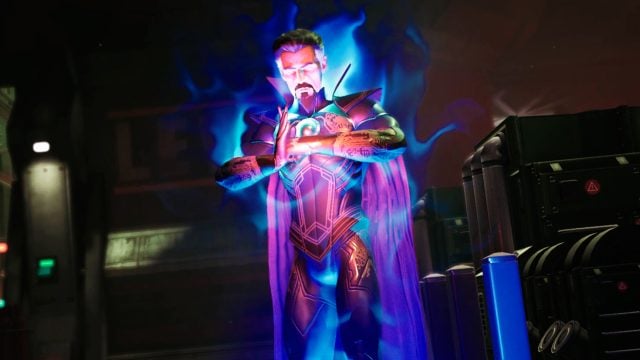 On top of this, Doctor Strange’s Blessing of the Vishanti ability isn’t like a modifier that you can’t stack multiple copies of, which just adds to the duration without increasing the damage. This means that if you bring someone like Nico for example, and use their Strengthened to boost your DPS character (let’s say Iron Man), using Blessing of the Vishanti makes his attacks hit even stronger but you didn’t just stack on top of each other. They are not getting in each other’s way, you both helped increase the damage of Iron Man.

In conclusion, Doctor Strange is a fantastic character to bring in your group, particularly if you have a focused damage dealer like Iron Man or Captain Marvel or even Blade to some degree. Having characters that pull their own cards to deal damage primarily is the best way to take advantage of Doctor Strange’s abilities.