Midnight Suns Blade Build Guide: How to use Blade – In this Marvel’s Midnight Suns Blade Build Guide you will learn how to use Blade in combat effectively as well as which Blade Ability Cards you should use in order to get the most and best performance out of this hero. We’ll also explore how to set the team up so as to have the party members make a good combination with him. Let’s delve into it.

Blade is one of the first damage dealers you get in the game and features the ‘‘Cold Blooded’’ passive ability. Cold Blooded gives Blade a chance to trigger Bleeding on enemies when struck by him. This chance goes up to 25%, which isn’t bad considering he has multiple abilities that reach different enemies. For instance, once upgraded, Daywalker hits four enemies and Strike hits three, so you have a decent chance of at least triggering one or two bleeds on enemies.

This deals damage over time to them, which is good, although the downside to bleeding is that won’t trigger until the end of an enemy phase. This means that when it’s the enemy’s turn, they don’t trigger the bleeding instantly, and if it the bleed kills them, it will only do so after they’ve attacked, so it’s not as good as outright killing enemies. 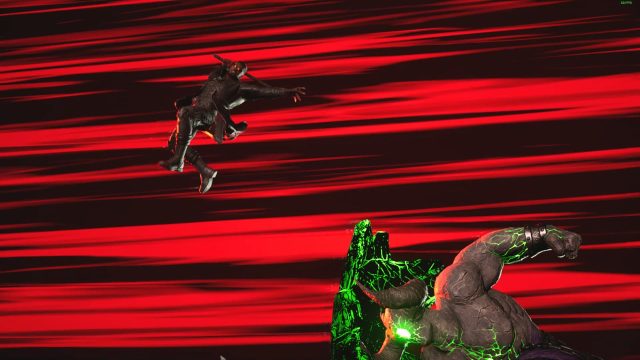 What’s more, Blade is really good at marking enemies via his ‘‘The Hunger’’ ability or through rolling modifiers on his Abilities that give you a card play back if killed within a certain amount of time. Even though it doesn’t have to be Quick, but you do have to kill them with a CARD or you don’t get that card play refunded. So if you mark an enemy and then they bleed out on their turn, you don’t get a card back! So think of bleeding as a kind of a double edged sword -pun intended- because you don’t want enemies you’ve marked to die from bleeding.

What Cards to use with Blade in Midnight Suns? 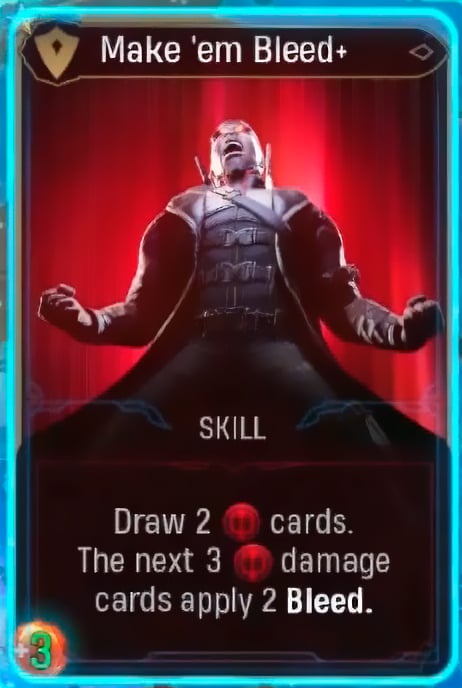 Make ‘em Bleed is blade’s way of drawing his own cards so that he can play them. Pretty much every hero has a way to do this. Not all of them, but most of them do. This gives you two Blade cards and applies 2 bleeding for two rounds for the next 3 damage abilities that he performs. In addition, Make ‘em Bleed also gives you a good amount of Heroism and once you upgrade it later on, you can modify it to give you even more Heroism, which is fantastic.

If you’re focusing on Blade as your primary damage dealer this is a great card to lead with. It’ll hopefully draw you a Daywalker or Quick Strike card, maybe even a Reaper or The Hunger. 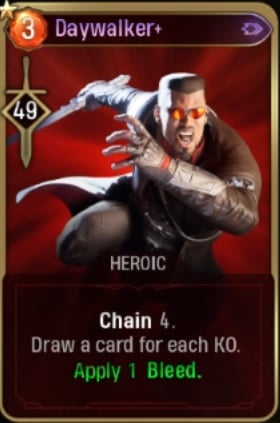 The reason being that if you have Make ‘em Bleed modified so that it gives you extra Heroism, you should have enough of it to play Daywalker, and this allows you to wipe out some enemies by hitting them 4x in whichever combination makes sense, and also put Bleeding on some enemies. You can stack 8 bleed stacks on one enemy if you hit them 4x, and then use Reaper to deal nearly 1k damage at higher levels.

Later on you can modify this ability to have Bleed on it, allowing you to set Bleed without needing Make ’em Bleed, and also adding another stack of Bleed if you play Make ’em Bleed already. It also allows you to get the most out of Quick Strike and Reaper, even if no Make ’em Bleed was played. 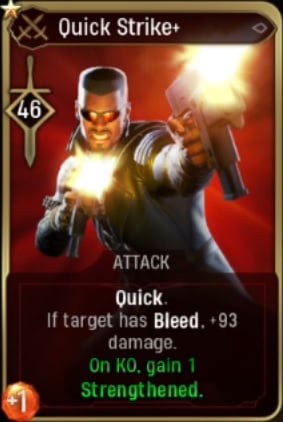 Early in the game, this is definitely going to be Quick Strike as you won’t have Reaper yet, and once you have Quick Strike upgraded, it’s going to deal additional damage to enemies that are bleeding. All those enemies you hit with Strike or Daywalker are going to be bleeding and this is going to be your way to finish them using this extra damage and refund the card play.

Because this is a Quick ability, is really, really important to save these for after you’ve set Bleeding on enemies if possible, so you get more out of it as you’ll be able to eliminate more dangerous threats. And obviously, later on in the game you can modify these in order to give you more cards back, or you can modify them to give you more Heroism or Strengthened. 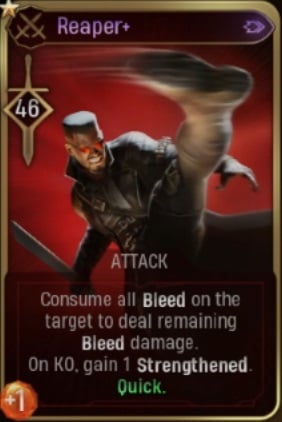 Finally, the reason Reaper was mentioned too is because this attack capitalizes on Bleeding enemies. This is a regular attack, it’s not Quick, but it consumes all the Bleed on the target, allowing you to pull that bleed damage instantly and finish off a target before the turn ends which normally does HUGE damage.

This is great because then they won’t get their attack, and once you’ve upgraded it, killing those enemy grants Blade Strengthened. This way you get to do more damage if you don’t have Strengthened from Quick Strike. Maybe you didn’t roll those modifiers. It’s a more reliable way to get it. And you can also modify this Reaper later to be Quick as well. So if you kill an enemy with it, consume that, you gain Strengthened and then you get your card played back. 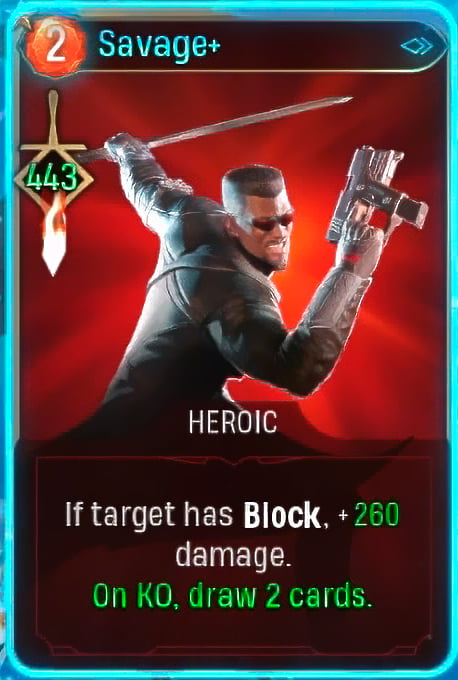 Savage is a really, really devastating Blade ability. It’s a heroic ability, meaning it costs Heroism (2 in this case). Savage deals a buttload of damage to a single target, and if that target has block, it deals even more damage. A lot of the objectives in the game have guys that are protecting with a shield, and they’re really hard to get through for most characters because most of them either spread their damage around a large AOE or have medium to light damage. However, Savage will punch through any enemy that has a shield and almost kill them – even wiping them off the map if you have Blade Strengthened.

You can deal up to about 500-600 damage total with this attack at level 17 or 18 and you can also modify this to deal even more damage or give you 2 cards back when you kill an enemy. Savage gives you versatility in terms of what you can do, because there are very few attacks in the game that can really burst through an enemy with a shield, and this is one of them. 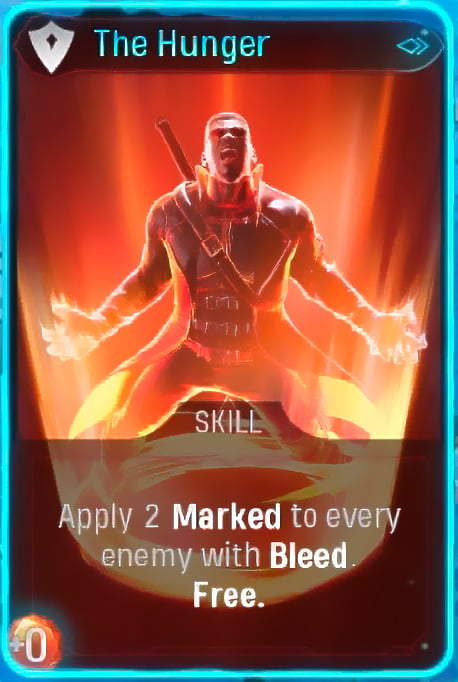 The Hunger is a free card and as such it won’t consume a card play when used, you can just use it and still have all your other card plays. This card applies Marked for two turns to bleeding enemies. At first glance this would seem really good, but unless you’ve modified Daywalker or Strike to apply Bleed, you must play Make ’em Bleed first, then Daywalker or Strike, and then this card and it’s hard to have them all in your hand at the same time. So I don’t recommend using it until you’ve done this. This card also works extremely well with Glaive, Blade’s Legendary card. 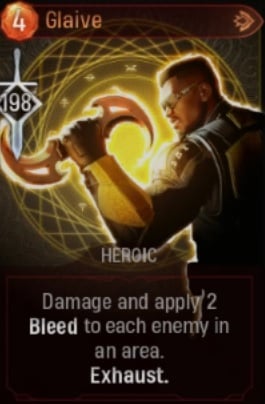 This is Blade’s Legendary card, and you acquire it after reaching 5 Friendship with him and completing his challenge. It hits all enemies in a large AoE and sets Bleeding 2 on them all, allowing you to immediately cast The Hunger for many Marked targets, and then use Reaper to mop up. It’s a one play per mission ability, so make sure to use it wisely!

Which Heroes to Use with Blade in Midnight Suns?

The really good characters to party with Blade near the beginning of the game are either Captain America, Doctor Strange, or Nico. These are great to get extra cards as well as buff him so that he deals more damage.

Doctor Strange’s Blessing of Vishanti adds damage to the attacks within your hand, and this is great early on in the game because when Blade’s attacks are played, he doesn’t really have the highest damaging abilities, as its damage tends to be spread out. Keep in mind though if I didn’t mention this already, that you can use his attacks to target one enemy or one enemy a couple times and then another enemy. You can burst down a single target or spread it out, giving these abilities a bit of versatility.

Additionally, if you upgrade Doctor Strange’s Blessing of Vishanti it’ll make it so that those damaging cards remain higher damage for the rest of the mission, and it even stacks. So you can use this multiple times to keep stacking damage on attacks, which is fantastic. 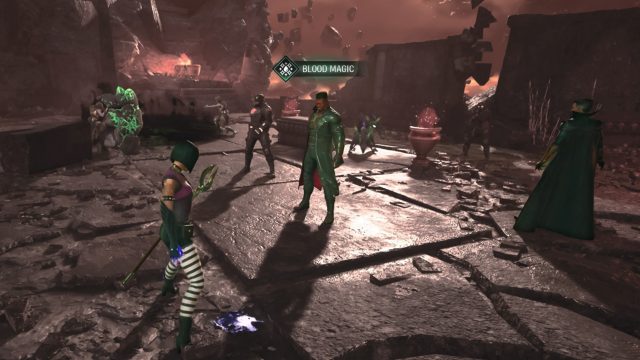 Agamotto’s Gaze is also a great Doctor Strange ability to complement Blade with, as it allows you to pull the last two attacks you played back, and once you’ve buffed this, it’ll give them extra damage until they’re played again. This will even stack on top of Blessing of Vishanti allowing you to play four cards the following turn. So if you can withstand the damage this turn you’re kind of sacrificing a damaging ability to play it next turn.

Nico has two really good cards for this build, the first being Blood Magic. This can make it so that you’re Fast with Blade, or you have Strengthened, Blood Magic or Counter. All these are pretty good, but you generally want Fast or Strengthened as Strengthened will obviously increase your damage, and Fast will make your Heroism cost for Blade abilities lower. And since we use Daywalker a lot, that’s really, really good for this. Once this ability is upgraded, it also allows you to draw a card of the hero that you casted on, so if you cast on Blade, you’ll also draw a Blade card.

The other card is Double Up. This essentially allows you to double every card in your hand of a random type (Attack, Skill or Heroic), meaning it’ll pick one of the three and double all the cards of that type in your hand. For instance, you could have two Daywalkers in your hand and have them increased to four Daywalkers!.

And Captain America not only is able to give you block with Tactician thus protecting you, but he can also draw cards in general, which will eventually net you some more Blade cards to use. Brooklyn Handshake and Spang! also nets you cards, the latter when attacking and killing with it – so you’re able to get a lot of card draw with Captain America, making those abilities really useful for any character that needs them. 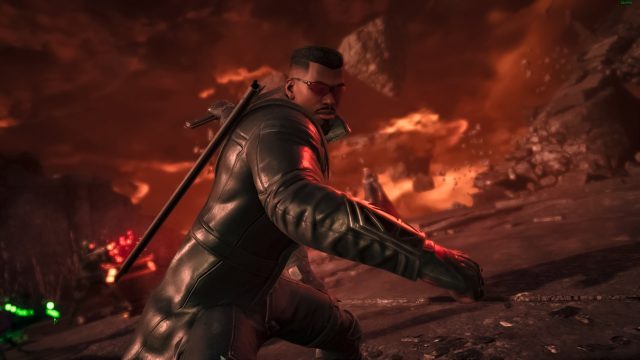 At the end of the day, Blade is a really good lead off DPS. Meaning that if you draw Make ‘em Bleed and subsequently Daywalker at the beginning, you instantly get Bleed on a bunch of enemies, setting up the board really well for yourself. He’s a really, really good setup character that after those few attacks is not as strong, unlike someone like Iron Man, who gets stronger and stronger as you keep drawing more cards. So you sort of start interchanging his cards for other heroes when it makes sense to use them, as opposed to just trying to play Blade cards.

In my opinion, it’s very hard to play Make ‘em Bleed a second time in any given scenario, because usually by that point most of the enemies are dead and you just need to do attacks or have other card draws for other heroes that make more sense.

On top of this, a really good thing to get on Blade is Strengthened. You can use Nico to buff Strengthen on him at the beginning of the game, but later he’ll be able to buff it himself via Quick Strike or Reaper, allowing him to be a bit more independent.