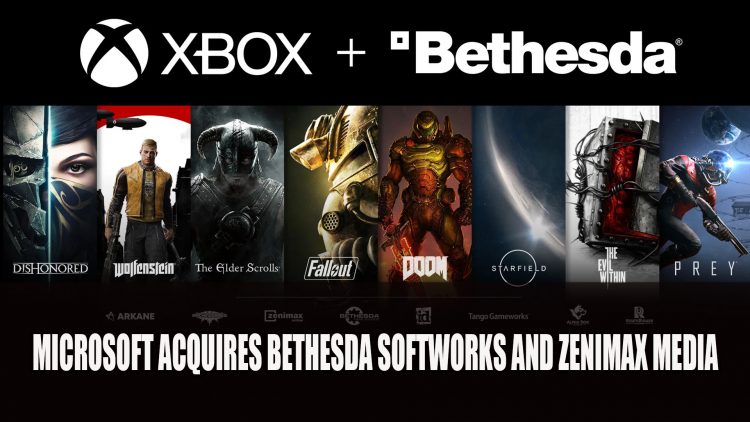 Microsoft have announced they are acquiring Bethesda Softworks and their parent company ZeniMax Media for a deal worth $7.5 billion.

In a surprising turn of events, Microsoft have announced they are acquiring Bethesda Softworks and Zenimax Media in a deal worth $7.5 billion. The acquisition grants Microsoft a number of major RPG franchises with it including Fallout and The Elder Scrolls.

According to a statement shared by Bethesda’s vice president of PR and Marketing Pete Hines on Bethesda’s website, the acquisition by Microsoft won’t change Bethesda’s vision when it comes to “making great games”:

Yes, it’s a big change for us, but after taking a minute to absorb the magnitude of this acquisition, we’re going to continue doing what we know and love: making great games. We’re going to keep trying new things. We’re going to take the same passion we’ve poured into what we do, and the passion that our community brings to the things we make, and do even better.

Pete Hines – Vice president of PR and Marketing at Bethesda

The post also outlines some questions that fans will have including about Deathloop, Ghostwise, Q4 for The Elder Scrolls Online, as well as DOOM Eternal DLC. Of course sliding in the end “WHEN THE HELL WILL YOU TELL ME ABOUT STARFIELD?”

We already know that Bethesda are working on the next RPGs, with Starfield, a sci-fi set adventure still with very little to go on. Then there is the Elder Scrolls 6 which is still very much under wraps, apart from a few tidbits here and there.

It looks like we won’t be seeing much of either for while, but Starfield is the next one on the list. Earlier this year Pete Hines mentioned we’d be seeing more Starfield “someday”. The press release also states they are looking to bring Starfield to Xbox Game Pass as a day one launch. This means a number of Bethesda titles will be coming to the subscription service that is offered both on PC and Xbox consoles.

Bethesda is joining the @Xbox family.

Microsoft also acquired Obsidian and InXile Entertainment back in 2018, which means they’ve got quite the number of RPGs under their belt. With Xbox Series X also releasing this November, things only seem to be looking up for Microsoft.

In case you missed it, we have a video up on our Youtube channel which goes over what the future may hold for Bethesda due to this acquisition:

What do you think about Microsoft acquiring Bethesda Softworks and Zenimax? Let us know in the comments below.

For more news be sure to read next Cyberpunk 2077 Will Have A Shorter Campaign As Many Did Not Finish The Witcher 3 and Discord Nitro Partners With Xbox Game Pass; Get 3 Months Free.

One comment on “Microsoft Is Acquiring Bethesda Softworks and ZeniMax Media”