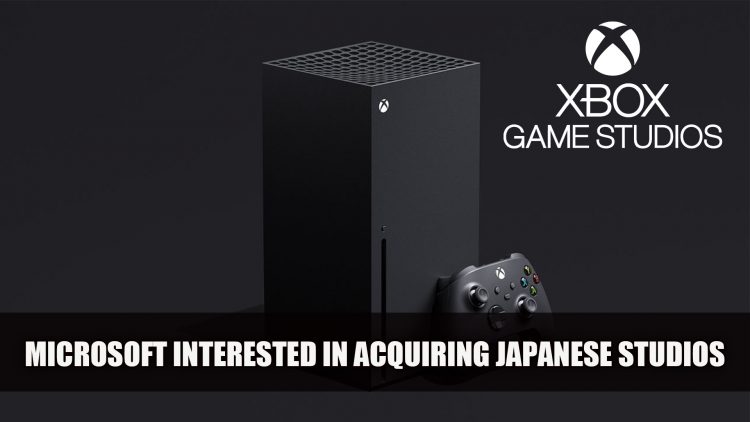 Microsoft are said to be in talks with a few Japanese studios, hoping to acquire them and have them join Xbox Game Studios.

In a recent report by Bloomberg, Microsoft seems to have approached a few different Japanese studios in order to add new developers to their Xbox Game Studios.

The report states that these are several small and big Japanese studios, as they have confirmed that they have been discussing with Microsoft in joining the Xbox family. No reveals of outcomes have been shared as of yet, but this could be an interesting move for Microsoft.

This isn’t the first time Microsoft has been trying to attract some Japanese developers, previously they had extended offers to Platinum Games (known for such titles as Nier Automata) to join Xbox Game Studios but were not successful in their negotiations. There is also Kojima Productions which is one of the largest indie developers in Japan currently, but this would be quite a big acquisition to try and land. Koei Tecmo is also considering releasing more games on Xbox if they continue to show their interest in Japan according to president of the publisher, Hisashi Koinuma.

This is quite the smart move for Microsoft to focus on, considering the number of big Japanese themed titles that released this year such as Ghost of Tsushima and Nioh 2, it would make sense for Xbox Series X and PC via Xbox Games Pass to land a few titles.

This would also secure more of a Xbox fan base in Japan, it is the “second-largest market after the U.S.” according to analyst Hideki Yasuda at Ace Research Institute in Tokyo. Previously it has been dominated by Playstation and Nintendo Switch, however PS4 didn’t do as well according to Bloomberg as its predecessors upon launch, as well as Xbox One only arriving in Japan a year after the U.S. launch. To say the least it’s been a bumpy ride for Xbox in Japan. But that could change with the next-generation of consoles Xbox Series X|S and the ever strengthening Xbox Game Pass on both PC and Xbox consoles.

That’s not to say that Microsoft hasn’t been busy at all this year, landing Zenimax and Bethesda Softworks, which means they now have quite the lineup of RPG developers under their belt, adding to their collection which also includes Obsidian who are currently working on Avowed and inXile who are already working on their next AAA RPG project now under Microsoft.

Xbox Series X is launching this week, are you picking up the console? If you’re interested to know what we thought of the latest console be sure to check out our Xbox Series X Review: A Hell Of A Start For Xbox Series X Games.

For a rundown of recent news find it here in Top RPG News Of The Week: November 8th (Elden Ring, Demon’s Souls, Dragon Quest 11 And More!) and don’t miss out on Demon’s Souls State Of Play Shares Character Creation, Gameplay Mechanics And More.