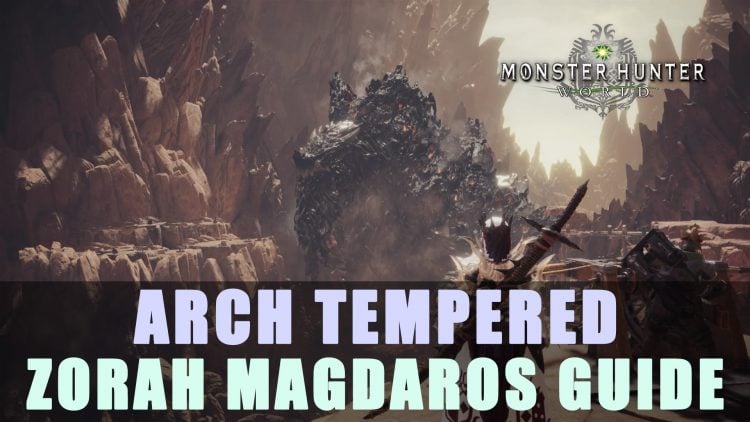 In order to tackle Arch Tempered Zorah Magdaros there are few items you should prepare to bring into the fight with you.

Start by eating something at the canteen which should always be a given when heading to battle. Exit the camp and left head towards the hitching post. You will be transported by drake onto Zorah Magdaro‘s back. Pop an attack seed while running at the first Magma Core. By the time you finish eating, you will be close enough to wear your Temporal Mantle and DPS the core.

Once that core is down, head West towards the second magma core. If you are soloing or don’t trust your teammates, this is the second core that should be tackled. If you are playing with an organized group or good randoms, this magma core should be taken out by now. It sits at the bottom of a sloped hill so be sure to abuse those aerial attacks.

The third magma core is tucked away so players will have to run, climb and jump down to it. This one is in an enclosed location so be sure to wear your Fireproof Mantle. The explosion from the magma core is telegraphed and is shown on the core itself allowing players to completely avoid it while dealing damage.

Next, Nergigante will crash the party so show him whats up. This Nergigante will not be tempered or Arch Tempered like other Elders in Arch Tempered event quests. It shouldn’t take long to defeat him, in fact, players may have some down time waiting to halt Zorah Magdaros at the barrier. Kick back, snap some pictures, or go mining during this time.

Finally, we get to the real fight, the most important part here is to restrain Zorah Magdaros when he tries to shoot a fiery breathe attack on the barrier as 3 shots will destroy it. Players should search for One-shot Binder on the top right section of the barrier or the bottom left barrier near the Dragonator. Besides restraining, there isn’t much to watch out for. Zorah may ram the barrier taking out an insignificant portion of its health.

Team Formation for this final section should be 1 person near each of the NPCs and the last person should be in the center portion of the barrier. In this layout everyone can help unload the cannons of the NPC while also loading their own. Players should make sure at least 2 people have the One-shot Binder to restrain Zorah when he gets feisty and tries to burn down the barrier.  Lastly, the center person can destroy the Magma Core located near the back of Zorah neck using the cannon or climbing on him. Collect your rewards of some Warped Feystones, Zorah Tickets, and some Sullied/Shining Streamstones.