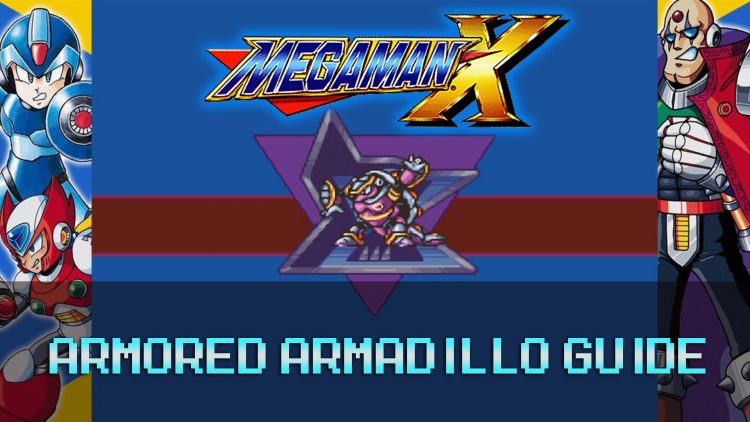 Capcom’s Mega Man X action-platformer is split into 10 stages, the first being a tutorial or introduction stage, 8 main stages and then the final stage. Any of the 8 main stages can be done in any order you choose but clearing a stage will have an affect on other stages for better or for worse, so be alert on the select changes. Below is a guide for the Gallery stage and it’s boss, Armored Armadillo. I will explain how to defeat each enemy and boss in this guide.

In this stage you will face few enemies before meeting the final boss called the Armored Armadillo. You will come up against Mole Borer and Mettool C-15. By completing this level you will receive the Rolling Shield, which is the Launch Octopus‘ weakness. Read on to find out which strategies to use against these foes. 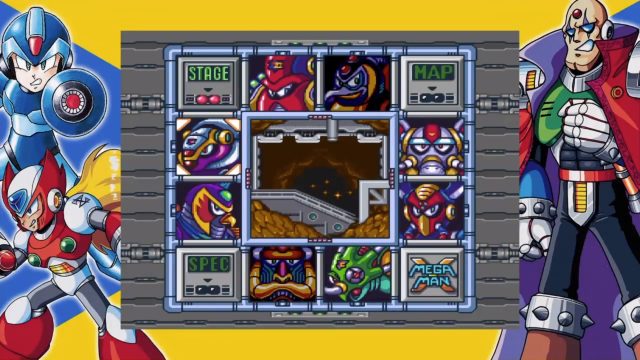 At the start of the stage, jump onto the mine cart and it will take you past numerous Batton Bones, Batton M-501, and Flammingles. At the end of the path the cart will fall into a hole, so be sure to jump off before reaches the pit. There will be some bats and a bird enemy up ahead, take them out and progress. Players can elect to stay here and move back (left) to re-spawn the bats, doing this will give you more of a chance to gain extra lives as the bats can drop these. Continue moving forward, eliminate the several bats and birds in your path.

There will be a sub tank that can be obtained once players hop inside the hole and jump up the wall. You will next encounter a Mole Borer, a debris demolishing robot, that will follow a straight path.

There will be another mine cart players will take for a joyride. Take the cart until the second pit of spikes and hop off to get on the path of the Heart Tank. Fall into the hole by dashing until you are ahead of the Mole Borer, then grab the heart tank.

Jump over the spike pit, hop onto the ledge, and then get on the mine cart. Stay on the left side of the mine cart to avoid getting hit while shooting down the Metal Wings. Wait until the cart jumps over the large hole and jump to the base of the wall to reach the boss.

Armored Armadillo has a few attack patterns that consist of him bouncing around the room. Below are the movements he will make:

Players will receive Rolling Shield at the end of this stage which is Launch Octopus’ weakness. Players should proceed to fight Launch Octopus next. Check out the video below to see the whole stage in action:

If you want more Mega Man X guides be sure to check out out out Mega Man X Trophy Guide to collect all the platinum achievements. You can also checkout the Highway Stage Guide for a step-by-step in defeating all enemies and bosses as well as our Mega Man X: All Body Armor Upgrades, Heart, & Sub Tanks Guide to locate all upgrades, heart and sub-tanks in the game.