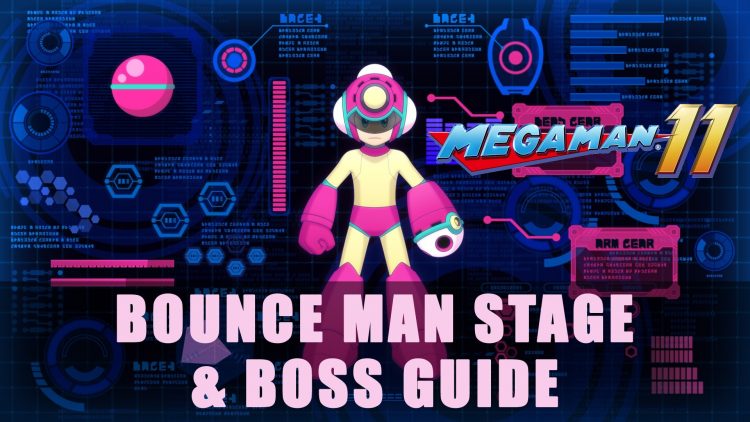 Capcom’s Mega Man 11 is part of the 30 years anniversary celebration and is being directed by Koji Oda and produced by Kazuhiro Tsuchiya. Mega Man 11 adds the Speed and Power Gear while keeping the original style of Mega Man most of us have grown up with. Mega Man 11 is an action-platformer which is split into 12 stages, 8 main stages and then the 4 end game stages. Any of the 8 main stages can be done in any order you choose. Below is a guide for Bounce Man stage and boss. I will explain how to defeat each enemy and boss in this guide.

After spawning climb the ladder, jump over the Gabyool  and then proced to climbing the following ladder. There will be a Cannopeller II, a moving hover robot, that will shoot projectiles in a straight line towards the left of the map. Jump on the rubber balls to propel yourself higher to reach another ladder. While ascending it be careful as a Wall Blaster, a blaster cannon, will be firing towards you. Once you are at the top of the platform, jump down as indicated by the arrow and have the yellow platform send you towards the ladder to reach the next section. 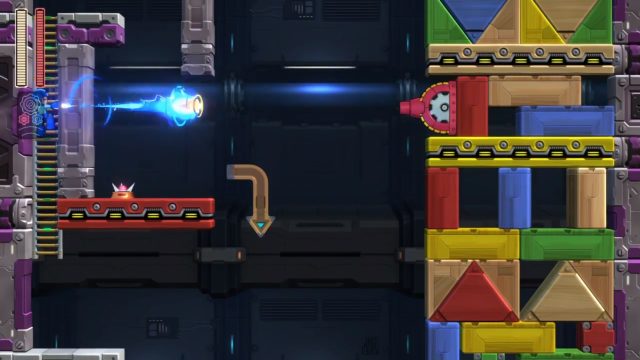 Take out the Wall Blaster while perched on the ladder

Run and jump towards the balloon walls to have them ricochet you towards the higher platform. Shoot the Bunby Balloons to have lower part of the enemy drop towards the ground or aim directly at the body to eliminate the enemy. Use the balloon floor as a way to reach the ladder. 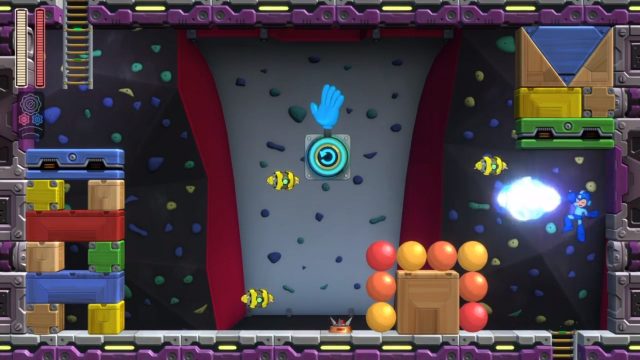 Take out the 3 Lyrics, the small yellow flying enemies you met back in Block Man‘s stage, jump onto the balloon to shoot the hand. Once shot, land where the blue hand was and wait for it to send you flying towards the ladder.

Quickly fire your Mega Buster at the 2 Boyorn, the bouncy enemies, to send them aback until they are defeated. Proceed to hop under the ladder so the balloons below you help you reach the ladder. 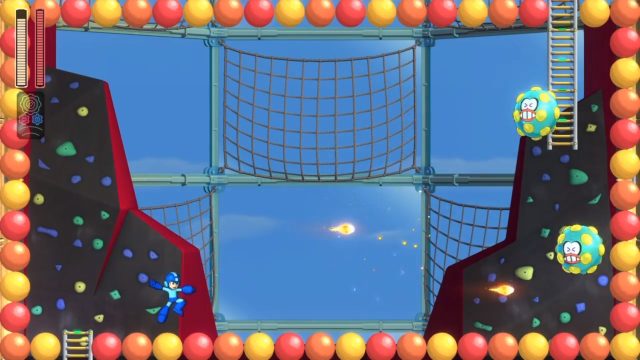 Use the Bayorns, the balloon like enemies to help you reach the ladder above

Shoot the Boyorn to allow yourself more time to properly shoot the pink hand and get into position. Take out the Cannopeller II, get slapped towards the right area. Jump towards the walls to reach the higher platform in order to shoot the blue hand. Once you are in position, wait until you are flung towards the ladder. Use the Mega Buster to pop the 2 Boyorn blocking your path to the ladder. 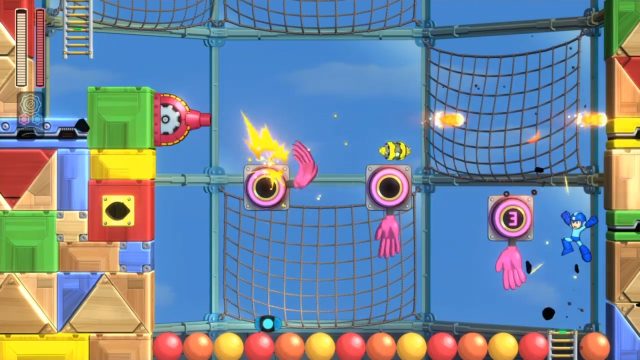 Shoot the pink hands as you are jumping to use their position as a platform. Take out the Wall Blaster or time your jumps to avoid the projectiles as you jump towards the ladder. Avoid being hit with the pink hands as they interfere with your progress instead of helping. Be careful to not be swarmed by the Lyrics.

Hop over the Gabyool to reach the back wall and jump up to reach the higher part of this section. Use the Speed gear near the top to give yourself more time to properly land and jump off the bouncy balls while avoiding the 2 Wall Blasters and the Lyric.

Shoot the Boyorn first then the pink hand and wait for it to hit you closer to the bubble walls, these will sling you towards the mini boss gate.

The frog will release his tongue towards the ceiling and use it as a method to land on top of the player. Run forward or slide forward until you have reached the wall to avoid being caught by his tongue as an attack. If you get caught, quickly mash all buttons to break free and counter attack when the frog is stunned. Fire at the frog in between attacks and eventually he will split into 3 Boyorn enemies and a small Pump Master K. Take out the Boyorn as quick as possible while you focus on the Pump Master K since he will inflate another frog suit. Repeat the steps above until the Pump Master K is destroyed. 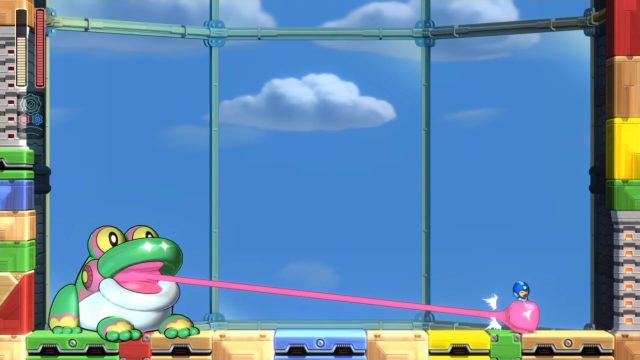 Avoid the frog’s long tongue, as it will hold you in place

Take out the Bunby Balloons and watch out for the Tosanaizer V, the jack in the box-esque enemy that will jump up from the pit attempting to prevent you from progressing forward. Use Speed gear during this section to give yourself more time to respond to their threats as well as make sound decisions. Shoot the blue hand to continue on the path to leave this dangerous section.

Anti-Eddie will steal the energy item in this section, use the Speed gear to lengthen the time you have to retrieve it. Slide throughout this section while shooting the Boyorn. Climb up the ladder to get to the next section.

A quick way to bypass this section is take the lower path and position yourself under the ladder. Use Rush Coil to help you reach the ladder bypassing the pink hands.

This fight will be similar to the first mini boss you fought with the only difference being the bouncy bubbles will act as the ground. Jump over the frog as it swings towards you. Use the same tactics I listed previously to defeat him. Pile Driver weapon works very well for the frog balloon and Power Gear Block Dropper works well for Pump Master K. 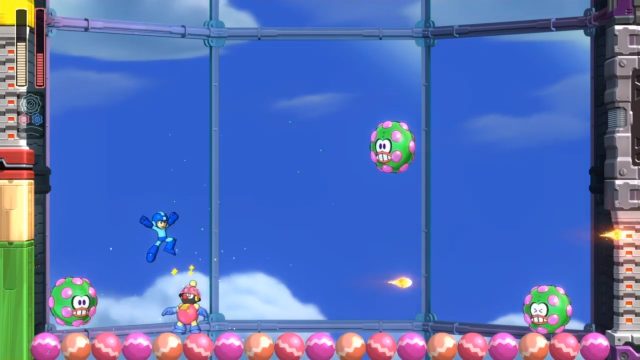 Eliminate the Bunby Balloon, and avoid the Gabyool as you make your way towards the ladder. Continue ascending using the bouncy platforms while avoiding being shot by the Wall Blasters. Drop down and be ricochet up to the next part. Take out some of the metallic balloons before falling down again to be bounced towards the right. Climb the ladder to reach the final section.

Take out the last Boyorn and get ready to fight the final boss, Bounce Man.

Bounce Man will start the match against the wall and attempt to punch you with his rubber arm. Use the Speed Gear to help you avoid it as you release a charge shot. He will then proceed to bounce around the room. Use your Mega Buster to fire a charge shot at him when you have an opening. When Bounce Man reaches the apex of this bounce, he will then corkspin towards the ground. This is easy to avoid and afterwards he will redo his attack patterns: Bounce, punch, bounce around, corkspin. 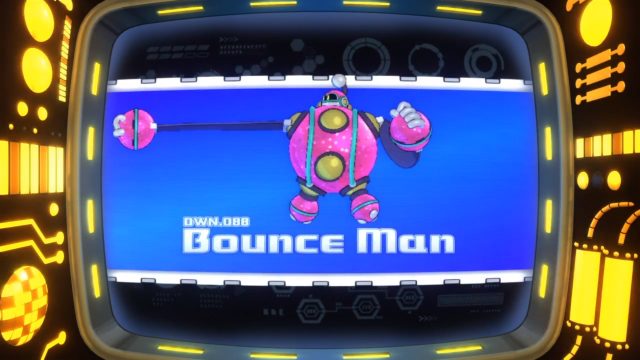 Bounce Man’s weakness is Pile Driver from Impact Man. Simply use Pile Driver on Bounce Man which will cause him to break into several pieces and bounce around. His body can still be injured during this so use Speed Gear to aim your shot and fire again with Pile Driver. Even on Super Hero mode normal Pile Driver works really well despite using Power Gear Pile Driver is an option.

Below you can see a guide in action for defeating him solely with the Mega Buster and another guide on how to defeat him on Super Hero Mode:

Mega Man 11 is available for PC, PS4, Xbox One, and Nintendo Switch. There is also a demo available on each platform.