In this Mass Effect: Legendary Edition Feature, I’m going to give you an overview of the major changes from one Mass Effect game to the next. Specifically, I’ll dive into how Combat Mechanics and Builds have been streamlined when it comes to Talents, Powers, Weapons, Armor and Upgrades. If you’re curious about how these vary in each Mass Effect game, then this Feature is for you.

In Mass Effect, you play as Commander Shepard, whose gender, origin story, Class and appearance you can choose, before diving into the game. The year is 2183 where mankind has mastered the art of immediate interstellar travel thanks to advanced technology in the form of Mass Relays. These have been left behind by a mysterious race, which is central to the trilogy’s overarching story. Your goal as the commander is to complete quests for the betterment of the entire galactic community that comprises a number of races such as Humans, Turians, Salarians and Asaris, to name a few.

In Mass Effect 1, Talents and Abilities are two separate entities. You have a total of 12 Talents, which are all unlocked when you progress in the game. This is what you rank up to enhance your build. When Talents are high enough, you either unlock Abilities as well as its stronger versions, or additional Talents. An example is the Adept’s Barrier Talent. When it reaches Rank 4, you’ll unlock the Stasis Talent. Meanwhile, when it reaches Rank 7, you gain access to the Advanced Barrier Ability to further protect you from damage. There are about 9 to 10 Abilities available per Class to use in Combat.

In Mass Effect 2, Talents and Abilities have been combined and are now known as Powers. The total number has been streamlined from 12 Talents to just 7 Powers, which also includes one Bonus Power that you get from completing your Squadmates’ Loyalty Missions later on in the game. Additionally, these now share a global cooldown, which means that you can’t spam several of them at once. As an alternative, you can use your Squadmates’ Powers while waiting for yours to recharge. 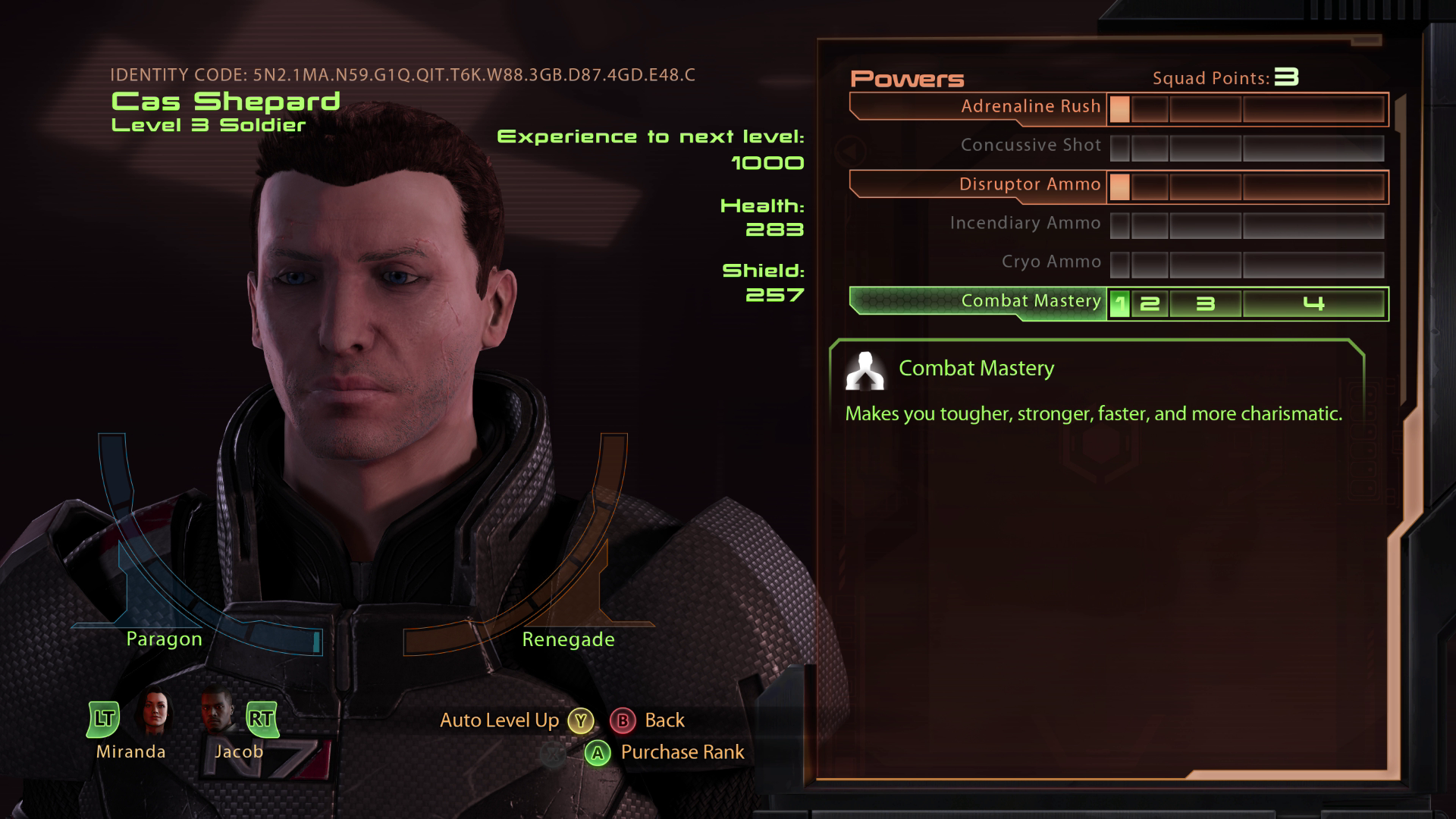 One of the best updates in this game is the ability to respec your Power Points, which you can do after finishing the Horizon Mission and obtaining the Retrain Powers Upgrade, which is Tactical Shift.

In Mass Effect 3, the total number of Powers available to you has increased from 6 to 9. This is in part due to the return of Fitness, which toughens your character because of the HP and Shields bonuses you receive. Additionally, you can also choose one Bonus Power that you unlock by completing DLC Missions or by speaking with your Squadmates often. What’s unique this time around is the execution of Power Combos, which causes massive explosive damage to enemies. It can be done by sequentially combining Powers such as a Source Power and a Detonator. 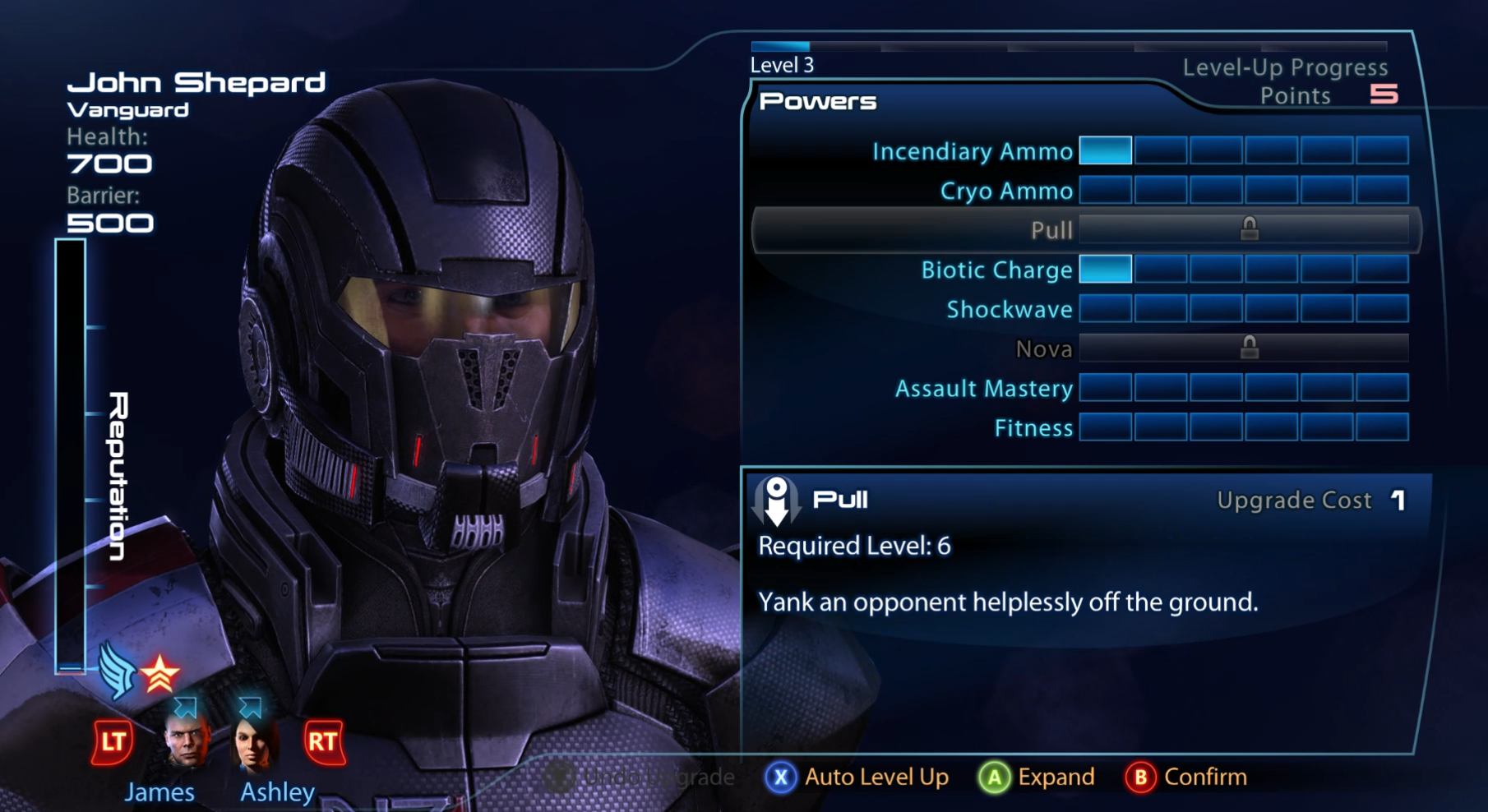 In Mass Effect 1, there are 4 Weapon Types, namely, Pistols, Shotguns, Assault Rifles, and Sniper Rifles. The Weapons you can effectively shoot with are dependent on what your Class is proficient with, except for the Soldier, which is trained to use all Weapons. Note that in the Legendary Edition, your accuracy is no longer penalized if you shoot with a Weapon you don’t have proficiency with. Instead, you simply won’t get the accuracy and damage bonuses you’re supposed to get since you don’t have its equivalent Talents and Abilities. The default Weapon that all Classes are fully equipped to use is the Pistol, which deals decent close and mid range damage. 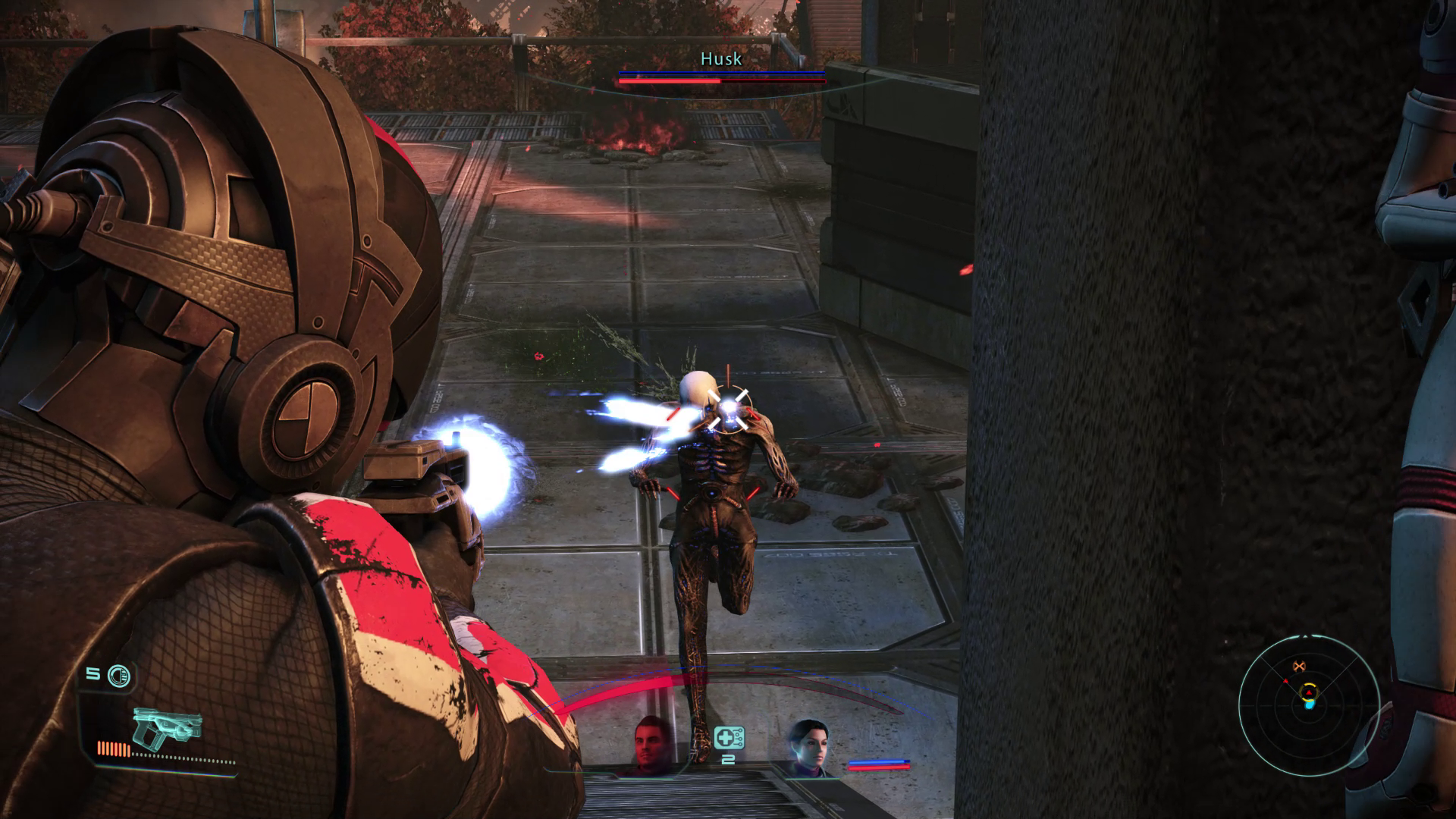 When it comes to upgrades, you have Weapon and Ammo Mods. Weapon Mods improve your Weapon’s damage, accuracy and heat dispersion so you can fire shots more often prior to overheating. In this game, you don’t use ammo. Instead, there’s a Heatsink Capacity attribute, which is a threshold that tells you the time in seconds before the Weapon overheats, given that you shoot in quick succession. On the other hand, Ammo Mods refer to the type of damage you deal with your Weapons. One common mod is the Tungsten Rounds to inflict extra damage against Synthetics or robotic enemies. 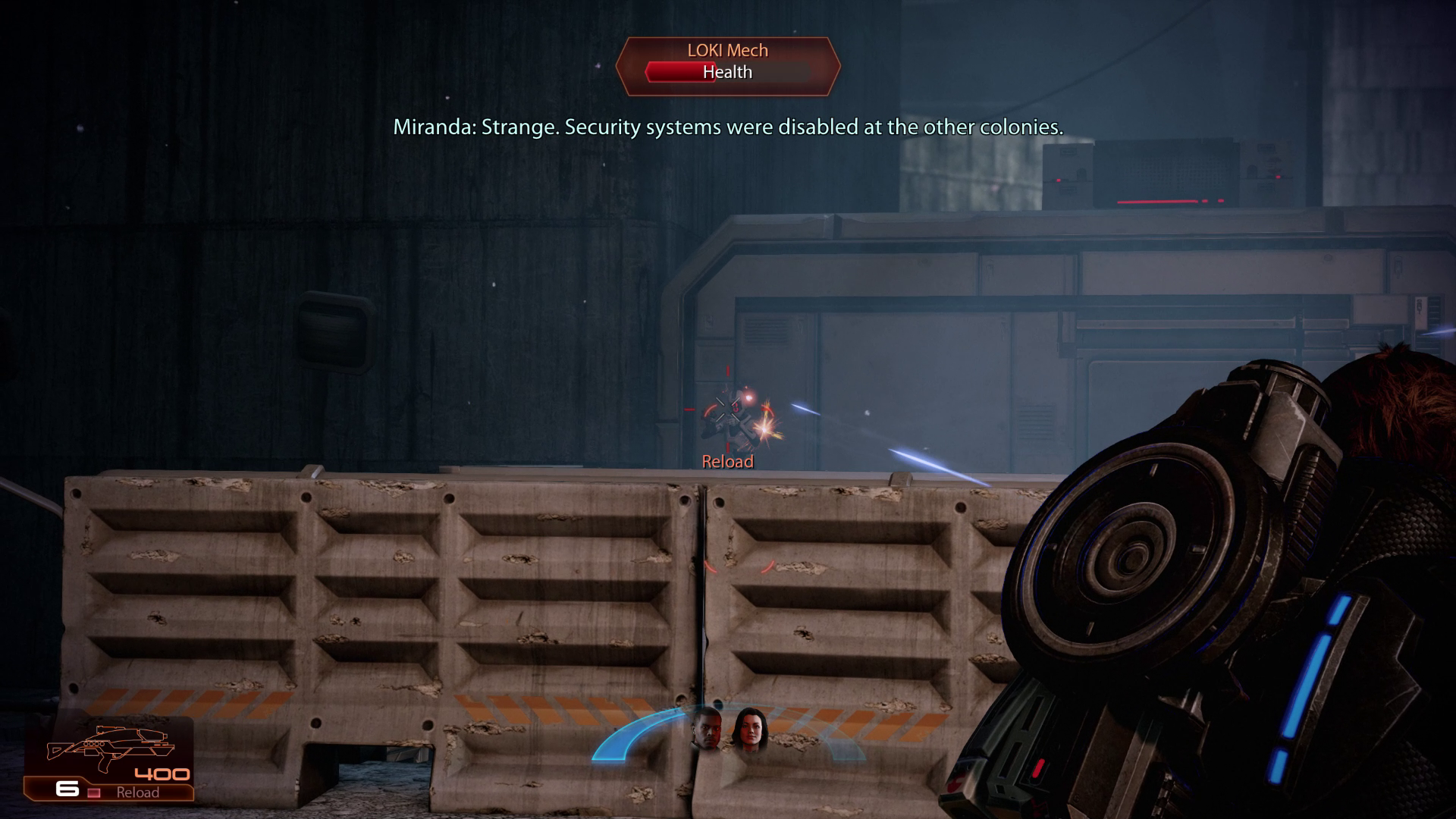 Note that Heavy Weapons can only be equipped by Shepard and not any of your Squadmates. Additionally, Weapon Talents and Ammo Mods are no longer available. Instead, these have been collectively upgraded to Ammo Powers, which determine the type of damage you’ll inflict with the Weapon you’re wielding.

You may use Incendiary Ammo to burn your enemy’s Armor down or Cryo Ammo to freeze and to shatter them. You’ll still be confined to using Weapons that you’re only proficient with and this is reflected in Character Creation or every time you go out of the Normandy to do quests. This means that when selecting your loadout, the only types available to you are the ones that you’re well-equipped to use. The default Weapons that all Classes are proficient with are the Heavy Pistols, Submachine Guns, and Heavy Weapons.

When it comes to enhancing Weapons, you no longer use mods and instead, you research the Weapon Upgrades you’ve collected from explorations. Note that these Upgrades apply to each of your Weapon Type, not individual Weapons as in Mass Effect 1. For example, if you’ve researched a Shotgun Upgrade, the bonuses will be applicable to all of your Shotguns.

In Mass Effect 3, the 6 Weapon Types from its predecessor remain as is. However, there’s a major departure in terms of how you wield Weapons because this time around, you can equip any type but you’ll have to be aware of one restriction. A new feature called the Weight Capacity has been introduced to identify if your character is going above their carry threshold or not. If you’re an Engineer or Adept, which have the lowest carry capacities of the Classes, and you decide to carry one Weapon per type, your Powers will recharge at a much slower rate as compared to bringing just one or two Weapons. On the other hand, if your total Weight Capacity is less than the threshold, your Powers will recharge faster. 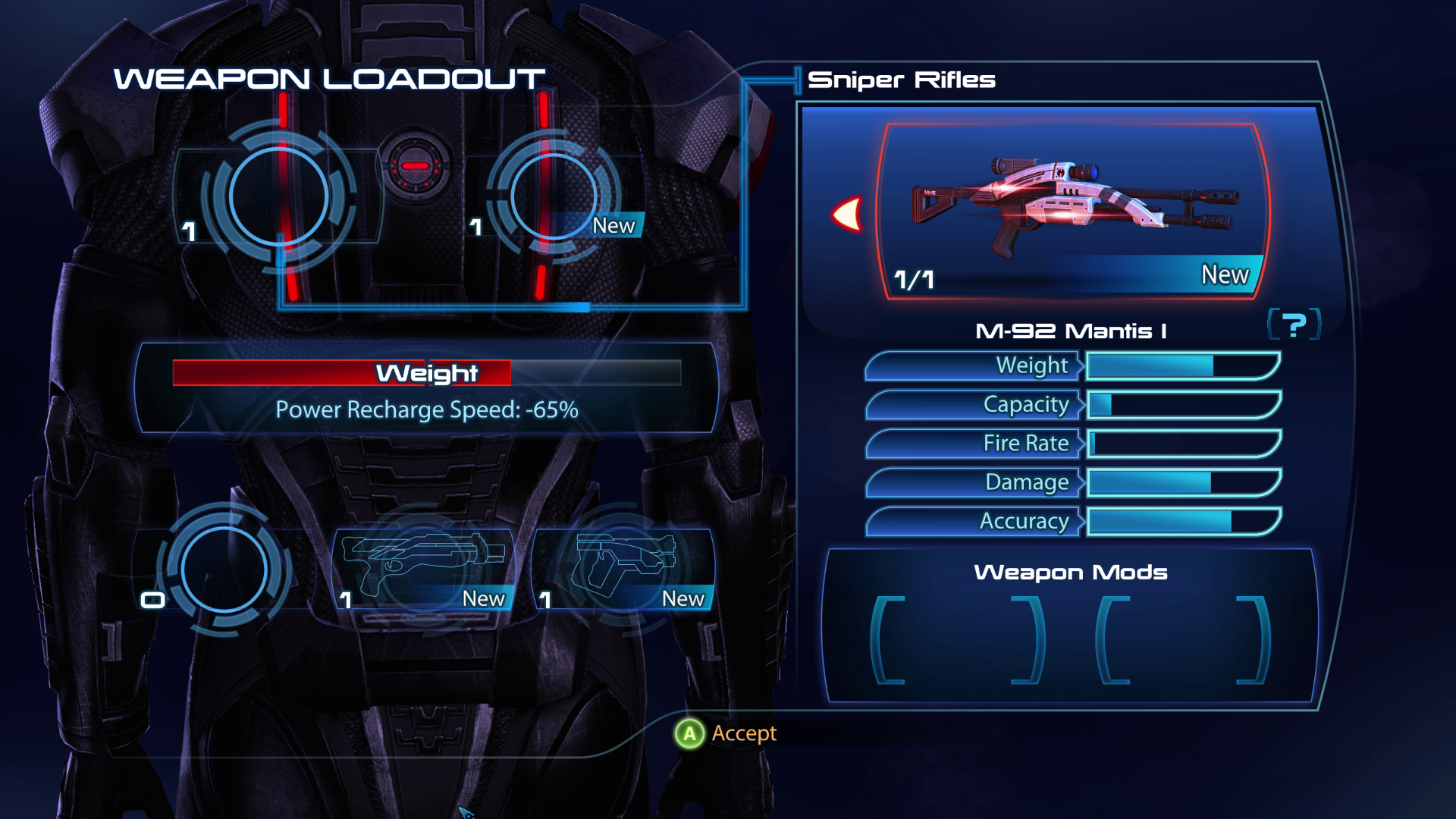 When it comes to enhancing Weapons, mods from Mass Effect 1 are back with a slight tweak to how it works. A Weapon Bench is required if you wish to add these to your Weapons. There are mods to increase your overall Weight Capacity so that your Powers’ recharge times won’t be heavily penalized.

In Mass Effect 1, Armor is known as Shields. There are 3 Armor Types that you can equip, which is dependent on the Class you choose. These are Light, Medium and Heavy Armor. Heavy Armor provides the best durability among the three. If you don’t have an Ability that lets you wear heavier Armor, then you can only equip the lower version. Armor protects you from Weapon, Tech and Biotic Damage. In terms of enhancements, upgrading this is similar to how it’s done for Weapons, meaning you’ll need Armor Mods to improve your overall damage protection. 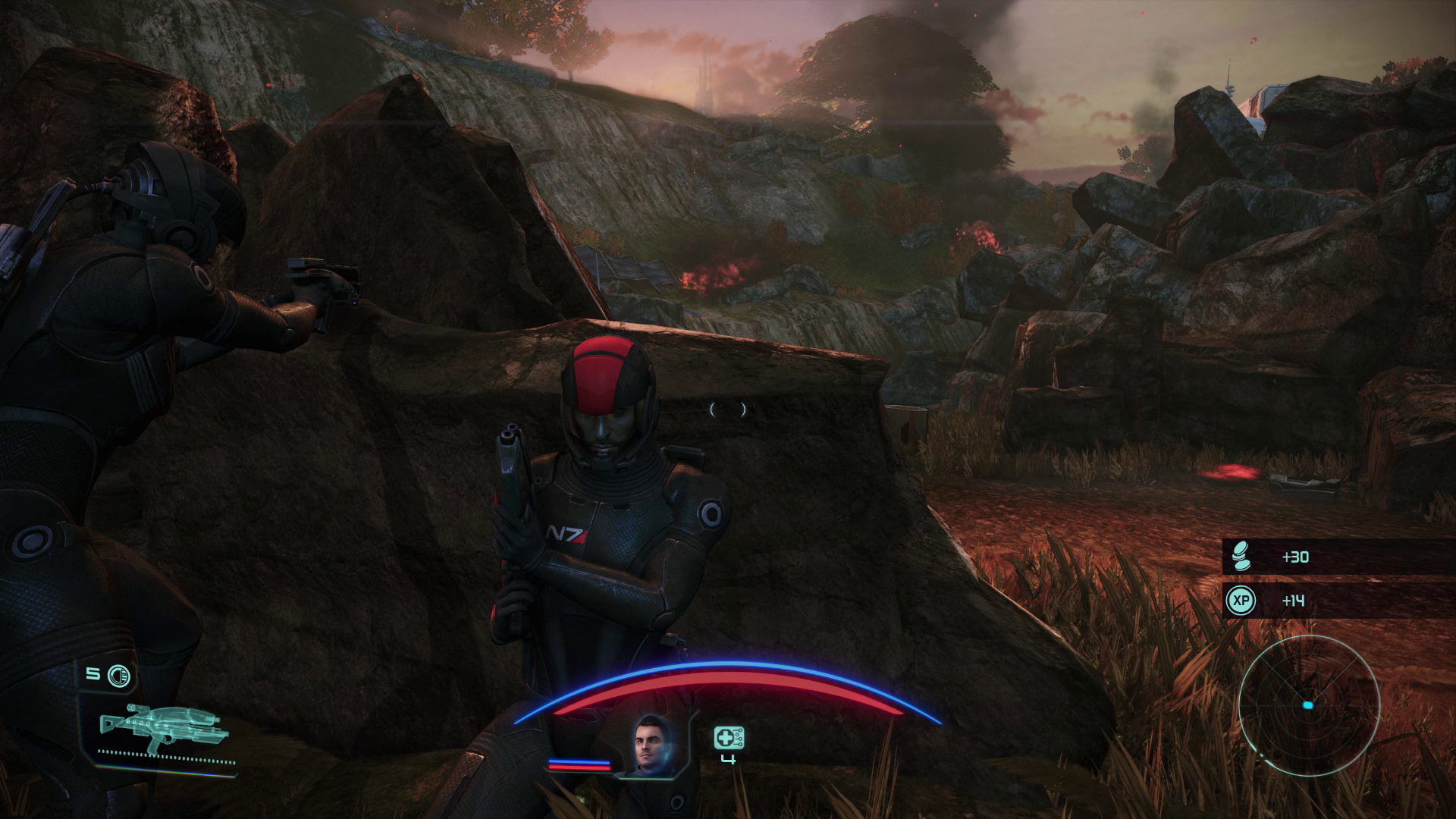 In Mass Effect 2, the Armor Types have been changed completely. Instead of basing it on weight as in the previous game, you now have Armor Sets and customized Armor. Armor Sets already have full bonuses to damage and durability whereas customized Armor lets you swap Shoulder, Arms and Leg Pieces, to name a few, in order to modify the bonuses you receive. 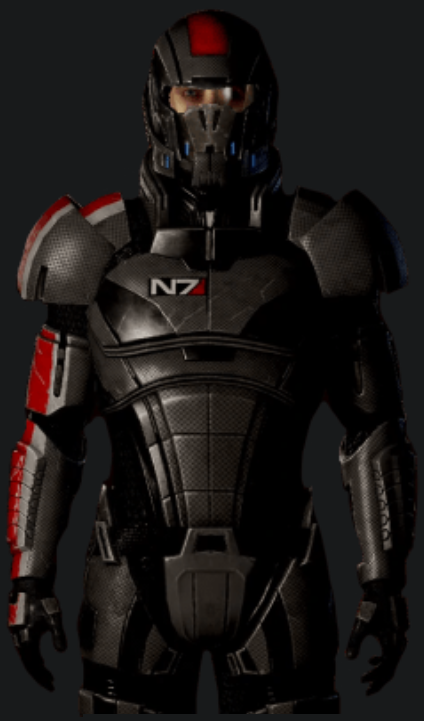 Moreover when you fight enemies, you’ll need to identify what Armor they’re wearing, which can either be Armor, Shields or Biotic Barriers. Each of these have their own Weapon and Power weaknesses that you can use to your advantage depending on the Skills your Squad has. Similar to Weapons, Armor Upgrades are done via research.

In Mass Effect 3, Armor Sets and customized Armor are still available for Shepard. In order to upgrade these, you’ll need to acquire better sets or swap pieces as needed. The Armor Types for enemies remain mostly the same, except for a new one. Armored Plating includes patches of Armor that you can find on some enemies. You can break this by dealing continuous damage on a specific area or by directly shooting the unprotected body parts of enemies.

Another feature is the Shield/Barrier Gates for enemies and the Health and Shield Gates for Shepard. These gates function similarly such that when Shields or Barriers have been destroyed, you or the enemy will either be immune or receive much less damage, respectively, depending on your current difficulty mode. This prevents both parties from plunging straight into their deaths once their protective layers have been destroyed, making combat a bit more challenging and exciting at the same time.