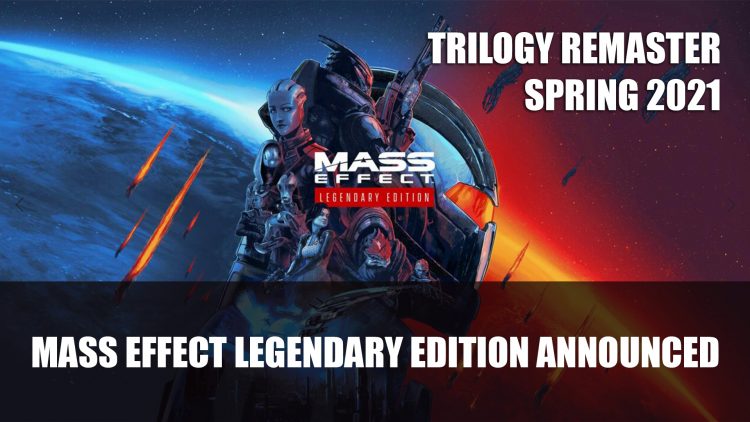 The Mass Effect trilogy remaster gets confirmed at the N7 Day event. Mass Effect Legendary Edition will release on both current and next-gen consoles in Spring 2021.

After many speculating that a Mass Effect trilogy remaster was underway, it finally gets confirmed at this weekend’s N7 Day event. Mass Effect Legendary Edition will be a remastered collection of the three games and will include new content. The collection will be coming to both Xbox One, PS4 and PC, as well as Xbox Series X and Playstation 5 with forward compatibility. Next-gen consoles will also gain enhancements, and the games will release Spring 2021.

The latest blog post by VP and general manager of Bioware Casey Hudson, confirms that the Mass Effect Legendary Edition will include both single-player base content and DLC from Mass Effect, Mass Effect 2, and Mass Effect 3. There will also be promo weapons, armors and packs, all being remastered and optimised for 4K Ultra HD.

Your choices. Your squad. Your Shepard. Relive the legend in a remastered edition of the highly acclaimed trilogy. Mass Effect Legendary Edition arrives Spring 2021.https://t.co/jLUj8FUGaI pic.twitter.com/vxTKyq4LQ1

The existence of this trilogy remaster was not exactly kept a secret as hints of the game were everywhere including an art book was announced back in July, called the The Art of the Mass Effect Trilogy: Expanded Edition, which is set to launch in February 2021.

Then there were place holders with box art on a Portuguese retailer Gaming Reply back in September, which featured the box art for PS4, Xbox One and Switch. However, these were shortly taken down, and the logo was based on the past trilogy for Xbox 360. But either way it’s great to see these rumour confirmed.

Mass Effect Legendary Edition will be releasing in Spring 2021 on PS4, Xbox One, PS5 and Xbox Series X.

For more news find it here in Godfall Could Be Coming To Xbox Series X In 2021 and Demon’s Souls New Character Creator Previewed.