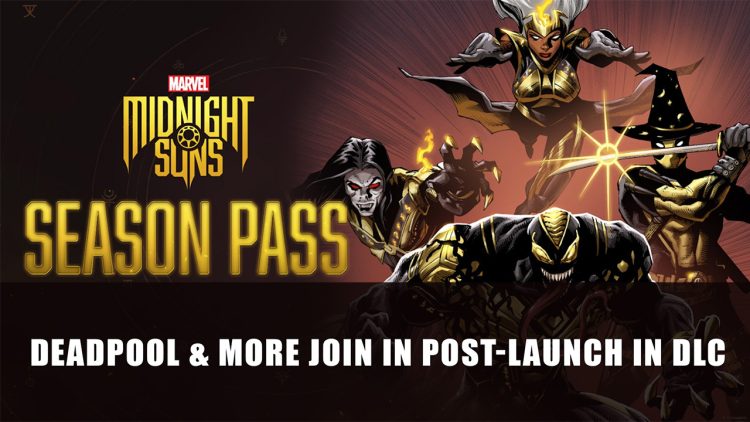 Firaxis have been teasing Deadpool will be coming to Marvel’s Midnight Suns, but now confirmed the anti-hero plus more will be heading to the game in a post-launch DLC.

Developer Firaxis has been teasing they will be adding further characters to upcoming tactical RPG Marvel’s Midnight Suns. Now the studio has confirmed Venom, Morbius and Storm will join the game in paid post-launch DLC. The first DLC will release in early 2023 according to the latest reveal trailer featuring the characters. The new trailer shows Deadpool delivering the good news, that himself and the three other heroes will be featured in the season pass.

Midnight Suns will be launching this December with twelve playable characters. The tactical RPG developed by XCOM studio Firaxis is based on the Marvel universe. Players will be able to use characters such as Spider-Man, Wolverine, Ghost Rider, Blade, Iron Man, the Scarlet Witch, Captain America, Magik and more with card-based attacks.

According to the official website, there are four post-launch DLCs planned for the game, and are included in the legendary edition as well available separately with the season pass. Downloadable content in the season pass will contain character skins, characters, new missions and more. The Season Pass will consist of four DLCs which are listed below:

A foulmouthed mercenary with a heart of gold, Deadpool has a penchant for grisly violence and lighthearted, fourth-wall breaking wisecracks.

Spider-Man’s nemesis and main game boss, Venom turns playable hero in DLC 2, armed with all of the same symbiote attacks that once threatened the lives of the Midnight Suns.

One of the original comic book Midnight Sons, Morbius is an accomplished biochemist who, in an attempt to cure his own rare blood disease, turned himself into a living vampire.

A powerful member of the X-Men, Storm has the mutant ability to generate and manipulate wind, lightning, rain, and other types of weather to her will.

In addition to these heroes and their respective new abilities, each of the four DLC packs included in the Season Pass will introduce new story missions, a new upgrade for the Abbey, and a selection of new skins and outfits.

Previously we had a trailer that delved into playable character The Hunter, a fully customisable hero players will get to create. Previous deep dives also covered Spiderman with the use of his quick abilities and spidey sense. As well as the Magik The Master Of Teleportation. If you want to know what we thought of the gameplay check out our hands-on impressions.