While at PAX East 2020, I had the pleasure of getting some time with the upcoming free-to-play MMO Action-RPG, Magic: Legends. In this hands-on article I’m going to go over some of my first impressions for classes, as well as combat and more.

At PAX East 2020 I got a chance to play Magic: Legends, an online action RPG which is based on the Magic: The Gathering universe, an iconic strategy card game. From my time with the demo it’s apparent Perfect World and Cryptic Studios are going with a Path of Exile/Diablo-type feel here, while featuring fast-paced combat inspired by Magic: The Gathering. 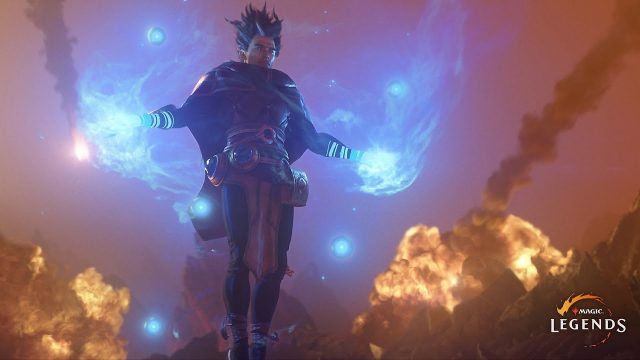 Earlier this year Cryptic Studios unveiled two classes Geomancer and Mind Mage. They also recently announced  Beastcaller class which was part of the demo. I started off by playing the first part of two different demos as a Geomancer and also got to spend some time playing Beastcaller.

From my time with the demo I got a quick preview of how the story is presented to players. It was nothing out of the ordinary, no cut scenes but the same top down view, but slightly zoomed in for dramatic effect. This is kind of similar to the way Path of Exile present narrative, but instead of an onslaught of scrolling text, Magic: Legends provides dialogue with a few character animations. As this is the pre-alpha this may change over time. Voice acting was pretty top notch and definitely did a good job of getting you immersed in the battle ahead. 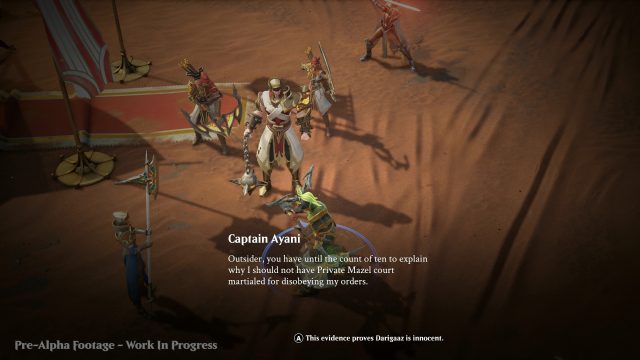 From my experience with the demo the build potential seems to be quite extensive for Magic: Legends, as you can strategically build a deck of 12 cards from your spell library. This includes various abilities such as summoning, magical attacks, and defensive or supportive effects. You will also be finding new cards on your journey, as well as collecting spell fragments/shards to make them more powerful. Spell Shards are obtained as loot where it can be given as a reward for completing certain quests, dropped by enemies or even bosses. Players can choose to mix up to two colors representative of MTG, with a max of 12 cards. This gives plenty of freedom to customize, catering to a person’s preferred playstyle, or to create various tactics and roles when you are playing with a team.

However, knowing that the 12 cards will be drawn at random, as you fight was at times both equally fun and frustrating, especially if you’re waiting to use the heal spell for your party while fighting. While sticking to similar concepts of MTG is understandable, I am curious to see how players will react when setting up a particular build, only to use their new abilities in a completely randomized order. Throw that in with making Magic: Legends out to be an MMO, and one wonders how well this will fit into the MTG universe, especially with the amount of Planeswalkers that there are out there. It also posed the question of how many will be accessible and if they will see their favorite ones in this game.

The Geomancer specializes in fire and stone attacks, especially in close-quarter combat. I enjoyed pummelling enemies to the ground with a fierce, ground attack that sent enemies flying. The goal was to cleanse all the evil statues by going from one glowing spot to another, destroying all enemies that come your way. 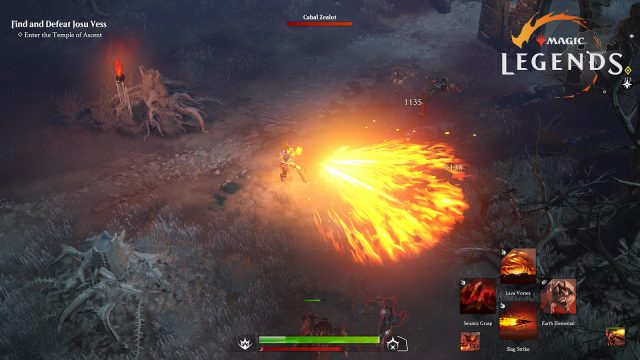 Speaking of pummelling enemies, I enjoyed summoning a Flametongue Kavu, which can deal massive amounts of melee damage and shoots out a jet stream of fire, much like a flamethrower which was pretty impressive. I equally enjoyed summoning a Titan made out of rocks (Earth Elemental) that assisted me in battle.

What’s interesting to note in combat here is that rather than waiting for the same spells to regenerate, you are flipping through cards akin to Magic: The Gathering. Even the names, stats and buffs are incredibly similar to the physical cards, which should be very encouraging to fans of MTG. These abilities/spells are assigned to A, B, X and Y buttons on the Xbox controller, making it pretty easy to unleash some powerful attacks.

For the second part of the demo, I played as the Beastcaller, who deals crushing blows from a massive spirit axe. As the name suggests, this class will call upon beast-like creatures. One of those friendly creatures is the Aether Fox companion, who will coordinate different attacks with the Beastcaller when summoned. 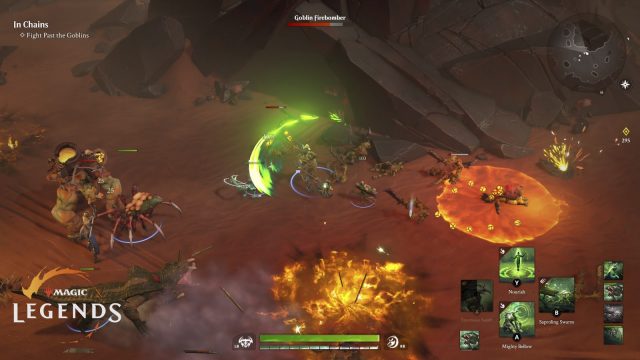 If you didn’t know, I’m a huge fan of melee combat, and this class is no exception to that rule. With your axe you can hurl it at foes, which will slightly restore your HP when damage is dealt. Summoning beasts plays an incredibly important  part of this role in combat, especially when preparing yourself for the dragon boss at the end of the demo.

There’s an ability where you can use your spell cards at a very rapid rate. Once you use this, you’ll basically want to spam all you spell cards, summoning massive beasts and even archers that will hail down a massive amount of arrows upon your enemies. I purposely saved this for the boss battle, a behemoth size deadly dragon. But it was no match for The Beastcaller, so long as you know how to use your spells and abilities to your advantage, as this is key in MTG.

UI layout was simple but effective, health bar is located in the middle lower portion of the screen with a magic or mana bar underneath that. Abilities  as I mentioned before, are laid out in a controller formation making everything very straight forward. Again this is still early days for Magic and it could go through a number of iterations which is similar to what is happening currently with Diablo 4, but so far looks pretty clean. 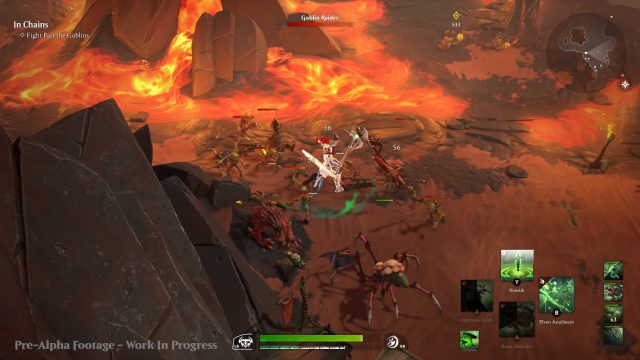 Let’s not forget the mighty creatures that you’ll be battling throughout Magic: Legends. These range from skittering giant, oversized bugs to warriors. I only got to experience this area, but I’m already looking forward to seeing more variations as these were pretty fun to fight.

The boss dragon was a little rough around the edges at this point, but emits a far ranging flame attack which is pretty intimidating. It causes the ground beneath you to become dangerous to stand on and limits the areas you can safely position yourself on. This made for a fun fight, as you need to be wary of the environment, as it turns into a battle of the ‘floor is lava’, while also dealing with a dragon at hand. 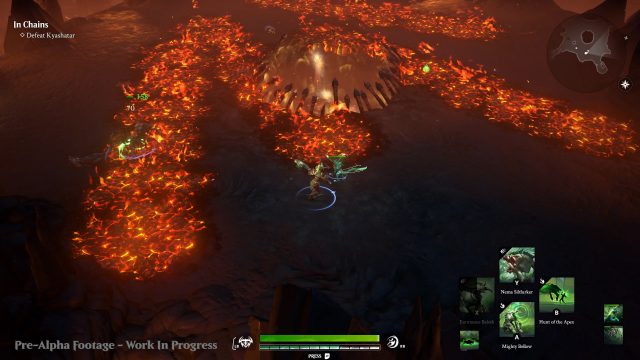 Currently visuals are pretty well detailed, smooth movement when it comes to combat and ability effects. This was specially showcased with the Beastcaller’s ability to rain down arrows, as it just looked pretty cool. Even the environments have detail and life. There’s also the transition of day to night, which makes places like the lava covered desert, looks just that bit more perilous. I can only imagine how this will improve with the continuation of development. 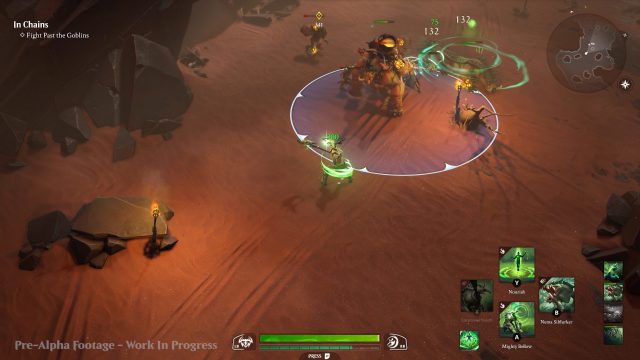 Battle music is quite awesome, definitely gets you hyped up to take out some enemies. The beasts you summon with the Beastcaller gives a satisfying roar, making you feel like your enemies might cower in their presence.

My take away after playing the demo is that Magic: Legends will encompass what Magic fans love about the card game, but offer a whole brand new experience to classes they’re familiar with, in a fast paced setting. But even if you haven’t stepped in the realm of Magic The Gathering before, Legends has plenty to offer newcomers. If you enjoy close ranged combat you’ll probably want to check out the Beastcaller. If elemental damage is more up your alley, the Geomancer will be a great match. 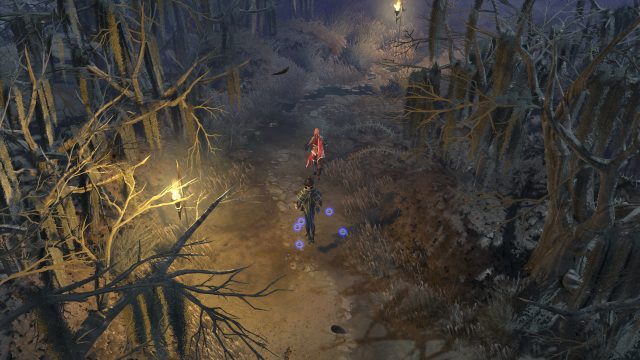 Calling it an ARPG with a Diablo 3-like feel to it is just fine to say, but again, the main concern here is attempting to compare MMO’s of old to Magic: Legends, which may not be quite fair to do so. You won’t be raiding with 40 players or taking part in large pvp battles. You’ll be playing with 2 other players. They are looking to make the game more modern in terms of gameplay, giving you loadouts and unique card decks to choose how you want to play the game. The character progression will be vast and deep, which will certainly make it interesting when playing with others. The jury is still out and there is still much more to learn.

All in all, we look forward to getting hands-on with the beta that hopefully launches soon. Don’t forget to sign up here and get ready to play with 3 other players. Be sure to check out our Magic: Legends Wiki and prepare yourselves for some MMO ARPG fun.