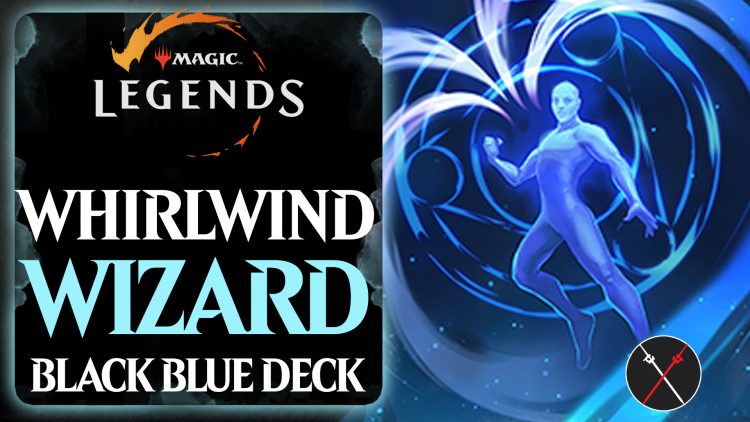 In this Magic Legends Build Guide I’m going to show you my Whirlwind Wizard Deck, which is a deck full of Black and Blue Sorceries that deal massive AoE Damage. I’ll show you which Spells to get, which Artifacts to slot, and what Equipment to use to make this Build work. If you’ve been looking for a strong Dimir Assassin Deck with lots of AoE, then you’ll want to check this one out. Check out all our Magic Legends Builds here.

The focal point of the Whirlwind Wizard Deck is the Greater Artifact Suffocating Curiosity. This Artifact provides you with Greater Swiftness and does damage to enemies if you make contact with them every second, even allowing you to pass through them, which is great. The kicker is that this damage is multiplied by two times the number of Black Mana Spells in your Deck, essentially forcing you into using a Black/Blue Deck if you want to reach the full potential of the Artifact. 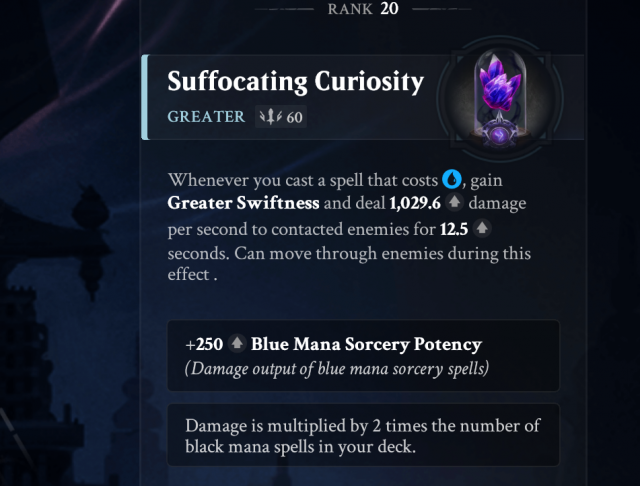 Additionally, you literally have to be standing on top of enemies to get the damage, which means that you need to practically forgo your Primary Ability or you’ll be out of range, except in the case of melee Classes like Geomancer and Beastcaller. This is why we use Geomancer, in order to get up close and personal quickly, and to deal damage with our Primary Ability while still dealing damage with Suffocating Curiosity.

Essentially, how this Build plays is that you’ll drop your AoEs and then leap into battle, staying directly on top of your target until it’s dead before moving to the next. It shouldn’t take long because the damage is not only multiplied by 2x your Black Mana Cards, but also your Damage Bonus from your Loadout Score. This means you can hit numbers of 120k damage per second at a Loadout Score of 1000, which is a lot of damage over time. And when you add all your other damage over time, it all adds up to a lot of death.

Geomancer is the preferred Class for this Build because it attacks in melee range, allowing you to still deal damage with Suffocating Curiosity while using your Primary Ability. It also can leap into combat, and then cast an AoE with its Secondary Ability, which synergizes nicely. On top of that, it has a larger Health pool, helping to keep you alive while you are at point blank range.

However, if you don’t have Geomancer you can play this with any Build since you don’t need to attack with your Primary Ability much, it will just be less optimized. I suggest Necromancer as a good alternative because its AoE Necromantic Aura synergizes nicely, as you’ll have both it and Suffocating Curiosity going at the same time for massive damage. Necromantic Aura also heals you, which helps keep you alive.

The Spells I’ve chosen for this Deck are all there for specific purposes, but most of these Spells are AoEs to help wipe out large groups of enemies quickly. Creatures are not overly helpful to this Build, but you can include one or two if you wish like Alchemic Thaumaturge, which reduces your Sorcery cost by 25%.

Alchemic Thaumaturge – This Creature is the only Creature in this deck and that’s only because it reduces the cost of Sorceries by 25%, and because it’s a Blue Spell which triggers Suffocating Curiosity. It’s not a must have card, but it does help get Spells out more quickly.

Concentrate – This Spell helps with Card Draw in order to help keep your hand full. It’s not the only way we gain cards more quickly with this Deck, but it does help tremendously. As you level it up it will get more and more likely to give you a 4th card.

Frost Armor – This Spell is great at keeping you alive by providing you some Shield, and it also Stuns enemies that attack you. If your damage Shield is not exhausted, when the Spell ends it also does AoE damage, which is an added bonus.

Icicle – A great projectile Spell that Stuns enemies as well. Having Spells of all shapes and sizes allows you to cast the right Spell for the situations, and sometimes that’s that enemies are all lined up.

Tidal Wave – A huge AoE Spell that hits in a line in front of you, it might just have the largest area of effect in all of Magic Legends, besides Heavenly Assault. Use this one when there are tons of enemies on the screen for best results.

Tornado – A very strong Spell with another huge area of effect that moves forward, pushing enemies along with it. Great for getting you out of dangerous situations, but you’ll most likely use it when you just want to destroy a ton of enemies.

Phantasmagoria – A very powerful damage over time AoE, that also reduces the damage enemies deal inside of it. Drop this on Bosses before you leap in so that you take less damage while fighting them inside of it.

Wailing Souls – This Spell damages enemies in a narrowish line and snares them, while dealing damage over time. Damage over time effects work particularly well with this Build because of the Legendary Artifact Implement of Combustion, though this Spell does not trigger its effect.

Infest – A conal AoE that deals damage initially and then damage over time while setting Lesser Vulnerability on enemies, increasing the damage they take. This Spell is just win/win and might be one of the best in the whole Deck.

Leech Outbreak – This Spell deals damage over time to many enemies at once, helping with card draw. However, it also heals you for quite a bit of Health, making it rather valuable as you have no other way to heal besides Health Orbs.

Desecrate – This Spell deals tons of damage in an AoE over time, but also deals some up front damage if you have a Creature out you can sacrifice. Sometimes this will be Alchemic Thaumaturge, and others it might be some token Creatures from your Equipment.

Abyssal Flame – A devastating AoE that is great for finishing off tough to kill enemies, like Captains and Elites. Save it for below 50% Health, so that it does even more damage.

Implement of Combustion – This Artifact works well for this Build because it adds extra damage over time to your Spells and provides even more Card Draw when enemies die while they are receiving damage from this Artifact. It would be nearly impossible to keep up Spell Storm without this Artifact, making another case to use it. It provides Spark Recharge, meaning you’ll get to use Mana Surge more often, and you can use this Artifact in any Color of Deck effectively.

Suffocating Curiosity – This Artifact is the focal point for the entire Build, and is the reason we chose Black as our second color. The more Black Cards in your Deck, the more damage the AoE will do. But, have too many and you can’t keep up the damage and Movement buff consistently. It’s a fine balance, which is why we only have 4 Black Cards in the Deck. You can increase this number to about 6 or so, but you don’t want more than that ideally. It also provides Blue Mana Sorcery Potency, which helps with Blue Spell damage.

Cursed Idol – This Artifact might be one of the best in Magic Legends, because it afflicts nearby enemies with Greater Vulnerability when you cast a Sorcery. Many players run this in their Deck, even though the second bonus is Black Mana Sorcery Potency. However, that helps us here, since we have 4 Black Sorceries.

Eye of Lost Dreams – This Artifact gives both Black and Blue Mana Sorcery Potency, as well as Blue Mana Creature Potency, making it perfect for this Build. We don’t really use Blue Creatures, but you could add more if you wanted and be fine.

Seer’s Crystal – This Artifact provides Black Mana Creature Potency and Blue Mana Sorcery Potency, making it nearly perfect for this Build. You don’t really use Creatures in this Deck, but if you wanted to add some you could.

In this section I’ll cover the Equipment I use for this Build including Accessories. You can use variations of these or other Equipment if you wish, as generally you’ll just use the best of what you have here. But let me show you what I use.

Wild Seer’s Cowl – This head piece gives you increased Control Rating by +500 when you kill an enemy with your Secondary Ability. It also gives you Hexproof for 5 seconds when you use your Utility, preventing enemies from targeting you during this time.

Attire of the Dark Wanderer – This chest piece provides you with increased Mana regeneration when you cast a Spell at full Mana. It’s not the best piece so feel free to swap this out for whatever else you want. However, you’ll have lots of Card Draw so you’ll need Mana to cast Spells fast.

Spellbinder’s Wrappings – This Hands piece increases both Utility and Secondary recharge Speeds so you can use them more often, as well as provides more Health. You want to be able to use these Abilities often, so this is nice to have.

Boots of the Pioneer – These Boots provide 25% Reflect if you drop below 8 Mana, which will be constantly. You can use other Boots, but these will help in those situations where you might be a little outgunned.

Ring of Valor – This Ring provides Health regeneration, as well as more damage with both Primary and Secondary Abilities. You will use these often, so this is really good to have.

Slagwurm Pendant – This Pendant gives you Greater Might when you use Mana Surge, which will be constantly, as well as giving you 5% Reflect when you kill an Elite with your Primary. Additionally, it comes with Max Health Potency, which will help keep you alive while in melee range.

You can pop Blue Spells out of combat in order to gain the Greater Swiftness buff, helping you to get to events faster (like Skirmishes) before they end. Concentrate is the ideal spell to use for this, but don’t be afraid to “burn” a Spell to get where you’re going quicker and get loot.

Make sure that you are standing directly on top of enemies you are fighting when possible because the AoE range for Suffocating Curiosity is REALLY REALLY small. It also only ticks every 1 second, so you have to stay on top of said enemy while they are moving or you won’t do much. Get in the habit of doing this for best results.

Make sure to cast a Blue Spell, then use your Utility to jump into combat, pop your Secondary Ability for a strong AoE and then start casting Spells and going to town with your Primary as needed. This is generally how your combo will go, alternating between Spells and Primary/Secondary attacks as necessary.

Lastly, you will not have all these Spells or Artifacts right away, and it’s fine to replace most of them in the meantime as long as you have Suffocating Curiosity. This Artifact is crucial to this Build, and you need to get it to Level 20 ASAP, so that should be your first priority with this Build. It’s even more important than Implement of Combustion!

Stay tuned for more Magic Legends Builds, and be sure to check out the Wiki if you have questions about the game. There you can find a full Spell list, as well as what Artifacts and Equipment are available.