In this Magic Legends Build Guide I’m going to show you my Demonic Horde Deck, which is a deck full of Black Creatures that can completely dominate and take over a screen. I’ll show you which Spells to get, which Artifacts to slot, and what Equipment to use to make this Build work. If you’ve been looking for a solid Necromancer Deck with lots of big Creatures, then you’ll want to check this one out. Check out all our Magic Legends Builds here.

The Demonic Horde Deck takes full advantage of the Legendary Artifact Bloodsoaked Altar. This Artifact makes it so that when you Sacrifice a Creature you lose 15% HP and discard a Spell. If you do you gain a 5/5 black Demon Creature with Trample. 5/5 is pretty beefy for a Creature, and Trample makes it so their attacks can hit multiple enemies.

The Necromancer Class’s Secondary Ability summons 3 Skeletons once you’re level 10, and using its Utility Ability will Sacrifice these Creatures instantly triggering this effect. This allows you to summon 3 of these Creatures at once, every 10-15 seconds, but there are two issues with this Artifact that you must solve in order to make this Build work. 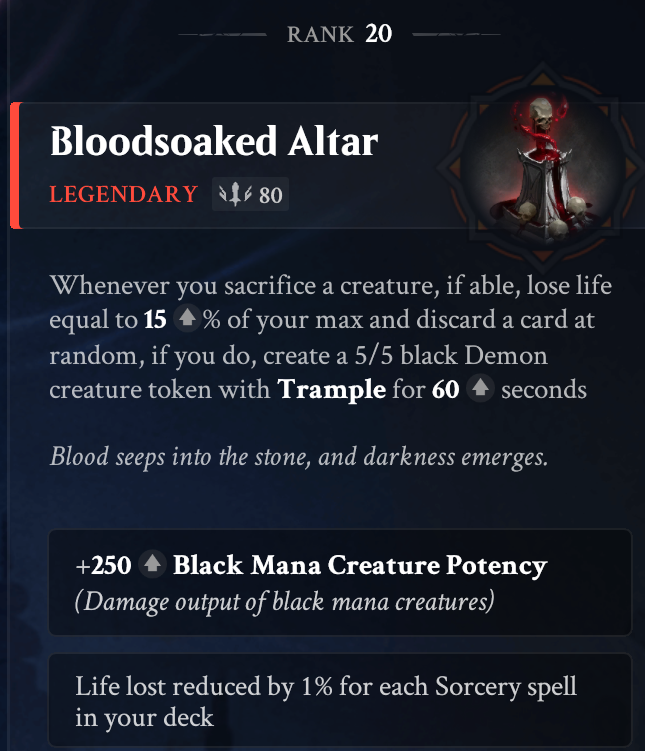 First, you lose 15% of your Max Health per Creature, which means this is 45% of your Health each time you use it. You have to be careful or you can easily kill yourself, so you need a way to regain life in order to keep using this without dying.

And Second, you only get a Creature for each Spell you discard. This means if you only have 2 Spells in your hand you will only gain 2 Creatures and lose 30% Health. Figuring out how to spend your Spells and when to discard them is a huge part of this Build.

Luckily we have answers to both of these problems.

As I mentioned you need to be a Necromancer in order to play this Build because you need Grave Upheaval and Necromantic Aura in order to get many of these Creatures out quickly. You can get up to about 12 of them at out if you play things right, but you’ll average somewhere around 6 with this Build. Regardless, make sure Necromancer is your active Class. 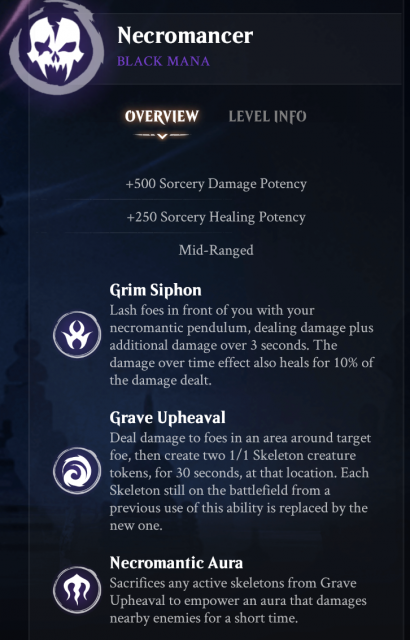 The Spells I’ve chosen for this Deck are all there for specific purposes, but most of these Spells are Creatures, and that’s because once summoned Creature Spells don’t have much value, so discarding them is less detrimental to your playstyle. Additionally, we pump Black Mana Creature Potency in order to get the most of the Demon Creatures, and this will benefit other Creatures as well. However, there are some Sorceries and an Enchantment in this Deck.

Darksworn Cleric (1 point) – Darksworn Cleric is a cheap Creature with Lifelink, allowing it to heal you when it attacks, which you will need to keep your Health up. It also creates a hazard on the ground that deals damage over time, which can help heal you for even more.

Cabal Knight (2 points) – Cabal Knight is a tanky melee unit that also has Lifelink, helping to keep your Health topped up. He also spins in a circle sometimes, hitting all enemies around which heals you for each enemy hit.

Rotting Fentusker (2 points) – Rotting Fentusker works well with this Build because it gets +1/+1 for 10 seconds whenever a Creature you control dies, which again will be often. It also Sacrifices a Creature when entering play, allowing you to gain another Demon Creature.

Corpsefiend (3 points) – Corpsefiend has great synergy here because it gains +1/+1 each time a Creature you control dies, which will be often since you’ll be sacrificing 3 at a time every 10-15 seconds. It also puts hazardous AoEs on the ground if it hits +5/+5 from the amount of Creatures you have lost, further boosting damage.

Abyssal Fiend (3 points) – Abyssal Fiend Sacrifices your most powerful  Creature to gain the Power and Toughness of said Creature for 10 seconds, and it does this every 10 seconds. This will keep generating Demon Creatures, while pumping up this Creature.

Desecrate – Descerate is amazing for this Build and deals a ton of damage in a large AoE. And since it Sacrifices a Creature when you cast it, you will gain a 5/5 Demon Creature with Trample. This means there is very little downside to it being in your deck.

Leech Outbreak – Leech Outbreak deals solid damage, but what’s more important is that it heals you for a ton of Health. You won’t need it all the time, so when you don’t just discard it and make a Demon Creature.

Annihilation – Annihilation Sacrifices ALL your Creatures to deal massive damage to Creatures around you. You usually have about 12-15 Creatures out with this Deck, so this can be a significant amount of damage. However, it will set you back all your Creatures, so only use it when you absolutely have to. The rest of the time, you should just discard it and make a Demon Creature.

Vicious Hunter – Vicious Hunger isn’t needed often, so you will discard it more than you’ll use it. However, it can heal you in a pinch, which is what we keep it for. Use it when you’re desperate for some healing, and not before.

Mutation – Mutation allows you to buff your Creatures by +2 Power but they lose -1 to their Health stat. You can never have enough damage with your Creatures, and they will already be fairly beefy so this is a fair exchange. The Enchantment lasts 30 seconds, but will increase in duration as you increase the Spell rank.

Bloodsoaked Altar – Bloodsoaked Altar defines the whole Build, and I’ve already explained how it works. It also provides Black Mana Creature Potency, which helps to improve Black Creature Damage, which is an added bonus. You want to upgrade this to Level 20 as soon as you can in order to take 30% of your Health when you use your Secondary/Utility combo instead of 45%.

Demonic Contract – Demonic Contract provides you with some healing whenever you Sacrifice a Creature, which helps to offset some of the damage you will take from Bloodsoaked Altar. It also grants Greater Might to one Creature when doing so, which increases its damage.

Cursed Idol – Cursed Idol increases the effectiveness of your Black Sorcery Spells, and also places Greater Vulnerability on nearby enemies when you cast a Sorcery. This makes them easier to kill and helps your Creatures take them down faster.

Carving of Oloro – Carving of Oloro provides some Black Mana Creature Health, helping to keep your Black Creatures alive. It also increases the healing of Leech Outbreak and Vicious Hunger, which is nice.

In this section I’ll cover the Equipment I use for this Build including Accessories. You can use variations of these or other Equipment if you wish, as generally you’ll just use the best of what you have here. But let me show you what I use.

Boots of Blight – Boots of Blight provide Greater Haste to your Creatures whenever you use your Utility Ability, which helps to increase their attack speed. Between these Boots and Tactician’s Headdress you should keep this up near constantly.

Make sure to use your Secondary Ability before casting Desecrate or Rotting Fentusker as this way you won’t consume one of your other Creatures on accident. Get in the habit of using this before casting either of these two Spells, and then immediately popping your Utility Ability afterwards.

You can hit the “T” button on your keyboard to make your Creatures attack a specific target. This can help tremendously, though I have found the AI of the Demon Creatures to be better than most. They also have a ranged attack, so they can damage enemies without moving which makes a big difference. Still, if you are having trouble getting them to attack what you want, just hit the “T” key while hovering over the target. 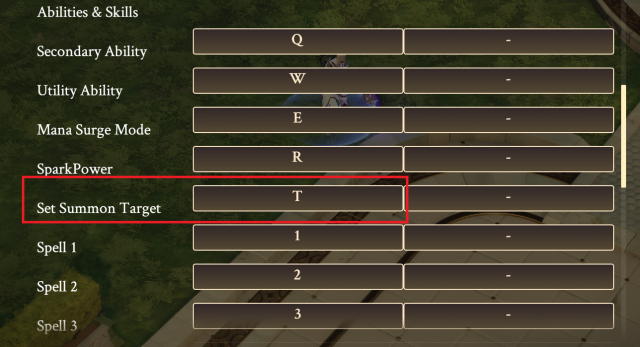 Try to avoid using your Secondary/Utility combo outside of combat, because it will hurt your Health with no way to regain it, and it will begin the timer on the Demon Creatures you summon. You want them to last as long as they can in combat, so make sure you summon them when you need them.

Lastly, you can combine other colors with this Deck as well, and it doesn’t need to be played as a Mono Black Deck. However, keep in mind that a big part of this playstyle is discarding cards in order to gain Demons. If you add a bunch of Spells to this deck that synergize well, and you find that you want to cast them all, you will quickly run out of Demons. Finding the balance between a small number of Spells you can play, a decent amount of Creatures you don’t need to recast, and discarding cards is tricky. Play around with other colors and see if you like them.

Stay tuned for more Magic Legends Builds, and be sure to check out the Wiki if you have questions about the game. There you can find a full Spell list, as well as what Artifacts and Equipment are available.