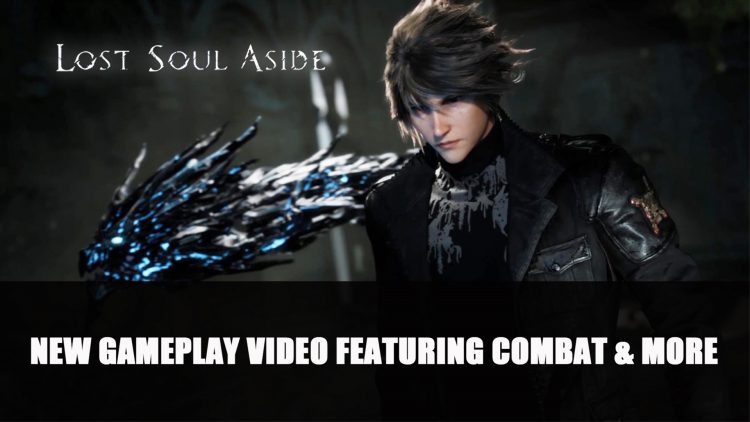 Ultrizero Games have released a new gameplay video for its upcoming Action-RPG Lost Soul Aside.

In their latest video, developer Ultizero Games showcases the Action-RPG Lost Soul Aside‘s combat. The video is 18 minutes long, previewing a boss battle with flying gargoyle which shoots laser beams. It looks to combine futuristic themes with a ruin backdrop.

The main character can be seen zipping around the boss battle area, and even floating off the ground to avoid one of the boss’ phases with rotating laser beams of death. After defeating the boss, we get a peek at a cutscene. The story remains rather mysterious, but guessing from the title, the main character could be conversing with an inner demon, another soul. His companion is a crystal dragon that morphs into his sword-like weapon, and might be who is talking to at the end of the footage.

The video description mentions this is early gameplay footage and is still under development, but it does give up a better look at the direction of the combat style and even the narrative. It looks a cross between the Devil May Cry series with some Final Fantasy. Hopefully the story is just as intriguing as this short snippet shown.

Yang Bing’s Lost Soul Aside gained interest when he released his first trailer which started out as a solo project. The game is influenced by such titles and Ninja Gaiden and Final Fantasy XV. The title was brought under the China Hero Project which helped to expand his team under Ultizero Games.

Sorry to keep you waiting.

We have returned with the latest update on Lost Soul Aside. Check out 18+ minutes of new gameplay that the development has prepared for everyone to see. We apologise for the long wait & thank everyone for the continued patience. https://t.co/11dlOam4Sj pic.twitter.com/kHQ39QjHcC

Lost Soul Aside will also be present at the upcoming Playstation event in China, teasing on its Chinese social media platform Weibo account it will be sharing something on April 29th. While the game has been previously announced for PS4, it could mean they will developing a PS5 version as the event will outlining upcoming games and more info for PS5 for that region.

Lost Soul Aside will likely appear at the PlayStation China Press Conference 2021 on April 29.

Lost Soul Aside has yet to have a release window, but was previously announced it would be coming to PS4.

For more news be sure to check out next Xuan-Yuan Sword VII Comes West This Summer On PS4 And Xbox One and Godfall Gets Rating For PS4 In Europe.