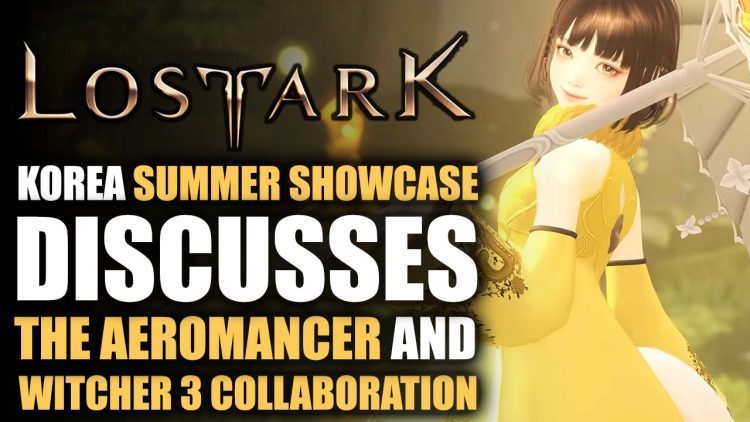 Lost Ark recently held its LOA on Summer event in Korea that discussed the Aeromancer Class, a Witcher 3 Collaboration, and More!

The Korean version of Lost Ark has a lot of things to look forward to, thanks to the recent online showcase, LOA on Summer 2022. Smilegate took to live streaming channels such as Youtube to show off a lot of new updates coming to the game in the coming summer months. The entire conference, which had a live panel present, lasted over 2 and a half hours.

Let’s take a look at things that all Lost Ark fans, whether in Korea or in the NA and EU, can all be excited for!

The Aeromancer was already previously confirmed. It is the second advanced class of the Specialist, the first being the Artist, and one of the classes still missing from the Western release. Back in the original announcement, we only knew that the Aeromancer would be the master of Wind and Rain. 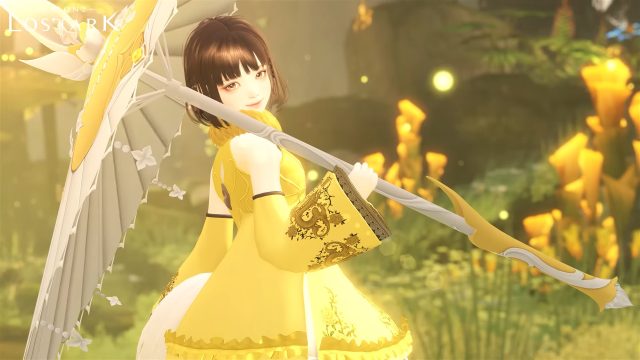 Now, we finally get some solid gameplay footage that features this pint-sized Specialist. Don’t let her small size fool you as she has definitely secured her spot as a master manipulator of the weather. Wielding a simple umbrella, the Aeromancer is not afraid to get up close and personal with her foes despite being a magic-user. 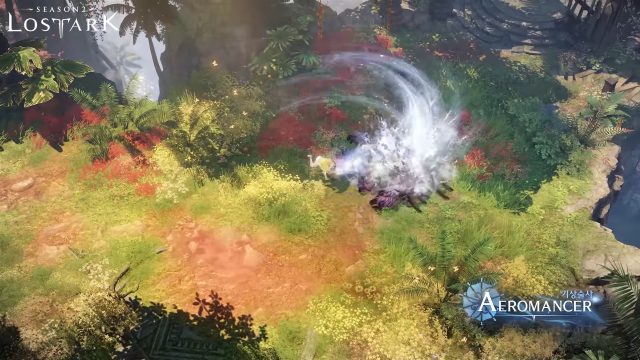 Whack them with the Umbrella!

Aeromancers can perform various spin attacks, drill attacks as well as magnetized abilities with the umbrella. She can create mini-tornadoes that constantly barrage foes with gale wind. She can create rain in a singular spot, perhaps slowing down enemies or otherwise making them susceptible to more damage. We can also see her creating powerful sun strikes that target certain areas and bombard them with massive heat damage. 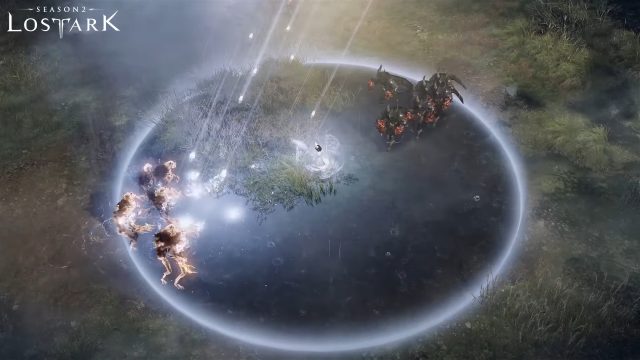 And of course, she can whack enemies on the head with the umbrella. This definitely looks like the perfect mage/assassin hybrid DPS class. The Aeromancer will release for Lost Ark Korea sometime in July 2022.

Lost Ark Collaboration With The Witcher 3

Next up is the confirmation that Lost Ark will have some sort of super-secret collaborative event with their friends up in Poland, CDProjekt Red. The partnership was actually mentioned somewhat in passing and gave fans literally no information except the announcement itself. What could this possibly mean for fans of Lost Ark and The Witcher? 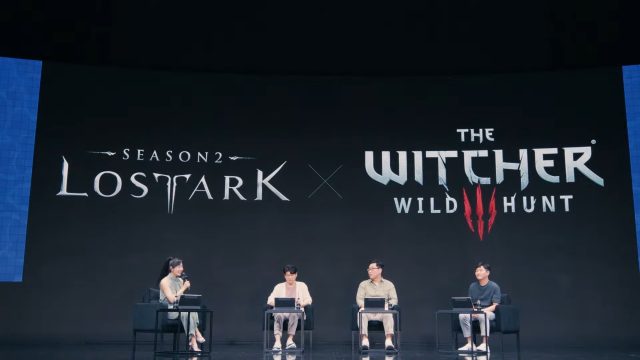 We do know that The Witcher has had collaborations in the past, one of the most famous being their tie-in events with Monster Hunter World. CDProjekt worked with Capcom to bring things such as Contracts, Geralt’s Armor, Ciri’s Armor, legendary weapons such as Zirael, and even gigantic monsters like the Leshen and Ancient Leshen to take down. 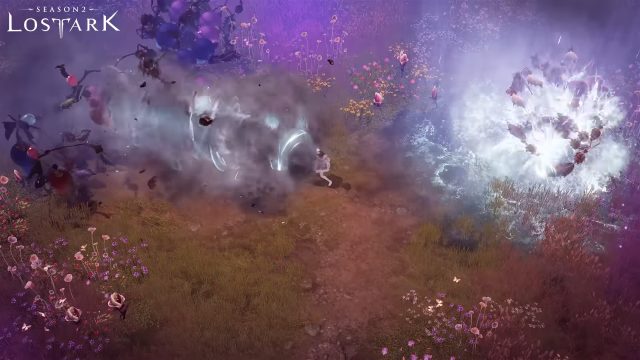 Control the Winds and the Rains

Perhaps the new Lost Ark content could have new Guardian Raids that incorporate the Ancient Leshen? Though that monster, in particular, is quite small. Good thing that The Witcher has quite the menagerie to choose from in terms of terrifying creatures and monsters. The most likely candidates for Guardian Raids would be large Relicts, such as the Chort or the Fiend.

Even further, hopefully, we can get some skins that are themed against some existing armor, such as the Griffin, Ursine, or Feline Witcher Gear sets. Maybe we can even get to meet Ciri herself, as she is quite known to be able to jump between multiple realms.

Arguably the most exciting and biggest content drop will be the introduction of the fifth Legion Commander Raid. This will be Iliakan (or Akkan in the NA/EU release). Akkan is the Demon Commander of the Plague Legion, and his introduction is definitely quite poisonous. He will be joining the likes of Valtan and Vykas in providing challenging end-game content for players sometime in August 2022. 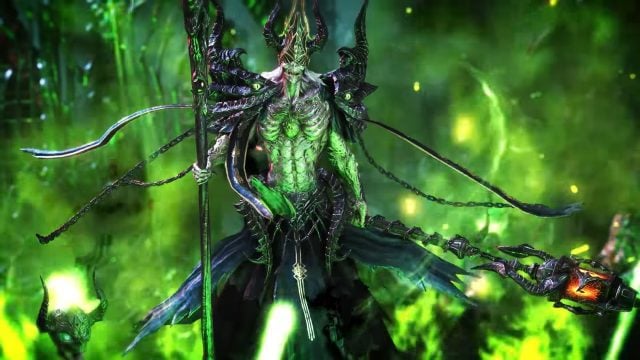 Players will also be getting new a Guardian Raid, Sonabell who is a deviation from another existing boss, Levanos.

Of course, more content is coming as well, such as new storylines, and islands, among other things. Things like the Ark Pass and various boosts are also being added to help players catch up to endgame or for people who want to gear up alt characters.

Among other things, the LOA on Summer event confirmed that multiple quality-of-life (QoL) changes are incoming, to make everyone’s lives easier. For instance, the friend system is getting a bit more streamlined. Instead of splitting up the list into “Friends” and “Roster Friends”, these two will now be combined. Players can also add friends from different servers (not regions though) and visit their respective strongholds.

The Tripod System will also be tweaked a bit to be easier for newcomers. Currently, Tripods, the skill customization system of Lost Ark, can be enhanced by getting certain pieces of gear. It became a tricky system where players would have to collect gear, and transfer over tripods from one item to another, making it a tad confusing for newcomers. The system was also heavily reliant on RNG, as you actually have to find the item, then the success of transferring a Tripod was also based on a random chance. 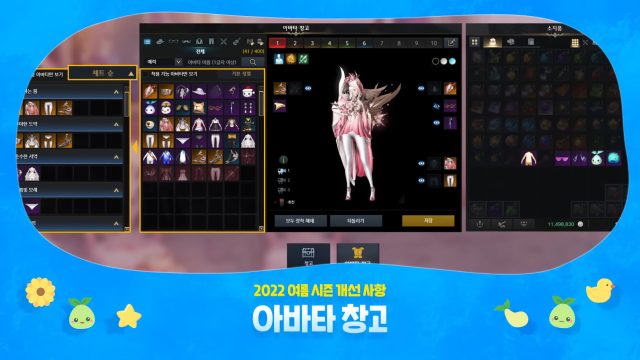 It looks like the team at Smilegate will simplify this and make it a bit more like the current Engraving System. Players will be able to collect “books” that will enhance specific Tripods in the future system.

Speaking of Tripods, the Training Ground will also be improved. Soon, players will be able to fully recreate builds and test them out against monsters and bosses. At the moment, you can only test out your damage in terms of Skills and Tripods. After the upgrade, you can also customize your loadout in terms of gear, gems, cards, and runes. 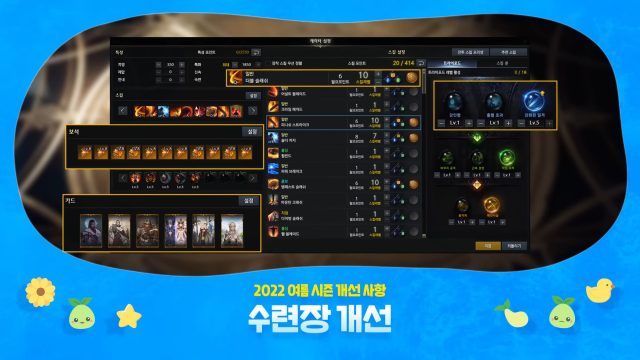 This should make the tested damage much better reflect a real-world scenario.

That is just the tip of the iceberg. The full list of upcoming changes is hard to discern unless you understand Korean. Thankfully, fan translations of the conference have been floating around the internet and should shed even more light on things to come. 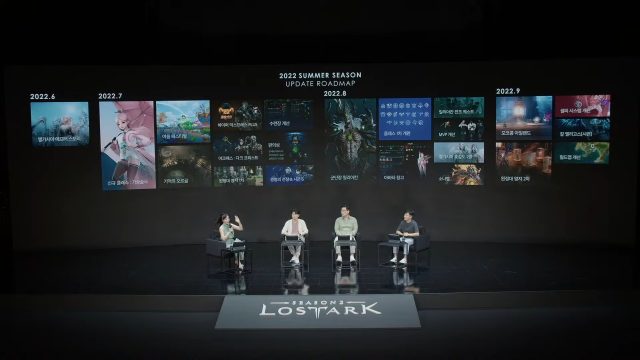 It will be quite a while though till we see these changes up in the west. Hopefully, the wait will not be too long.