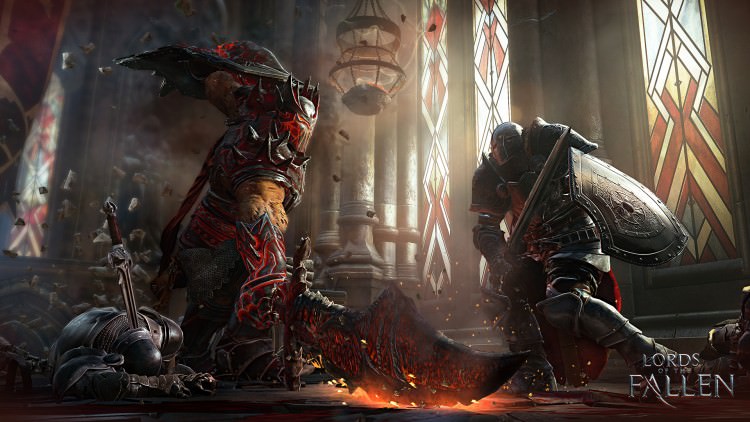 Has Demon’s Souls created a new genre? Dark Souls, Dark Souls 2, the upcoming Bloodborne, and Lords of the Fallen all share certain characteristics: unforgiving difficulty, repeated deaths, a need to study enemies to fight effectively, normal enemies that will slaughter you if you are impatient or make a mistake, relentless bosses that will destroy you several times before you have an inkling of their patterns to counter, levelling, grinding, and the potential loss of experience on defeat. We might call this the Hardcore Action-Role Playing Game, which as an acronym is close enough to HARDPG for me to have a stab (a carefully timed counter-stab of course) at naming the genre (and please let me know what the ‘D’ should stand for in the comments section below). First Warden is the first boss. He is upset his metal-clad eggplant idea doesn’t really work.

The reason I raise the genre question is because Demon’s Souls, Dark Souls and Bloodborne are all FROM Software titles, and it would be unfair to deem CI Games’ title as just copying FROM’s mojo. A genre is simply a set of parameters which inform game design, and it is legitimate to run with that if a developer has a vision. It is very clear that Lords of the Fallen is a labour of love for CI Games, and it uses these genre characteristics to deliver something familiar to Souls fans whilst still being distinct in its own right, and, most importantly, is enormously good fun. Even the training Rhogar is intimidating.

The game casts you as Harkyn, a criminal now in military service with his previous sins tattooed on his face. From a narrative perspective, this is the ‘deep-end’ approach: the game starts with a cutscene at a significant world event, then backtracks to the start of Harkyn’s quest – but even this is initially a mystery to the player. Who Harkyn is, what he is doing, and indeed what has befallen the world are subsequently introduced through cutscene, dialogue, and found records. As the game proper starts, Harkyn and a monk who has released him in order to secure his skills arrive at Keystone, a monastery-citadel, in search of Antanas, apparently the spiritual and possibly literal saviour of humanity. The second boss is the Commander, who really should consider armour for areas with vital organs

We first learn two things, of related but differing import. First is that there is a current plague which turns ordinary people into blind, senseless monsters. The other is that there was once a god, and in some indeterminate but ancient era mankind rose up against this god, defeated it, and buried it. The adherents of this old god, now called ‘Rhogar,’ were sealed away in another dimension by isolating a temple and cutting it away from the world. But as the game begins, the Rhogar are now invading the world, including many of their most powerful Lords, and the plague is spreading in the humans of the world, even amongst the priestly caste. On starting a game, the player is given two main choices in designing ‘their’ Harkyn: magic type and equipment selection. There are then three subsets of each: brawling, deception, and solace; and warrior, rogue, and cleric. The latter informs the type of armour Harkyn will wear (heavy, light, and medium respectively) and the former whether magic will be offensive, stealth, or healing. There then follows a brief tutorial on how to fight (another difference from the Souls series!) exhorting the player to understand enemies’ own strategies, and you’re on your own. Is it me, or am I looking a little bit, y’know, Witch King in this shot?

Where Dark Souls had a feeling of desolation supported by a narrative describing the end of everything and an end-of-cycle narrative, Lords of the Fallen creates a feeling of a world under siege, reinforced with the corpses of soldiers scattered throughout the monastery, and references to villages outside burned by the dimension-invading Rhogar. Combat, as mentioned, is tough. Regular enemies can deal serious damage, their patterns must be learned, and of course as the player progresses, existing enemy types become stronger and new enemies enter the frame. This is my hammer. There are many like it, but this one is mine.

As mentioned, there are RPG elements so the Harkyn-build can be leveled. There are two categories of experience in which to build, physical abilities and magical abilities. The player gains experience through defeating enemies, but chooses which pool to which to assign the experience. Experience can be translated to a magic point, which can then be assigned to a magic skill, or the equivalent point in physical attributes. The Rhogar puts his hands in the air, like he just don’t care. Harkyn does care, and sticks a burning spear through the his head.

However, here is where Lord of the Fallen‘s take on risk kicks in: like Souls, if the player is killed, the experience is dropped. If the player is killed returning to that experience, it’s lost. However, there is also a timer – once you’re resurrected, your dropped experience is ticking down percentage point by percentage point. Do you run past everyone to pick the maximum lot up, and then face a large mob of enemies? Or possibly just get killed and lose the whole stake? Or do you take a safer approach, but have a lower percentage pick-up when you finally make it back? In another reality, this complex mechanical thing on my arm would just be a Rolex.

This is not the only gamble presented to the player. There are crystalline save-points scattered along the way, at which garnered experience can be banked. Once banked, it is safe. However, carrying unsaved experience creates a multiplier on new experience. To put a context on this gamble, I accidentally walked into the fight with the Worshiper [sic] boss, and got punched through the earth. Resurrected at the last save point, I could go away and grind to get better – except all my experience was dropped in Worshiper’s arena and unavailable for recovery without restarting that fight. I had to either go back in and find a way to beat that boss, or grit my teeth and accept the loss of that chunk of experience. Some doorways are magically sealed

As mentioned, regular enemies should not be underestimated. Known types will be tougher in new areas, and new fiends will be added. In addition to adding magical and physical prowess, Harkyn also adds a magical gauntlet. While absorbing Harkyn’s magic reserves, this is independent of the magical abilities developed in each class. The gauntlet has a variety of firing modes, which can be mixed up in fighting stances and moves. It turned out the monster’s genitals were kept on its knee, just like in Star Trek 6

Bosses are worse. Again, here is a difference from Dark Souls. I remember both the Taurus Demon and Capra Demon, which would wipe the player out in two or three hits if faced directly, and needed a highly specific action to defeat them – for example, twice climbing the tower and jumping on the Taurus Demon. Bosses in Lords of the Fallen can be defeated without such specific actions. However, this is most definitely not to say they are of the “strafe left and wait for weakness” school of boss design. All will change attack once a certain amount of damage is done: some will add mobs, some will change attacks, some will add a self-heal. None will give much quarter. Defeating them will require the player to figure out which style works best for them. And possibly shouting at their monitor or TV once in a while. Not that I did. No sirree. There are also a variety of what can only be described as warp gates scattered around. These will only open when a certain major enemy has been killed. If the player moves through, the resulting dimension is dark, and while enemies can be targeted, they do not display their health. Wandering off the beaten path alone can damage health. These bonus areas can garner new armour and weapons, but can also spell death by attacks from regular enemies you simply did not see in the dark. That’s a spectacular looking chest – thank you, evil shadow death world. And I never thought I’d have to say that again.

There is a variety of different weapons and armour types, which can largely be swapped, although it seems you cannot change to double wield weapons unless selecting the rogue type initially. The player will also find runes along the way, which can be deciphered and then added to weapons or armour. These are in standard RPG areas like fire, poison, magic, or luck. Changing the armour type you favour generally means understanding how heavy you make Harkyn, and adding attribute points accordingly. Adding runes requires finding the blacksmith, who reminded me of Vulgrim in the Darksiders franchise – once activated, for narrative reasons, he can be summoned in both worlds from an appropriate station. And frankly the angular and chunky character design of Harkyn and others also struck me as a little Darksiders-esque, though that is not necessarily a bad thing. This is just pretty.

Souls allows free navigation from a hub once the hub is reached. Lords of the Fallen looks on the surface a little more linear, but the plot is advanced moving between Keystone and the Rhogar temple, and there are multiple hidden areas. Once activated, the Blacksmith can be accessed from any anvil like this in either world.

Playing this on a reasonably powered gaming PC with an NVIDIA card, the game looks stunning on High (and not Very High) settings. Hopefully the PS4 and Xbox One versions will finally do justice to this generation of consoles, as the generation straddling to date has been disappointing. If there is criticism, it is that, despite the narrative describing the requirements of moving from Keystone to the Rhogar Temple, it is sometimes not clear where the player needs to go next to advance the plot. In summary, this is a good time to be a fan of the Souls approach. There is DLC for Dark Souls 2, Bloodborne is going Van Helsing early next year, and Lords of the Fallen is taking a Lord of the Rings approach through a Darksiders filter. I must again note this is clearly a labour of love for the people involved, and it shows. So I say hurrah for new genre, and a hearty welcome for a new, difficult and rewarding IP.

Visit the Lords of the Fallen Wiki

9
Summary: As a vanguard title for the new generation of Consoles, Lords of the Fallen is a brave project by a smaller studio trying out the big leagues. The result is graphically stunning and clearly a work of love, that many players will find satisfies their ARPG itch. Some may find it limiting due to lack of MP or Character Creation, but we genuinely enjoyed every minute we spent with the game, and recommend it to any Souls fan with an open mind to try some new things.
Story & Setting (8.5)
Design, Visual & Audio (9.5)
Replayability (8)
Gameplay (9.5)
Pricepoint (9)

10 comments on “Lords of the Fallen – Review”