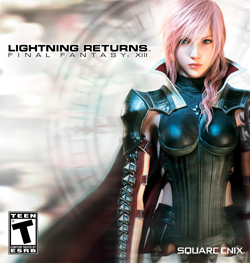 I know it’s a little odd to review a demo of a product but hear me out.  And by the way, this next sentence might be the only one you need to read for this review anyway….

I’m reviewing the demo as it convincingly illustrated why I will not be getting the full game.  Unless it comes to Plus.  Then I’ll download it (because I’m an eHoarder).  But unless all my games mysteriously dry up (not likely for a couple of years with the impending release of Dark Souls II) it’s a safe assumption that I will have somewhere in the neighborhood of 0% motivation to play the damn thing.

So yeah, don’t bother with this game.

This was certainly a fast review.

Hmmmm….anyone wanna hang out?  Talk about wings or something?

Oh, you want REASONS why you shouldn’t buy it?  *Sigh*

First off I’d like to start with positives.  As with most any Final Fantasy game, it’s graphically top of the heap.  From top to bottom it looks great (there’ll be some negatives about “top to bottom” later, stay tuned).  The score is as great as we’ve come to expect.  Uhhhh…[inaudible mumbling that’s meant to make it sound like I’m adding a third thing that was good about the demo]

Here’s what went down, the demo loads up and I’m greeted with a FANTASTICALLY GORGEOUS sequence which shows Lightning appearing and kicking some real tail.  Snow (you remember him right?) looks down from this balcony, seems to take offense at something and suddenly all hell breaks loose as they both kill some weird giant critters and Lightning and Snow (great song by Woods of Ypres) fight each other for some reason.  Then, as Lightning may or may not be about to kill Snow (Informer…hemmina hummina something play…a licky boom boom waah) some girl who looks like about 85% of females in the last couple Final Fantasy games shows up and may or may not have stopped the whole thing.  The problem is that everyone’s lips are moving but the only audio is called “music” instead of “voices.”

So I load the actual gameplay part of the demo hoping that some illumination will come to pass.  And proceed to sit through the EXACT SAME SEQUENCE I just described with the exception of the music being replaced with different music (I think) and, oh yeah….everyone talking like it looked like they should be in the first place.  So it does turn out Lightning and Snow are fighting about stuff and Generic Girl did stop Lightning from winning.  And something about Lightning being chosen by God.  Then we set off to find Snow who ran away because he’s cool like that.
Then there’s a flicker of Hope. I don’t mean “expectation” or any other definition, I mean the character. Hope, Lightning’s little buddy is apparently her radio support. Which makes sense and I suppose there’s no real issue with this but he is the source of several reality breaking moments in the name of gameplay. For instance, instead of text on screen to indicate gameplay mechanics, in comes Hope to tell Lightning “helpful” information that is vicariously conveyed to the player. Let’s explore the stupidity of this for a moment.

Remember that killer movie sequence I referenced earlier? This video shows our protagonist bouncing around like a super ball from a gumball machine that’s been whipped inside an elevator (we did this in college, it’s fun). Able to leap tall buildings with a single bound? Oh baby, she’s got it. Why then, does she require Hope to inform her that she “should be able” to jump on top of boxes that are approximately three foot high? I agree Hope, I would expect she could handle that. I know it’s just part of a tutorial and it’s a small gripe but it’s indicative of the deeper carelessness that is pervasive within the demo.  Text on screen would have been all that was needed to let me know “this button makes you climb on small obstacles.”

I probably sound negative for the sake of negativity but I promise it’s justified. Let’s get to the actual game mechanics.

Combat begins in the field like you’d expect. There’s an element in which you try to time a strike from the world view on the visual aspect of the monster. A well timed hit will start the battle with the monster being weakened. Allowing yourself to be struck first will yield a bonus for the baddies. I could see the need to take a literal swing at EVERY random encounter becoming tedious rather quickly. It’s an interesting concept but we all know that by the end of most RPGs fights start to become a chore. The random encounter system (it’s actually not random at all but you get the idea) doesn’t seem significantly different in this one to feel that fighting for the 10,000th time won’t get boring. Adding to this chore by putting yet another step to the process seems like a bad idea.

I’m saving the worst for last by the way (and we’re almost there, just one more detour)…

The combat is driven by “schema” which appears to replace the party and class systems we’re all used to. Instead of having three party members, all of whom have different roles, Lightning takes all the jobs onto herself and can switch between three of them during battle. The demo allowed for several different schema including the Lightning we all know and tolerated, a dragoon, a couple mage types and some other stuff. It was a good amount of variety for a demo. I will give them that. The end result is a feeling that the game is fundamentally a deviation from franchise standards. In and of itself I can live with that, and maybe even embrace the lone warrior concept except they decided that schemas absolutely must be, no question about it, tied to….

If you recognize this outfit; good for you. If you see it as anything more than a shameless attempt to cash in on one of their better titles; tsk tsk. Same goes for the Cloud outfit.

Don’t get me wrong. The black mage outfit is super cute (there’s the “top to bottom” reference I made earlier). What with the little short shorts under the flowing robe. A nice hat sets off the ensemble. But again, the reality of a heated battle is destroyed to see the main character flipping between outfits at maniacal speed. It’s a distraction to what could have been some epic cinematic fights in real time and the unnecessary “zany” nature of the mechanic seems like a betrayal of the theoretical seriousness of the story and characters from FFXIII. Other games have deployed a similar combat system (Ninja Gaiden post NES days, Heavenly Sword, Darksiders, and many many more) except that they use the logical and reality sustaining system of just changing weapons when different abilities are needed.  It could just be me.  For all I know the gaming world has been crying out for Kratos to accessorize on the fly.

In no way, shape or form is this image indicative of any problem with the game. Nope. Sure isn’t. Insert another “top to bottom” reference here. Then giggle that I used the word “insert.”

And here it is, the last straw. The combat is awful. I admit it. I could likely be persuaded to forgive everything I just whined about if the gameplay was fun. Sadly, most of what made the Final Fantasy series an industry standard has vanished. They’ve toyed with more real time combat and I’m ok with that. There was always a huge strategy element to be found and joy in watching it unfold. And honestly, the combat system was a highlight of FFXIII in my opinion. It was a good blend of speed and strategy.  I can see the strategy elements you’d need to have here. Really I can. You can only load three schema (which is just like selecting party members). Get caught without the right one and you’re gonna have a hard time. And in battle, successfully managing the rapid switches is crucial. So yeah, there’s strategy. But randomly flipping R1 and L1 to get to the right schema just wasn’t fun. It felt clunky and awkward.

To make matters worse, they forgot a core element of real time combat. Speed. In a game like Devil May Cry (I enjoyed DMC a lot more than I imagined I would by the way) the combat felt fast and fluid. Here, our supercharged Lightning often reacts like she’d have trouble avoiding her own shoelaces. While I enjoy molasses, my heroine should not move like she’s wading in it. Evading attacks requires you to evade the attacks.  It’s just not pretty.  And yes it gets even worse. A big part of Final Fantasy combat is enjoying the spectacle of the fight. Imagine my joy when I saw that Blizzaga, one of the coolest (get it) spells in the series was in the demo for my amusement. There’s few spells that satisfy an adventurer like myself like the giant shards of ice and chaos known as “Blizzaga” does. But all the aforementioned problems lead to a significant loss of visuals. Managing your schema means switching often as they each have limited use that recharges when inactive. In other words, blasting off Blizzaga, a third tier magic in most FF games, uses a huge chunk of that schema’s gauge. This necessitates flipping to another schema almost immediately. This pattern of hectic switching is the norm for combat. Combine this insanity with the molasses speed of Lightning and what you have is a system in which you’re paying attention to anything but the cinematic effects of powerful techniques. From what I could tell, Blizzaga looked cool. The game made it hard for me to confirm this though.

If you like pretty colors and lots of outfits this game is a must have.  If you like solid gameplay…not so much.

God I hope so