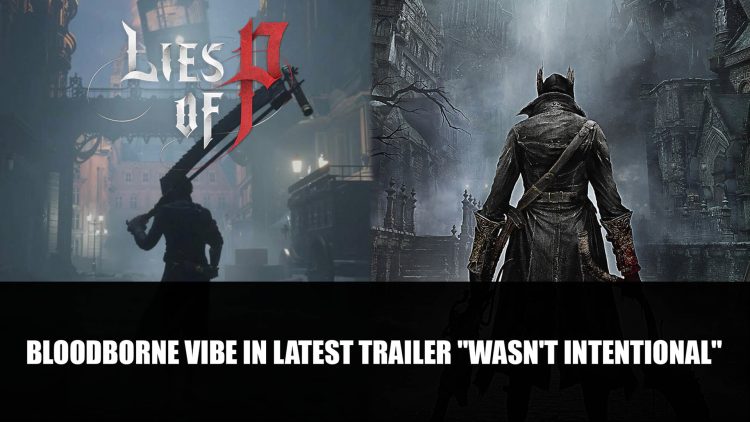 The latest trailer for the souls-like title Lies of P has a Bloodborne feel to it, but was according to the game’s lead producer it “wasn’t intentional”.

The upcoming souls-like Lies of P is based on the fairy tale Pinocchio but its latest trailer looks to have some inspiration from other titles including Bloodborne. The trailer shows some dark alleys and some areas that take on a Yharnam vibe. However, the game’s lead producer Ji-Won Choi has explained in an article by Kotaku that the visual comparison was not intentional although they are inspired by this genre of game, for this retelling of Pinnochio:

Though we’re greatly honoured that many players felt the ‘Bloodborne vibe’ through our trailer release, it definitely wasn’t intentional. Still, Bloodborne and other Souls-like titles are certainly inspirational.

While the game may have not intentionaly sought after looking like Bloodborne, Choi explains how the game’s mechanics are closer to a souls-like, saying that Lies of P “is most Souls-like in the aspects of death penalty and difficulty level.”

The theme for the setting also strays away from the typical dark fantasy set title, not set in the middle ages, but set in 19th century Europe, The Belle Époque era. This is apparent in the architecture and the idea of the once upstanding city now falling apart.

In case you missed it, Lies of P takes inspiration from from Carlo Collodi’s Pinocchio classic novel, giving it a creepy twist in this Action-RPG. The developer behind Lies of P is Round8 Studio who developed Bless Unleashed. The main character takes a souls-like approach, sporting a prosthetic arm, while battling it out against these monstrous-looking dolls. From the Steam page the game is outlined to be set in the abandoned city of Krat, where you wake up with a note that reads “Find Mr. Geppetto. He’s here in the city.”

You can combine weapons, creating some new as well as research different combinations. As your character is a doll, you can change and upgrade parts to gain new skills, so it’s not just the arm that can be used to your advantage. The mechanical arm has additional tools or weapons such as a grappling hook and more not too dissimilar to Sekiro, but sounds like there is more customisation in what it can do. Whether nose growing comes into play for the lies you tell is too soon to tell, and has yet to be revealed.

You can check out the latest trailer below and judge for yourself the inspirations:

Lies of P is currently listed on Steam and according to Wccftech for consoles as well but no release date has been announced as of yet, but since this is alpha gameplay footage it looks to be in the early stages of development.

For a round up of recent RPG news find it here in Top RPG News Of The Week: December 5th (The Game Awards 2021, Starfield, Kingdoms Of Amalur And More!).