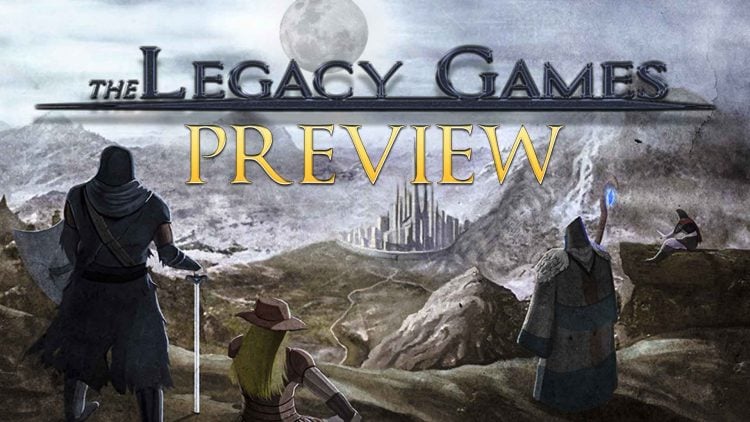 Did you like The Banner Saga?  Australian indie studio Red Rock Softworks thinks they can do one better with their upcoming game, The Legacy Games.  Heavily inspired by games like Darkest Dungeon  and Divinity: Original Sin,  Red Rock Softworks hopes to offer a unique twist on the familiar gameplay of The Banner Saga  for experienced tactical RPG gamers. The Legacy Games  will be releasing for the PC (exact date unknown), with consoles being unconfirmed but not impossible if the Kickstarter campaign is successful enough.

The world of The Legacy Games  tells a history of war. By the end of it, the fighting had gone to such lengths that one kingdom was even using blood magic to summon and bind demons as weapons of war against their enemies. This proved to be the final straw, and the gods of the land answered the prayers of their followers to put an end to the madness.

To commemorate the end of the war, an annual tournament was held in the holy city of Tristan. Naturally, no one has yet managed to win it, as the trials within are, in fact, more demons and monsters. And the Old Ones who lead them. Looks like the whole “summon demons to crush our enemies” plan might’ve backfired a bit.

But just because the wars are over doesn’t mean everything is bright and happy. The Legacy Games  promises to tell a tale of greed, conflict, and survival, where every choice will have consequences.

While at first glance the game appears to draw most of its inspiration from The Banner Saga,  Red Rock Softworks actually claims to pull more from Darkest Dungeon  and Divinity: Original Sin  for mechanics and gameplay ideas. Players can expect party composition, attack combos, positioning, and even weather conditions to play a large part in the tactical experience.

Combining the grid field and positioning of The Banner Saga,  Darkest Dungeon’s  character mechanics, and Divinity: Original Sin’s  resource management and combos, The Legacy Games  promises a best-of tactical experience with enough depth to give even the most hardcore TRPG gamers a workout.

Character classes range from stalwart knights to elemental sorceresses, each one filling the traditional party roles we’ve all come to know. But rather than simply staying that way, each class can be equipped with abilities and traits from a much larger pool, allowing the player to customize their party to suit nearly any strategy. Even seemingly basic classes like the archer can carry their weight in the late game with magical arrows, AoE effects, and oversized greatbows.

Instead of the usual “Move > Attack” system used by most turn-based games, The Legacy Games  uses an action point (AP) system to determine what each character can do in a turn. How you spend those action points is up to you, as is whether or not you spend them all right away or try to conserve points for later. Some skills even reward judicious use of action points like the assassin’s Coup de Grace, which deals an extra 100% damage for every other skill that assassin used before in the same turn.

Your enemies are no slouch in the tactics department either, and studying what unique abilities your foes bring to the table is key to surviving the fight. The map is divided into four areas, each populated by a separate category of monster: the Undying, Demons, Eldritch Horrors, and Titans. How you approach each area will vary based on what threats you expect to find within, pushing the player to find new solutions where old ones no longer apply.

As much work as Red Rock Softworks claims to have put into the game so far, everything still manages to look and sound rough and unfinished. Whether the game will ever develop its own art-style remains to be seen, and as of now it’s (rather blatantly) reusing assets seen in other games. The sorceress looks like Dark Souls 2’s  Desert Sorceresses, the assassin looks like Ezio from Assassin’s Creed,  and so on. Considering they’re barely 0.5% of the way into their Kickstarter campaign, this may hopefully improve down the line.

The audio is similarly basic, but at least adequately reflects the steadily mounting tension of turn-based combat. There isn’t much to say here, aside from how the one or two tracks I’ve heard so far sound like trailer music, but that could be because they were  trailer music. Attack, magic, and enemy audio are, at least, clearly identifiable, both in sound and imagery. While nothing stands out and there isn’t a whole lot of character to it all, it’s at least easy enough to tell what’s going on in a battle.

Red Rock Softworks is ambitious, that’s for sure. While The Legacy Games  may not look like much on the surface, it promises much in the way of mechanical depth without being overly complicated. There may be room for improvement, but this game is clearly one that aims for gameplay above all else.

Curious about The Legacy Games?  Visit their official website, Kickstarter, or Steam page!