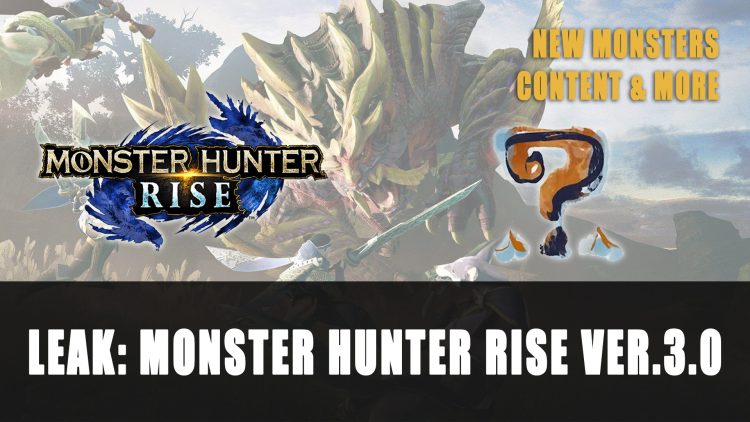 Capcom will be revealing the content for Monster Hunter Rise update 3.0. but leaks have already been making the rounds.

Capcom have already announced they will be hosting a live stream on May 26th at 7am PDT, with details about the upcoming free title update for Monster Hunter Rise. Update Ver.3.0 will require around 1.4 GB according to the developer. The broadcast will also include more information about Monster Hunter Stories 2: Wings of Ruin which is a turn-based RPG Monster Hunter game releasing on July 9th.

Previously Capcom had announced a brief roadmap in terms of content, revealing several new monsters and a new ending will be arriving with Ver.3.0. The developer has remained tight-lipped on which monsters will be coming in the next update but that doesn’t mean info hasn’t arisen and been leaked.

Tune in for details on #MHRise Update Ver. 3.0 and the latest news on #MHStories2.

A datamined list of monsters has been released online this year, with narrowing down what monsters have already been released and a little speculation, the Monster Hunter Rise community has gathered what is to be believed as the monsters coming in the next major update.

A dataminer by the name of AsteriskAmpersand unveiled a list of monsters datamined from Monster Hunter Rise, which has a full list of monsters that were available in the demo, full launch and the update 2.0.

This is a list of monsters. Some say it might be in the game files. Let’s just call it my very specific wishlist though:https://t.co/t9o1iyeHdM

On that list includes two elder dragons and an Apex. Valstrax is suspected to be one of the elder dragons arriving in update 3.0, but not just that a new variant Crimson Glow Valstrax and All Mother Narwa. There is also an Apex Zinogre apparently coming. The dataminer is also adamant that that Crimson Glow is not just a new name for Valstrax but because of the “variant folder structure”.

Apex Zin has leftover files, Valstrax is confirmed to be coming as a variant (Crimson Glow, no trace of the base version of him). That plus what Capcom already confirmed makes the next update almost guaranteed to be Allmother, Crimson Glow and Not-Thunderlord

While this might not seem as much content as update 2.0, compared to what happened with Monster Hunter World, the content roadmap is similar, with the release of one or two monsters with each update.

There is also speculation of a crossover event of some kind that might arise, as World also received a slew of them, including Resident Evil 2, The Witcher, Final Fantasy XIV and more. But this might come at a later date. As for what’s beyond 3.0. there could be an expansion, but might not be released until the following year.

Of course take all this with a grain of salt as nothing has been confirmed yet by Capcom themselves. But the datamined info has been correct for the previously released monsters so this could be true.

We will find out if this is all correct in the upcoming broadcast which will be streamed on May 26th.

Monster Hunter Rise is now available on Nintendo Switch and will be coming to PC next year in 2022.

For more news be sure to check out next Hollow Knight: Silksong Will Not Be At E3 2021 and Baldur’s Gate: Dark Alliance Launches On Nintendo Switch Today.