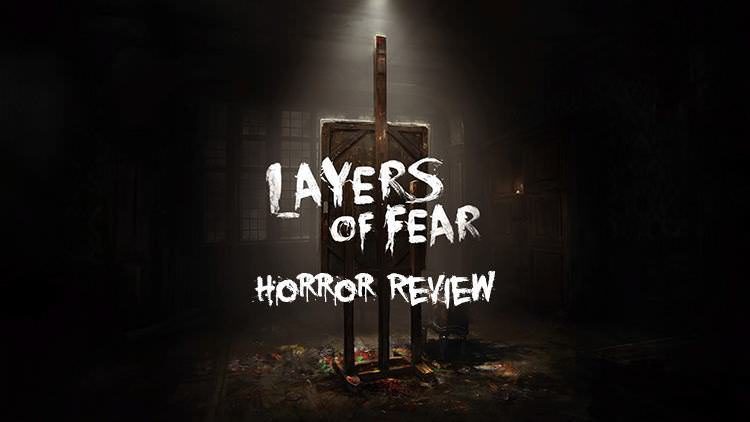 Considering the fact that the central conceit of this game is about painting, and that it’s a horror game, the title Layers of Fear is unimaginative and functional at best, being a simple sign-posting of its six-act structure. This is reflective of the game at its worst: a bit blunt and obvious. Happily, this is in contrast to the majority of the game, which manages some interesting ideas backed up by excellent visuals and sound, creating a consistently on-edge atmosphere while telling a story with some disturbing implications. 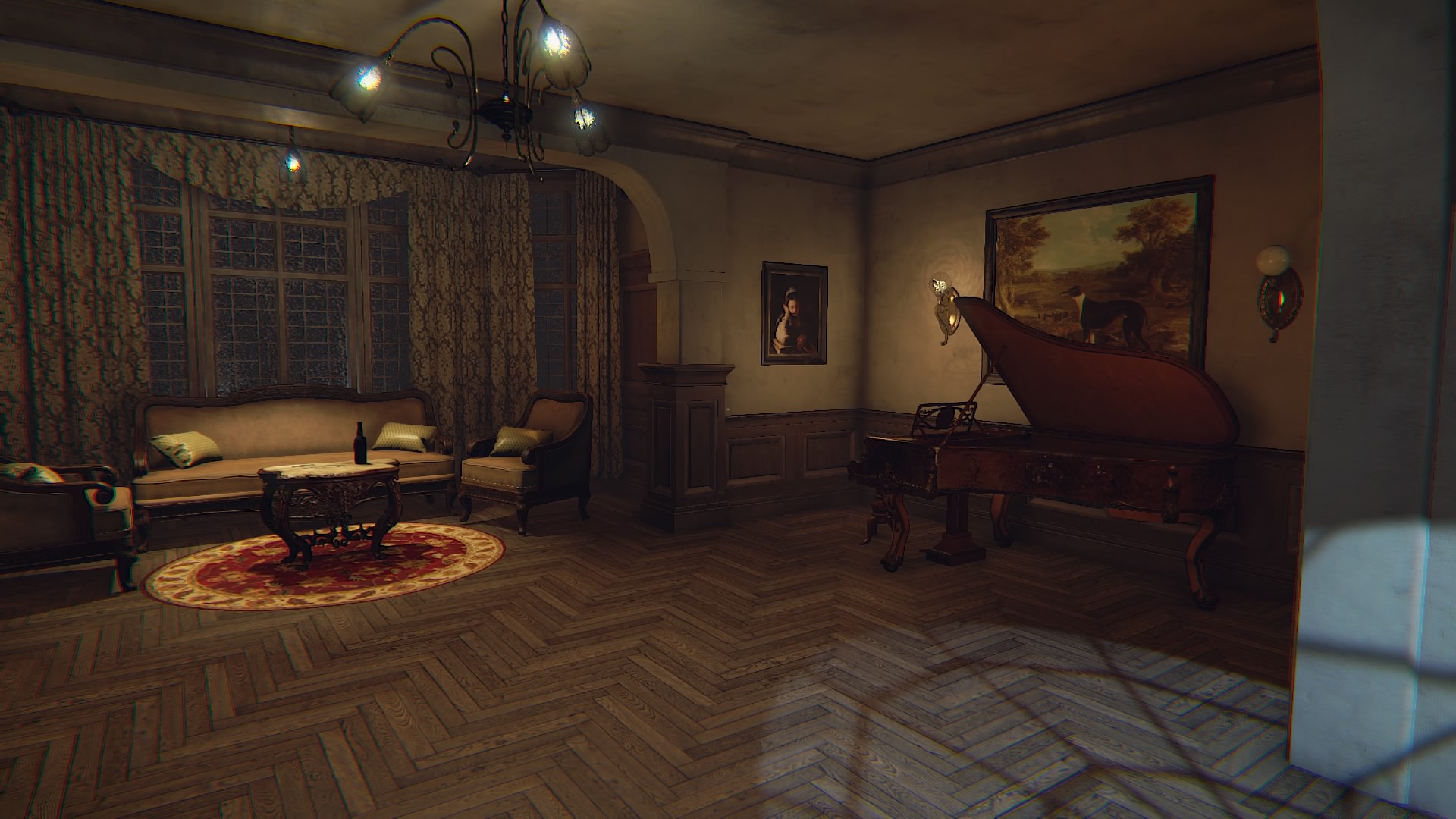 Initially, with the rain pouring outside, this looks a lovely, cosy place to spend the evening. I think we can all guess how that’s going to turn out.

Controls are simple enough, as befits a story/exploration orientated game, although mapping to the PS4 controller has some odd choices, such as putting the subtitle toggle on square, and, when examining objects, rotation is the on the left stick, rather than the right which is used to steer the protagonist’s view in the main part of the game. I often found myself trying to rotate with right stick before remembering this is reversed in object view. Conversely, when manipulating something, such as opening the lid of a chest for example, this is effected with the same right stick as main navigation, which often results in an attempt to open something results in you looking away from it insteaed. I also noted an inordinately long load time, which I also noticed with SOMA, and wonder if there is some issue with indie titles starting life on PC. 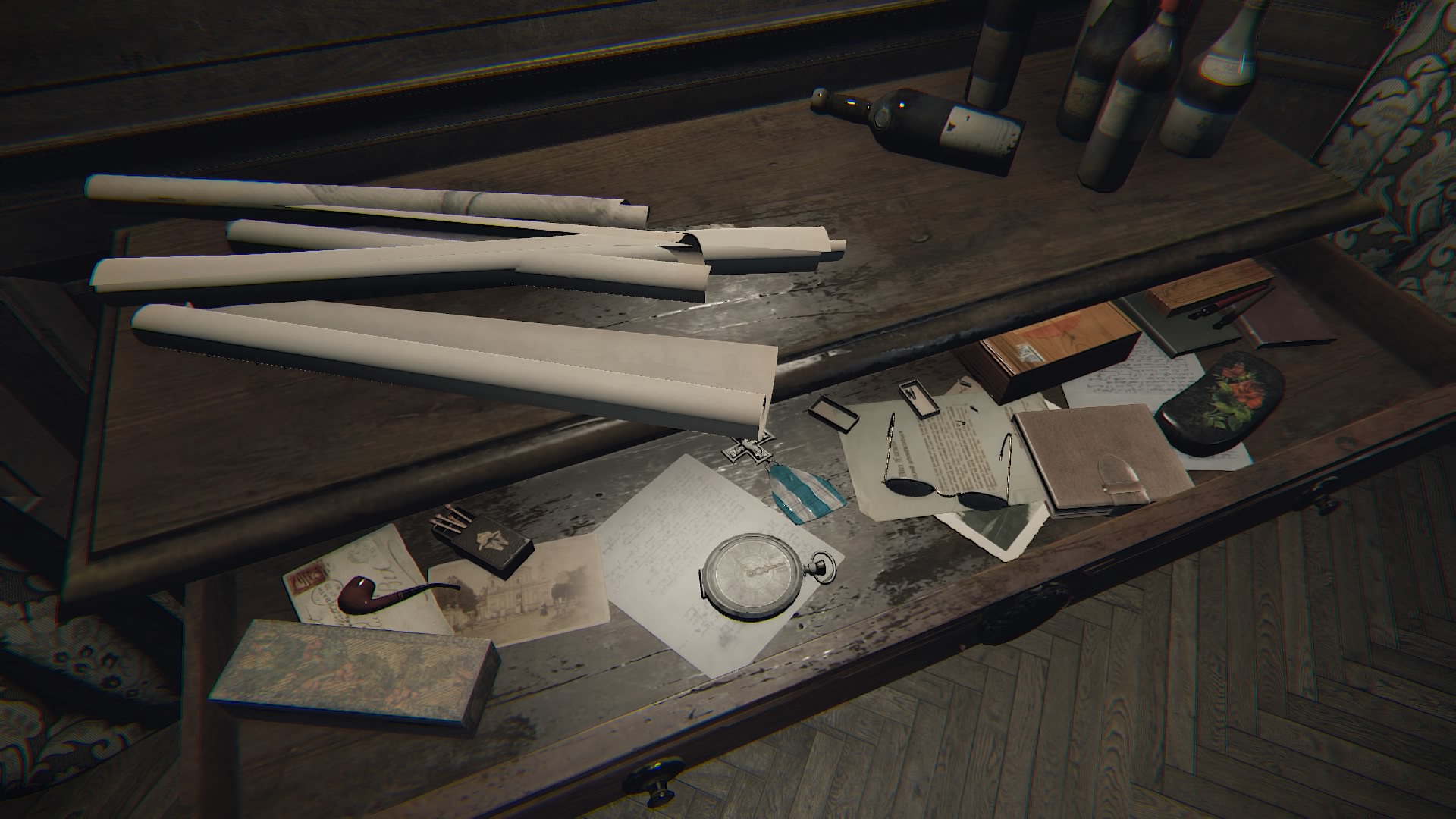 There’s a surprising prevalence of military medals in the drawers and cabinets throughout the house. I suppose they had to put something in them before game discs.

However, as this is not Until Dawn with time sensitive doors to slam, these are minor issues which don’t overly detract from the experience. The game then starts with an ominous and oblique voiceover indicating that the protagonist must deserve how he feels, but must nonetheless finish (what must be finished is not clearly stated). This is then followed by a quotation from Wilde’s The Picture of Dorian Gray that any true portrait is a reflection of the artist, not the subject. The protagonist then enters the house, which as the game’s sole environment proves a surprisingly unrestrictive game world for reasons which become apparent a short distance in. 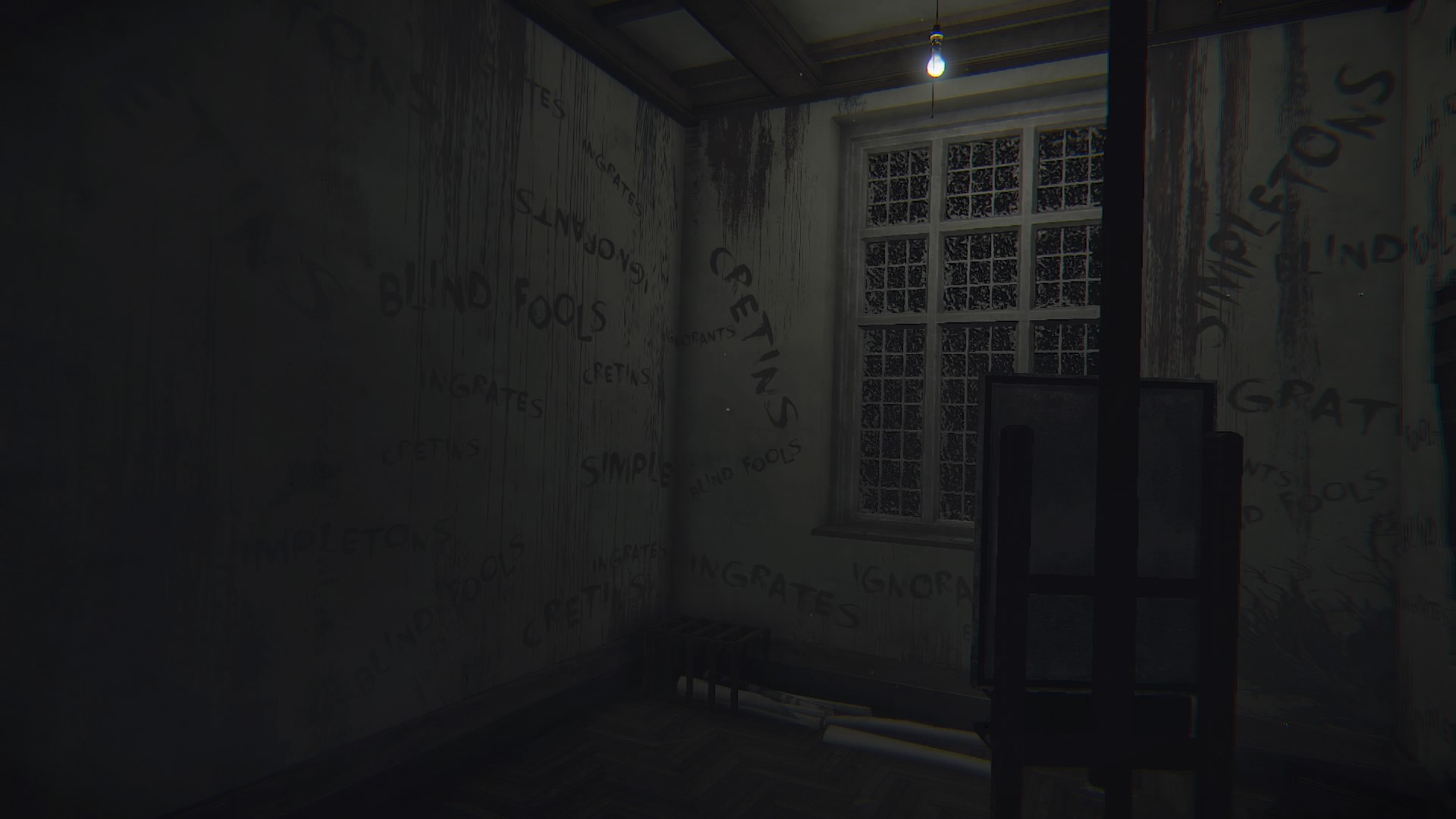 The game has excellent graphical design. The player initially enters through the hall and into a dining room, which looks gorgeous, gothic, Victorian, and somehow really lived-in. There are a number of paintings throughout the house as well, which are well depicted and, perhaps not surprisingly, of some peculiar subjects. There is a short explanation of the game controls, which also introduces some of the methods by which the game will unveil its story: objects to pick up which trigger memories, and notes to read from various of the characters in the artist’s life. 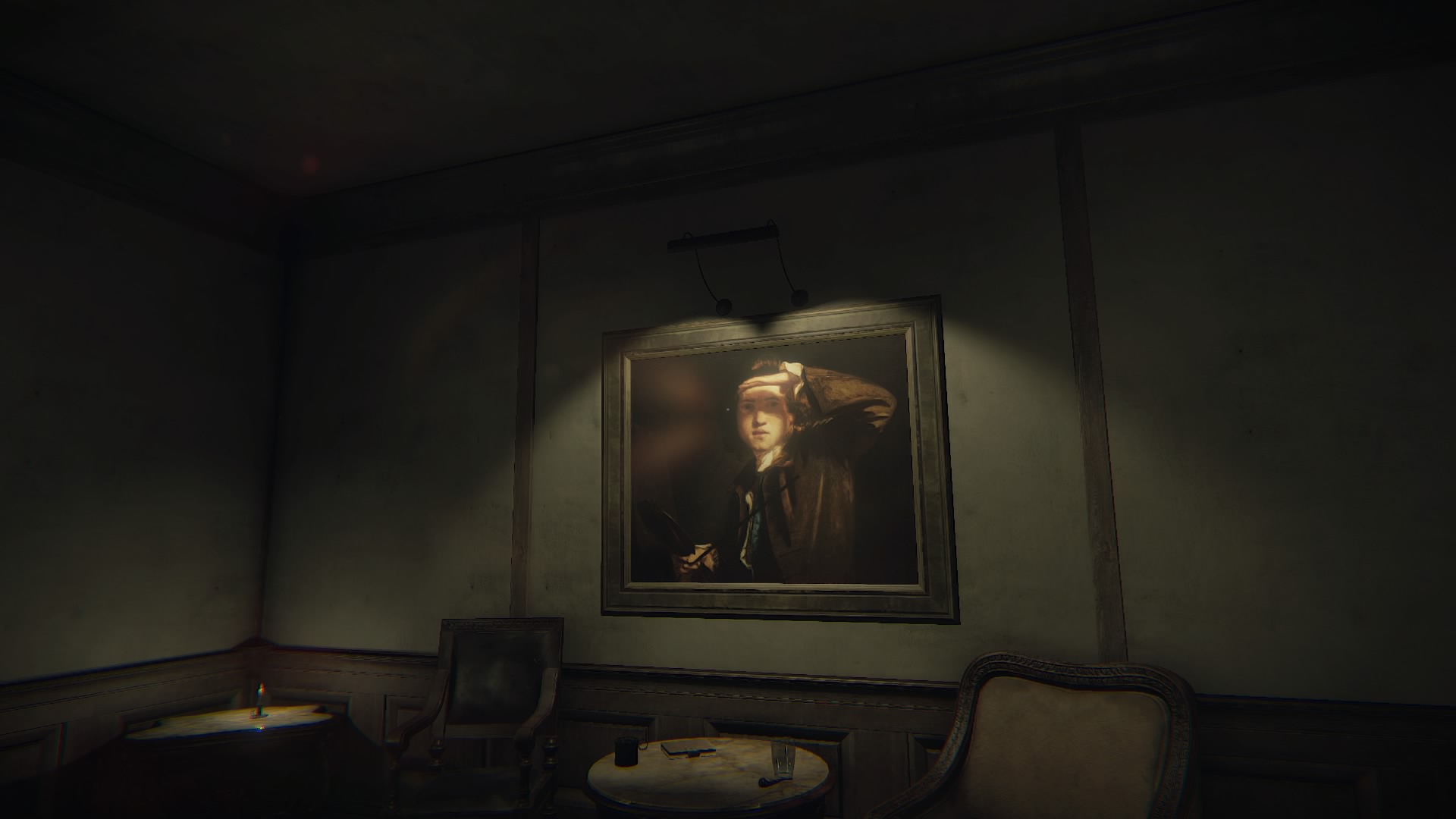 So far, so standard. While these mechanisms can be effective in games, they are hardly distinctive. Then the game sends you on your first task: find the keys to your workshop. I only realised later why this was deliberately done. As a function of survival, most gamers will mentally map environments. By taking a short walk around the place looking for the keys, the player will naturally map the scale and layout of the house. This will then shortly be used against you, as when the artist enters the workshop for the first time, explores its contents, then turns to leave, the room outside is not the one you originally left. 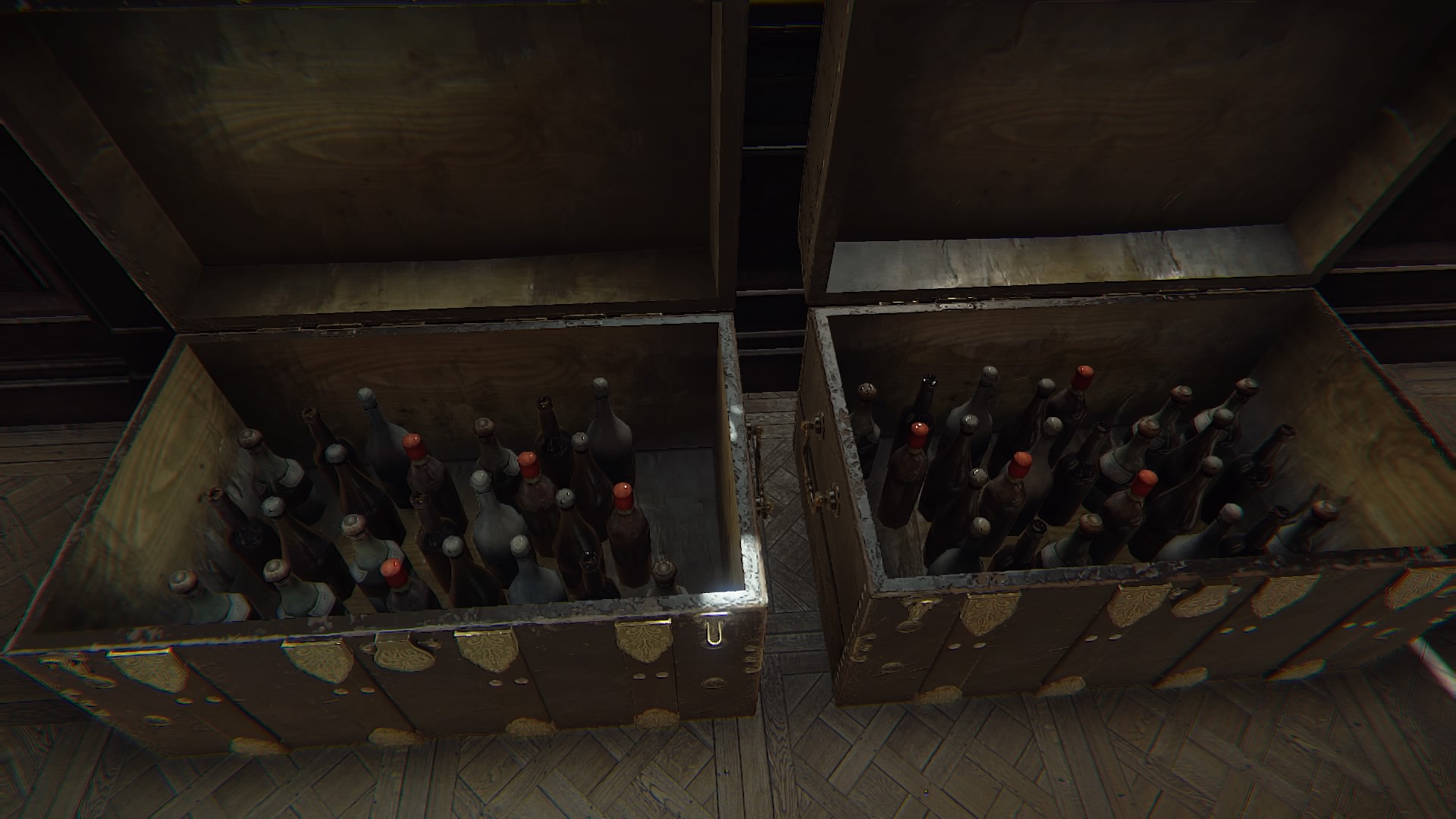 The first time this happens there is some sinister music as you exit the room, but otherwise no warning this is coming, and it’s very effective. From this point on, there is no predicting the configuration of the house, the only constant being the workshop to which the artist returns on uncovering further information about the history of the house, his family, and his descent into insanity. 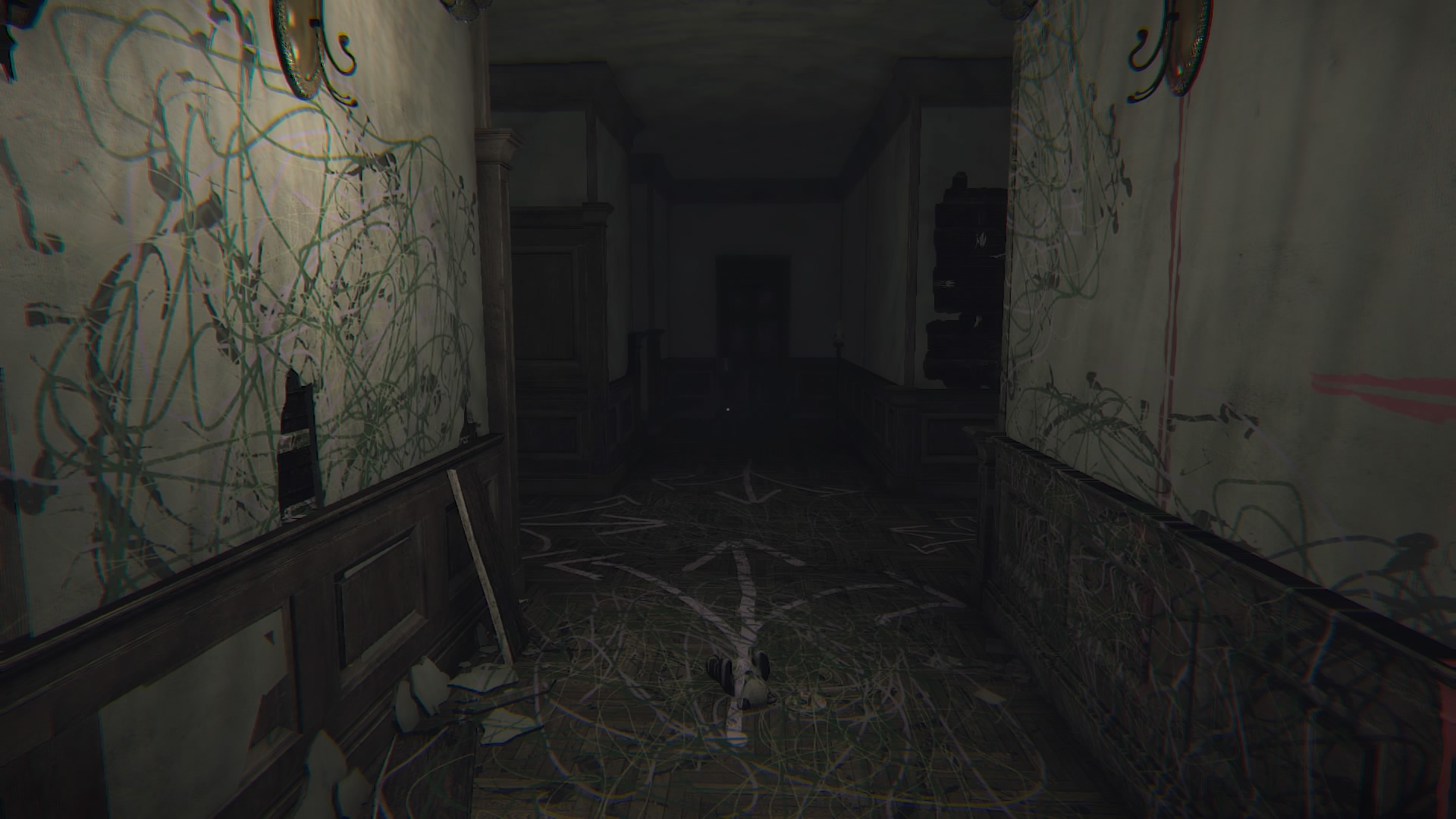 Despite appearances, this is fairly accurate sign-posting.

While this is a slow-burner of a game, there is nonetheless a build-up of pressure and later in the game, there are changes in the ways the rooms themselves change when you’re not looking. This kind of technique can work well in the movies, as the director can control the actors and where the camera is looking. A game designer cannot predict where the player will look, so the design underpinning when the changes happen is impressive. There were a number of occasions I smiled in appreciation during some of the change sequences as the world moved around me, but out of my direct line of sight. Inevitably you are going to look around when you enter an environment to orientate yourself and identify objects and exits, except here, when you look back that exit might be gone, or a door which led somewhere now presents a brick wall when opened. 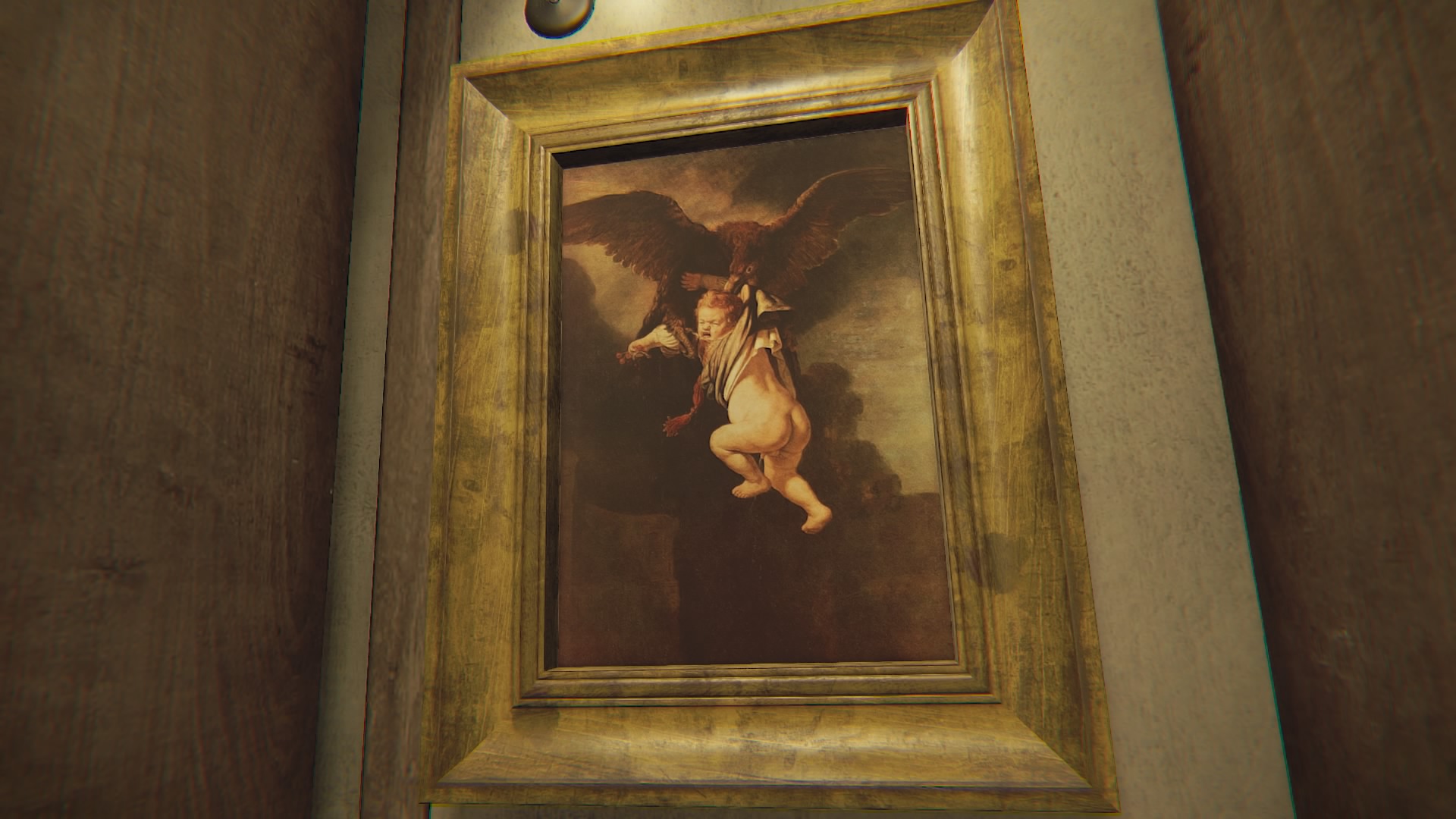 This seems exactly the type of picture you’d want in a house with a small child.

Later in the game, presumably at the deeper points of the artist’s madness, things become more scrambled, with black ooze lining corridors, painted arrows causing confusion, room contents changing if the player turns on the lights, and even an Escher-esque denial of proportion and direction. In a way it’s playful with its own design. You see something painted on a wall, and it could actually be that thing and not just a painting of it. Things switch from being painted to real, an interesting exposition of the state of the protagonist’s mind.  Overall this creates a constant feeling of being on edge, as everything changes and you have no firm place to stand. 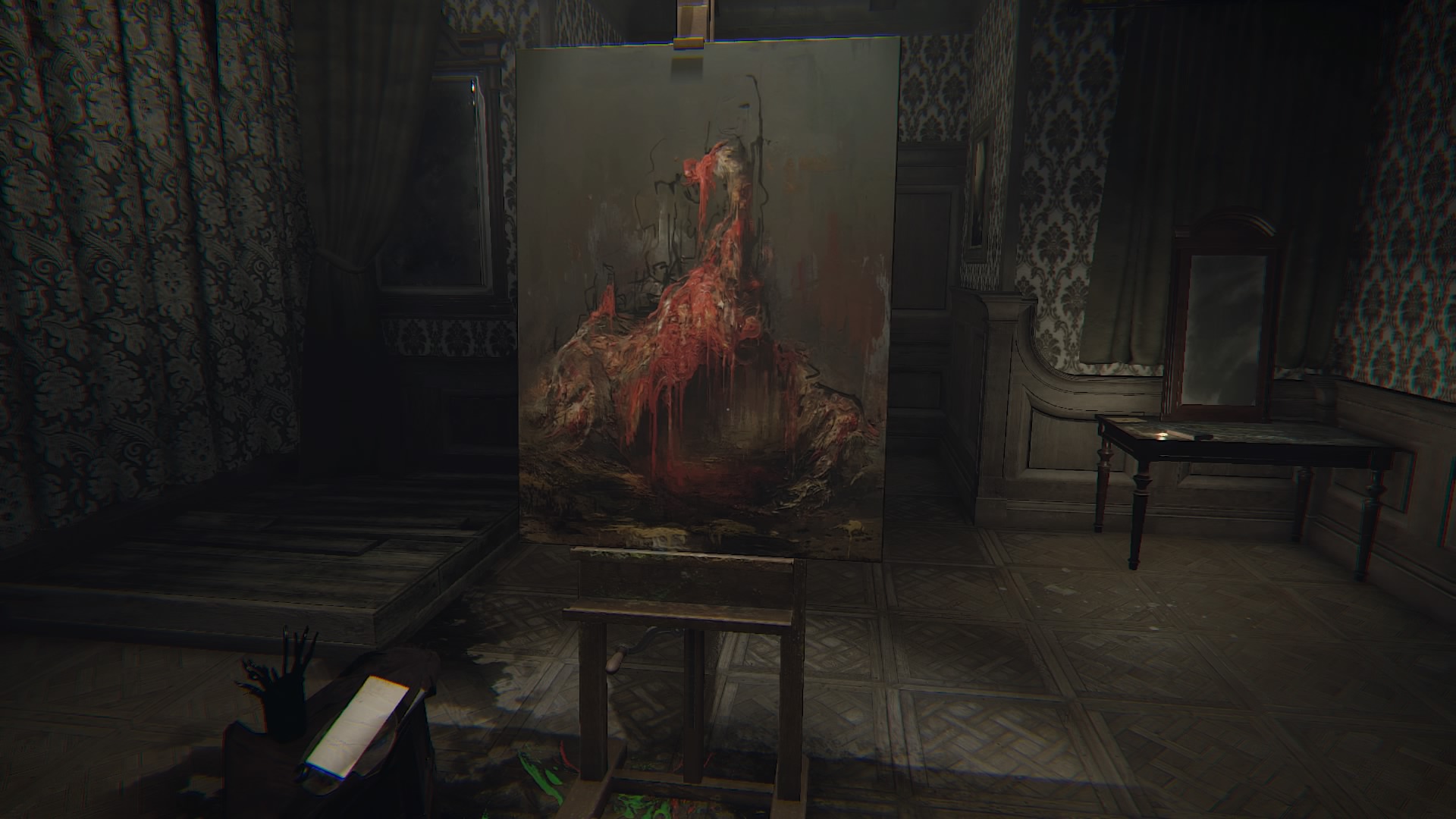 Mr Melty-Turkey was most pleased with the accuracy of his portrait.

There is also an interesting approach to the game’s puzzles. While the first ones are de rigeur for the genre (do a set thing, and the number you need for a combination lock appears), later puzzles can have audio and spatial components. For example, in one section I realized that the ringing phone I could hear was actually backwards, so if I reversed my path round the room, the phone rang forwards, which in turn caused other follow-on effects. There are also sections which appear to be set pieces, but upon first completion of the game, a little thought and it becomes apparent different ways of approaching events and apparitions can result in different endings (a difficult point to make without spoilers!). 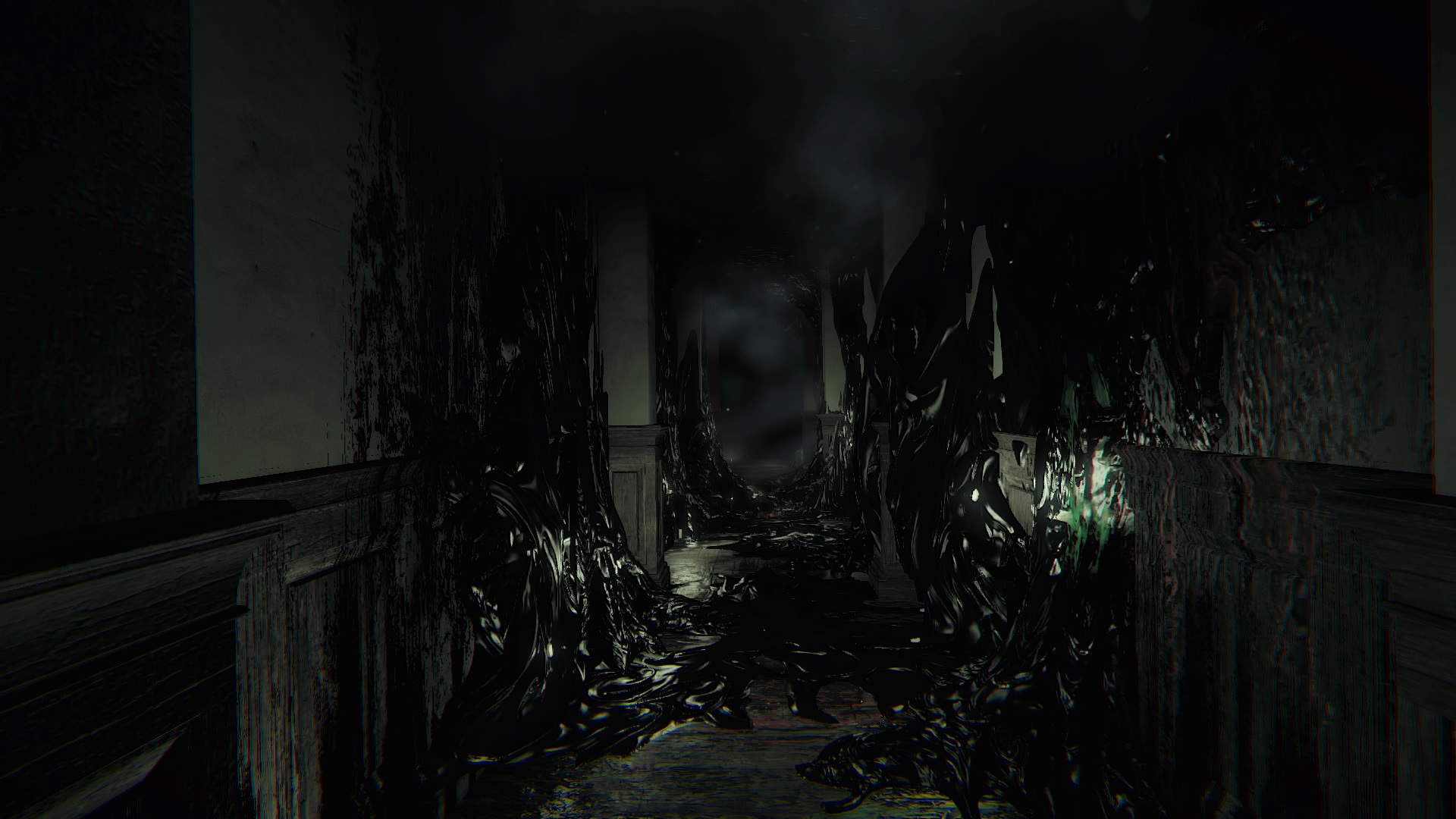 Upon reflection, he concluded Demonic Misery Black may have been the wrong choice of colour for the granny-annex.

Considering the creativity of the approach and the subtlety of the execution of many of the design points, there are unfortunately, as noted, some clumsy parts, most notably around the use of stock horror imagery and tropes. The Dorian Gray quotation at the start is not really needed to tell us this is an exploration of the artist, and the creepy doll and child’s drawings of the deteriorating family life don’t really add anything to the story or the view of the artist’s mind. The game is much better when it is doing its own thing. It is also a little brief. Although it is better to tell the story you have to tell than outstay your welcome with padding, and there is replay value, still potential buyers should be aware. If you’re in the mood for a disturbing yet very thoughtful story driven experience, then this is definitely for you.

8
Summary: A brief but compelling horror story presented in a creatively designed experience. Thought provoking, inferred not explicitly stated, with an effectively unpleasant undertone. Strange key mapping choices on consoles but otherwise fit for purpose. This is a game about exploration and your choices of where to go.
Story & Setting (8.5)
Gameplay (7)
Design (8)
Replayability (7)
Pricepoint (7.5)