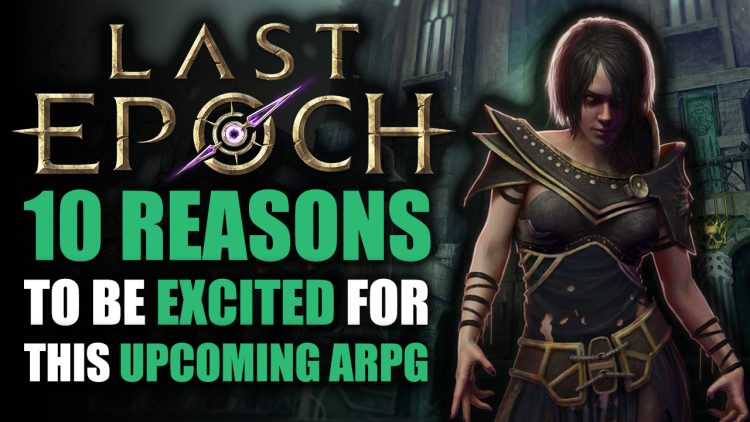 Last Epoch is an upcoming ARPG being developed by Eleventh Hour Games. It is both familiar, yet unique in many ways and should be one to watch for fans of the genre. Currently in Early Access, we go over what we’re most looking forward to about the game in our 10 Reasons article.

Last Epoch: 10 Reasons to be Excited for this Upcoming ARPG

The ARPG genre is quite the crowded one at the moment. Players have a ton of options to choose from, ranging from classics such as Diablo 2, Grim Dawn, or even newer entries like The Ascent. The genre’s gameplay is also quite timeless, with its high adrenaline action, loot pinata enemies, and in-depth character customization. 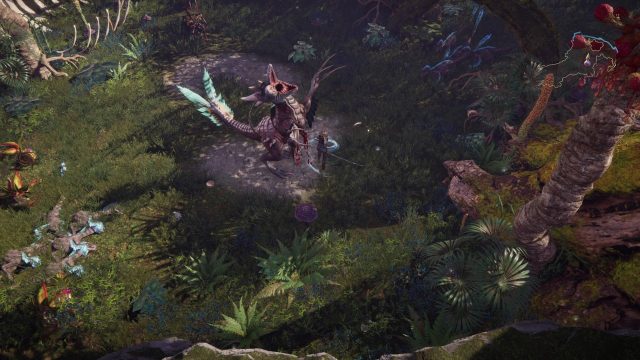 So how does one stand out? Well, Eleventh Hour Games has been hard at work on their latest project, Last Epoch. This title has been in Early Access for quite some time already, and a lot of people have it on their radar. We even tried it a couple of years ago but thought it was time for a refresher on some of the finer points of what this Action-RPG has to offer.

For those who haven’t heard of it, here are 10 reasons why should be excited for Last Epoch, in no particular order.

Last Epoch follows the familiar and exciting formula of clicking monsters with attacks and spells, then watching them die in satisfying explosions of loot. Combat is a delightful experience as skills and abilities all have destructive weight and effects, creating a beautiful dance of death. 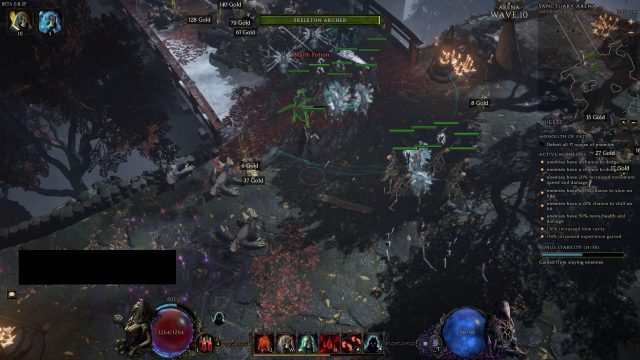 The game has a faster pace than the classics such as Diablo II: Resurrected or Torchlight. However, this doesn’t mean that the character zips and rushes around the screen-clearing waves of enemies at the click of a single button. Last Epoch’s Gameplay is slower than Path of Exile or Diablo III. Movement skills are essential for repositioning but aren’t the focus of the gameplay in the slightest.

Last Epoch is a game that will have endless replayability, and that starts at the class selection. Upon starting the game, players will be given the choice between 5 different main classes: the Acolyte, Sentinel, Rogue, Mage, and Primalist. Each of these is already visually and thematically different. 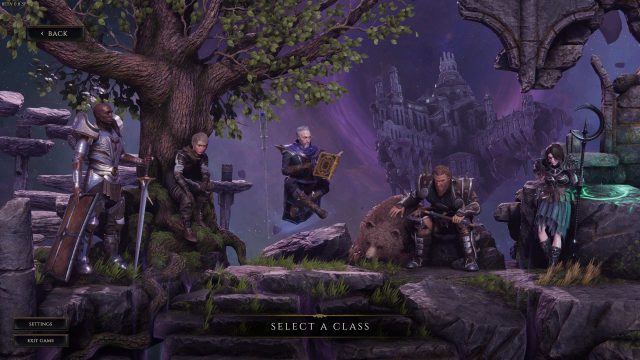 The Classes of Last Epoch

The unique thing about Last Epoch is that these 5 base classes can further specialize into one of three mastery classes.

For example, the Acolyte is your typical undead, poison, and bone type mage. However, Acolytes can evolve into the powerful, poisonous Lich, a summoner Necromancer, or even a Warlock. The Primalist can become a shapeshifting Druid, a Shaman, the master of the elements, or even a Beastmaster who commands legions of wolves and other forest creatures. 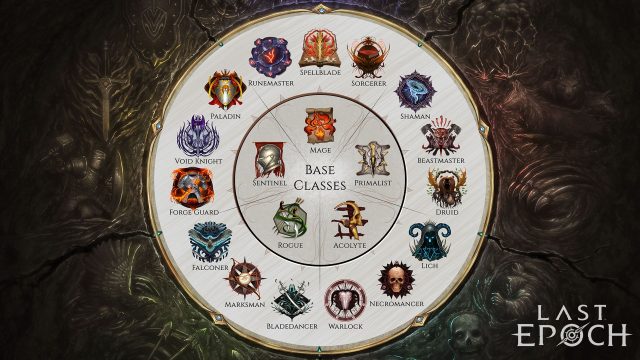 All Classes and Mastery Classes

All of the basic classes have a few passive skills to choose from to create a stable base to build upon your character. The Mastery Classes also introduce more and more passives to further create a specialized build. 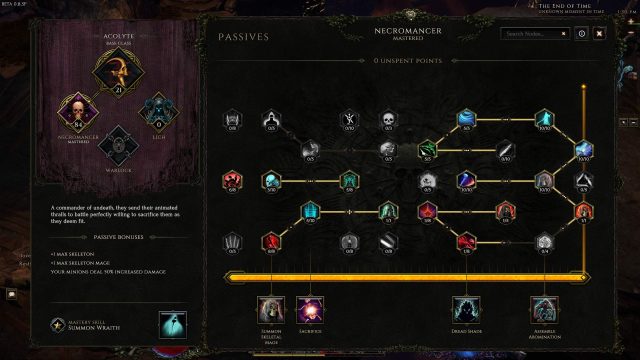 Each and every player is sure to find at least something that interests them, and have fun for dozens of hours in the process.

All Skills Have Their Own Skill Tree

Character customization in Last Epoch goes even further than your class and subclass choice. In total, the game boasts over 100 skills spread across all the character classes.

Interestingly, each individual skill gains experience if the player chooses to specialize and focus on them. This unlocks a separate Skill Tree specific to that skill, allowing players to modify their abilities in hundreds of different ways. 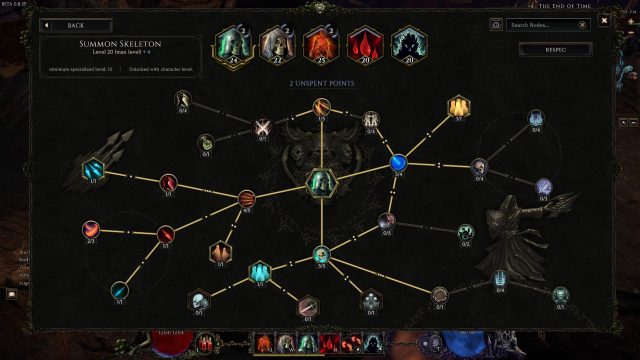 A Complex Web of Passives

Each Skill Tree’s nodes can enhance the skill, ranging from increasing damage, reducing cooldown, or changing them entirely.

For example, instead of summoning 5 Skeleton Mages, you can specialize in summoning one gigantic Arch Mage instead that has the power of all 5 combined into one minion. The Mage’s Black Hole is a powerful skill that pulls enemies towards its center. It can be trained to automatically move towards your enemies, or even change into two giant stars that orbit each other, dealing fire and cold damage. 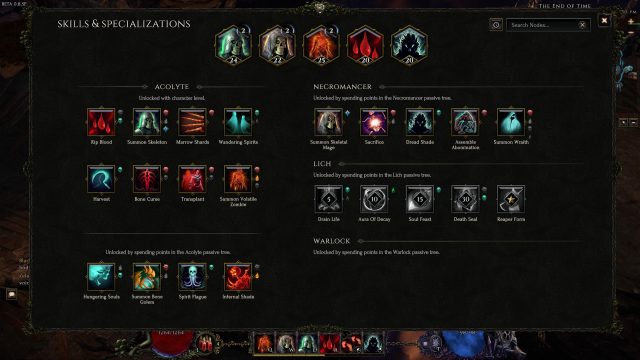 The Acolyte’s Skills. Each and every one of them has its own passive skill tree.

Don’t be afraid to experiment and try out different options. The game has a very forgiving Respec feature wherein they can reset all their passives as well as skill trees. Mastery Class is the only thing that is set in stone in Last Epoch.

Crafting in Last Epoch works a bit differently than other games. Instead of making items from scratch, players should be on the lookout for good “Base” items that are of the type and quality that they want.

Players can then enhance these base items with various Suffixes and Prefixes from Shards that have a plethora of effects, such as adding stats, enhancing defenses, or even increasing damage. 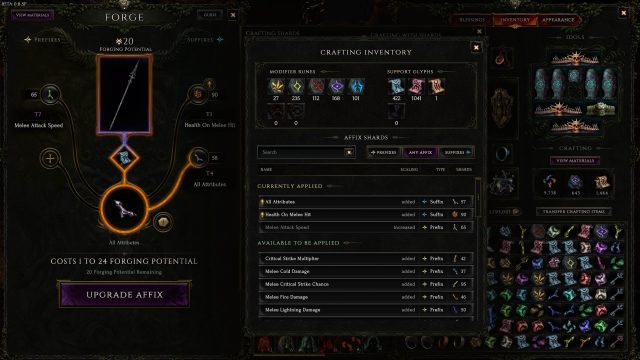 Crafting used to be highly dependent on RNG, as bad luck could break an item or prevent it from being enhanced further. The new system now involves a “Forging Potential” stat that determines how many times an item can be upgraded further.

All Loot is Useful

All items in Last Epoch have some use in the grand scheme of things, which is different than most ARPGs. In most other in the genre, players stop paying attention to “white” or “blue” items that drop as they lose relevancy, fast. 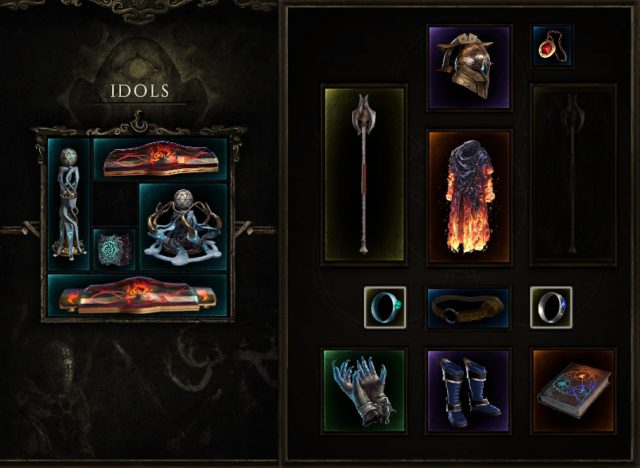 Items in Last Epoch are split into various tiers, from Normal, Magic, Rare, Exalted, Set, Unique, and Legendary. Magic, Rare, and Exalted items can all be broken down into Shards that can be used for item crafting making them sought after if there’s a particular modifier that you’re chasing after. 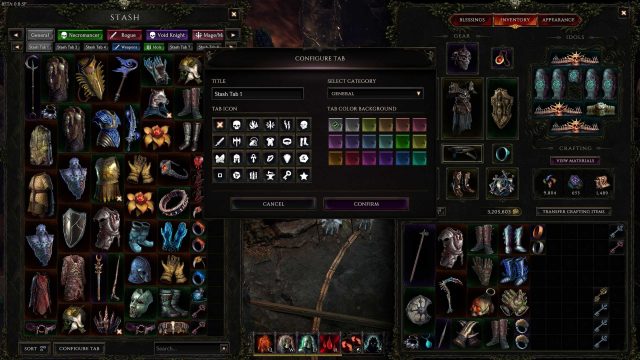 In addition to this, the lower the tier of the item, the higher the forging potential it has. So picking up those white items isn’t such a bad idea anymore?

Last Epoch’s stash system is also mind-bogglingly expansive. Pack rats should feel right at home with nearly limitless stash tabs and sub-tabs. Each tab can also be colored and have special icons placed on them to help make categorization a breeze.

We did say that “all loot is useful”, but do you really want to see all the loot on the ground all the time? As satisfying as piles and piles of items after a boss fight is, it does get old if done over 40 hours, or more. Sorting things can get tedious after a while. 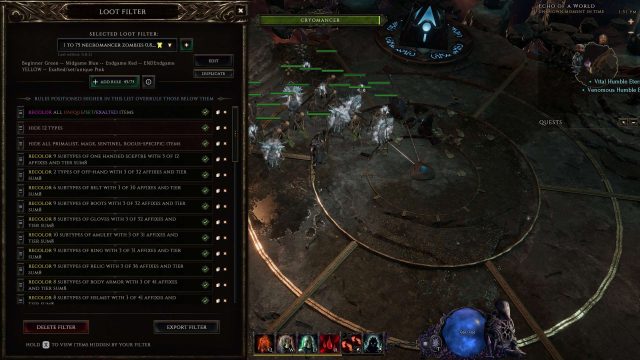 To combat this, Last Epoch has a built-in loot filter that players can easily tweak to suit their needs. The game can automatically hide unwanted items that fit certain criteria, like hiding all bow or sword-type items when playing a mage. You can also highlight or change the color of items with Affixes that you need, creating a large “PICK ME UP” signal. 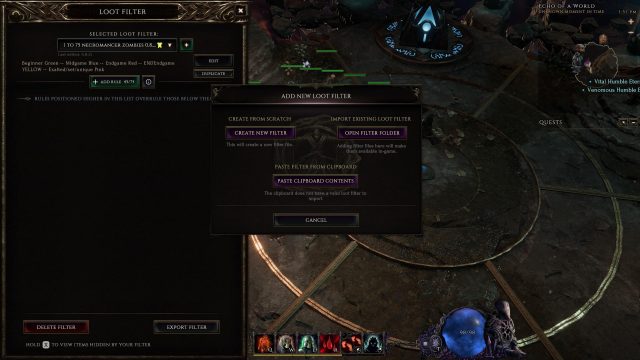 Copy Other People’s Filters with the Click of a Button!

Last Epoch’s Loot Filter is highly sharable. You can look up someone’s build guide, and find that they’ve created the perfect filter to apply to only pick up relevant gear to that build. Importing filters is as easy as copying the info and pasting it into the Importer.

Last Epoch’s story relies on a tried and tested trope: time travel. However, the way that Eleventh Hour Games implements this nifty feature definitely isn’t a gimmick. Players will explore the world of Eterra many times throughout its history. 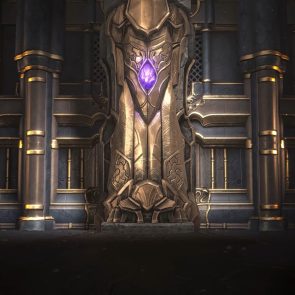 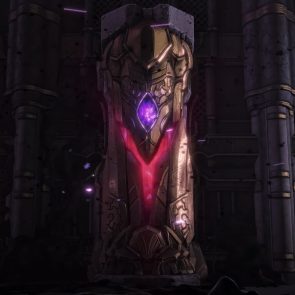 …But Look at it Now

Players will often revisit the same spot at different points of time. You may visit a city at the height of its power, in all its glory and majesty. Jump forward a few hundreds of years and you can see that the same city has now fallen and lies quietly in ruin. Move back a thousand years and you can find out that the town was built originally due to a prosperous lake in its center, though now it is inhabited by dinosaurs instead of man. 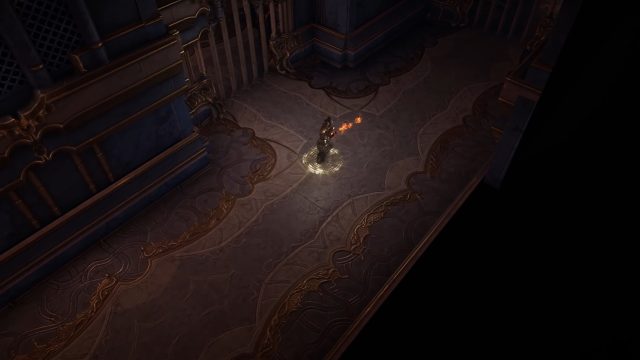 One of the endgame dungeons, the Temporal Sanctum, even uses the time travel mechanic to its fullest. Players can move forward and backward in time whenever an obstacle impedes their progress. They will see passageways that existed in the past that are no longer there in the future and vice versa. 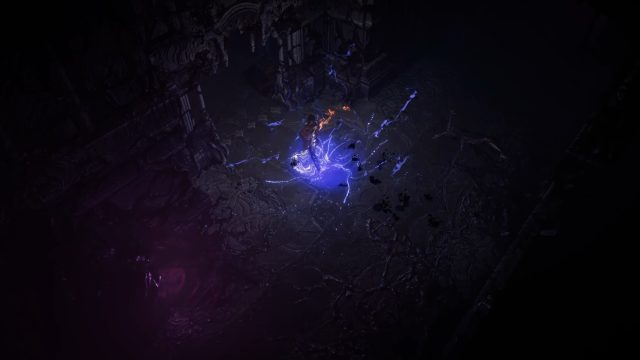 Even the boss of the Temporal Sanctum is known to possess the power of time manipulation. How she will use this against the player is anyone’s guess at this point.

One of Last Epoch’s Endgame activities is called the “Monolith System”. It is a rather charming system wherein the player goes through existing areas but with randomized enemies and objectives. 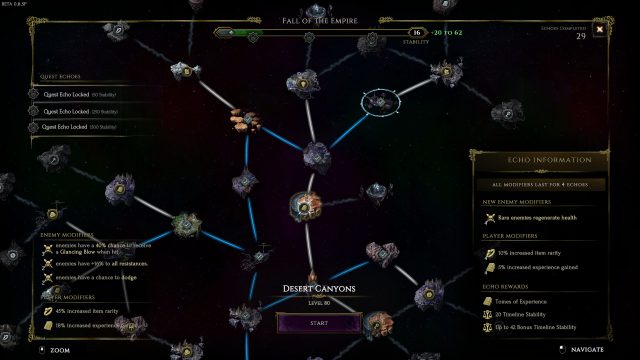 Players can “choose their own adventure” with the Monolith System, so to speak. They are presented with a web of nodes that give people an idea of what exactly they will get at the end. Do you want to have a guaranteed Set or Unique item at the end of a dungeon? Do you want gold or Shards? Be sure to look for the correct icon in the Monoliths.

Last Epoch is still far from complete, but the systems already implemented are quite good, as we’ve alluded to above. Some classes still haven’t been implemented, such as the Warlock or Falconer. 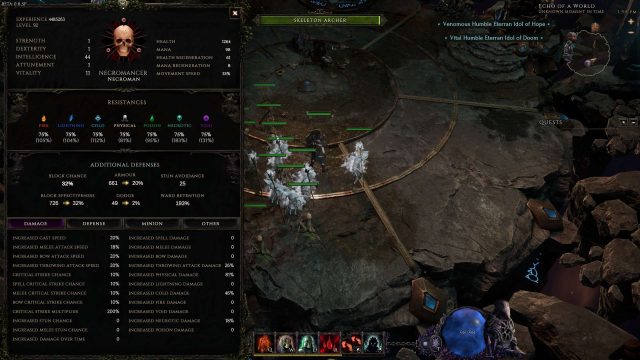 All the Stats that You Could Ever Want

However, the developers are still quite active on Social Media and the official Discord server. They have been giving players a steady stream of updates. So much, in fact, that the current iteration of the game is vastly different from what it was a year ago.

The team at Eleventh Hour Games are also aware of many current pain points for the player base, such as performance issues or the fact that there are a limited amount of cosmetic changes when characters change armor. These will definitely be fixed and improved upon before the full release.

This brings us to our most exciting update that’s just over the horizon.

Announced last June 23 was the “Road to 0.9.0”, a preview of the next major patch update for Early Access. This patch will bring out one of the most highly anticipated features: multiplayer. 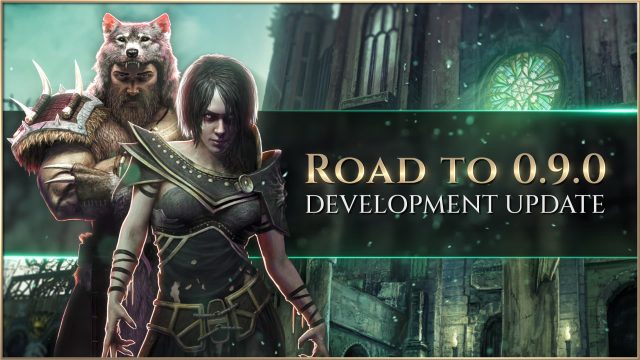 Up until this point, Last Epoch has been strictly single-player, though it did have an in-game chat system. Come patch 0.9.0, all existing systems will be fully playable. 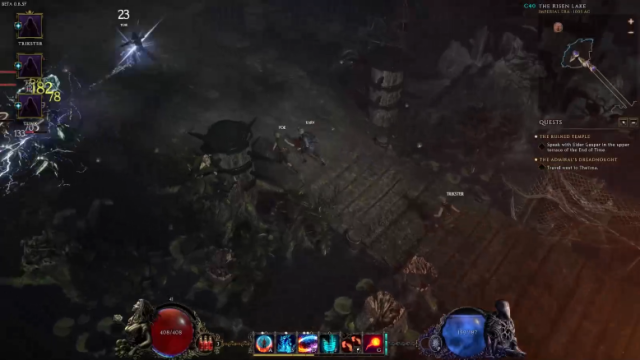 The team is quite confident that their work on the back-end, servers, and telemetry systems are up to the task of hosting persistent multiplayer characters. They want to do multiplayer right and in a way that will be good and satisfying for all players.

We’ll just have to wait a bit more till the team gives us an update on the release of Patch 0.9.0.

Last Epoch is currently out on Early Access for $34.99, a worthy price for the amount of gameplay that you get. The game has been steadily receiving content updates over the past few months, and more is on the way.

Be sure to check out our Top 10 ARPGs if you want an idea of what other great games there are in the genre (Spoiler: one of them’s Last Epoch).

For more news, check out our Weekly RPG Digest, Baldur’s Gate 3 Devs Announce Next Panel From Hell for July 7th, and Star Ocean: The Divine Force Gets October Release Date.