In this Kingdoms of Amalur Re-Reckoning Might Guide we’re going to be taking a look at Might builds, and why you might play a pure Might build or even a hybrid with Finesse or Sorcery.

First let’s take a look at the pure Might build and go down to its destiny Warlord. The bonus you get here at the end is the last stand which automatically resurrects you if you die, but your health drains until you kill an enemy. You don’t get that until you go all the way down the Might destiny tree but at the same time, I don’t like bonuses that are expecting you to fail. You should get things that prevent you from failing because they are good. This isn’t the greatest bonus ever and if you wanted to go down until reach maybe conqueror, and then spend some points in another skill tree such as Finesse or Sorcery. It probably won’t be that bad of an option. 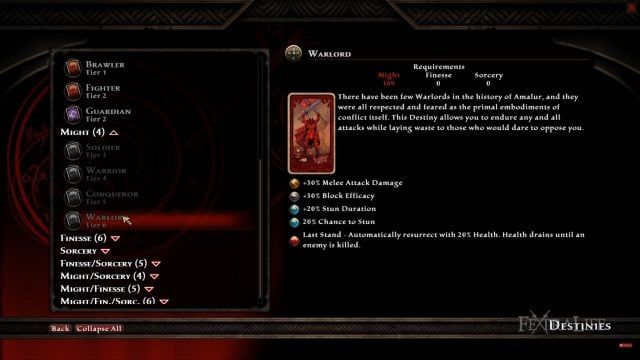 If you do go down the hybrid route, you will lose out on some melee damage block efficacy, stun duration and stun chance but it’s not a staggering amount so it shouldn’t be the end of the world. Honestly by the time you get to the last stand and you have 109 points in might, you should be good enough at the game, or have good enough equipment at the game even on the hardest difficulties that you’re not dying often. A lot of times you die from silly mistakes, so this is probably something that isn’t a must have.

That said, you might want to go for a pure Might build because you want all of its abilities. If you are planning to spend all your points there anyway because you like the abilities, and you want to upgrade everything there. That’s a fine reason to make a build, but I don’t think you should center it around this destiny at the end.

Now talking about hybrid builds, let us talk about Might-Finesse first. There are a few reasons to take this hybrid build. First you are going to add a bow into your rotation. You may have a Greatsword or your Longsword, or your Hammer. You may also want to add a ranged weapon to your secondary slot, and you want it to be a Longbow. That is a good reason as any to take Finesse. 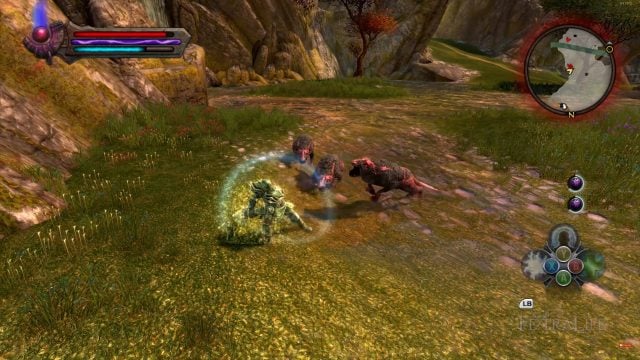 Another reason would be if you like the abilities in Might but use Faeblades or Daggers as your primary weapon. That would be another reason to go hybrid. However, you don’t need to go hybrid to do that because you can still have all the points in mind and still get those weapons types.

Lastly, if you want to add some poison and bleeds into your Might build, Finesse can make these super effective with some of its abilities and can also increase your critical damage with blade honing so there is some synergy there. There is also a nice mobility skill on lunge if you’re playing a might build that allows you to get behind an enemy. So if you are using a Greatsword for example  it can set you up for a long swing where you are not getting attacked.

Looking over the destinies of the Might/Finesse Blademaster in the last tier and the last ability it gives you +15% physical damage to the health steel and extra gold. Not the greatest ability ever, it just kind of gives you a flat damage increase and some health. So what I would strongly recommend doing is if you’re playing a Might build consider taking Slayer instead. 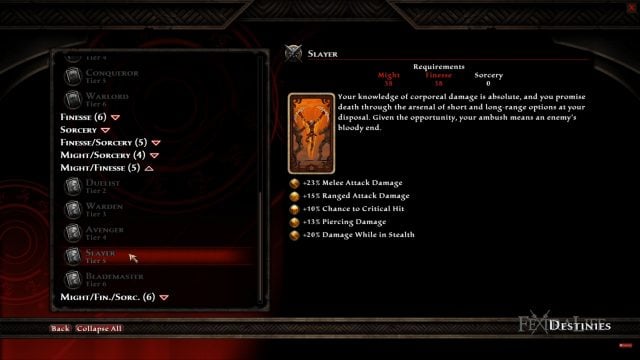 Put most of your points in Might and the rest on Finesse, in order to get the support abilities you want there. The only exception to that is if you really fell in love with the Bow and really want to use it very effectively. You are going to probably need to split in half, so you can take Blademaster because you  have to really go up the bow tree to get the juicy abilities.

Now if you’re talking about a Might-Sorcery build you’re obviously going to be taking sorcery to increase your elemental damage or to add spells to your repertoire in between your melee attacks. Maybe you weaken enemies with a big AOE spell and then you go in and finish them off. That would be the sort of playstyle you would be looking at if you are doing a might/sorcery hybrid build.

Or maybe you just want to use the sorcery weapons like Staves, Scepters or Chakrams as your secondary weapon, or even your primary weapon, but you want to have some might abilities. Lets just pretend for a moment that you are planning on playing a might based build where you are going to use a Greatsword or Hammer but you want to supplement but you want to cover that with sorcery because I would be covering the Sorcery side of that in the Sorcery build guide. 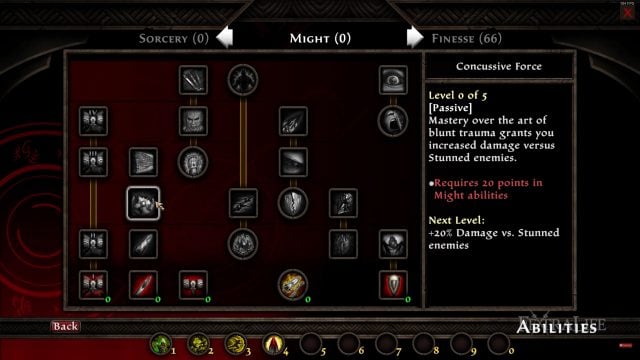 Looking at the champion destiny which is the final destiny in the Might-Sorcery line. You are going to get harmonic overload which gives you a chance projectile per kill. The chance for it to proc is not stated  or its overall damage but it is not a bad bonus because a lot of Warrior bonuses benefit you by killing enemies. For example, you are trying to kill enemies as quick as you can to be able to build damage buffs up over time, so this can help prop it forward and sort of become a self-fulfilling prophecy.

Additionally I think if you are playing a Might-Sorcery build, unless you are taking a few points in Sorcery in order to get for example some of the weapon masteries, and a maybe a couple of buffs you would probably would want to split your points heavily between Might and Sorcery because they’re just simply really good abilities on both sides, and you would probably need  at least 50 points to get all the way up to tempest, which is the top of the lightning ability line.

Probably what you are going to be looking for if you’re playing a Might build is playing with lightning. In a Might build it probably has the best synergy out of all the spell types such as ice, shock and fire. Mostly because the Storm Bolt ability has the chance to stun enemies. For Might, if you look at Concussive Force, it actually gives you more damage against stunned enemies so you might want to throw a Storm Bolt in there. Stun an enemy, run and hit him with a Greatsword, boom dead. That is such great synergy that I am currently making a build right now that revolves around that, so I will make to get that out as soon as I can but you are probably going to be looking at something like that, or casting a spell like Tempest and then going in and attacking.

Looking over the destinies I think probably pure Might or Might-Sorcery are the strongest here. As soon as you hit conqueror in the might line you get a 17% chance to stun. That is absolutely insane, you go from 0% chance to 17% from Warrior to Conqueror. If you max this out and get five points into it and then get two extra from like gear or whatever bonus you get seven points which is as high as it goes. Then you would be getting 80% increased damage against stun targets and you have a 20% chance to stun them. That’s on top of you know every other ability that you use, stuns them which is insane. I think that is a huge amount of damage, and what I think about Sorcery (which is besides the fact it synergizes really well with stunning which I mentioned before), is that it gives some AOE effectiveness. 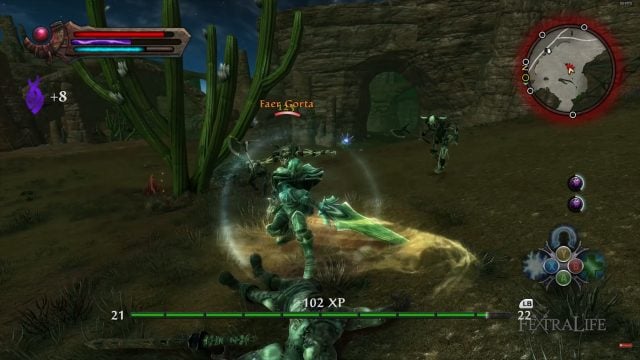 You can still get some AOEs if you are using a Greatsword because one of the abilities allows you to whirlwind but I think this gives you a little more versatility. At range you can AOE things a bit more easier while you can still do that with Finesse, you wouldn’t take a lot of investment into bow in order to get there, and I think you can get an AOE a lot easier, earlier in the magic skill line.

Stay tuned for more Kingdoms of Amalur: Re-Reckoning content as we explore what sort of Builds you can make in this high fantasy action RPG Remastered. You can also check out our our Getting Started Tips: Things I Wish I Knew Before I Played beginner tips. If you need help or have questions about the game, be sure to stop by our Twitch channel and ask, or check out our Kingdoms of Amalur: Re-Reckoning Wiki!