In this Kingdoms of Amalur Re-Reckoning Guide we would be looking at finesse builds. How to make a pure finesse build, Hybrid builds and having general discussion on the sort of builds you can make out of finesse. I’ll be getting to more specific builds guides later on but for now i want to look at the basics and direction if you want to make a Finesse build. 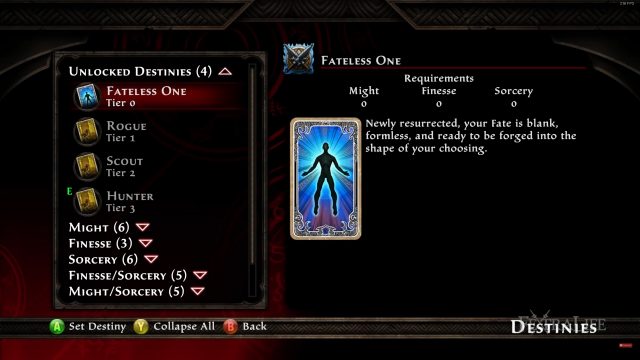 You will also notice going through these Destinies that you have a lot more bonuses to range damage attack, so range attack becomes the preferred source of damage if you are doing a pure finesse build. So if you want to do a melee attack as finesse build you would take a hybrid build.

Just taking a look on the Finesse-Might you will see immediately a +25% melee attack damage and +20% range damage. This is -10% ranged attack for 25% melee damage, you have the same critical chance, -5% less pierce damage and increased +25% damage for stealth. So if you want to play stealth based build this is going to be a better pick than the pure finesse route. Lastly Cutthroat that overall gives +25% physical damage as a whole. This build is a much better bet if you want to mix melee and range while pure finesse is more in the range department. 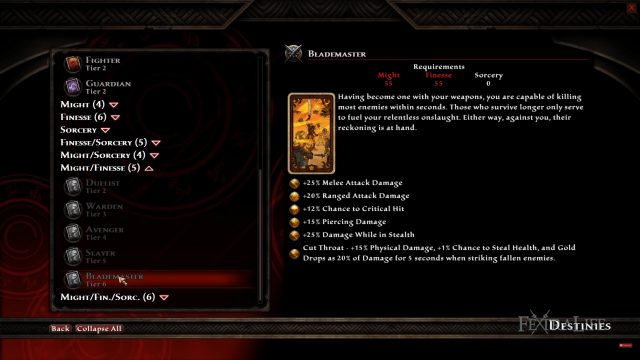 If you look at the Finesse abilities you will notice there will be a lot of them that benefit the longbow. So one of your weapons with Finesse would primarily be the longbow. It is going to be a waste if it isn’t because you would have to spend a lot of points to get up the tiers which some of those would end up as longbows so if you are not using one you would be wasting 20-30 points into longbow. When you try to make a melee hybrid build, you would notice Blade Honing gives you increased critical damage with long swords and greatswords as well. So running a hybrid finesse build you would probably run one of those four weapons. Daggers, Feyblades, Longswords and Greatswords in order to take best advantage on that. 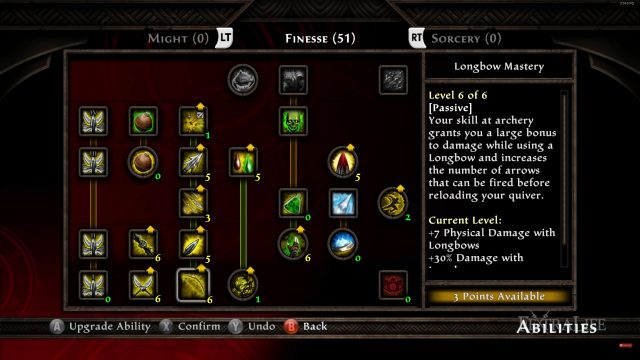 And in venom weapons it also says it applies to bladed weapons but because blade honing already works with that you are gonna use the poison from that and the added critical bonus on one of those four weapons types.

The general concept when playing a pure Finesse build is that you’re going to try and stack poisons and bleeds on enemies. Then use melee for finishing blows and or pick them off with your bow. Depending on what the scenario is you actually get some benefits later in the game that increase your poison and bleed damage so you’re always going to make sure you want to have poison and bleed on your targets especially if they’re hard to kill targets and also once you get execution this is going to allow you to gain bonus damage against targets that has bleeding and poison on them. So you are going to always minimally want to make sure they have bleeding but poison helps as well so if you can get like multiple DOTS on these guys so they are going down faster. That’s kind of the strategy that you could do with a bow or with melee weapons. 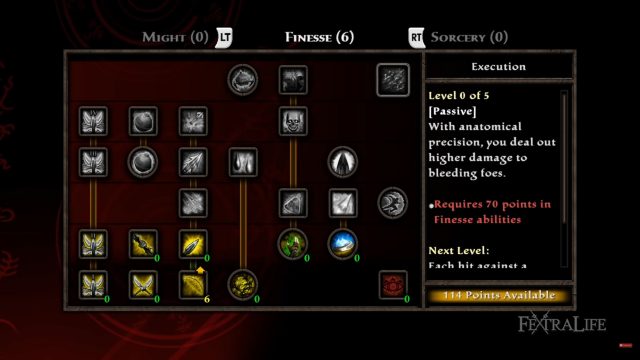 One of the builds I’m working on right now is actually taking the Assassin destiny instead of Nightblade and then putting a bunch of points into might as well. This is because the evasion chance of 17% or 11% depending whether you’ve got that twist of fate or not which is RNG based and you don’t know when or how often it’s going to happen. So if you are gonna have a lot of you’re gonna have like 33 extra points in might to put however you want. That means you could use a different weapon type  if you want or you can get some bonuses to health or you can take like adrenaline so you can get some more crit chance there, just a lot of things you can do there.

Additionally another nice combo with might is concussive force which gives you increased damage against stunned enemies and because you can set stunning with the trap in the finesse line or you can do it with the one of the endgame skills that makes it, so that you can use poison abilities on an enemy you have a chance to set stunned. This works very well so if you get stunned very easily and then you can deal increased damage, upping your damage output now.

If you’re talking about hybriding with Sorcery what your probable main goal to do here would be either to add elemental damage. Maybe an increased elemental damage to your bow. It might be adding shock or fire on it for increased damage or if you want to play a full range build so you’re going to take like a Staff, Sceptre,  Chakram and or a Longbow. In which you are  just gonna use both of these and stay at range the entire time. And i think you can make a similar build with the assassin setup but instead of putting in might and going into Sorcery. 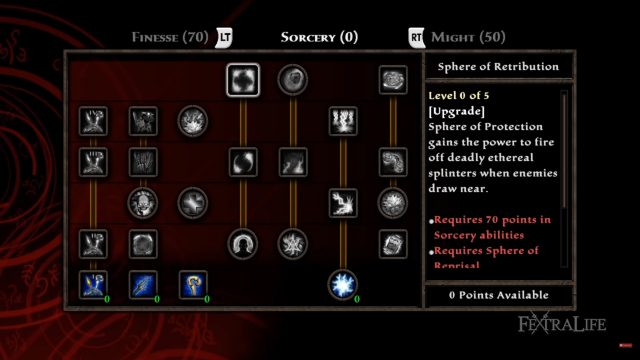 But generally speaking if you are going to multiclass with Sorcery and Finesse, or hybrid whatever you want to call it. You would probably be better off going mostly Sorcery and less Finesse because some of the spells are at the end and you have to put a lot of points unnecessarily if you are running a finesse build in order to get things unlocked that you need and you just won’t have that many points if you do it coming from a finesse build. 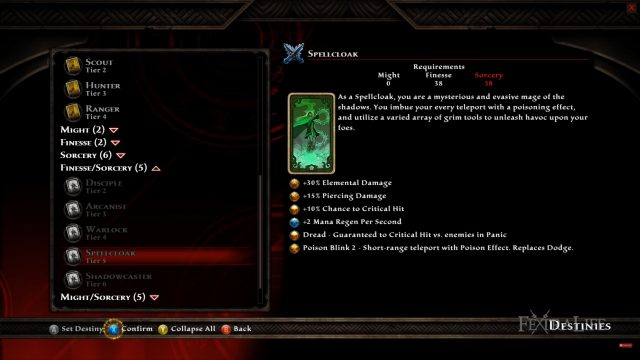 Also if you don’t want to use Assassin for that sort of build the Spellcloak is a very good choice. Which is going to increase your elemental damage and piercing damage with bows and also Feyblades in them as well. It gives you crit chance and mana restore. It also allows you to guarantee a crit chance against enemies that are panicked. Enemies can be panicked when they are set on fire  so there is nice synergy there with fire spells. Again the problem is getting enough points into sorcery in order to boost your fire damage so that it becomes useful to try and set enemies on fire.

I think the Spellcloak destiny is a lot better if you’re planning on using Sceptres for your other weapons because they consume mana to use them and that’s going to give you the extra mana regeneration that you probably wouldn’t otherwise need if you’re not using Sceptres. Like Chakrams and bows for a range build. You are not really going to consume much mana and throw a lot of spells. If you primarily go Finesse and just try to work around the Finesse abilities and add some Sorcery . You are just going to boost your elemental damage and maybe couple buffs.

One thing I mention particularly with Finesse builds especially if you’re using a Longbow when gaining the Scattershot ability your damage absolutely increases by an astronomical amount. If you can get point blank on an enemy doing absolutely damage. You should be using your charge shot all throughout the game even before you get a Scattershot because when you charge shot (where you hold and shoot until it charges up and fires) it is very very powerful, and it’s a much better way to use arrows. 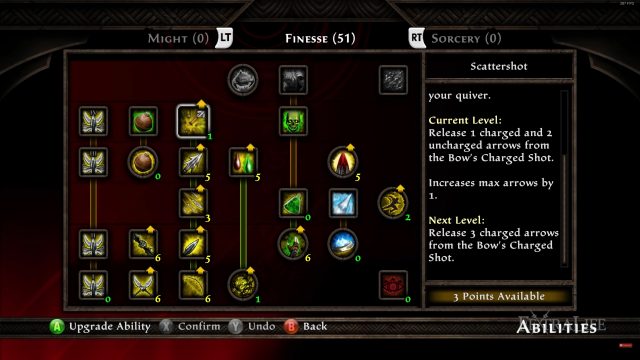 Generally you would be able to get the spacing in most fights to use it well. But it just deals a ton of damage and once you get Scattershot and learning to use it effectively is a huge part of playing a finesse build especially if you are using a bow again because not only if you hit something at point blank it would probably be dead in one or two shots but also you can move the target that you’re aiming at and maybe let’s say you sidestep to your right a little bit and then another enemy gets in front of you. Now you are hitting the guy behind it at the same time. So learning your footwork on where  to position with scattershot can really up your DPS skill.

Stay tuned for more Kingdoms of Amalur: Re-Reckoning content as we explore what sort of Builds you can make in this high fantasy action RPG Remastered. You can also check out our our Getting Started Tips: Things I Wish I Knew Before I Played beginner tips. If you need help or have questions about the game, be sure to stop by our Twitch channel and ask, or check out our Kingdoms of Amalur: Re-Reckoning Wiki!