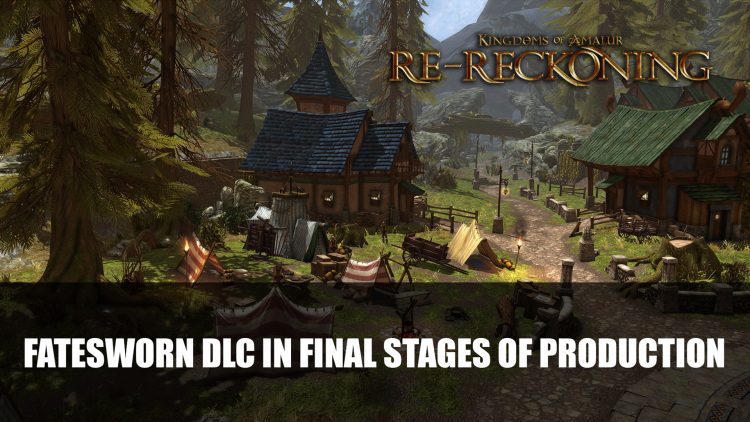 Developers of Kingdoms of Amalur: Re-Reckoning have revealed the first look at the new DLC Fatesworn which is now in the “final stages of production”.

Kingdoms of Amalur: Re-Reckoning‘s DLC Fatesworn is in the “final stages of production” according to the official twitter account. A post on Steam shares the first look at the new DLC with an image of Gale Crossing.

Gale Crossing is described as part of the trade route on Sative Road according to the official description:

Centuries ago, Gale Crossing was an integral stop on the bustling trade route known as the Sativa Road, a treacherous passage over the mountains that brought wealth and industry to a region once considered unlivable. But all good things must come to an end. After series of catastrophic foreign wars, the price of Sativa Fiber dropped dramatically, devastating the Sativa industry and gutting the region’s importance as a source of this once-valuable reagent. Despite these tragedies, Gale Crossing remains a crucial junction for travelers hoping to pass safely through the Eldrith Mountains.

After the fall of the Sativa Road, residents of Gale Crossing continued to rely on outsiders for their survival. Courageous travelers and merchants still hoped to pass through the mountains as a more direct alternative to shipping by sea, but the vast infrastructure for such treks began to disintegrate quickly without attention and maintenance. High Sativa prices had driven the boom times, funding improvements along the trade route, supplying Gale Crossing and smaller camps with the equipment to support travelers and their teams. Without this money, the mountain passes soon returned to their natural state, deadly and impassable.

Last we heard about Kingdom’s of Amalur: Re-Reckoning Fatesworn which is a new expansion set to release for the remaster this year 2021. The DLC which is described to include 5+ hours of gameplay according to the Epic Games Store, but little else was shared. The game received a patch in June this year which added 4K to Playstation 5.

It’s been a long time coming, but we’re finally ready to give you a peek behind the curtain of #ReReckoning’s upcoming DLC.

Wrapping up the final stages of production, we’d like to share a preview of Fatesworn. Introducing: Gale Crossing!

Currently, there is no set release date for Fatesworn but it does look like we’re getting closer to finding out when with this announcement.

If you’re diving into Kingdoms of Amalur: Re-Reckoning be sure to check out our Kingdoms Of Amalur Re-Reckoning Getting Started Tips.

One comment on “Kingdoms of Amalur: Re-Reckoning Fatesworn DLC In Final Stages of Production”