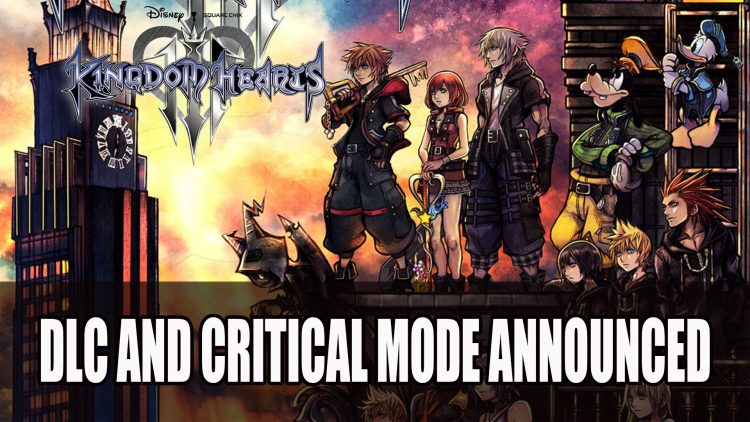 In an interview with the Japanese website Dengki Online, Kingdom Hearts 3 Direct Tetsuya Nomura reveals that a paid DLC will be coming at the end of this year.

Some key points to take from interview include that the sales for Kingdom Hearts III has surpassed the expectations of Square Enix and even Nomura himself. Kingdom Hearts 3 gained the top spot for January sales in the US. Both Nomura and his team are working hard on the KH3 DLC but he is not losing sleep for its completion.

Critical Mode will be coming soon, but it won’t be an artificial difficulty level which makes enemies deal higher damage, it will actually include a lot of changes and has been described as “fun like only Critical mode can be”.

Nomura has also solidified the fact that Kingdom Hearts 3 will not have a Final Mix version like others in the series, but instead gain new additions that will be coming in the form of DLCs. There will be free DLCs and paid DLCs. Free DLCs will be released now and again, but the purchasable DLC will come in a pack. The aim for the KH3 team is to complete the DLCs before the end of 2019 and to start working on the next game. But it looks like Nomura has a busy year ahead, with a full schedule of projects, so he has not begun to plan for the next Kingdom Hearts game.

Nomura also touched upon some of the story for Kingdom Hearts 3, readers should be wary there are some spoilers ahead:

Nomura expressed that his favourite out of the worlds in Kingdom Hearts 3 is Toy Story, it took nearly 2 years for him to complete the story of that world, and also visited Studio Pixar to ask questions.

The idea he had for Rage Form in KH3 is a very different from the Anti Form that appeared in Kingdom Hearts 2, instead of being swallowed by darkness, Sora simply releases his anger over a short period of time.

There are some questions that many fans are awaiting, for example the members of the Organisation XIII human names or how Isa received his cross-shaped scar on his forehead, so far Nomura hasn’t got a reason for that one yet. Xion has now been revived and will join Organisation XIII, this will be part of the narrative that gets explained in Kingdom Hearts 3 paid DLC.

When Nomura is asked about the “person” Lea and Isa are looking for known as the “Nameless Star”, Nomura says that players should be able to find this out from reading the game’s secret reports. The “person” has apparently already appeared in one of the previous games as well.

According to the Nomura about the secret movie that gets revealed at the end of Kingdom Hearts 3 if you collect enough Lucky Emblems, there isn’t currently enough information yet for fans to completely understand it at this point.

Kingdom Hearts 3 is now available on PS4 and Xbox One, you can check out our guides if you’re currently taking on the worlds as well as follow our trophy guide to platinum the game.

For more RPG news read next Ni No Kuni II: Revenant Kingdom DLC The Tale Of A Timeless Tome Releases This March, Dead Cells Gets Free DLC Rise Of The Giant and Sekiro New Boss Trailer Featuring The Chained Ogre.