Kingdom Come Deliverance has a unique and cryptic combat system, whereby players gain levels in various Skills, making them more effective. Just exactly how these levels effect your actual in-game character isn’t really explained, except in an extremely vague manor. In this article I will dissect and breakdown the different Weapons and Skills in hopes of filling the void.

I’d like to start out with some general combat information that may or may not be known to you. Firstly you will unlock very important techniques from training with Captain Bernard in Rattay, so it is advised you complete the main quest until you receive the quest Train Hard, Fight Easy. This will allow you to Dodge, Parry and Feint which are vitally important to the combat of the game. You can also Riposte if you block at exactly the moment your opponent swings at you, hitting for good damage and giving you an opening. 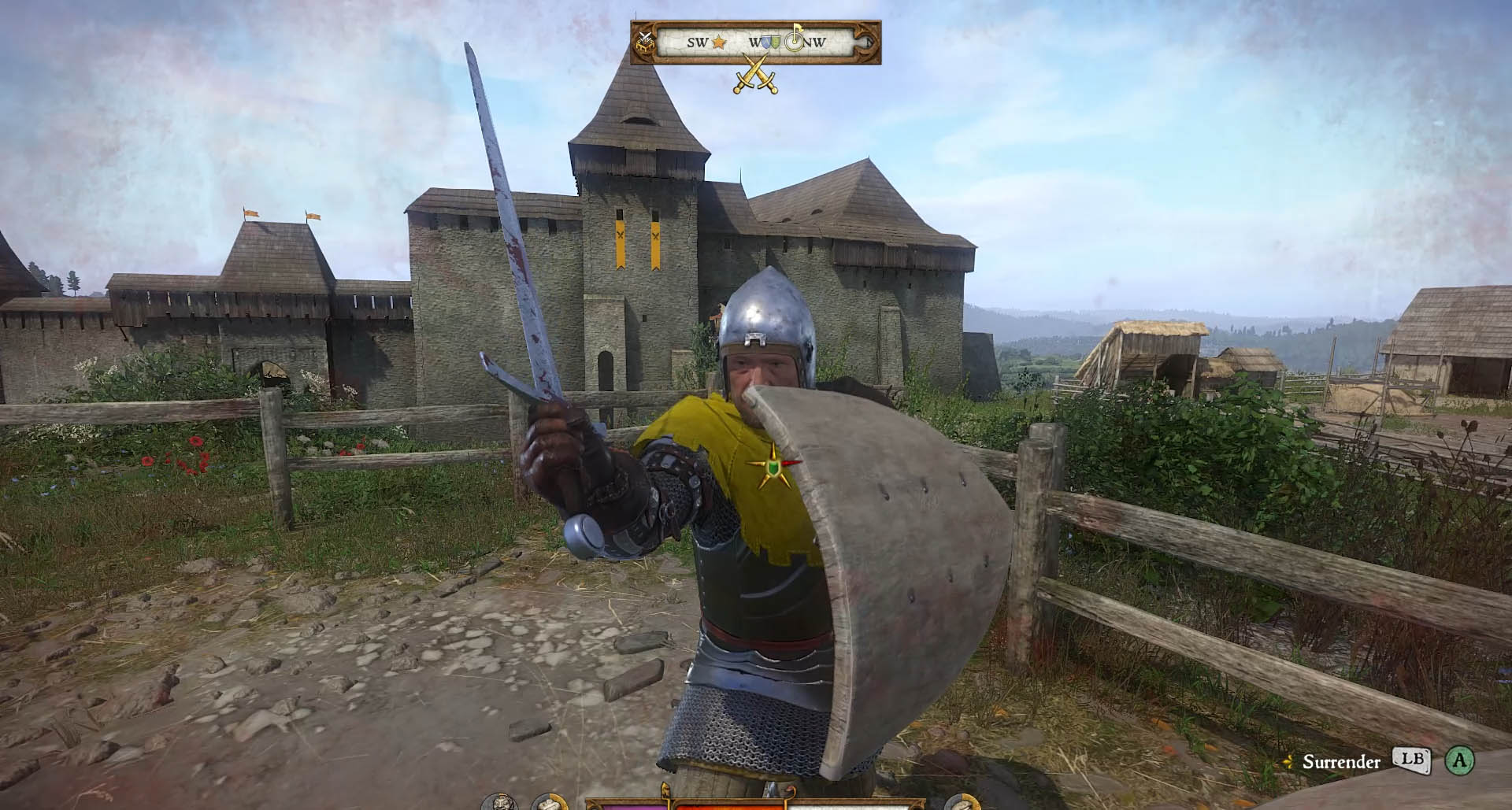 Recognizing and reacting to the green shield when your opponent attacks is a HUGE part of combat in Kingdom Come Deliverance.

Feints are executed by holding the attack button with your sword in one of the 5 directions, and letting go after you move it to another. This “fakes” out the enemy and allows you to strike more easily. These are not overly difficult to pull off, and should become a stable of combat for the would-be warrior.

Although not mentioned above, players can engage in what is called a “Clinch” by moving into an enemy while holding Block. If the player then performs any attack or kick they will attempt to push the enemy away, leaving them vulnerable for a follow up. Successful Clinches are easier to perform if you have higher Warfare, good reaction time and the perk: Clinch Master. Clinches are a great way to gain an easy opening on an enemy, but it isn’t recommended against powerful opponents who may have higher Stats than you. Note: practicing Clinches against Captain Bernard is not recommended because he will win 99% of the time, when often you would win much more against actual opponents. 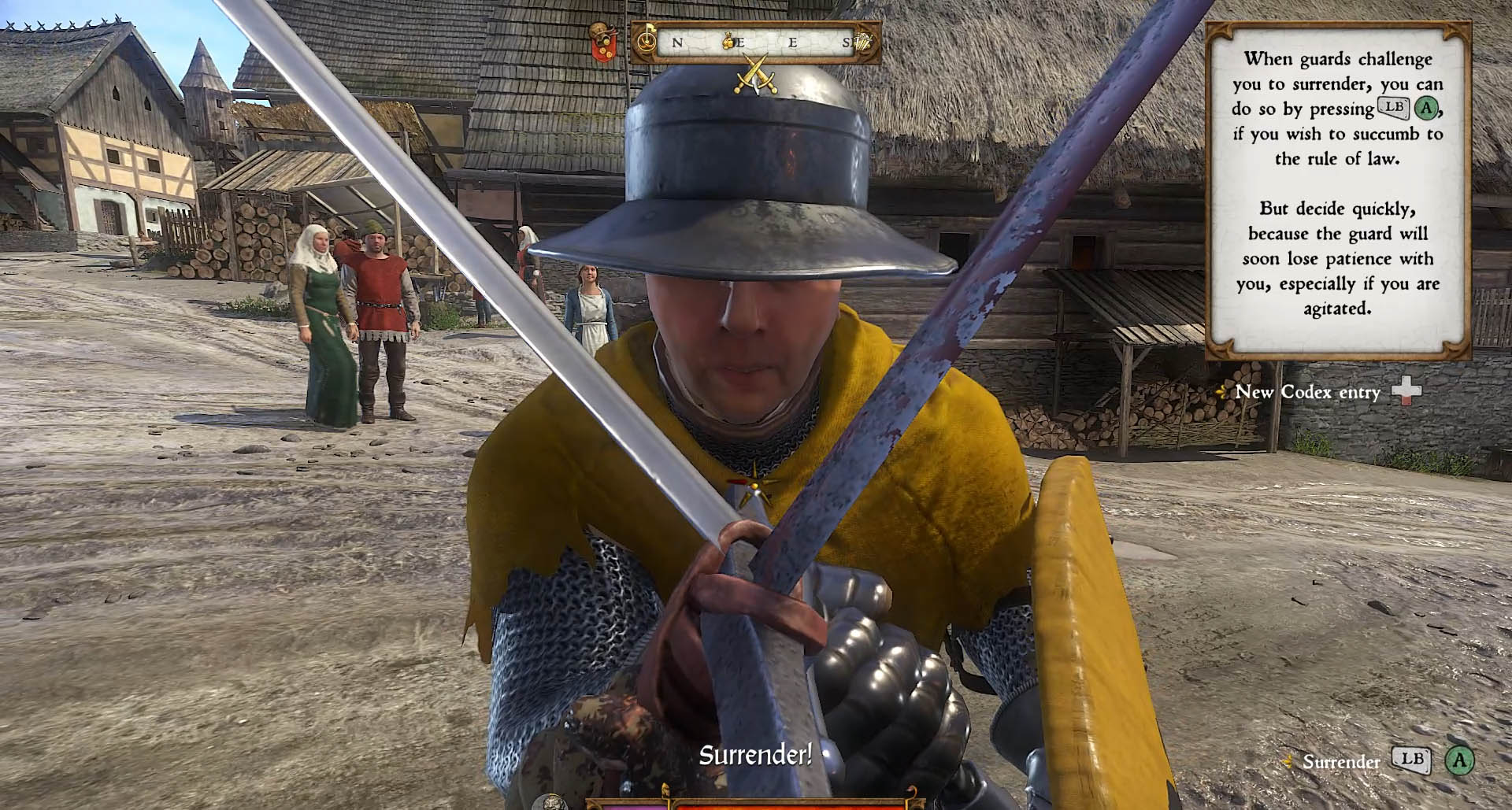 If your screen looks something like this when you move in close, or your opponent moves in close, then you can attack to win the Clinch and create an opening for an attack.

Secondly, and I’m directly quoting Warhorse here, Warfare skill determines how quick your swings are in combat. However, it is relative skill so it is compared to skill of your enemy and from that the speed is calculated. This means that when you face an enemy your Warfare skill is compared to something of theirs (I would assume Defence). and your attacks are faster or slower based on how you measure up. This is why attacking easy enemies results in more hits, and also why combat gets easier as you level your Warfare skill. The Defence skill simply determines how long the window will be for Perfect Blocks and Master Strokes.

Lastly, Stamina is very important when fighting and if you are attacked, and attempting to Block with no Stamina you will take a good amount of damage. Be sure to be fully fed and rested when entering combat because being Tired and Hungry will deplete your max Stamina. Taking damage will also reduce it, so you will become less effective the less Health you have.

Bows are affected by both Agility and the Bow skill, but only the Bow skill actually affects how much you sway when shooting. Agility either has no effect on this or it’s so small that you can’t really tell the difference. If you want to test this you can drink a Embrocation, which will increase your Agility by 5 for ten minutes, and you’ll see almost no difference in your shooting.

Neither higher or lower Bow or Agility seem to have any impact on how long it takes to draw an arrow, although it is very hard to test perfectly. I found a variance of about 1 or 2 frames faster at higher levels, but again it’s hard to get completely accurate results. Either way, it’s not enough to be significant. However, different Bows do take different time to fully draw, and some these differences can be drastic depending on the Bows compared. 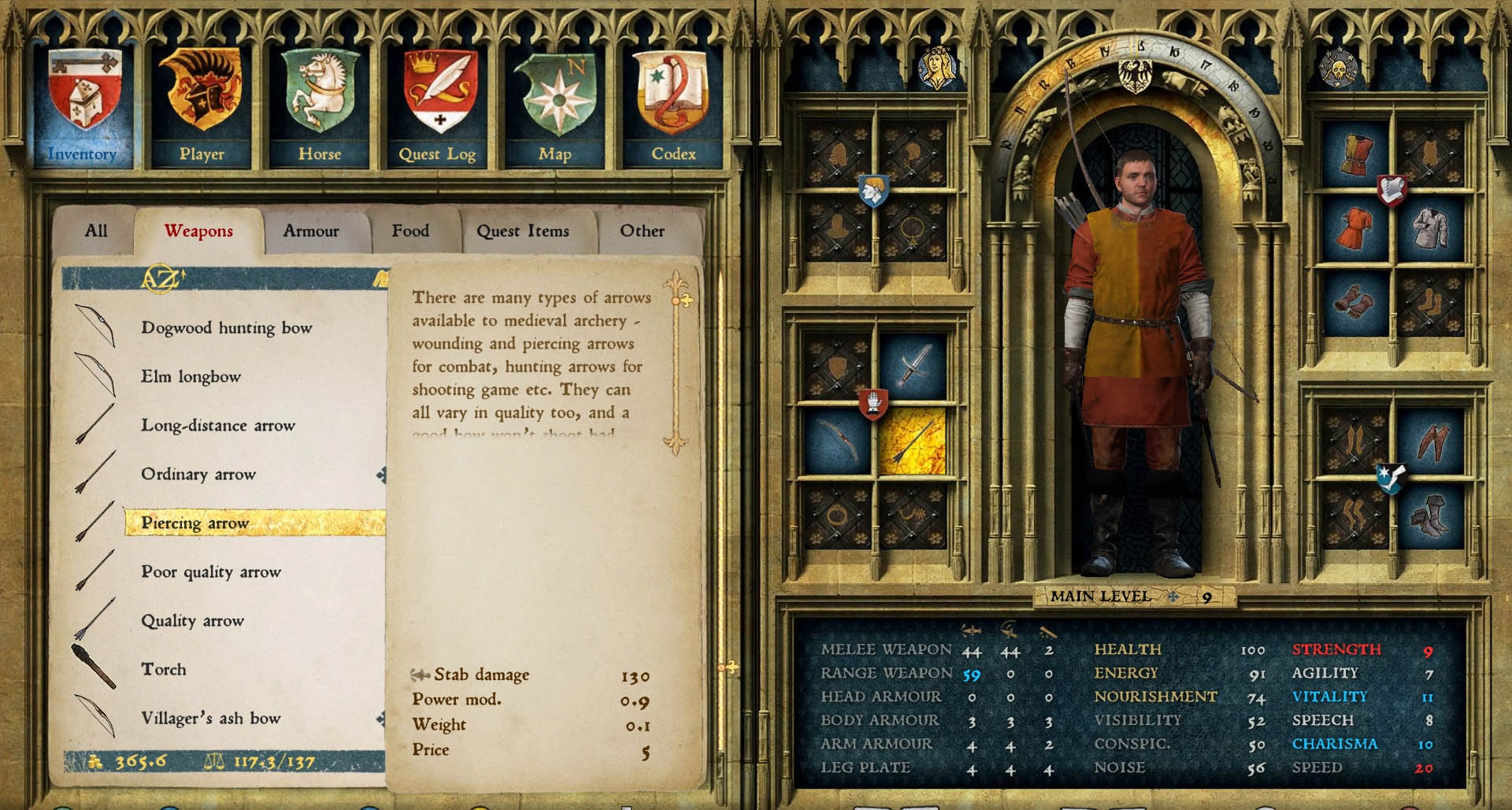 The longer you hold your arrow, the more your bow will sway, increasing the likelihood that you will miss your shot. For this reason it is advised the you fire within 1 or 2 seconds of your arrow being fully drawn in order to get best results. An arrow is fully drawn when it stops moving backwards and is still.

Shortswords, Hunting Swords and Sabres all have a faster attacks speed than Longswords do, but they have a much shorter reach. They also scale with Agility, instead of Strength, and gain damage based on this Stat. The increase varies from blade to blade per point in Agility, but is usually 1-2% more damage per point in agility above zero. An interesting thing to note here is that each weapon has it’s own scaling, much like Dark Souls, so they are not all created equal. 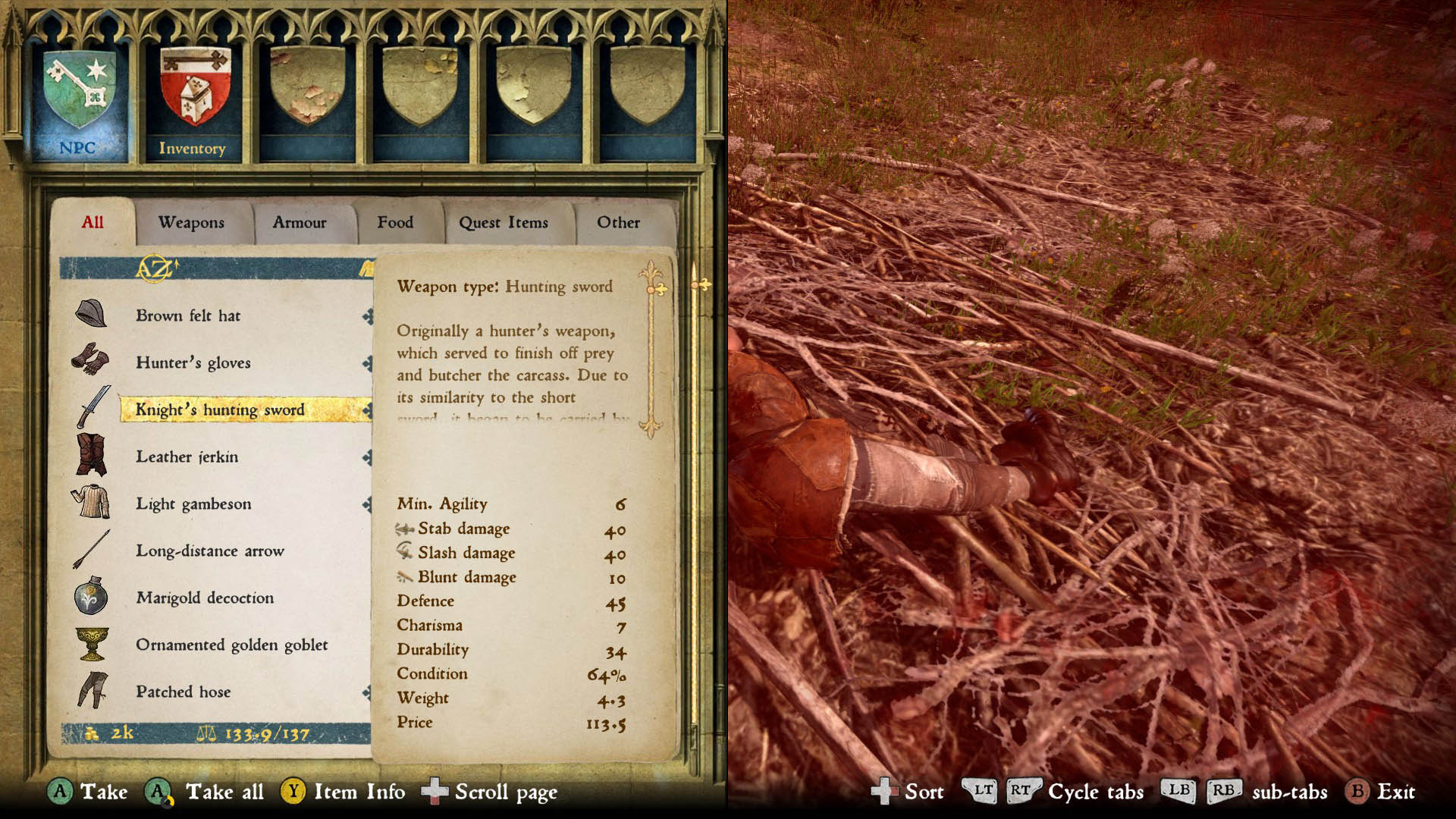 Because Shortswords, Sabres and Hunting Swords have poor defence, generally, it is recommended you use a Shield when using one.

Axes and Maces both have fewer combos than Swords, but both have their uses. Both Maces and Axes, unlike the above, scale off Strength with relatively similar scaling. You generally gain around 1-2% damage per point in Strength above zero. As with above, each weapon has it’s own scaling, so results will vary from weapon to weapon. 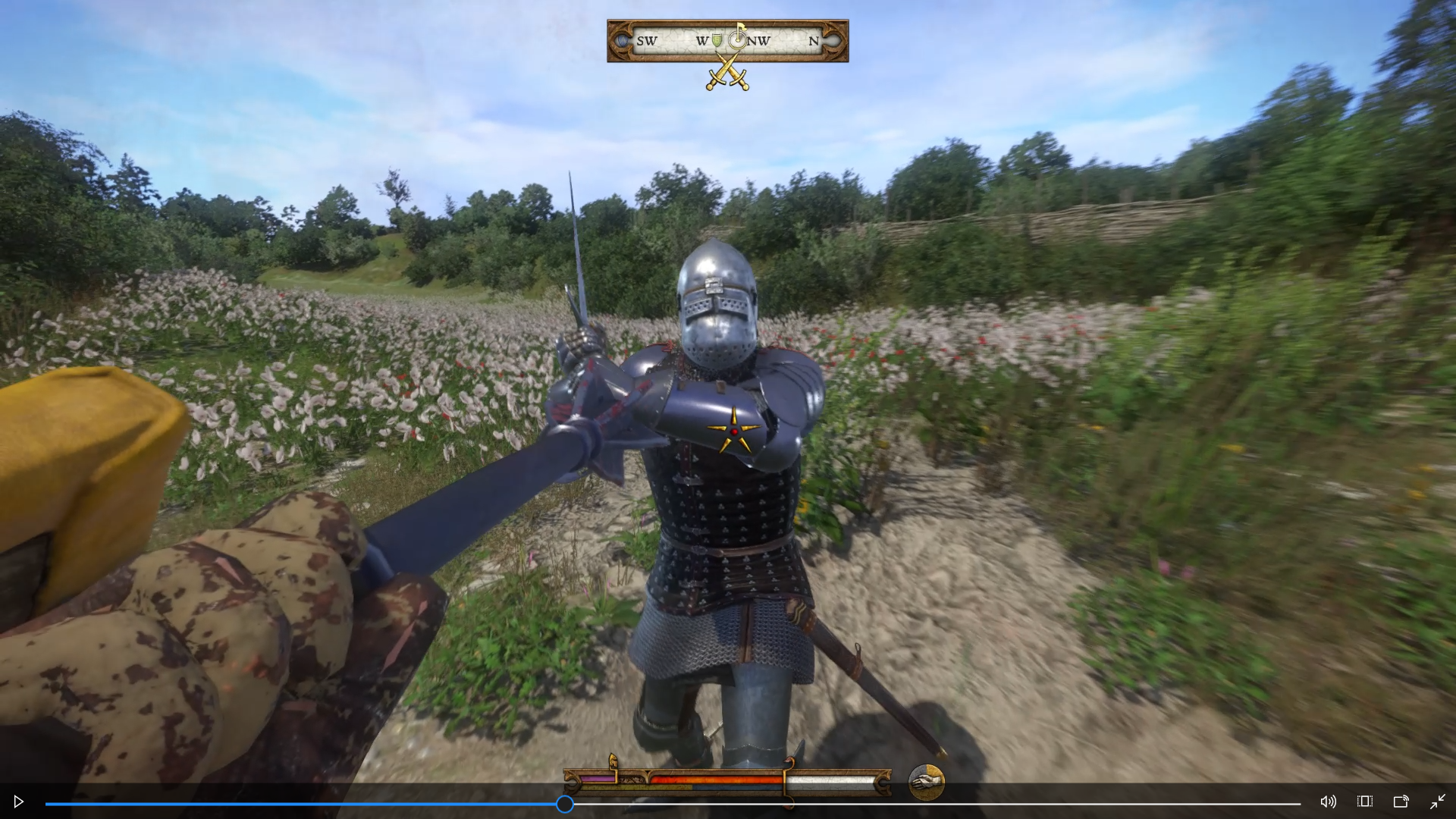 Longswords attack more slowly than the Agility-based swords, but they hit harder, have longer reach and have better Defence. They also scale off of Strength and have the best scaling of any weapon type in the game. You will gain roughly a 2-2.5% damage increase per point into Strength, which is over double that of many other weapons. As with other weapon types, the damage scaling varies from weapon to weapon. 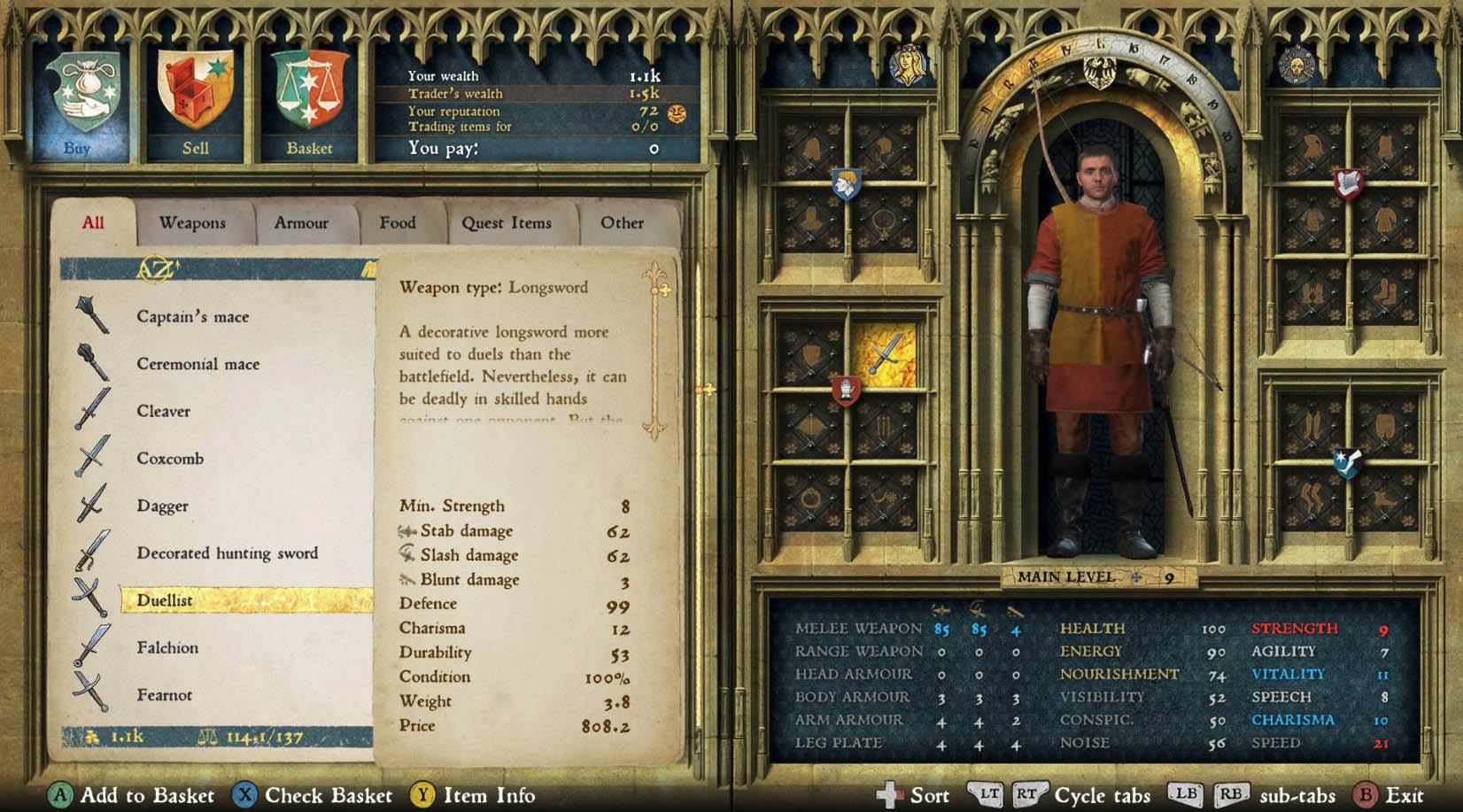 Polearms have the longest reach of any weapon in the game, and deal particularly good Stab and Slash damage and scale with Strength. As with other weapons their scaling varies based on the weapon, but is somewhere around 2% damage per point.

These weapons cannot be stored in your inventory, but can be picked up and wielded whenever you need a long-reaching weapon. You can usually find them in Armories or places where Guards frequent. 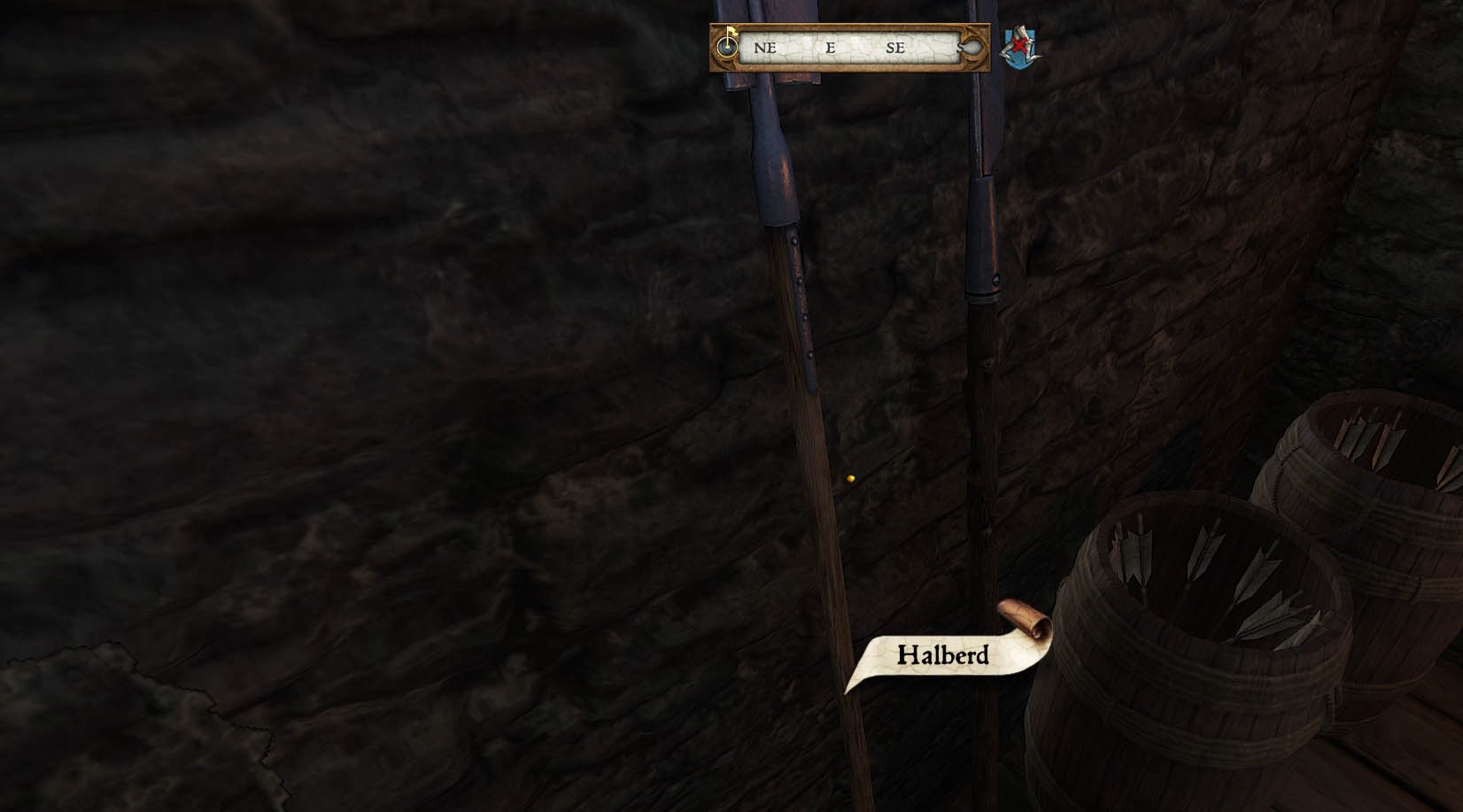 Halberds and Polearms have exceptional damage but high requirements. You can find them, usually in Armories around castles, but you cannot store them in your inventory.

Shields are useful in blocking because they not only use less Stamina, but also spare your weapon’s durability by taking the damage it would instead. Shields come in all different shapes, sizes and colors and require a modest amount of Strength to use.

Using a Shield makes it nearly impossible to pull off combos, which is one of the reasons it is advised with Axes and Maces that don’t have many to begin with. In short it’s the ideal tool for the defensive player, and can really help keep you alive when facing multiple enemies. 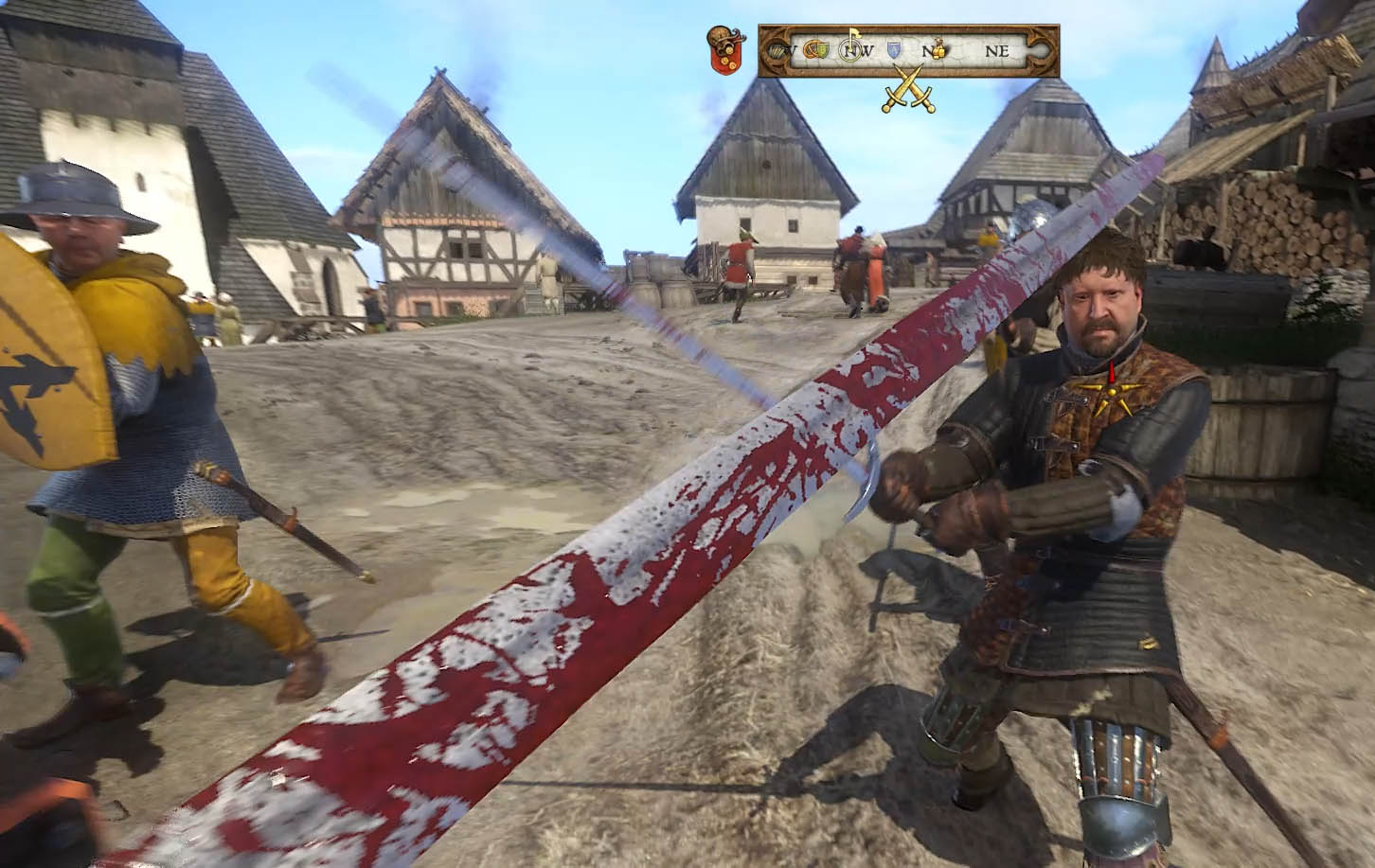 Shields are useful when facing many opponents at once.

Stay tuned for more coverage of Kingdom Come Deliverance through out February and be sure to check out our other Guides.