The Middle Ages, Knights, Bohemia; at first glance it sounds like a dream come true for RPG gamers, but what is it really? Has the hype surpassed the actual game? In this article we explore the labor of love that is Warhorse Studios’ Kingdom Come: Deliverance, a game that has been years in development, and has created a buzz for its unique take on an RPG. Let me just go find my armour and sharpen my sword, because where we’re going, we’re going to need it… 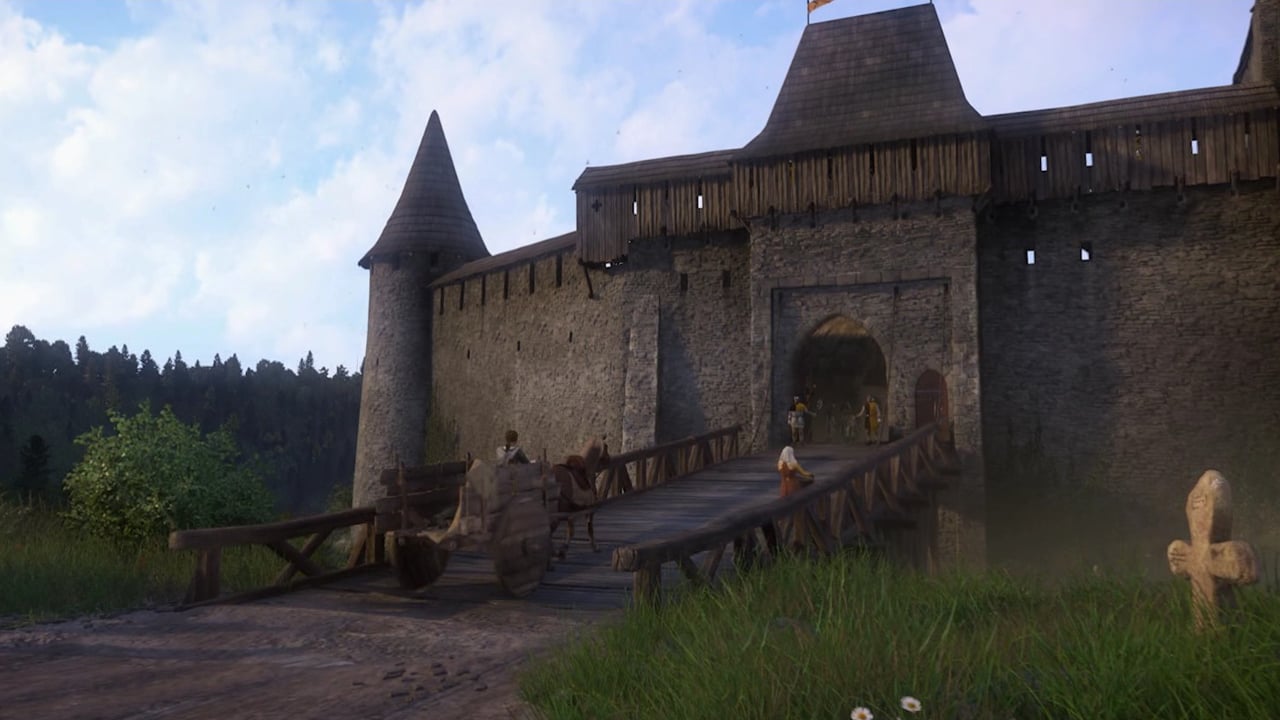 A familiar site in Kingdom Come Deliverance, as castles abound.

Kingdom Come Deliverance takes place in the early 15th century Bohemia, modern day Czech Republic, where players take the role of a young man named Henry (a Blacksmith’s son) during a time of war and strife. The land is torn asunder by supporters of the King Wenceslas IV and the invading force of the would-be usurper Sigismund of Luxembourg (his brother), and you are just a commoner caught in the middle.

It is a time of Knights and Chivalry, duty and honor, and of courage and bravery. And even though you are a mere mortal compared to some of these legends of history, Warhorse does a good job of inserting you into a position where you can influence events to a varying degree. The game’s story is not only extremely well written, but unfolds in a way that unexpectedly draws you in and takes hold. Sometimes after watching a cinematic I would find myself sitting closer to the screen or with my hand over my mouth without even realizing. And a number of times I had goosebumps because I was moved by what was happening, and the animations and acting were so good I felt as though I was watching a movie. 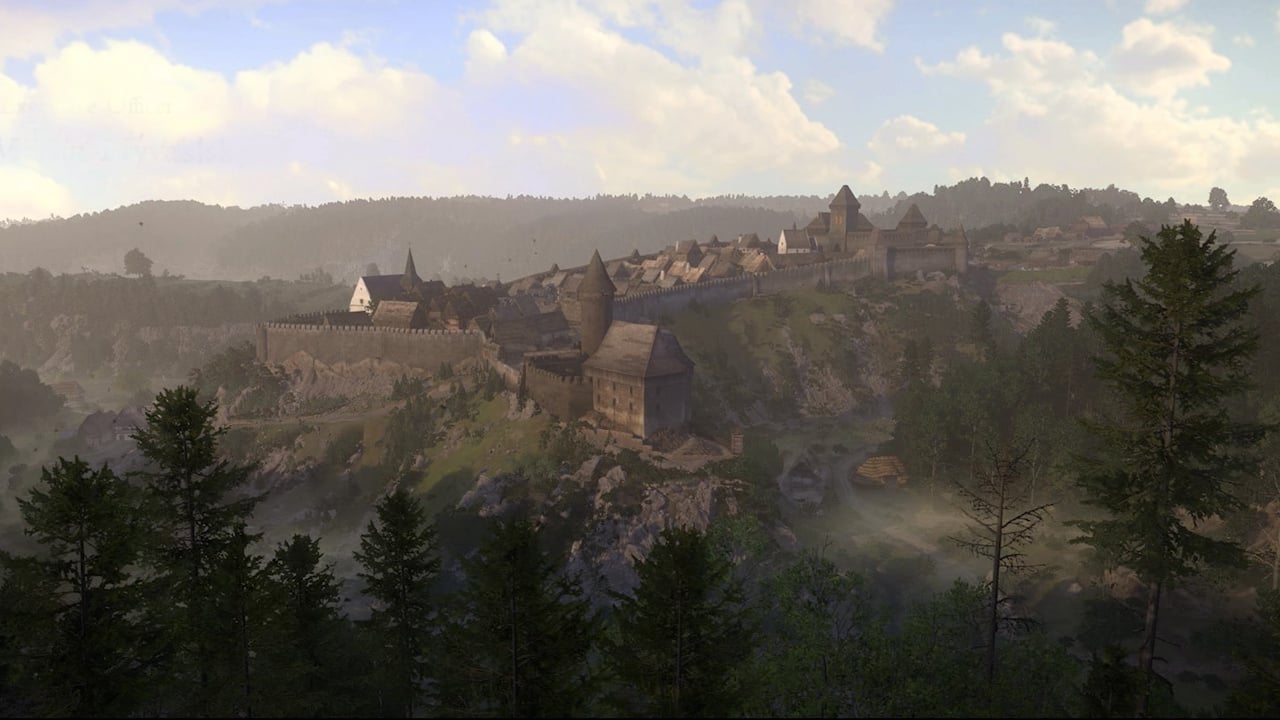 Skyrim ain’t got nothin on these castles.

The land is green, lush, vibrant, massive and extremely detailed! If you remember how it felt to explore Oblivion or Skyrim for the first time, Kingdom Come Deliverance has replicated that, only with enhanced visuals and a bit less of the “wonder” because of the lack of fantasy elements, if only slightly less. After all, you get to explore castles and ramparts, go hunting in the woods for wild animals, hop on your horse and go for a ride in a storm or in the bright sunshine. Or you can even stop at a bath house for some much-needed “relaxation” What more could you ask for?

Story and Setting are the strongest aspect of the game, which may come as a surprise to many, because the game is touted as an “open world sandbox RPG”. As good as Skyrim and Oblivion are, it wasn’t the story they presented that kept me playing, but the freedom and size. In Kingdom Come Deliverance, Warhorse has not only delivered a massive game in that vein, but has somehow managed to incorporate the story telling of a Dragon Age or Witcher game inside of it as well. Impressive to say the least.

The gameplay of Kingdom Come Deliverance is overwhelmingly complicated, and difficult to sum up in a review, but at it’s essence it’s a “real” role-playing game. What exactly do I mean by that? I mean to say that you actually play the part of the character, Henry, and make decisions within the scope of things Henry could do. Much like Geralt in The Witcher, often your choices are not what “you” would do, and you are choosing from what someone else might do (Henry). This makes for an intriguing mix of freedom, and linear gameplay that I don’t think I’ve ever seen in a game before, because KCD takes it to another level of realism.

You must take the night watch on guard duty or go on patrol (because Henry would). You have to meet people at certain places at certain times, and if you don’t there will be hell to pay. Unlike Oblivion or Skyrim, where you can just ignore “real life’ and set about doing whatever you please, you simply can’t do that in Kingdom Come Deliverance. You must operate within the quests that are set upon you; quests which demand your attention and action, and find the freedom to do the things you want in between or on the way. If this sounds tedious or restricting, I totally understand, and I might even agree with you if it were not for the brilliant manner in which the storytelling is done. 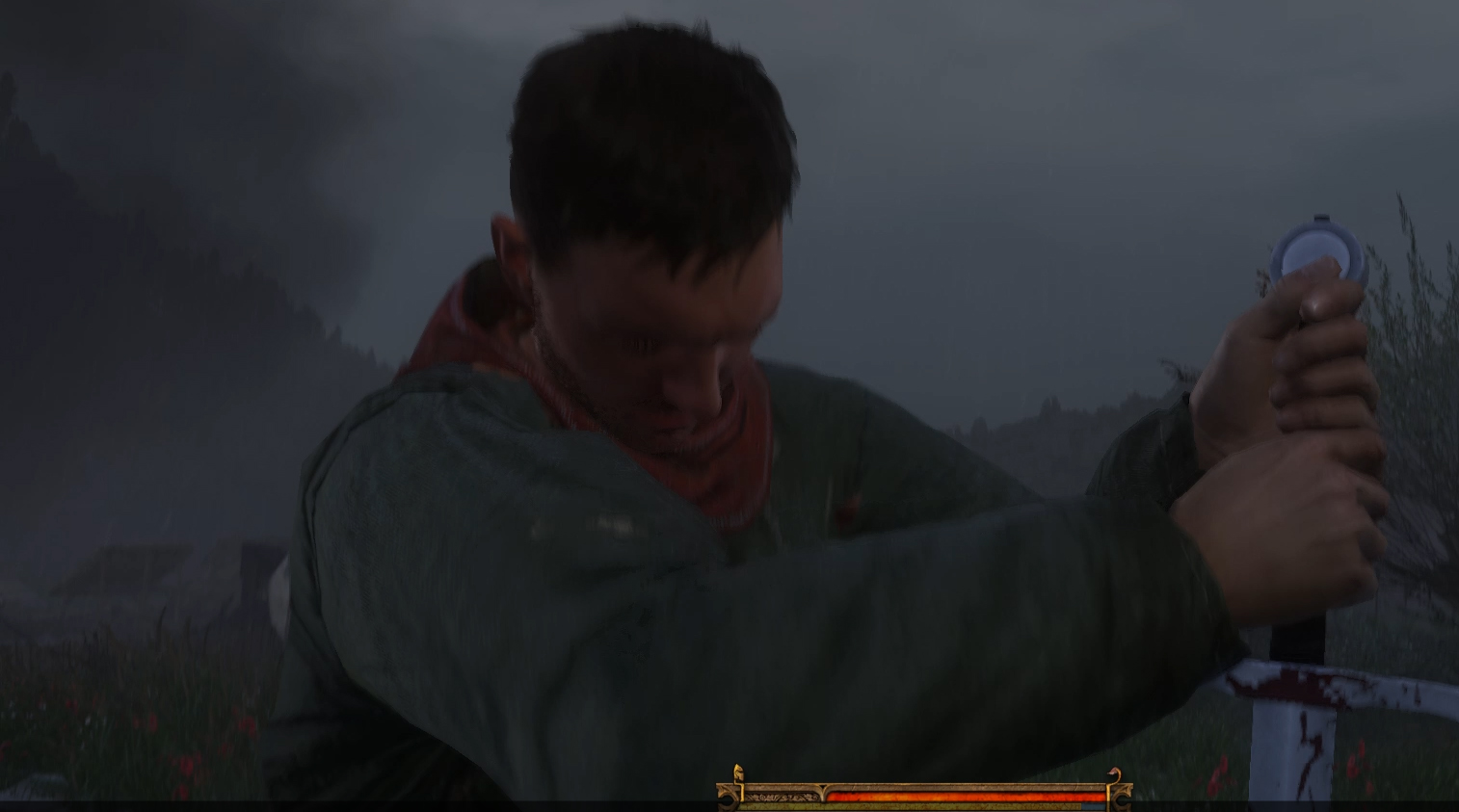 You kill the shit out of that bandit Henry!

There is traditional character development in terms of Stats and Skills that increase as you use them, again much the way Skyrim or Oblivion works. Fighting increases your Strength, Agility, Warfare and whatever weapon type you are using. Having increased skill not only means increased damage in combat, but faster reflexes, shorter attack times and more time to react. You can also be trained in Skills from certain characters in the game for modest amount of gold.

Combat is at first glance done in a extremely strange way and may put off people who have watched streams or who have seen gameplay (especially of the early areas). When you first start out you suck at sword fighting, I mean really badly. Indeed the first person you can fight will kill you EVERY time, no matter how good “you” personally are, because Henry is not. Throughout the course of the game you unlock techniques, much the way you would in an action game like Darksiders, that makes combat much easier and more importantly, much more fun and interesting. If you don’t feel like a badass “Knight” after your lesson with Captain Bernard then I’ll eat my hat. 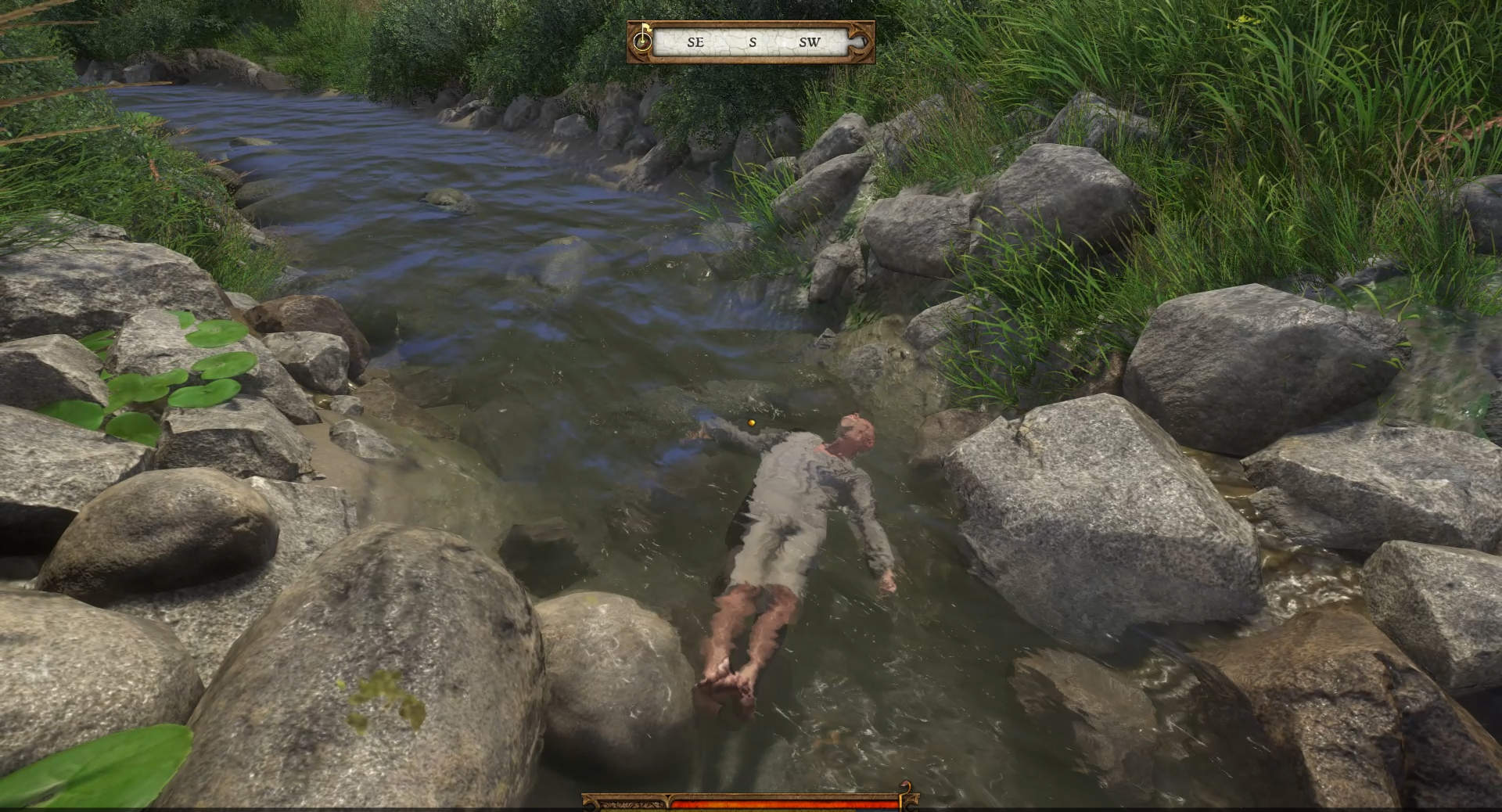 Questing is handled in much the same way as it is in most RPGs. Meaning, go here, help this person or do this or that. However, there is much more freedom to the manner in which you can complete them. For example if you need to get an item from someone you can buy it from him, steal it from him, kill him and take it, try to get him to gamble it on a game of dice or perhaps even do something in exchange. While not every way you can think of in real life is present, many many are, making you feel a sense of accomplishment that you completed the task at hand your way.

As mentioned, the gameplay of KCD has so many facets it’s impossible to cover them all in a (somewhat) brief review, but I expect this area to be one that players either love or hate. This is “hardcore” role-playing and that sort of gameplay is not for everyone. Many modern gamers like the more fantastical style of most video games, where they can do things they very much cannot in real life, and I fully expect there to be some disappointment. However, Warhorse has been very clear about what sort of game this is from the start, so I cannot help but feel they are not responsible for that.

The music in Kingdom Come Deliverance is not mind blowingly good, but it’s very strong and solid. It does a good job of setting the mood of the game and you never seem to “notice” it, except when it enhances a scene, which I always find to be a good indicator. I don’t think players will have any complaints about this particular aspect.

Voice acting, while not as good as some games, is well above the industry average. It’s done so well that you almost never seem to have any attention on it, which laid to rest one of my biggest fears. Most of the voices are fitting of their particular characters and most sound genuine and natural. An added plus here is that the facial animations are good enough that you’re not just sitting there looking at mouths that don’t seem to match what people are saying, but are instead listening, as you would with a real conversation. 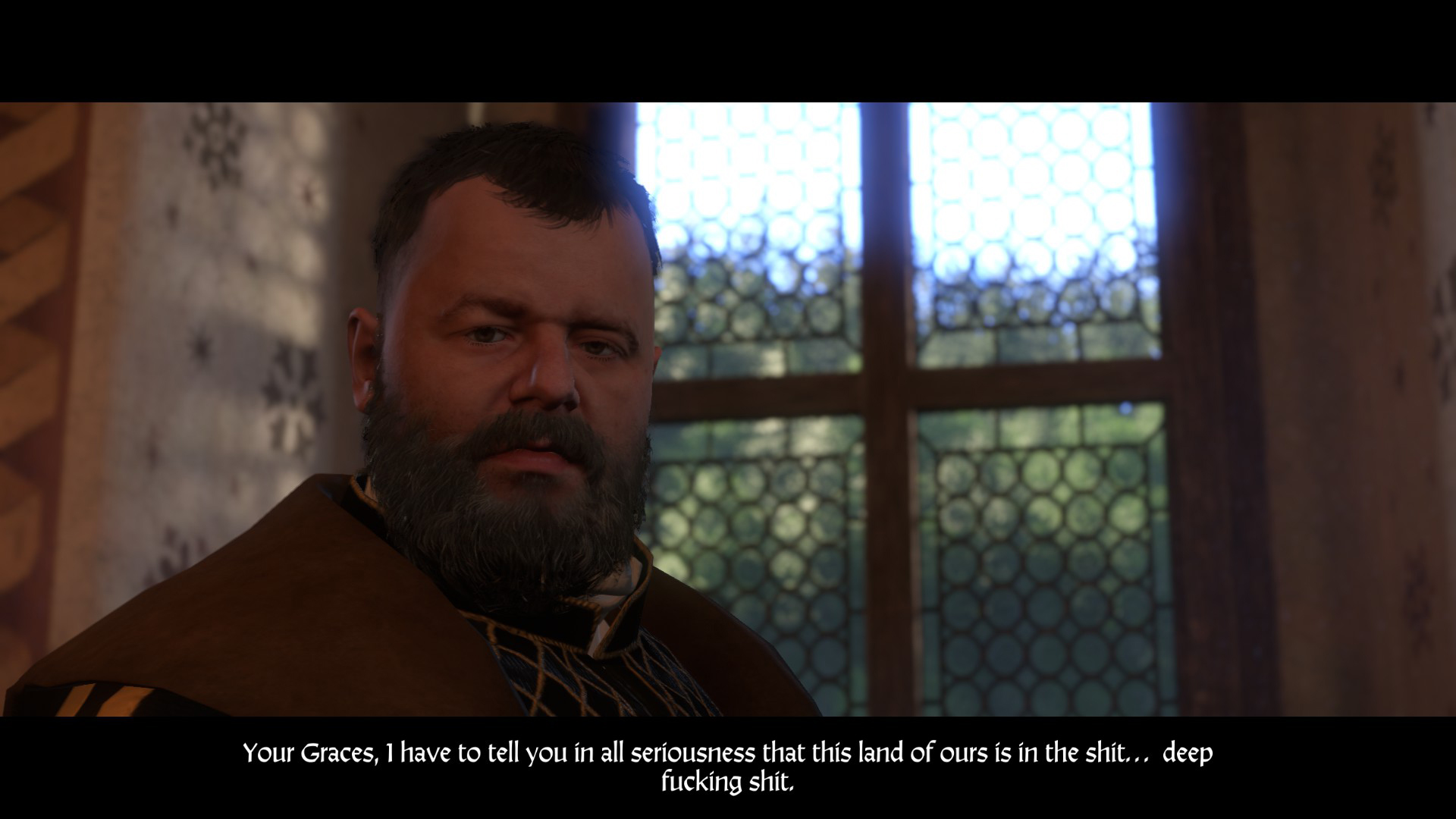 And he was not wrong…

Sound effects are brilliant and really help to place you in the time period. From the clanging of the blacksmith’s hammer, to the horseshoes clopping along behind you, or even the sound of the rain. Everything very much feels as it should, leaving you to focus on the task at hand without too much distraction.

Visually Kingdom Come Deliverance is a feast for the eyes, and you can spend quite a bit of time just gawking at the castles and countryside. As I played the PC version on a fairly decent gaming rig, I was able to play the game at max graphics, and it looked gorgeous. Not quite the Witcher 3 gorgeous but close. Unfortunately, however, I was not able to get a solid 60 FPS with my equipment, though it never dropped below 30. This was a bit disappointing. 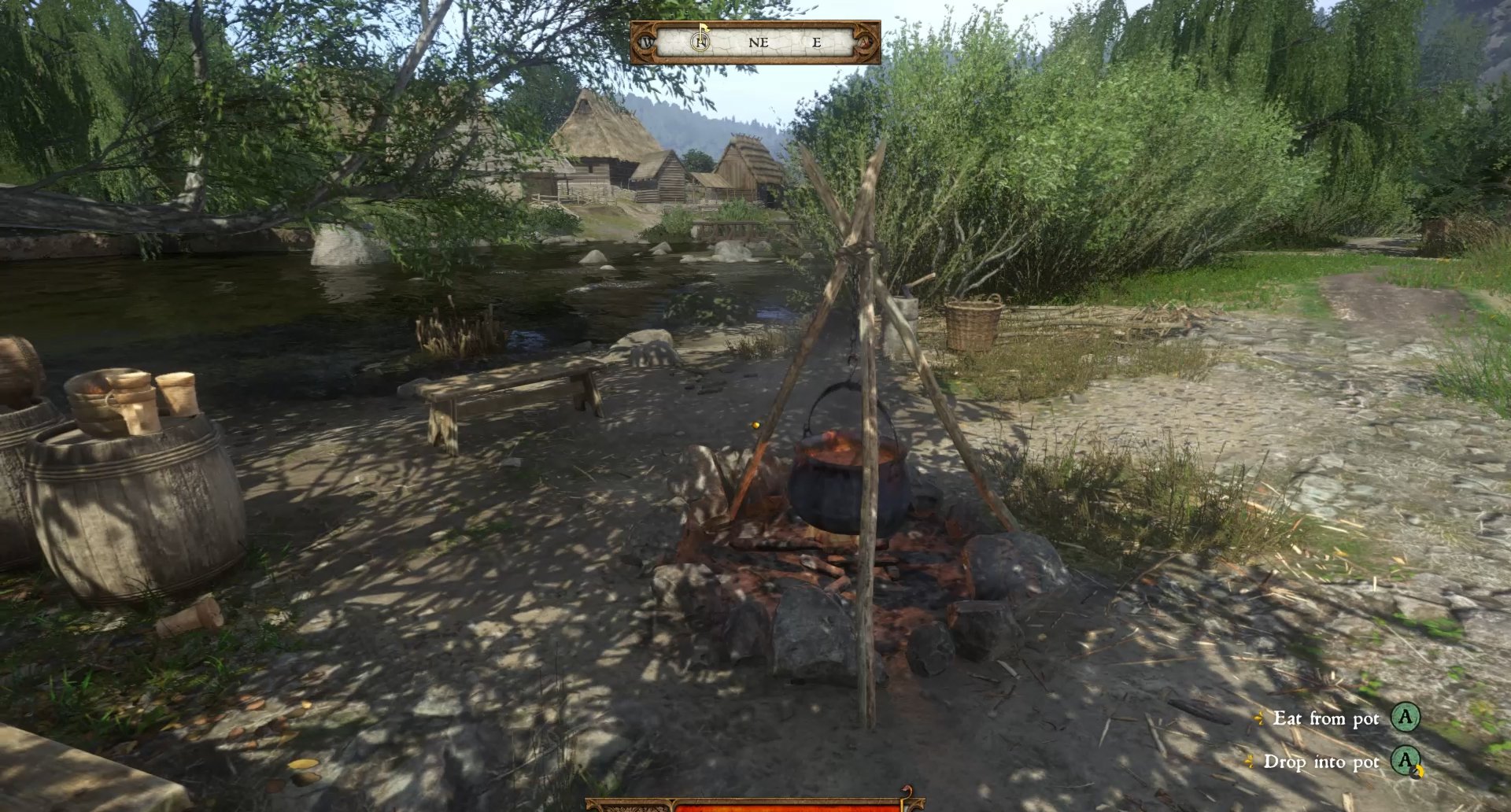 Scenes like this are common within the game and make wandering around fun in its own way.

If the setting and storytelling are the best thing about Kingdom Come Deliverance, then the audio and visuals are a close second. You experience the wind and the rain, the sun and the leaves falling in extremely high detail. So much so in fact a friend came over while I was playing, and was like “That looks amazing! The right amount of density and foliage, which is something you don’t see in other games.” I fully expect players to complain about not being able to get 60 FPS without a top of the line rig, and I was a bit disappointed myself, but aside from that I have no complaints.

Kingdom Come Deliverance is a much needed breath of fresh air for the gaming industry, and frankly one that many players will overlook, much the way Demon's Souls originally was. It's challenging, cryptic, vague and there are simply too many questions without answers for the average gamer. However, if you can stay the course and persist through the unknown, understanding that you will get the answers if you carry on, you will find a very special and personal experience that few games offer.

Only three games to date have inspired me to pick up a book and actually read about the events of the game I was playing. The first was The Witcher, the second was Nioh and now the third is Kingdom Come Deliverance. Warhorse may not win any awards for this title, but they have established themselves where it matters most, in the hearts of gamers with a solid performance. They have earned themselves a warm following, and I can't wait to see what they do next. Now pardon me good sir, I have to see a bar wench about some ale.