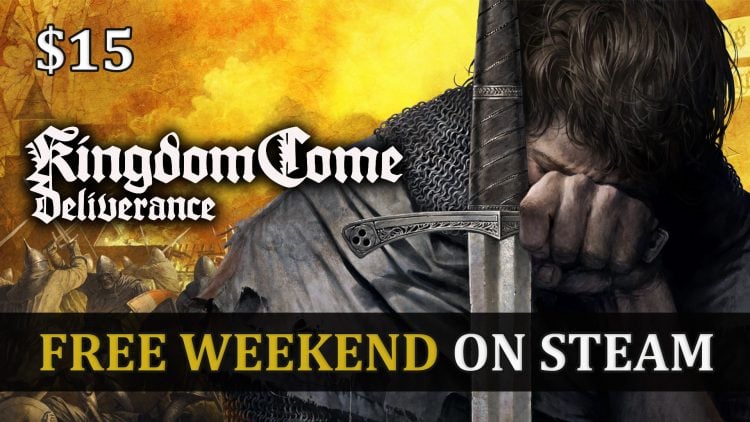 You can catch Kingdom Come Deliverance for free on Steam this weekend and some great deals as well.

If you were hoping to try out the fantastic medieval RPG Kingdom Come Deliverance now you can as the title is free to play this weekend until September 9th. If you want to continue your adventure after testing it out you can also get the title 50% its original price, that’s $14.99 only. Or if you want the base game and all the released DLC you can pick up the Royal Edition for 25%, that’s $29.99. Or if you already own the base game and looking to pick up some of the DLCs each are now 25% off.

Kingdom Come Deliverance follows the adventures of a blacksmith called Henry, as he navigates the violent civil war. As he watches powerlessly as his village is ransacked, friends and family slaughtered, he must flee narrowly escaping being attacked himself. He will attempt to avenge his parents’ deaths and help fight back against the invaders as part of the resistance under the service of Sir Radzig Kobyla.

? FREE WEEKEND ? Play Kingdom Come: Deliverance for free until September 9th and save 50% when you buy the game!https://t.co/fLkwH8TJRh…#SteamDeals

You can also check out the outline of each DLC according to Deep Silver:

Kingdom Come Deliverance is available to play on PC, Xbox One and Playstation 4.

If you’re venturing into the world of Skalitz be sure to check out our Kingdom Come Deliverance wiki for all your knightly needs. For more RPG news be sure to read next Darksiders Genesis Trailer “Introducing War” and Divinity Original Sin II – Definitive Edition Releases On Switch Today With Shared Cloud-Saves With Steam.