King Arthur: Knight’s Tale is only a few months away from its full release date this February for the PC, Xbox Series X|S, and PlayStation 5. But before that, we’ll go through the most recent Patch v0.1.0. In this King Arthur: Knight’s Tale – December Update (PvP, Balancing, & More) article, we’ll discuss the major highlights including but not limited to the Vitality, HP and skills balancing, building upgrades, improved Injury System, leveling changes, and the new PvP mode. We’ll also talk about what you can expect when the game comes out next year. There’s so much to cover in this December Early Access Patch so let’s dive right in!

For this patch, we’ll first discuss how Vitality, HP and Armour now function, followed by Skills balancing and then Camelot building upgrades. What’s good about the recent update is you can still load your previous saves so you don’t necessarily have to start from scratch.

How Vitality, HP and Armour Works

Prior to the recent patch, the base HP was significant in that it acted as a means to protect the Hero’s actual health or Vitality. But this has since been removed, and will instead be added only if you have the necessary Armour equipped and skills upgraded, making gear much more essential to survive in Combat. To compensate for it, Vitality has been boosted across the board. The intention is to detract from the overwhelming feeling of dread when you only have Vitality available, which makes you susceptible to being one-shot by enemies right away. 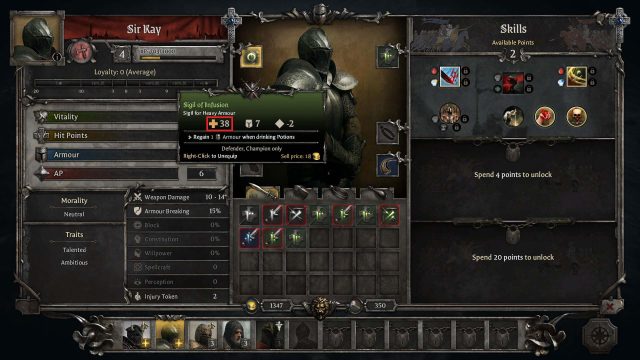 You also need to be careful when it comes to positioning Ranged Heroes like Lady Dindraine to avoid taking fatal damage.

Furthermore, the Armour Breaking capability of both Hero and enemy Weapons and skills have been reduced to balance combat. This means that it will take more time to break through their respective HPs, thereby maintaining the challenge in every encounter. In particular, the Power Attack Skill’s Armour Breaking value has been reduced by half from 30% to 15%. 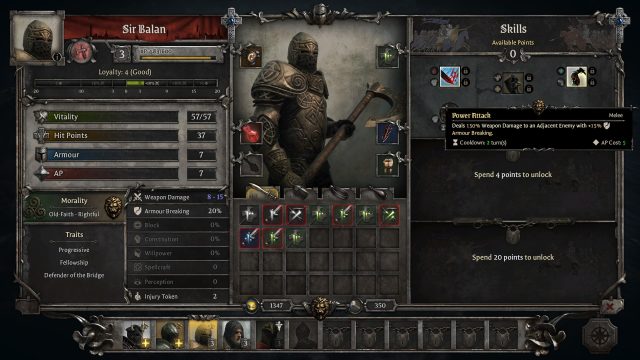 Skills have been revamped accordingly for all Heroes and enemies by increasing and decreasing damage values and modifying their corresponding Action Points (AP) cost. For instance, Lady Dindraine’s Fire Arrow Skill has received a Weapon Damage buff from 50% to 70% while the Sage’s Inspire Skill will be activated immediately at a cost of 3 AP from 4. Additionally, the Bless Skill will now be able to deal more damage at 40% but this is restricted to melee damage only so you’ll have to strategically position yourself next to the target beforehand. 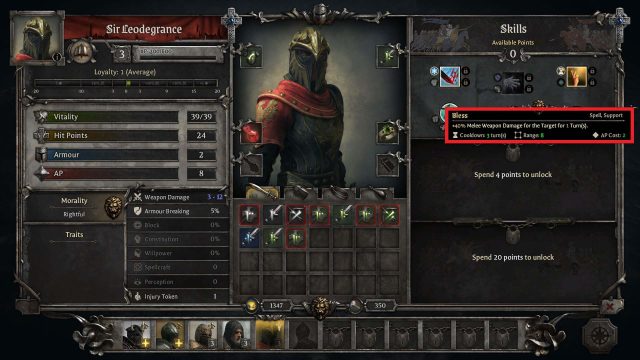 With regard to the Vanguard Class’s Hide Ability, several changes have been implemented. Going into hiding will no longer be free since you’ll need to spend 2 AP to do so. However, moving while in this state won’t cost double the AP anymore so it’s simpler to manage. To reveal yourself, you either have to activate another skill or be discovered by an enemy. And finally, tiles, which can alert enemies about your position, will have warning indicators so you don’t select them by accident if you intend to remain hidden. 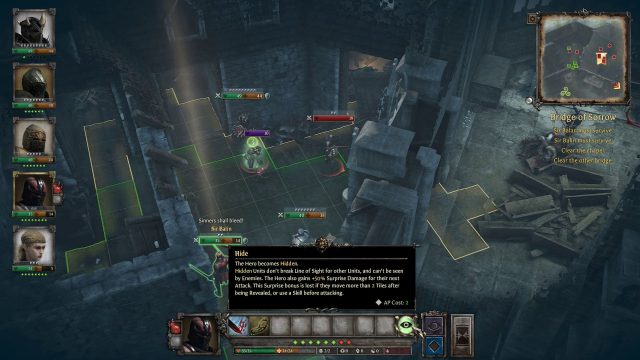 Due to the feedback received by Neocore Games, the Knight of Midnight boss encounter in Act 1 will now be more challenging for lower difficulties since he’ll be able to activate skills once again after the second cutscene. So gone are the days where you can pelt the knight down with your ranged abilities!

One of the best features of King Arthur: Knight’s Tale is being able to enhance all of Camelot’s Buildings to improve and fully restore your Heroes after completing certain Missions. Except for the Crypt, most building upgrades will cost a higher amount of gold, rather than resources. However, structures like the Merchant’s Tradepost that reduce the cost of items, require you to pay using Morality Points acquired from participating in Events. Let’s go through some of these changes. 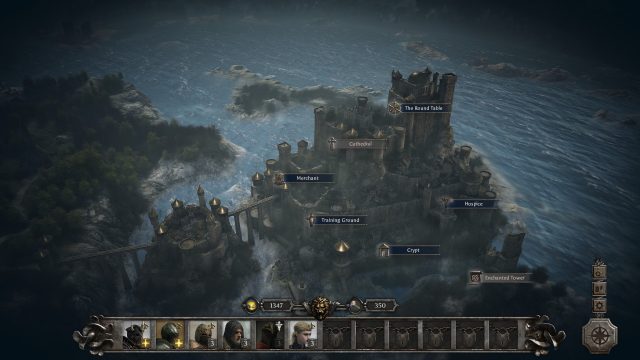 In The Round Table, a small cosmetic change includes renaming the Court Titles upgrade, which improves your Heroes’ Loyalty towards you, to “Famous Titles: Court Titles grant +1 Loyalty.”

In the Hospice, you can now unlock additional upgrades after gaining access to the rest of the Hero Slot Expansions. For Expansion 1, you’ll be able to set aside a Hero to become an Apprentice Herbalist, permanently granting them a bonus to Vitality. If you want to increase this buff even more, then you ought to amass 4,000 gold to get a hold of Master Herbalist Slot, providing you with +4 Vitality instead of +2. 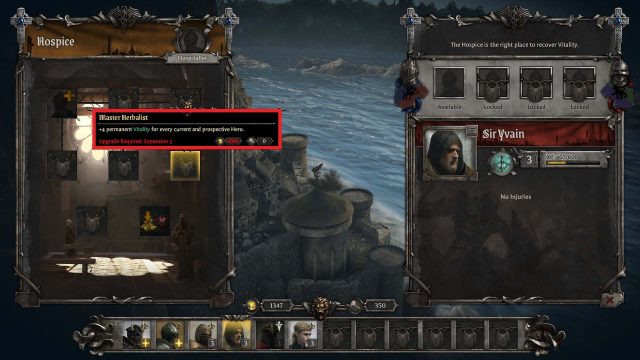 Now concerning the Merchant building, there’s a new Armoursmith upgrade to procure additional Armour. It is, however, pretty costly at 1,000 gold and resources each.

When it comes to the Training Ground, you can respec your Heroes’ skill point allocation by spending gold and leaving them there for 1 mission. This is a good bargain since it provides flexibility in order to test your characters’ best skills. Additionally, you’re able to permanently buff their HP by taking Basic and Advanced Physical Training. 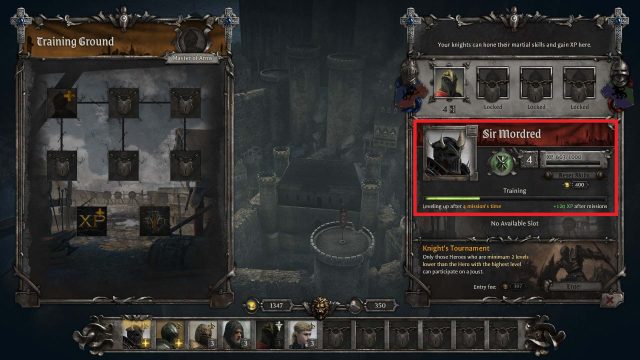 You should remember that when you bestow building titles to Heroes, say if one becomes a Master Herbalist, they will no longer be eligible to hold on to a Court Title as doing so will give them too many benefits. So you need to carefully plan out who will become masters of whichever upgrade, while determining the characters who should receive Loyalty points.

In the previous versions, Heroes were injured based on the number of hits that landed on them so if they were attacked by weaker enemies who inflicted lesser damage, they would still be gravely wounded. This time around, their Vitality has been divided into 5 sections to determine the types of injuries they receive. If they take more than half the damage, then their light and severe injuries ought to be cured. 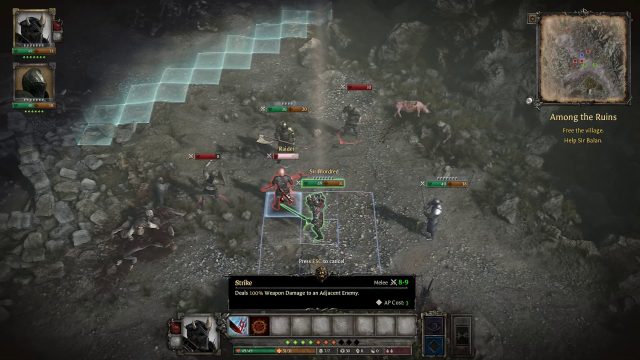 Besides this, the Curse System has been completely removed such as “Curses and Curse tokens” to simplify the Injury System because both of them inflict harmful status effects anyway. On top of this, Weakness, Wither, Suffocation, Double Vision, and Blindness have been added to the list of injuries you’re vulnerable to. You’ll be able to keep track of them since they’ll appear in the mission results.

Due to the removal of curses, the Enchanted Tower will now function differently as it will become a Relic shop to acquire rare Relic items instead. Converting these provides you with powerful enchants and extra skills as opposed to the ones you obtain from missions but you need to reach a certain level first. Like the Merchant, the selection of Relic items will constantly change after completing several quests. 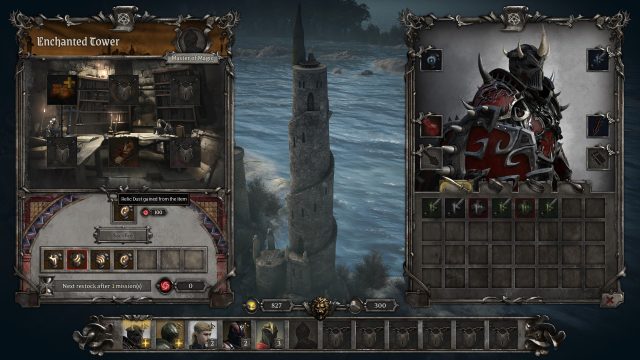 Leveling up all of your Heroes has never been easier, and now bringing along low level characters in low level missions allows them to catch up with their higher level counterparts. This makes it possible to rotate them accordingly since they’ll more or less be on equal footing. It also lets you choose the right Heroes for challenging quests given their strengths. 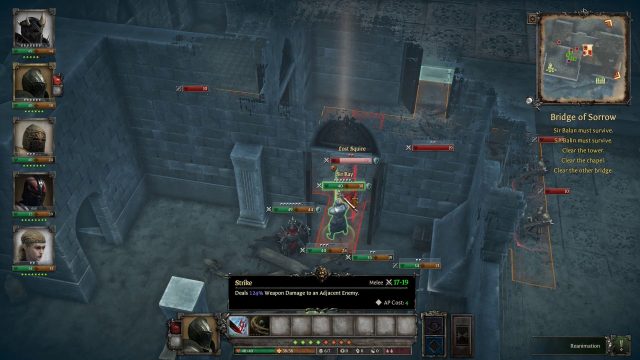 When it comes to items, you can expect to see improvements to previously weak Relic items while Common weapons will no longer have potent enchants like before. Additionally, weapon rarity plays a larger part due to the damage range associated with them. For instance, Common weapons will have a wider range compared to Uncommon ones, which are more accurate and grant extra static damage.

Combat in King Arthur: Knight’s Tale has also been tweaked in terms of the ranged characters, debuffs, and health potions you pick up along the way. Ranged units won’t incur damage penalties provided that the enemies near them are afflicted with conditions like stun or freeze. 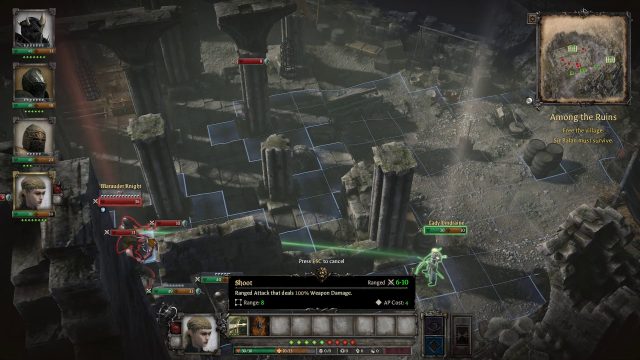 Meanwhile, debuffs won’t stack with one another but the corresponding status effect’s duration will be lengthened. To be able to inflict debuffs using attack spells, the enemy needs to lose a portion of their HP or Vitality. If their Armour is diminished instead, then the debuff won’t be applied, somewhat similar to Divinity: Original Sin 2’s system. On the other hand, you can freely deal debuffs if you were to cast non-attack spells that deal no damage. Additionally, units that are bleeding will suffer from damage over time every time they move on the board.

The number of health potions you acquire is based on the volume that you currently have with you. If you own a low amount of health potions, chances are you’re more likely to come across them. Furthermore, they’re now highly effective since consuming them will remove all of your debuffs. 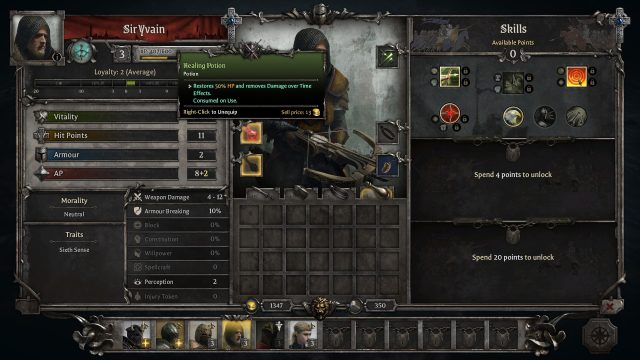 On top of the game’s tactical turn-based RPG campaign, you’ll be able to engage in the optional PvP Multiplayer mode with other players or you can even invite your friends directly via Steam. You have the option to choose from premade parties of 4 or to select every Hero you wish to include in your team. 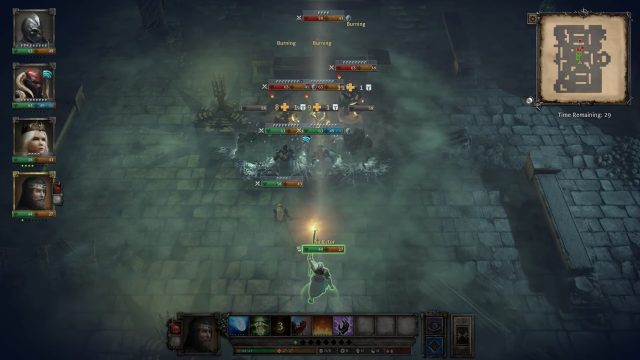 Note that they have more potent skills, which aren’t available in the campaign just yet. New Heroes will also make an appearance in this mode. Lastly, you’ll be able to choose from 3 available maps so far, namely the Catacombs, Forest or Maze.

Morality will play a much bigger role than before. Your Hero’s Loyalty will diminish by a certain amount of points if your beliefs differ from them. If you’re leaning towards becoming a Tyrant but Sir Galahad, for example, is a bonafide Christian, then he won’t remain loyal to you for long. This should result in better replayability, as you won’t be able to use every Knight effectively in one playthrough. 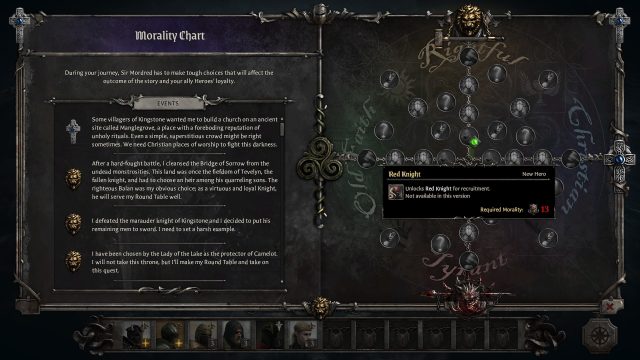 In addition to the numerous changes we’ve discussed so far, graphical enhancements have been implemented such as the vibrant Adventure Map, which is now shrouded in mist to make it look realistic. Navigating the map is easier to do as well since you can simply use your mouse’s scroll wheel to zoom in and out. Moreover, new soundtracks have been added in combat and when you’re traveling from one area to the next. 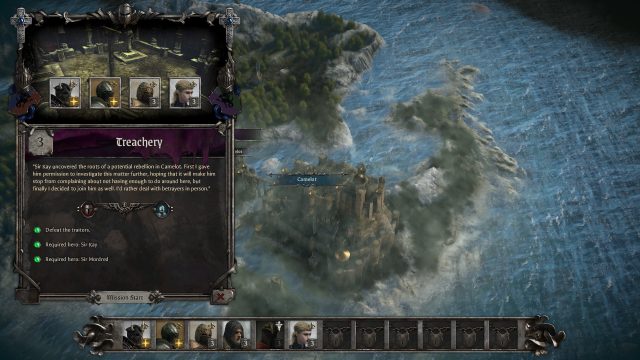 In terms of bug fixes, crash and performance issues, as well as quick camera shifts between enemies at the beginning of specific encounters have been addressed. Also, Sir Tristan won’t be able to use Hide anymore since this ability shouldn’t be available to him in the first place. For the full list of bug fixes, you can check out the complete patch notes here.

What To Expect Next

So what are we going to expect when King Arthur: Knight’s Tale leaves Early Access in February 2022? Once you finish the campaign, you can participate in endgame missions that include challenging monster invasions to level up your Heroes further while collecting higher tier equipment in the process. You’ll also be able to slay difficult bosses like the Great Worm. 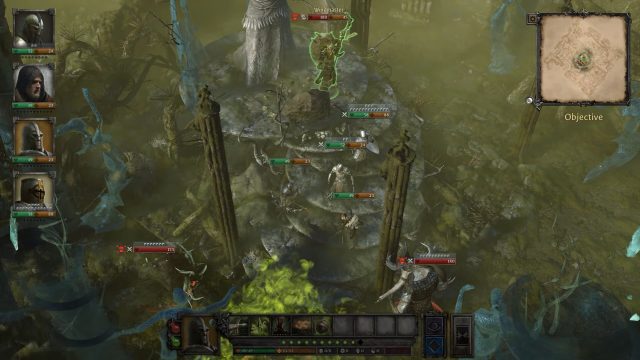 But the updates don’t end there as the developers will also be releasing free content in the form of seasonal updates. New enemy factions such as Romans and ghosts, more bosses, challenges, and new loot will be introduced in the game. You should also stay tuned for upcoming DLCs in the near future.